After a long cold Winter was mostly over-- I say mostly because PITTSBURGH.   Anyway, Spring was teasing us from across the calendar and we had some faint hopes of seeing sunshine when Tesla dropped another local test drive event on the calendar on short notice. 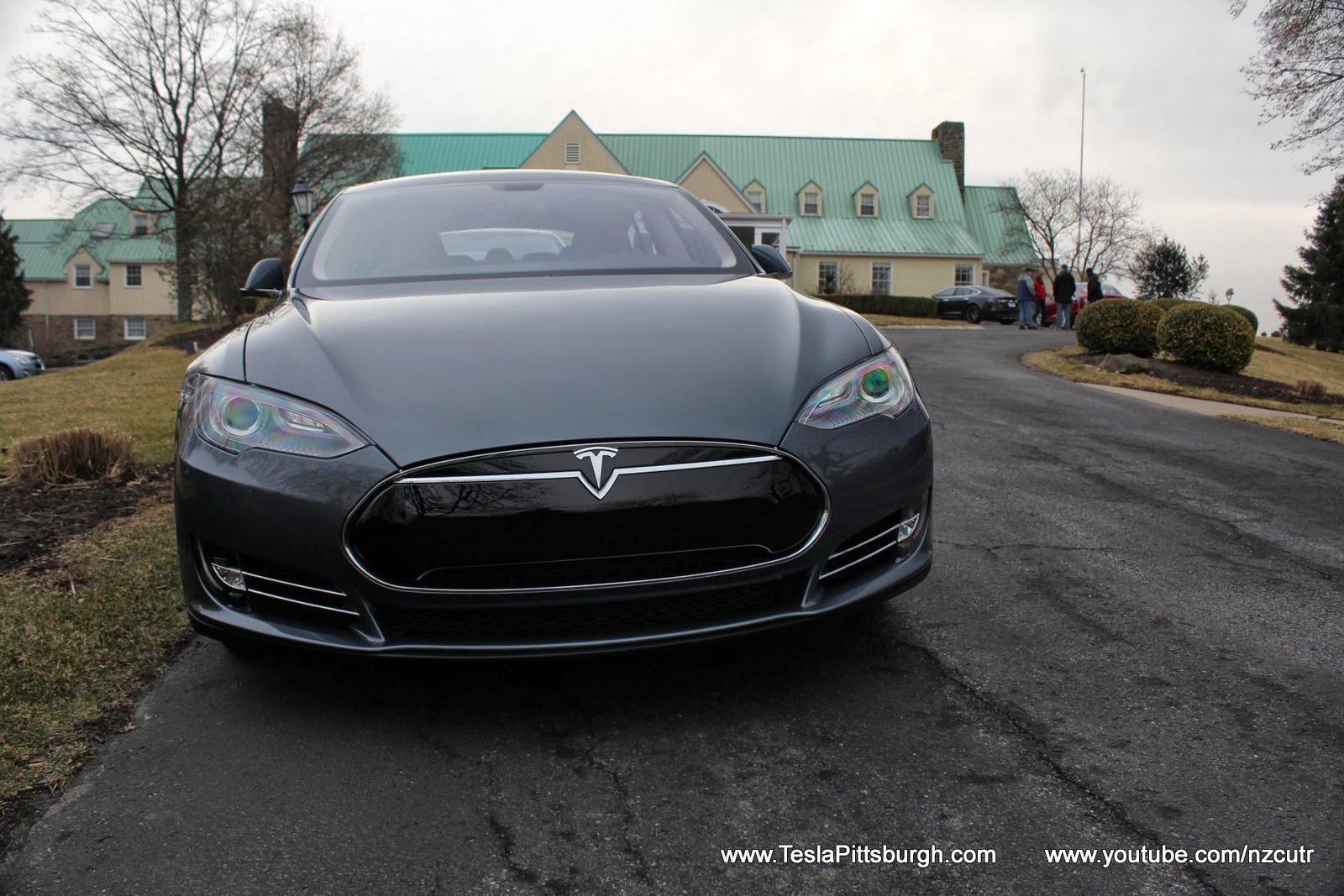 We'd already driven the cars... and done the math...  but decided we'd stop by and check out the scene and maybe they'd bring some interesting news.  We'd still NEVER seen a grey car in person.  Surely there was no harm in just... LOOKING, right?


As you can see from the pictures above and below, our visit with the Tesla team at Shannopin Country Club was INDEED fruitful, finding a beautiful grey car front and center.  Sure, they brought black, white, and red along too but the grey was what we were hoping to see and this one even had a tan interior.  Alice's objections to color combo were finally put to rest.  It looked great-- just enough blue in the grey paint to let the tan get its foot in the door. 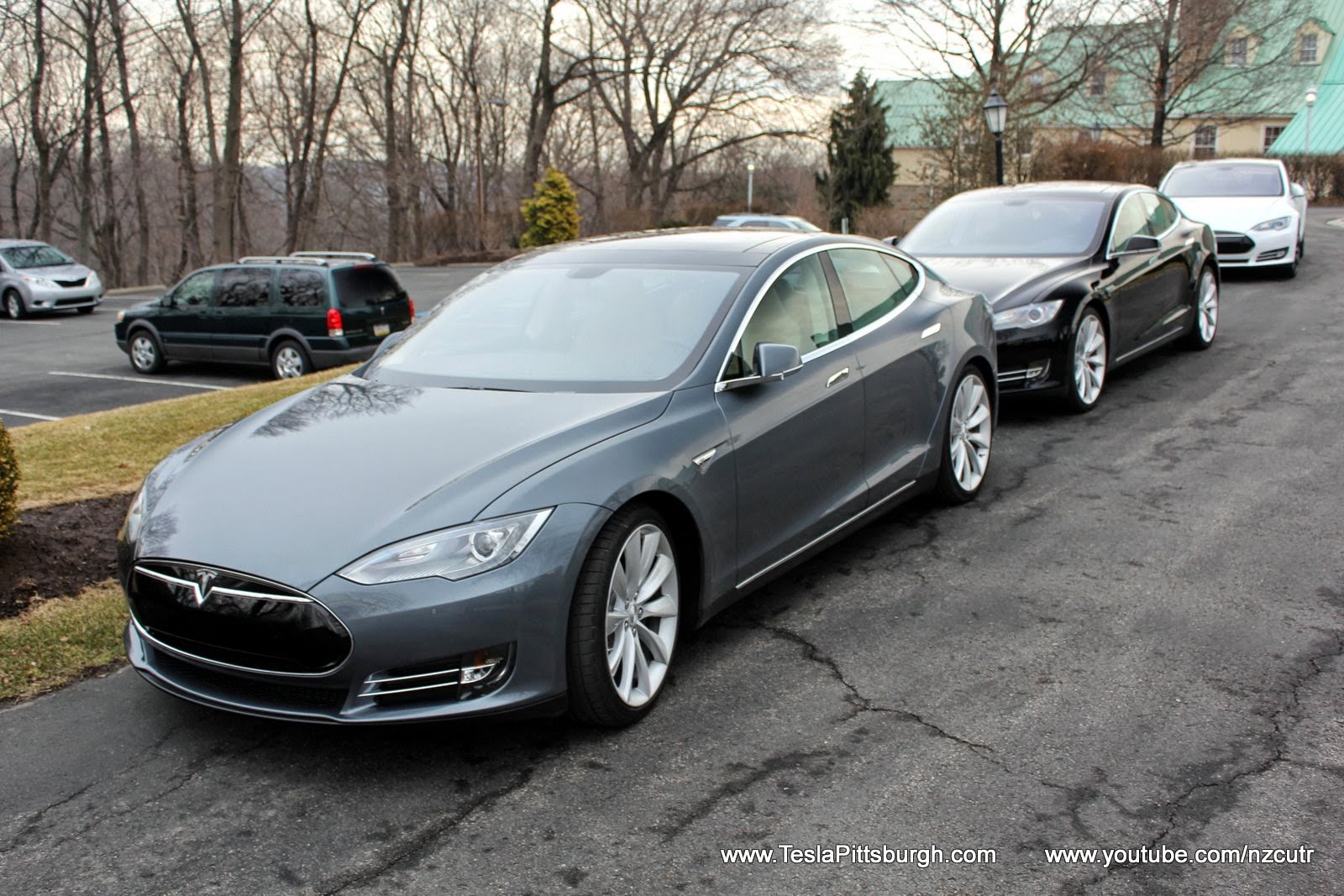 We caught up with a lot of the same Tesla staff we'd met at other events, including Chris Vance, and enjoyed visiting with them.  Tesla was doing well but exposure in Pittsburgh was still an issue and despite Jake's best efforts the "buzz" wasn't around Tesla locally yet.  We also found out that the Pittsburgh service center had been postponed an additional YEAR (though we found out 2 months later that we were bumped back up to 1st quarter of 2015-- due to stronger sales, in part from this event). 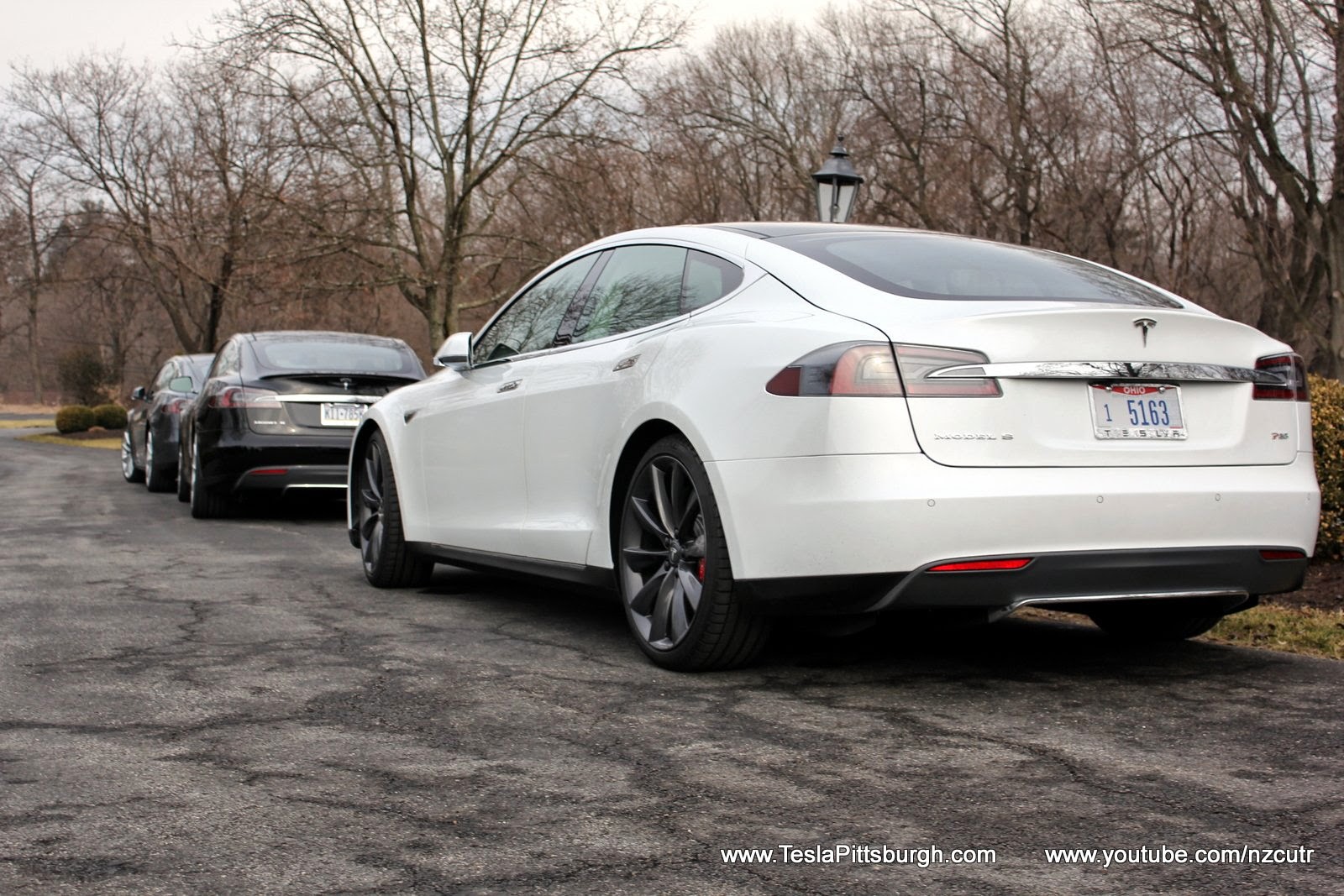 Studying the assembled Teslas, I have to admit that although I'd never feel like it was "my" taste, the pearl white paint with grey wheels/red brake calipers looked really impressive.  The "glow" of the pearl doesn't photograph well but it looked phenomenal in person.  Anyway, we all chatted a while and looked around and in the cars...

Pennsylvania had renewed the state rebate-- albeit diminished -- through June 30.  It was late March.   June 30th was very much within the potential delivery window for cars ordered soon.  REAL soon.   Now, hear me on this, the rebate is NOT a lot of money.  The panoramic sunroof option alone (which we are getting) costs more than the rebate.  That's not the point.  The POINT is that a car delivered June 30th costs LESS than the same car delivered July 1st.  We didn't get to the point of buying a Tesla by ignoring coupons and rebates!  With no expectation of prices to otherwise drop soon and used Teslas suffering little if any depreciation, every discount on a new one becomes significant.

Well now, that changed the equation again.  Talking to Chris about his understanding of the production schedules confirmed that we really had to make a decision within a week.  Any later than that and we risked missing the deadline.  By saying that, he gave us a hard deadline we decided we were going to stick to.  If we couldn't come  up with a firm decision by then-- our "Go/No Go" date-- then we would default to "No Go".  There would be no 2 week delay from deposit to confirmation, this time we were either going straight through or we were not even going to start.  We had one week to decide.

In the meantime, Chris directed our attention to the red beauty you see below.  As you can probably tell from the picture-- taken on a cloudy day, mind you-- it is VERY RED.  At the time this inventory car was available for an amazing price and we debated buying it outright that weekend. 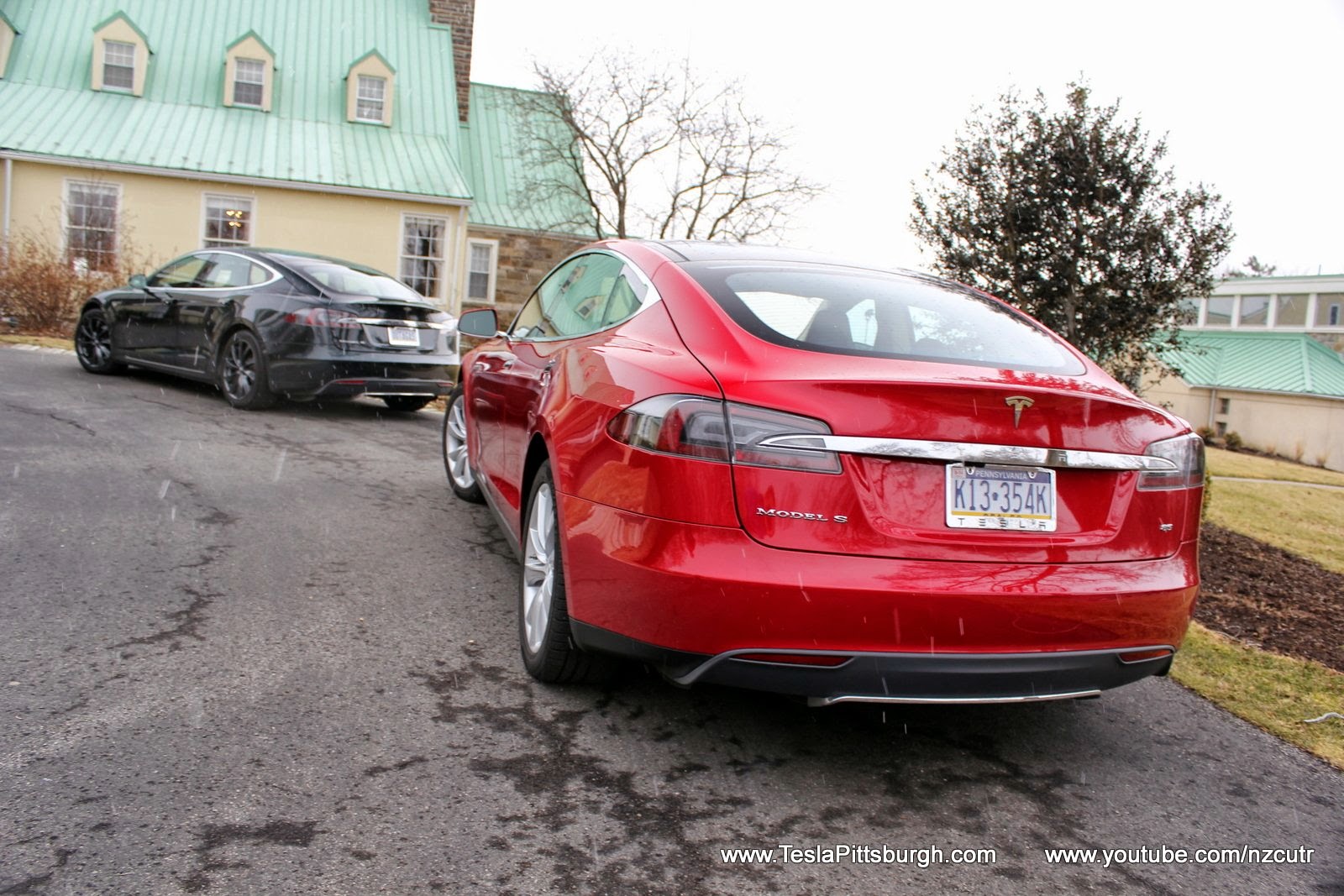 The only real issue it had were the textile seats and piano black dash...  which resulted in an interior that was basically completely black and felt much more claustrophobic than the tan leather and wood dash we wanted.  Even so, Chris warned us that it would sell quick and-- sure enough-- when we stopped by the next day it was already spoken for!  Someone got a GREAT deal on a gorgeous ticket-machine. 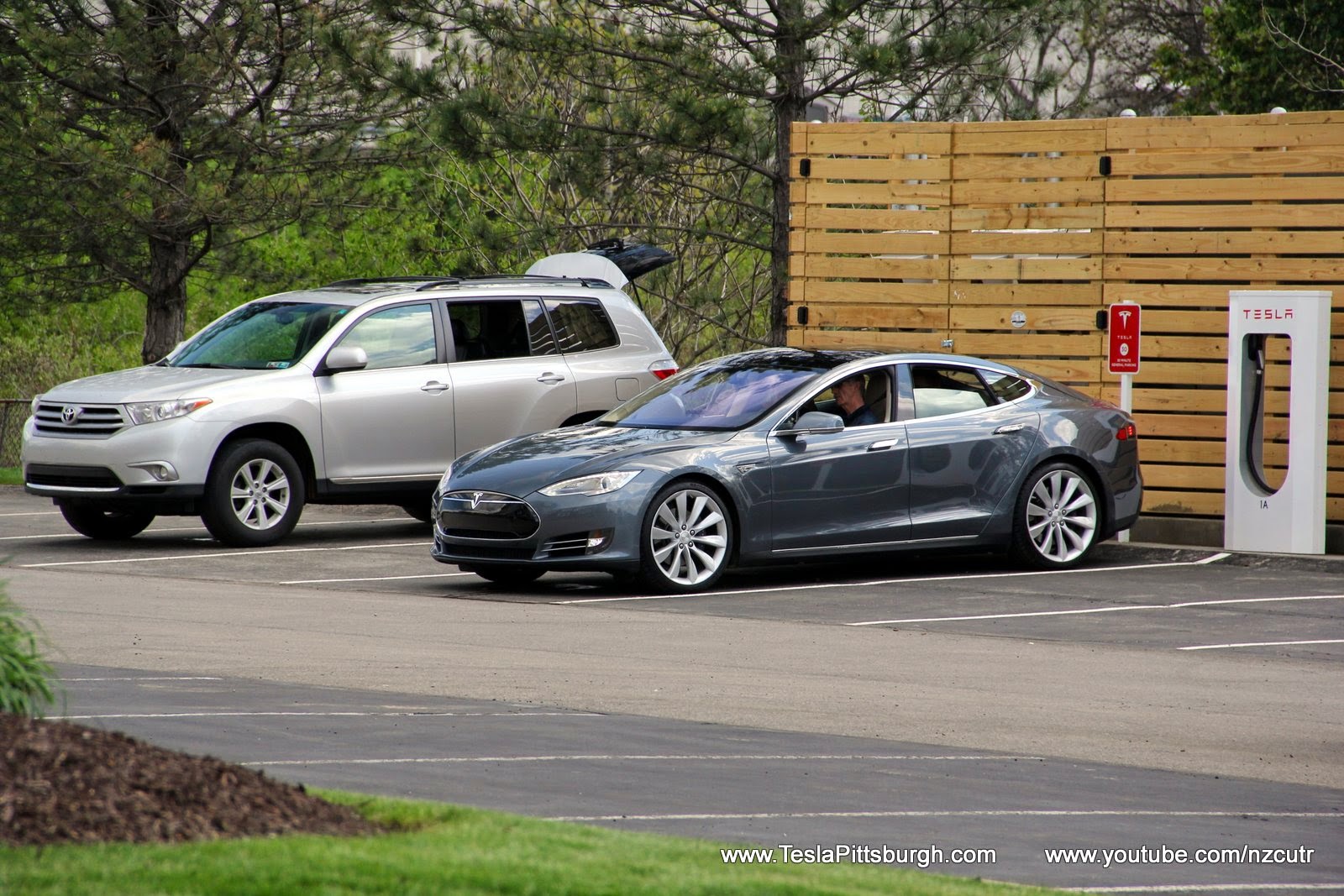 Last month at the Cranberry Supercharger Ribbon Cutting I actually met the new owners of that red Tesla.  You can see the husband behind the wheel of the grey Tesla above-- which is also the same Tesla from the March test drive event at the top of this page.  They were expecting delivery of their car a few days later and he fully acknowledged that he expected to attract a lot of law enforcement attention! 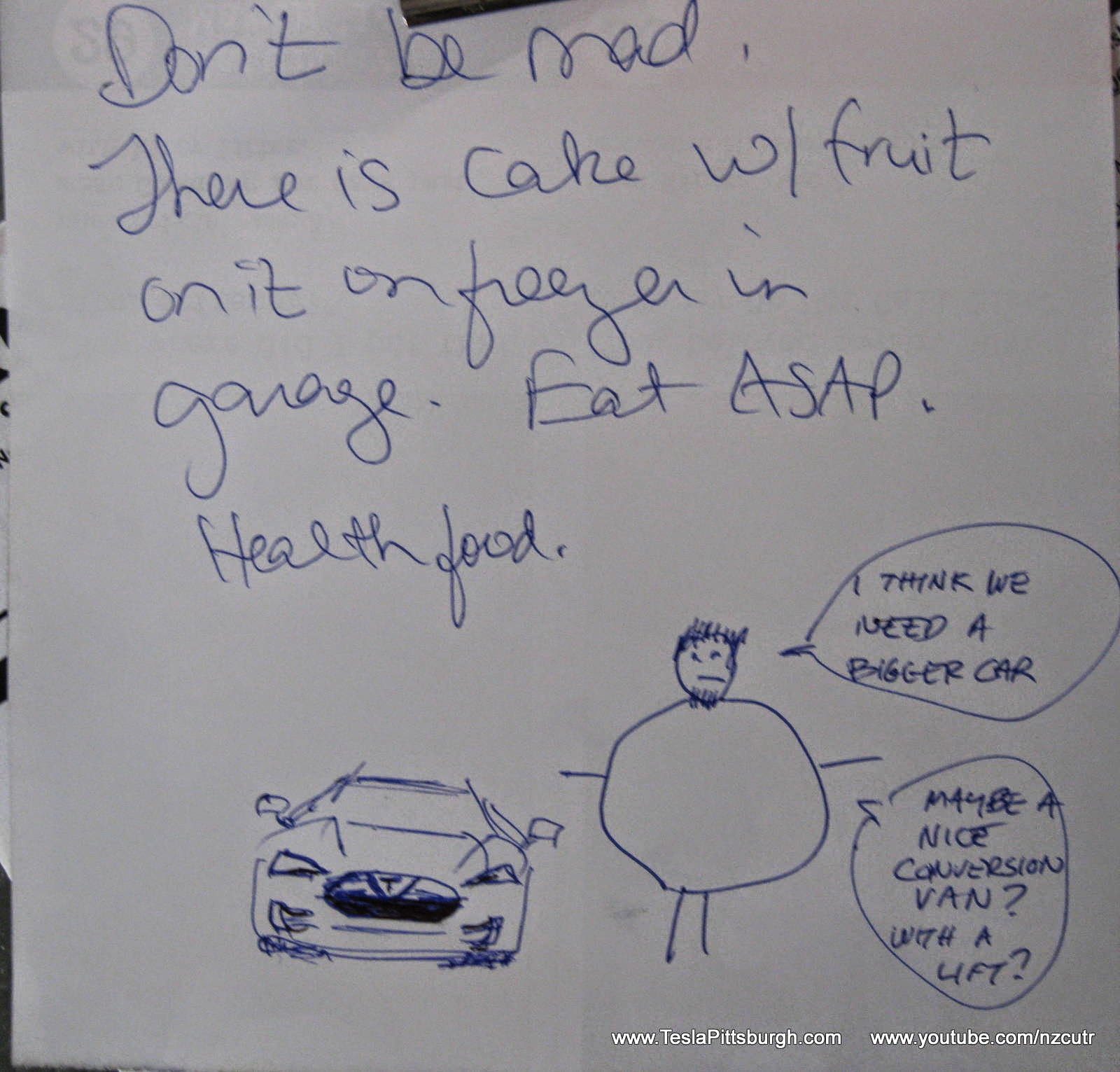 The next week was full of stolen "well, what do you think NOW?" type conversations around the house.  We'd bump into each other, raise eyebrows, smile, shrug, and just generally tiptoe around the topic as our self-imposed deadline appeared.  "Tesla talk" showed up in other conversations and in notes we left for each other-- like the one above.  In this one, Alice was trying to convince me to eat cake despite my insistence that I wanted to up my fitness as the weather improved.   I daresay for a first attempt, my sketch of a Model S front end from memory was pretty good.   <back pat, back pat>

It was also widely reported (and confirmed the Tesla team at the event) that a Summer shutdown was planned for the Fremont factory.  Tesla would be moving the original production line and combining it with a new production line, changing some processes, and preparing to build the Model X along with the Model S in ever increasing numbers.  From the sounds of it, the assembly line they'd worked so hard to get the bugs out of would be completely uprooted.  Call me superstitious, but I think getting a car off a "perfected" assembly line is preferable to getting one off a newly created one.

At the end of the week... the time had come to decide.    Neither of us had the discomfort we'd felt 6 months prior.  We weren't "unsettled" by the thought of buying this car, now-- and before it wasn't about the car anyway, it was about the timing of it.  Sure this was still a big step but we both felt a peace with it and the timing-- especially after Jake's license plate frame CURSE all Winter long-- seemed to be much better.   The reviews from owners of the cars' Winter weather performance had been good.  The continuation of the rebate was good.  The separation from a potential Model X purchase would be good too.  We were voting with our hard earned and saved dollars and jumping on a pretty new bandwagon-- we're not typically "early adopters"-- but this time, it all seemed good.