FINALLY.   It had been just over 8 years since we'd last brought a new car home-- and that one was used and 2 years old at the time!  We'd delayed gratification for a long time and put up with a lot of repairs and hassles and now... NOW we were making a big plunge into a relatively unknown part of the automotive experience.

Like many things with Tesla, buying the car is not your usual experience.  This one was quite strange-- especially for used car shoppers like us!
First of all, there are no dealerships.  You know that already of course, but I wanted to remind you.  Here in Pittsburgh we don't even have a gallery or store to go to.   We'd already made peace with that from our first cancelled order in October though.  We knew the drill.  We knew how it would go...   at least, we knew how it would go right up until the moment you click the "confirm" button and turn your deposit into a billable order.

Unlike October, there would be no hesitation this time.  We put in the specs and as Alice was preparing to go to work, we confirmed the order.  She made ME click it.  Ahhh..... but Tesla pulled a fast one!   After clicking "confirm" there's ANOTHER click to be done.  Call it the "confirmation of the confirmation".   I made HER click that one!  Now we were both on the hook for this future machine. 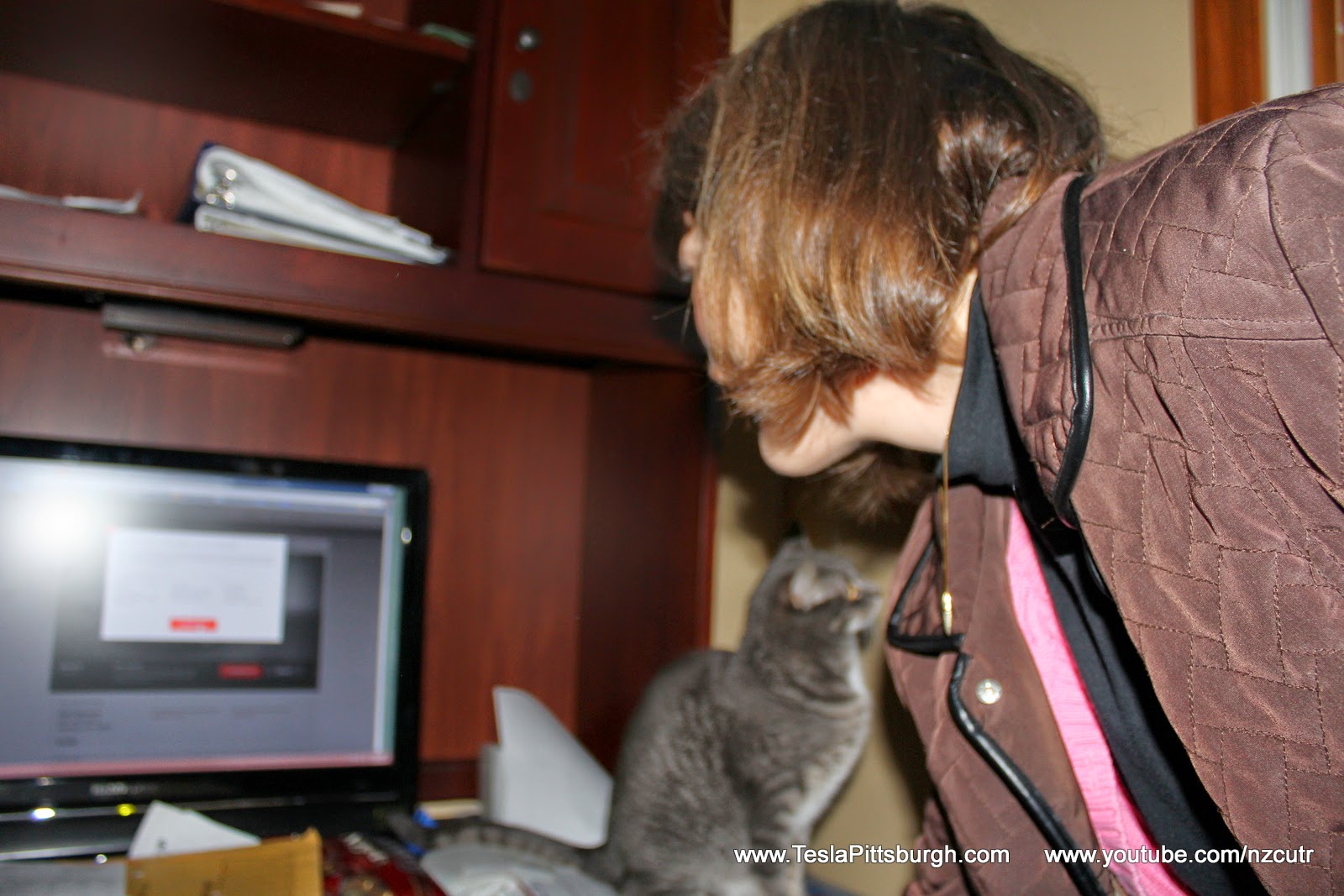 If you look closely in this picture you can see both red "confirm" buttons, the white window over the black one.   Two clicks and you've ordered a Tesla.   From your home.  On the internet.  No big dealership =  no big deal.

All the Tesla Kool-Aid drinkers want to know about configs.  They talk about them constantly.  "What's your config, dude?"  Now I'm one of them.  I'll go into the why of our configuration some time later.  Maybe our decision making process will be of use/interest to someone else (I know I read LOTS of opinions too).
For now, I'll just toss this here: 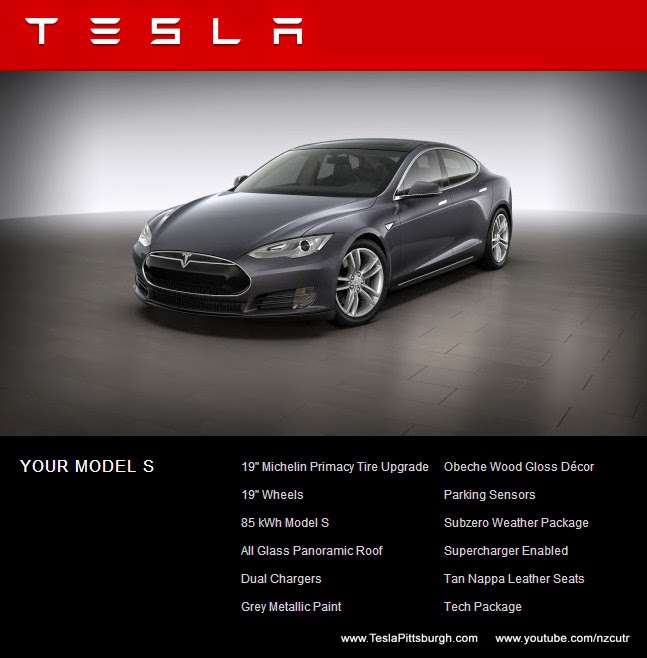 An interesting factoid/side note.  The "Tech Package" is one of the hallmark options on a Model S.  It includes all sorts of whizbang computing power that your average Audi can only dream about-- but it also includes mundane stuff like memory seats and the automatic door handles.  It's also the most expensive option other than the size of the battery pack.  As such, you really want to make sure you get it-- but also that it is confirmed.

Visually there are only TWO distinguishing ways to tell if a Tesla has this important option-- and neither are inside the car (even though most of the package's features are).  Weirdly they also seem to have eluded most of the Tesla staff I talked to-- they never noticed, I guess.  The visual cues are a chromed diffuser on the lower rear bumper and chromed grill inserts on the lower front bumper.    See that picture up there?  Notice anything missing?!   I did.  It disturbed me so I contacted Tesla and when they got back to me they confirmed my suspicions.  It was just a website glitch.   Whew!  The car looks a lot more finished with the chrome too, but mainly you want the package for its functionality.  Also, if you ever have reason to sell the car I think you'll find selling one without this option to be financially significant to say the least.

The only other difference between the car we ordered in October and this one is the orientation of the wood on the dash.  Earlier production runs had the grain running vertically.  It was kind of a distinctive touch-- I don't think any other car company has ever done that before-- but Alice and I both preferred our wood running side to side and were glad to have it "pointed the right way."  The obeche gloss also ties the tan and grey together nicely as it features both colors within its grain.

For those of you with OCD, you'll also note in this view that the main touchscreen is canted towards the driver.  With the vertical wood, the edge of the touchscreen would not align with the grain of the wood-- it was all angled a little crooked looking.  Hopefully Jake will forgive me for pointing that out.  Again.  heh heh

So there it is, grey and tan together.   I think they look happy enough.  It isn't like I've been a slave to fashion all these years if they don't.   No big reputation on the line.  Also I have to say, the Tesla images here (from their website) do a real disservice to the grey color.

It looks like cheap modeling clay in these animated pictures... Maybe when the car is dirty it looks this dull, but I've seen this color when it's clean and it has blues and greens in it, and morphs around like a chameleon.

So now the car was ordered.  The Tesla website dynamically updates you to the production status of your car while you wait.  For us the wait will end up being about 8 weeks.  The longest portion of this wait is spent-- according to the Tesla website-- "sourcing parts" for our Model S.   In truth it's more about scheduling production batches depending on what country the car is going to, the color, the battery size, and lots of factors we are not aware of.

Reading the "sourcing parts" for so many weeks really got my wheels turning though.   If Tesla had so many parts to source, maybe I could find some parts to source on my own....