In October, Tesla conveniently scheduled a Test Drive Event in the Pittsburgh area.  In fact, they scheduled one exit down the highway from us.  Right when we were getting comfortable with the idea of buying a Tesla.  On a weekend we didn't have other plans for. 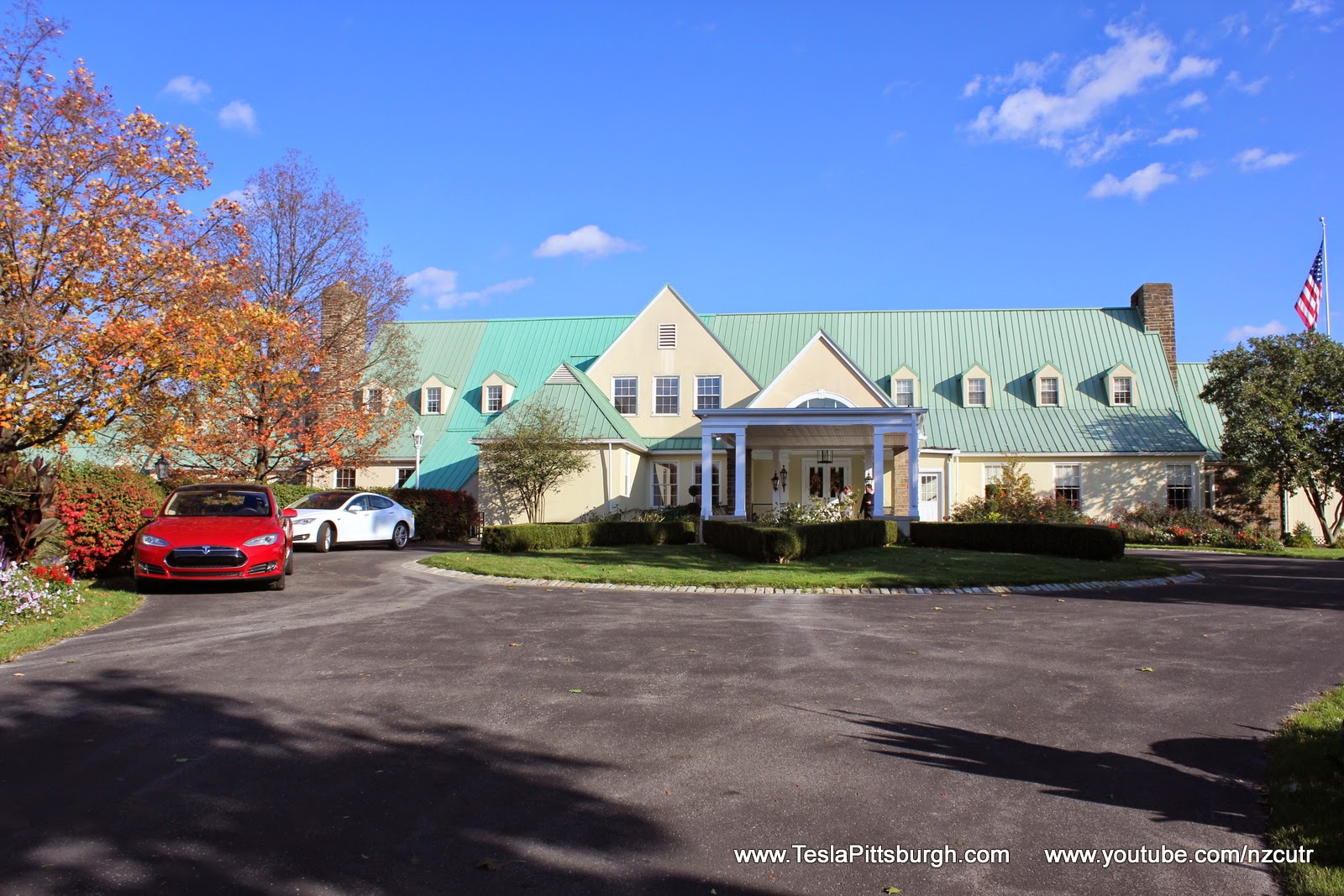 It's almost like they KNEW we were close...   but closing the deal?  That was still pretty much up in the air.  After all, I still a number of concerns, remember?


The first person we met when we walked in to the event was Chris Vance from the Philadelphia Tesla Store.   Tesla can be proud that he was the first company employee we ever met-- he represents the personable service that they strive for.  Chris was charming and knew a lot about Pennsylvania's future with Tesla.   I hit him with questions about Superchargers on our expected roadtrip routes, when would Pittsburgh get a service center, what was the status of the state tax rebates, etc.   Chris absorbed each question with genuine information (from a car salesman??) including "I don't know for sure" when it was appropriate.   Wow.  So this whole new-way-of-selling-cars thing was real!  Interesting.

We also met Will Nicholas (Northeast Senior Regional Manager) and he helped answer some of the timing questions.  The expectation then was that Superchargers between Pittsburgh and Philadelphia would be coming online in the next few months.  Pittsburgh was also expected to get a "Service Plus" Center (store + service center in a shared facility) sometime in the 2nd quarter of 2014.   Well... that answered a number of our concerns in the first 5 minutes or so we were there!  Now it was time for a drive.

While Jake had already generously let me load up some miles on his car, Alice had always refused to drive his car.  Fortunately, Tesla had brought quite an assortment!  Since Jake's car had the air suspension we opted to test drive a car with the standard coil suspension.  Not only were the coils several thousand dollars cheaper, they are much less costly to service long term and ostensibly provide more precise handling (so say the race car drivers who own Model S already).

This would be Alice's FIRST time driving a Model S.

As you can see... the Model S made the usual impression, GRIN!   If you haven't driven one, you really must... to understand the THRUST.   Now we were both sold on the car.

The Model S had already had numerous enhancements rolled out since production started.  Tesla doesn't "do" model years, instead improvements are offered as soon as they become available and sometimes-- because of the waiting time from date of order to date of production-- people even get MORE features on their cars then they expected!  The delay at this time was close to 3 months, so we thought, and that would put us well after the end of the year and well past the deadline for the state tax rebate (which was expiring). We'd gone down to test drive the car but fully intended to wait until March or so to place an order and maybe Tesla would roll out some new options while we waited.

Then Chris said something like "...oh, I think if you order now you can easily get the car before year's end."

Alice and I quickly ducked to the side and did some quick calculations.  The state rebate was basically a "coupon" and we are definitely in favor of buying things on sale whenever possible.  The Model S was in such high demand that used ones were selling for more than new builds and maximizing the tax rebates only helped the long term cost calculations.  Besides, the deposit is fully refundable for the first 2 weeks (or when you confirm-- which ever happens first) so we could still think about it more later.  Alright.  Alright!

Let's order a Tesla!  I happily handed over a card to Chris for the deposit and we plugged in our preferred configuration. 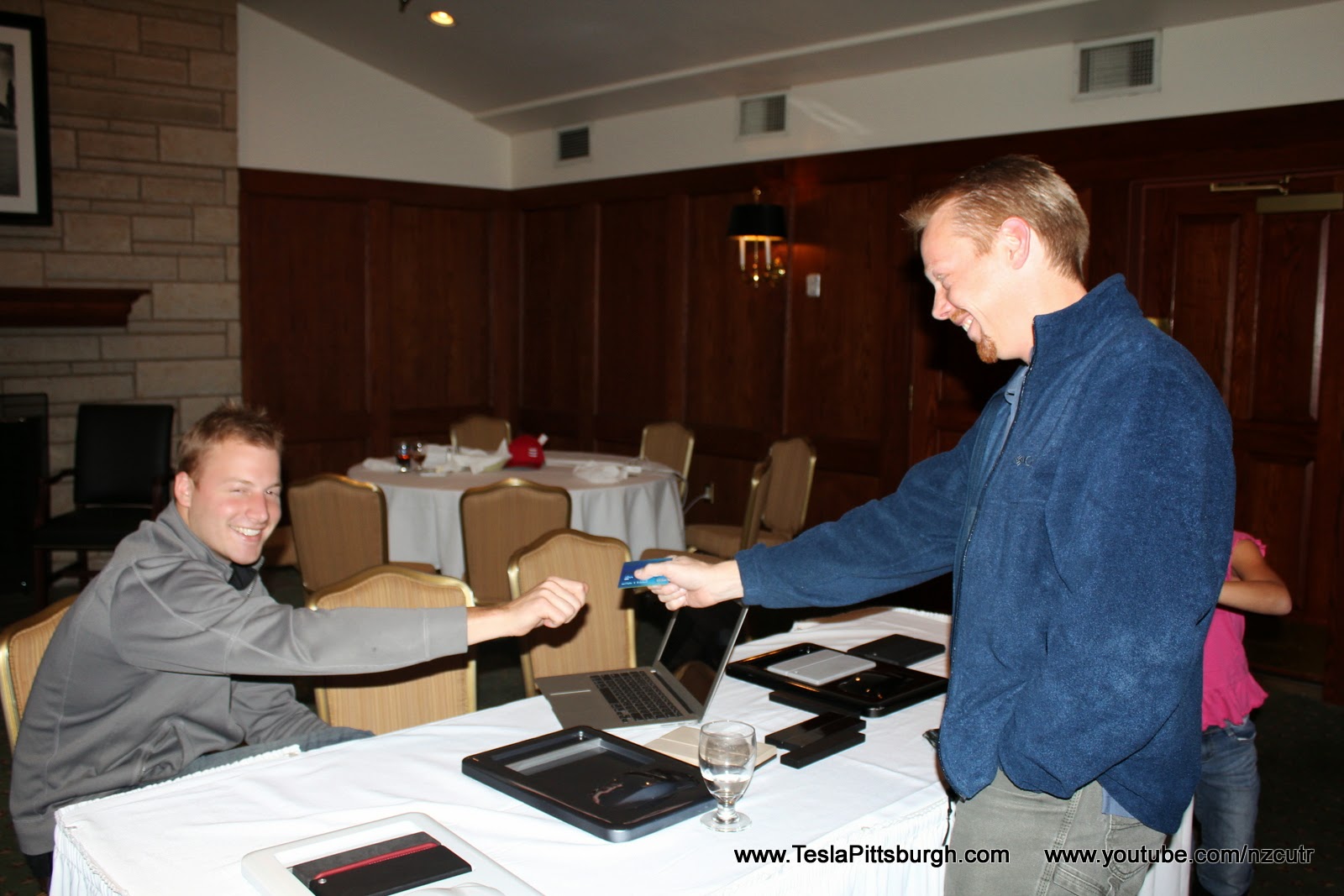 We spent the next week pondering our configuration.  Normally we'd default to whatever color blue was available and a tan interior-- not unlike our Chrysler.  Unfortunately the Tesla blue is a VERY dark shade-- much darker than our 300-- and in most light it really registers as black.   Yikes.  A black car is a part-time job in and of itself.  No thanks!   Our Subaru is silver and pretty much always looks clean because of it.  I think I've maybe washed it seven times in the 10 years we've owned it. Unfortunately, again, on the Tesla the silver looks too close to the chrome strip under the doors (in the black rocker panels) and effect is that the doors aren't properly fit.  It also looks pretty bland... the Model S has a lot more sensuous curves than the Subaru with its cladded sides.  We considered red but... c'mon... Red on a car than can sprint faster than a Porsche is just asking for trouble.

That left grey.  All assurances from the forums and those who'd seen it were that the Tesla grey has a lot of blue and green/aqua tones in it, that it can be a chameleon of sorts but tended blue with most of the dirt hiding capabilities of the silver without using the reflective qualities that properly highlight the car's shape.  Thinking of the snazzy grey Aston Martin's I'd seen definitely helped-- so grey it would be!

Tan interior was out, replaced with grey leather and the grey toned lacewood.  I really liked the IDEA of the lacewood, but Tesla chose a weird grey/pickle type stain, not the warm iridescent reddish/brown color typically used on lacewood.  The grey leather also was very light, like it was a little ashamed of being "too grey" and erred on newsprint smudged whitish.  After the first week, I couldn't take it anymore.  We couldn't confirm the order and I couldn't find peace with the interior color.  I didn't want grey leather.  I didn't.  Once again, with many assurances from those who owned grey cars with tan leather on the internet forums, I won Alice back over to a tan interior on the merits of the grey paint's bluish hue.

Now we were ready to confirm!   But we couldn't.

Neither of us could settle on the confirm button.  It stared us in the face for most of the second week.  We knew time was running out and the car would "auto confirm" soon but we could not come to grips with the significance of the expense, the timing of it (on the edge of Winter), and the "what will people think" aspect.  This is a polarizing car  for a number of people... and despite our reasoned approach to getting it, many of those folks will be judgmental or jealous, assuming the worst of us.   Were we ready for all of that?   No.  We couldn't do it.  Not yet.   It was really upsetting but the right thing to do was to defer this machine of the future.

I called to cancel the order with one day left before it auto confirmed.  The nice woman from Tesla was very understanding and warned me that because of the late cancellation I might still get notifications to the contrary.  Sure enough, the next day I received confirmation from Tesla than a VIN number had been assigned to our car.  I don't know who ended up with the number if the car was built anything close to what we had specified, but VIN 27050, wherever you are, I hope your owners appreciate you!

Even more disappointing, the car would have been delivered in the days before Christmas.  Not only was this well before the tax rebate deadline, but I was already set and making plans to stash the car at Jake's house and then retrieve it on my way home from work Christmas Eve.   Christmas morning it would be snuggled into the garage with a big red bow and wide-eyed kids to greet it.  Alas, it was not meant to be-- but here's a GREAT Tesla Christmas story that did happen:  http://www.teslamotors.com/customers/story-rocky-angelucci 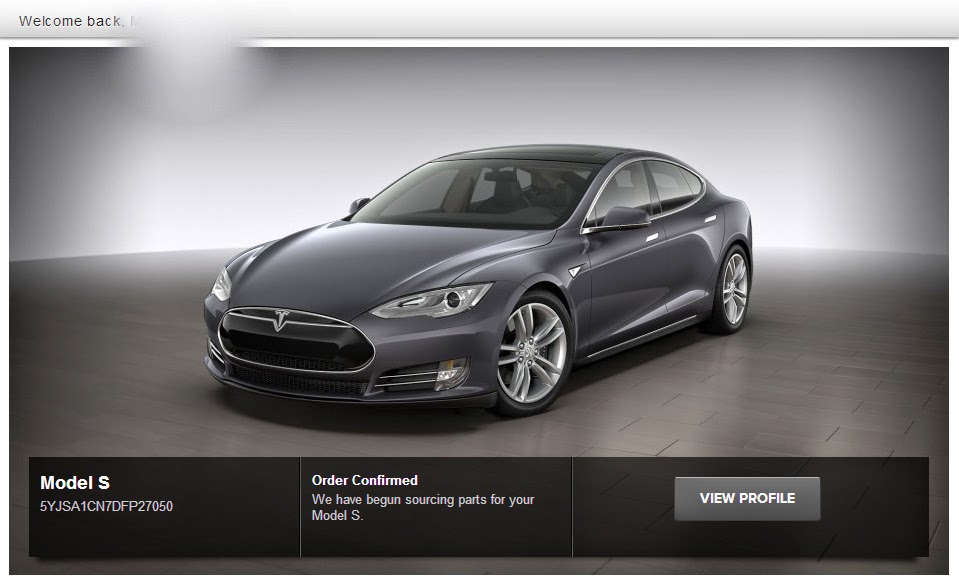 We'd dropped out of the bleeding edge.  We still had two perfectly good functioning cars though, so there was no need to wallow in it.  There was no further discussion of "what" our next car would be, just when.  Whether is was Model S or Model X... a Tesla would be coming.