Ever wanted to cast a spell on someone?  A curse even?   Do the ends sometimes justify the means?  I'm pretty sure that Jake, in his efforts to expand Tesla ownership in Pittsburgh, put a curse on me.   Oh-- he dressed it up to be sure... but a curse is still a curse! 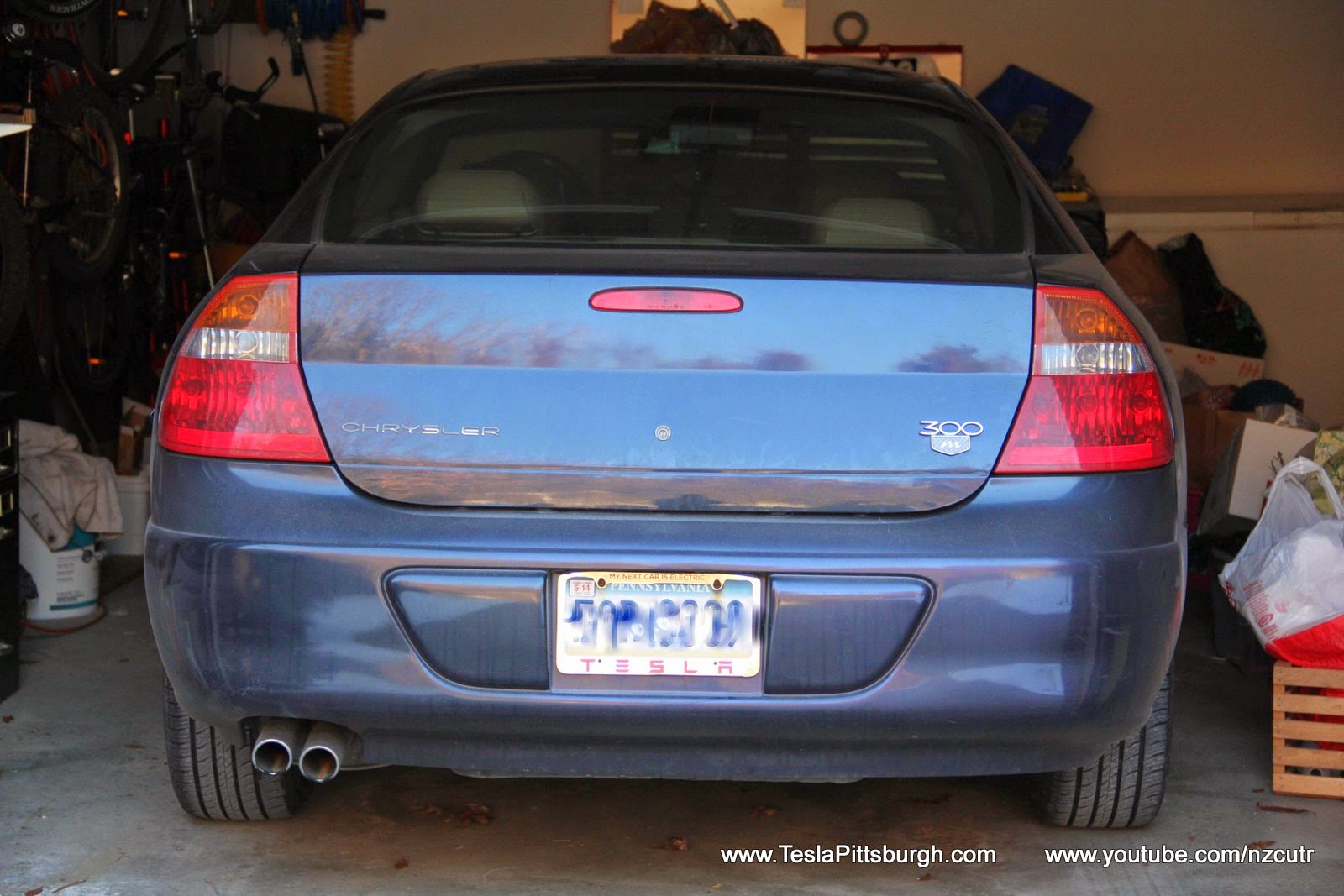 And the curse is STILL working even though our delivery is getting close!
SURELY, you're saying to yourselves, I'm overreacting.  Well, I think the evidence speaks for itself.  See that picture above?  Look closely.   You'll note the that 300 is sporting a shiny chrome Tesla license plate frame.  It's hard to see, but along the top it says "My Next Car is Electric".

One morning Jake appears for one of our usual coffee runs and he presents me with that license plate frame.  He says it got him through a long waiting period for his car and he was "passing the torch" to me, to help me find patience while waiting for the right time to reorder a Tesla.  I remember thinking how kind it was of him to think of us and accepted his gesture gratefully and mounted it up on the 300 immediately.

Remember how I said at the end of the last post that with Winter setting in things "began to heat up"?   Well, that "thing" was the 300.  It promptly blew a radiator and stranded Alice at a shopping plaza at 0-dark thirty.  I get a phone call WELL in advance of my usual wake up time (remember, I work the late shift) and it's the words every DIY husband wants to hear "the car is broken".   Groggily I hope for a minor mechanical misunderstanding.  After all, less than a year prior we'd paid more than most 3rd world nation's GDP to get the head gasket replaced after the engine melted down.  On a Chrysler 300M that requires a complete disassembly of the entire front end of the car and it took about a week to get things sorted again.

Driving down the highway, she says, the car bongs a warning and she looks down to see the temperature gauge pegged.  With no where safe to stop in rush hour traffic, she proceeds to the next exit and stops in a grocery store parking lot.  The car is HOT.   OH. NO.  OH.  NO.   Not good.

I assemble a quick assortment of tools/fluids, instruct the kids to get themselves on the bus/make lunches together, and rush down the highway.  In my head I'm like a AAA white knight in shining armor but in reality I'm disheveled, groggy and look like the homeless guy that carjacked the rightful owner of my "rescue vehicle".   Indeed, the 300 is crazy hot when I open the hood-- a good 30 minutes after she parked it.  I can see there is zero coolant.  Not a drop.  I check the oil.. that also is dry.   It's unclear how widespread the damage is but she assures me the car was running when she parked it.

I start a couple IVs from and run a Chem7/CBC and all the other stuff I've seen EMTs do on televisi--  I'm not a car mechanic, you see, I don't even play one on TV.  The car is still super hot so I start with the oil, fill 'er up.   After buying a socket extension I forgot to bring (luckily there's a hardware store right across the parking lot), I behind replacing the coolant.  It won't take much because I don't have the right tool to really add it from empty, but I eventually get enough in that I'm ready to start up the car and see what happens.  My fear is that the brand new head gasket has been destroyed.

After a minute or two the car appears to run normally.  Sounds good, smells good, exhaust is invisible, no signs of leaks...  Let's make a run for home!  We zip back up the highway to the house with me driving the stricken car and a wary eye on the temperature gauge.  Pulling in to the garage nothing appears to be amiss-- amazingly-- so I send Alice off to work and I spend some more quality time checking the fluid levels and checking for error codes.  I think it's actually okay.   I pack up more fluids and tools and take it to work and back home and all seems well! 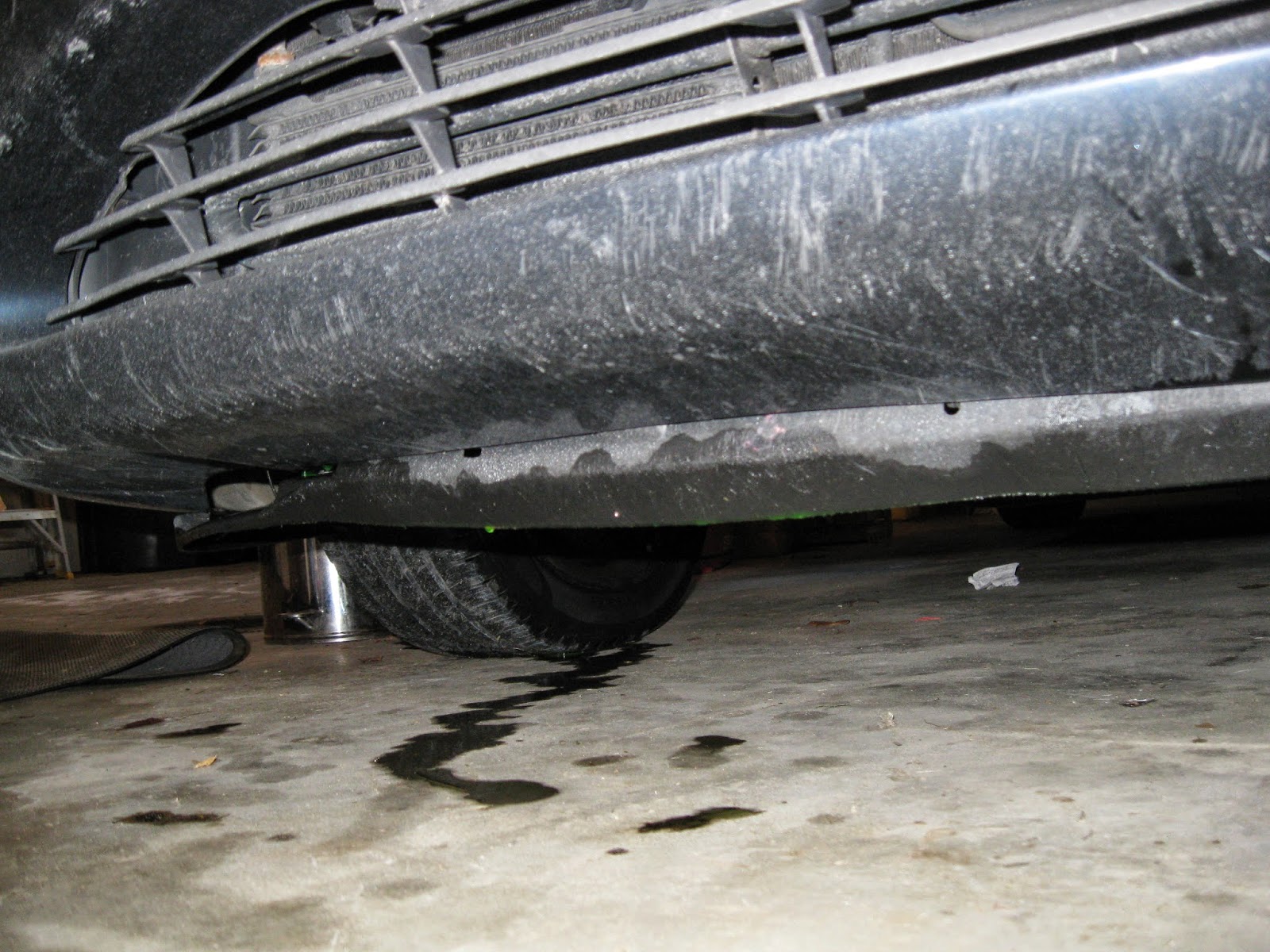 Until the next morning.   Uh oh.  After sitting in the garage overnight the 300 has bled out.  The patient is in critical condition once again and our garage floor is coated in the sticky slick sweetness of coolant.  The radiator is clearly the source but it remains to be seen if the car is in need of  head gasket too-- the jury will be out for at least another day.  We will not be paying for such a repair a second time.  This could be the end of the line.

After a transfusion, we drop the 300 off to be assessed and in the meantime I reach out to Chris Vance from Tesla Philadelphia and ask him to begin checking inventory cars (there are precious few) for anything remotely close to our preferred configuration.  The odds are ridiculously long that he'll find anything-- let alone anything we'd want-- but we can't wait 2 months for a new build without having a working car in the meantime.

Amazingly, UNBELIEVABLY, there is ONE Tesla in the entire country that is available and a near-perfect match for our specs... and it's in the nearest Service Center too, Columbus, OH.  His email comes on 12/21/13...   and we could actually get the car AND still get the tax rebate.  In fact, we'd have it in our hands on the SAME DAY our cancelled car would have been delivered.  The car is even BRAND NEW, never was put into service-- an "orphan" car someone backed out of at the last minute.  The VIN is even eerily close to our stillborn 27050-- this car is 26763-- and the only difference is it has textile seats and a piano black dash.   Wow.   Are we actually being given a SECOND chance to buy, essentially, the same car??

Then the verdict comes in.  300 needs a new radiator... and that's it.   Repair cost is minimal, prognosis is good.

We continue to debate getting the Columbus car anyway-- controlling our destiny instead of waiting to be stranded again-- but in the end, we stick to the plan.   We will wait.  Now is still not the time.

Everything goes back to normal.  The year ends.  The rebate deadline passes.  Stretching a few more months seems like a piece of cake. 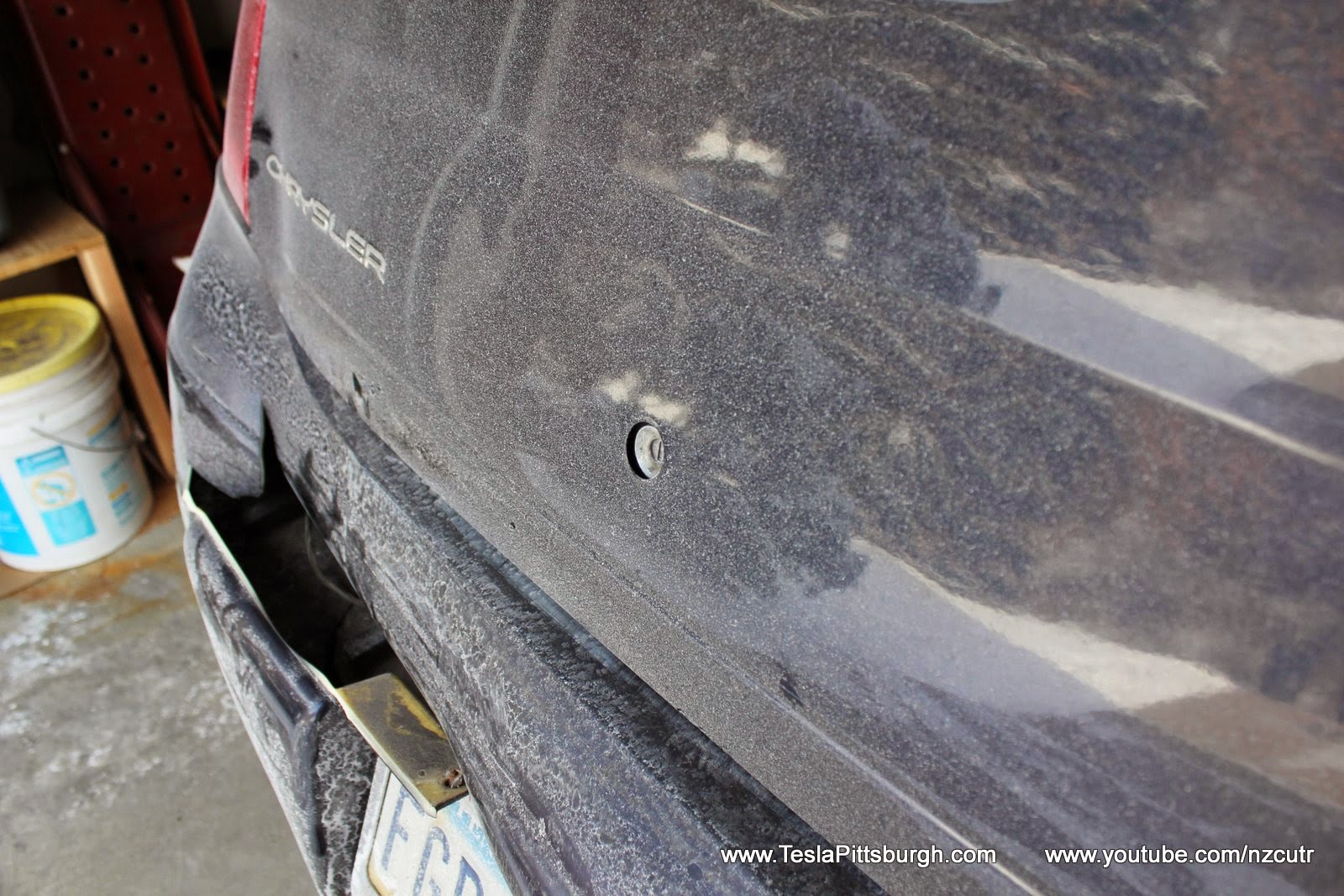 I'm sure she's a perfectly lovely young woman... but when she rammed MY perfectly lovely young woman from behind at a stop sign, I had visions of whiplash disability and lifelong pain with the kids forever relying on me to cook for them too.  Life was going to be awful for everyone!  Fortunately, Alice was physically fine, but my eye was definitely developing a twitch whenever the phone rang at unusual times of the day and hearing her say "About the car...."

It was a long work day for me, knowing that I had a damaged car to inspect when I got home.  At first it seemed to be a fairly minor repair... then I realized the trunk lid was bent and the support at the bottom for the latch was completely bowed inward.  We took the car in for an estimate and the preliminary numbers suggested that the car was right on the edge of being a total loss.  I was pondering buying it back as salvage and then selling it myself (I'd done this with our red Subaru years ago, bought back from the insurance company for $140 and sold it on eBay for $1400) when the insurance company said the body shop would have to dismantle it and hidden damage (if any) would determine our car's fate.  Just to be safe, I took off the cursed license plate frame lest it cast some spell on the assessor.

While we waited on the 300, we enjoyed a rental Dodge Journey (which drank gas like a frat boy at an open bar wedding reception) and debated the possibilities.  I was NOT going to contact anyone from Tesla until we knew for sure we were going that route-- we'd already backed out of TWO near purchases and there wouldn't be a third.  No, no.  The third time, whenever that happened, we would be going straight to order confirmation!  Another option was to buy a lightly used Subaru Outback HR6 that would eventually become a "college car" for one (or both!) of the kids.

For his part, Jake was commiserating on the apparent curse he'd placed on our family.  While assuring me that his ex-BMW had experienced no similar mechanical or accidental incidents, he offered to drive the frame to the nearest volcano and throw it in-- just to be safe!  Woefully, volcanoes are inadequately spread in our area.

As it turned out the 300 skated under the total loss amount by about $100.  The other driver accepted fault without delay or problem and life got back to normal...    at least until the front bearings failed.   And the air conditioning stopped working.  But I digress...

Car trouble wasn't the only development during the early Winter.  I also had an attack of pericarditis that landed me in the most expensive bed and breakfast around (the hospital).  It was EXTREMELY painful and quite frightening, having never experienced anything like that before.  Once I was on the mend, it was jokingly said I had a "broken heart" from the canceled Teslas.