I met my lovely wife as a freshman at Ithaca College.  We just celebrated 19 years of marriage (2 children, 4 addresses and 6 cars ago) and since her parents still live near Ithaca we've made the trek back up South Hill several times since graduation.  Our school song (LAME though it is-- aren't they all??) starts with "high above Cayuga's waters" and the view lives up to the lyrics. 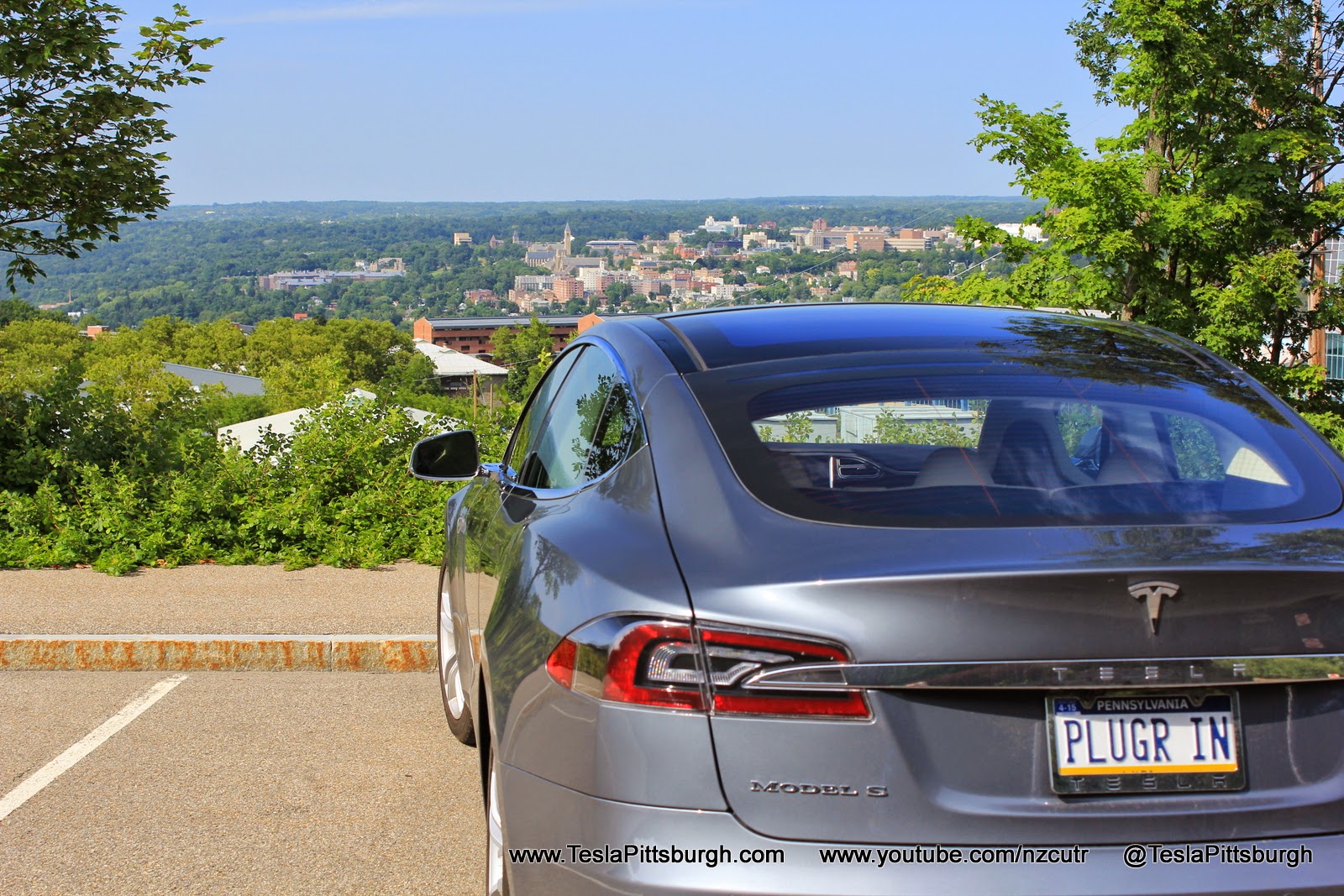 Plus, as every IC grad knows, it is WE who get to look down on Cornell University.  Literally.  (My wife is the "black sheep" in her family-- her siblings went to the cult across town.)

19 years after graduation, it was time for a victory lap.

We'd made arrangements to meet up with some friends from "the old days".  They're "solar pioneers" in the area and have some connections with the local utilities, so there would definitely be some "Tesla Time" built into the afternoon-- but our main motivation was a good lunch and some catching up.  Fortunately, we found both.

Winding through Ithaca to our meetup, we trundled along in traffic pointing out old haunts to each other and the kids (whose glazed eyes belied their true fascination with our early family history).  No time for complacency though.  Even with classes out of session (mostly) for the summer, the streets of this college town were still quite congested and hazardous for our juiced car, especially when the new cloaking system was engaged.  (Firmware version 7.0, neener neener neener)

We met up on the Ithaca Commons (a pedestrian only area that always reminded me of Germany) and did some strolling through the public works war-zone that used to be a gorgeous couple of treed blocks full of vibrant stores.  I think they're replacing a main sewer line or something... but it looks like Kabul.

Finally hunger overtook us and we made our way to the New Delhi Diamond, a buffet-style Indian restaurant.  Crap.  I should NOT be writing this before lunch time...  Anyway, the food was good and flavorful and our group (well into the double digits) cheerfully overwhelmed the seating area and ravaged the buffet.  It was delicious.

After lunch, we all decided to retreat up the hill to our alma mater, Ithaca College.  We were planning on going to the campus anyway and it didn't take much convincing that the routes immediately off-campus were more conducive for test rides than the crowded downtown area.
The plan was to pack the Tesla full of as many non-related people as I could, but somehow in the walk to the parking garage I found myself with only one rider.  Unsure where everyone else went (but convinced they'd already left), I treated my lone ranger to fast blast up to the campus where we rejoined the group.  A full car-tour was followed by 2 or 3 loops of the surrounding area with different combinations of people.

With everyone now "up to speed" (but well within posted legal limits, officer), we made our way to the campus bookstore for some alumni swag and souvenirs.  I'd long ago vowed that IC had gotten the last of my money-- I think that was prompted by an unjustified parking citation-- but the kids talked me into some trinkets and baubles.  We then parted ways with our friends and made a quick lap around the campus.

Most of the campus has undergone extensive changes since we were students here in the mid '90s.  We parked in the area between the student union and the communication school where the views were more familiar-- though the science building now has a name (we knew it only as "The New Science Building" or NSB).

At the time, this was the most modern area of the campus.  The angular structures of Phillips Hall pointed past the softer vaulted roof of the NSB to the contemporary looking Park Hall.  Other sides of the square were "graced" by the aging health center (where the diagnosis was always either pregnant or mono), the lower quad dorms (all still looking quite aged) and the contrarily cheap concrete of Williams Hall.  Williams Hall underwent renovation during the end of my stay here and now looks quite a bit less shabby with brick veneers all over it.

Somewhere deep in my photographic archives I have a picture of my (then brand new) green Plymouth Neon Sport parked in front of my school.  I spent many long hours in the Roy H. Park School of Communications, the best of which toiling with my friends Alan and Eric as we revived an old game show into what became "Fake Out"-- which AMAZINGLY is still on the air!  I believe it is setting new records for longevity in college television.  I'll have to find the old Neon picture and frame it up next to this new version (with wife, two kids and Tesla) in the garage someplace.  We've come pretty far since 1995!

The view was always one of the highlights of the campus.  IC enjoys a high perch above Cayuga Lake and the terrain is such that most of the city of Ithaca is invisible.  What results is the appearance that only trees and nature separate the campus from the cool waters below... unless, of course, you look to the east and see Cornell University crouched on the edges of its gorges.

In 1992, I arrived for orientation less than a month before classes started.  It was the first time I saw the campus, as I was in Germany for high school.  When room assignments were given I found myself in the West Tower in a crowded triple with two buffoons (dear Lord, I hope they've made something of themselves since... I don't even remember their names now).  The Towers were always a chore to live in between the arduous hiking required to get there and the near-constant false fire alarms.  My room on the 2nd floor  (ground level to the parking lot) meant I was spared the added indignity of using the elevators.

Well, they're still there.  And they still look like public housing projects. 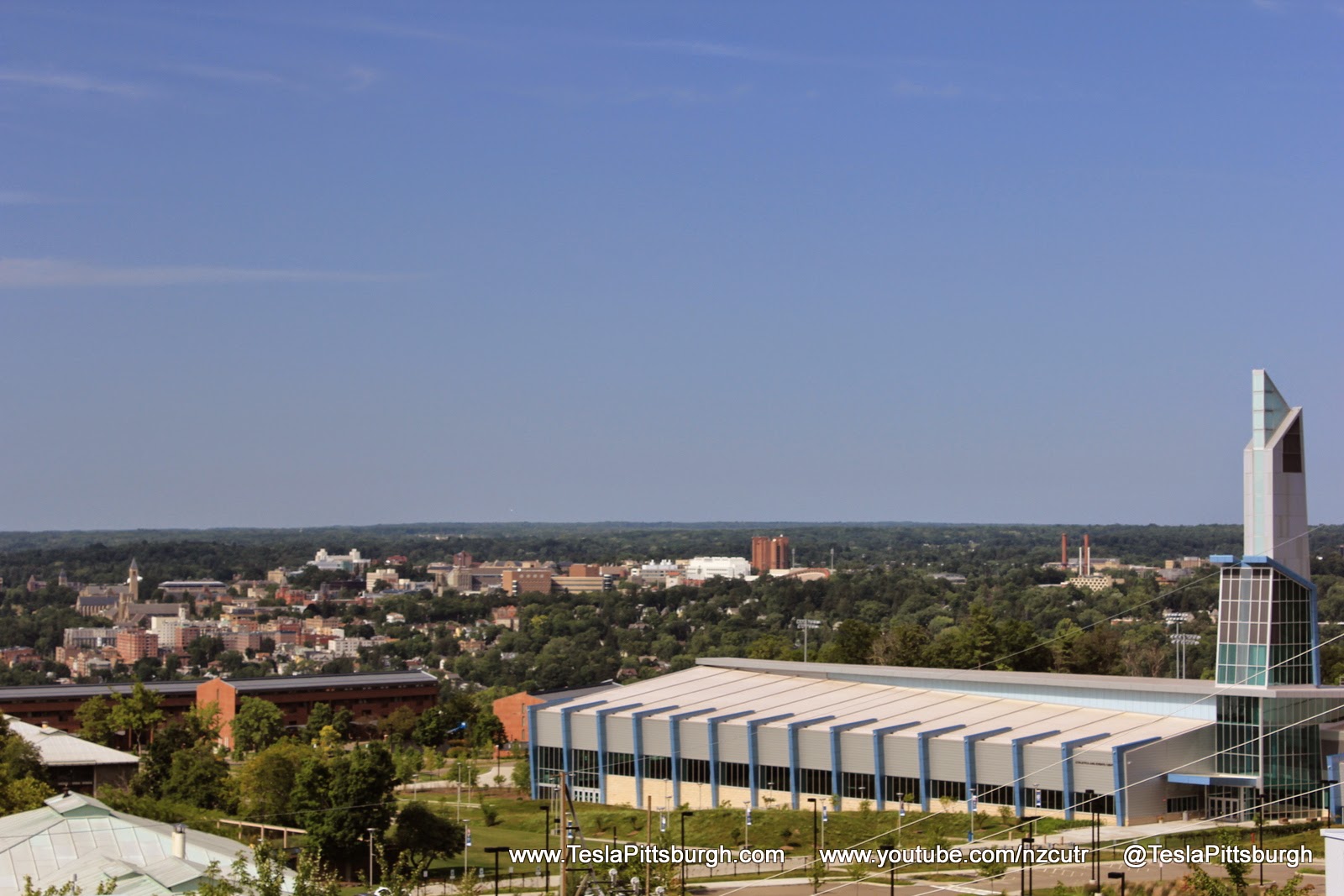 Off the side of the Towers parking lot there is an outcropping with a beautiful view of electrical transformers and other grotesque equipment.  But if you look PAST that mess, you are rewarded with a nice panorama of the new (to us) Athletics and Event Center.  Pretty sure the naming rights are available for any wealthy alumni, perhaps including the idiots I roomed with freshman year (who knows??)  It's been said the spire is a "middle finger" to Cornell which, if true, would perfectly match the sophistication of my old roommates.  The center dwarfs every other building on campus and assures me that other alumni are picking up our donation slack-- which is a huge relief as I would have thought the amazing amount of new construction in the last two decades would surely have bankrupted a lesser institution.

Content after our day driving around Ithaca and reliving old memories, we returned to the sleeping countryside of upstate New York.  As the moon rose over the cooling fields I again gingerly guided Serena back among the logging machinery and old tractors.

In the morning we'd be heading back to Pittsburgh.  The battery would need a completely full charge to get us started out on the right side of the range calculations I'd made.  I wanted to make sure that we allowed time for the pack to load balance after the charge but I didn't want to have it sitting fully charged unnecessarily, so I did some mental math and set Serena to charge at a specified time in the early morning hours.

That should do it.  Now I had to trust the car to wake up and charge.  Scheduled charges are still a big leap of technological faith-- but even more so for us, because the car was a chilly long walk from the house and we couldn't use the app to check in on her.  I didn't like the idea of a middle of the night stroll into the darkness (there are bears in the area too) but if the car didn't charge...  we wouldn't be leaving in the morning after all...

To be continued....  Click HERE for Part 5 - A Backward Glimpse, or click HERE for the beginning of this trip.