Dawn slowly clawed free from the darkness and glimmered in through the window of my wife's childhood room.  Coffee wafted under the closed door as we roused ourselves in the quiet solitude of a upstate New York.  On the edge of the field by the warehouse our grey Tesla merged with the mist. 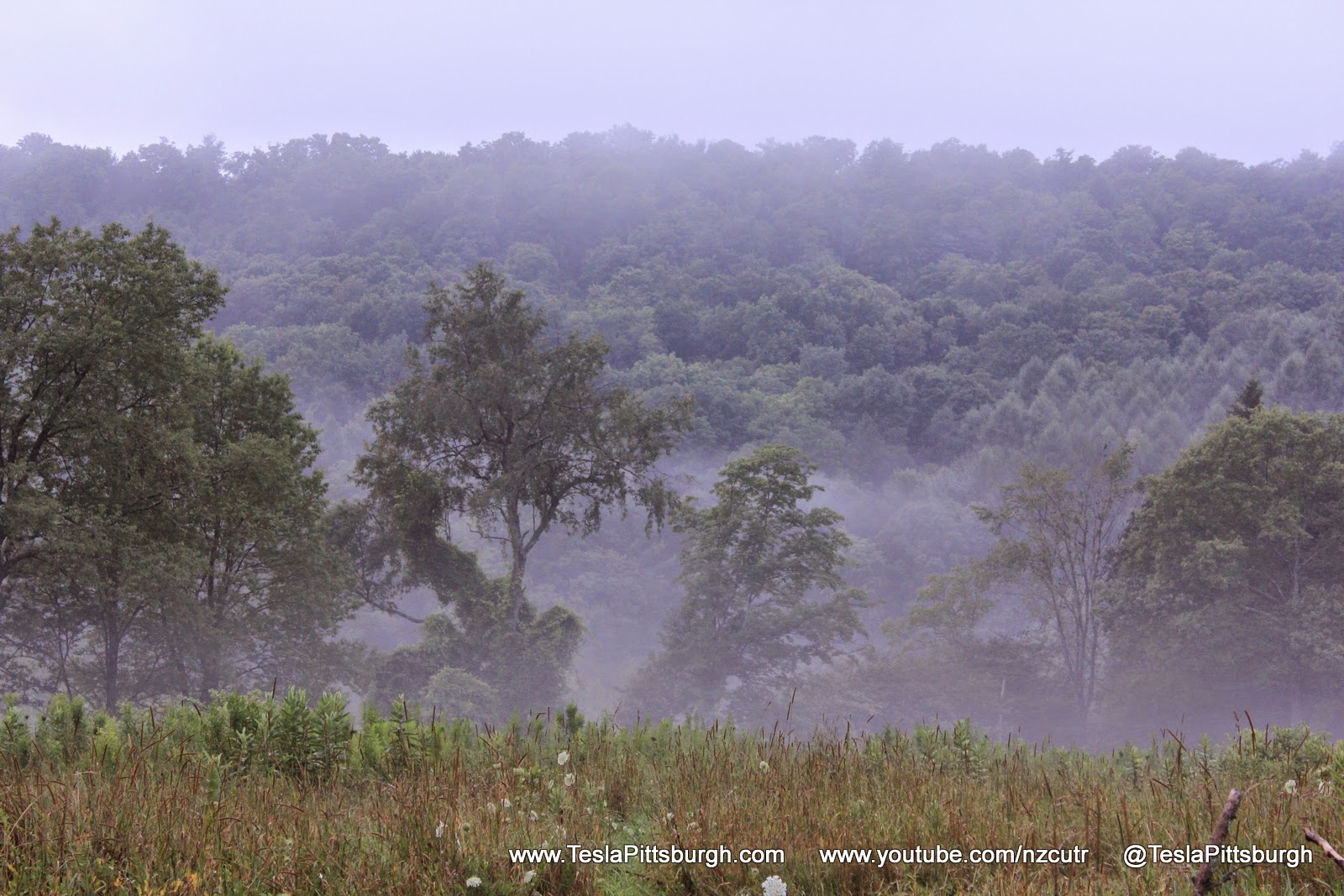 Pondering the days' activities over breakfast, I was eager to walk down to where Serena was hobbled to a plug and waiting.  She'd be ready for some fun and I was tickled with the possibilities of whooshing all that California horsepower through a sleepy farm community that had never seen an electric car that didn't fit under the Christmas tree and come with a remote.

It isn't about showing off, it's about showing the possibilities... and sometimes a glimpse is all it takes to put wondrous plans in motion.

Fresh produce has an allure that is nearly mythical in our house.  Picking your OWN fresh produce is turning the taste knob up to eleven.  With sunshine in the forecast and a nice breeze to complement the moderate temperatures, the family was ripe (ha, ha!) for berries right off God's organic display case.

There's a blueberry U-pick place not far from the familial home, so we would head out to pick as many as we could.  It would take 3 vehicles to get us all there and, of course, Serena was going to be one of them.  Crisp and clean country air flowed into the panoramic roof on the drive over.  Reaching the blueberry "patch" (which was acres big) we bumped up the uneven dirt driveway.  No regrets over the coil suspension, by the way-- you'd have to be doing some serious agricultural touring to need the "very high" setting on the air suspension. 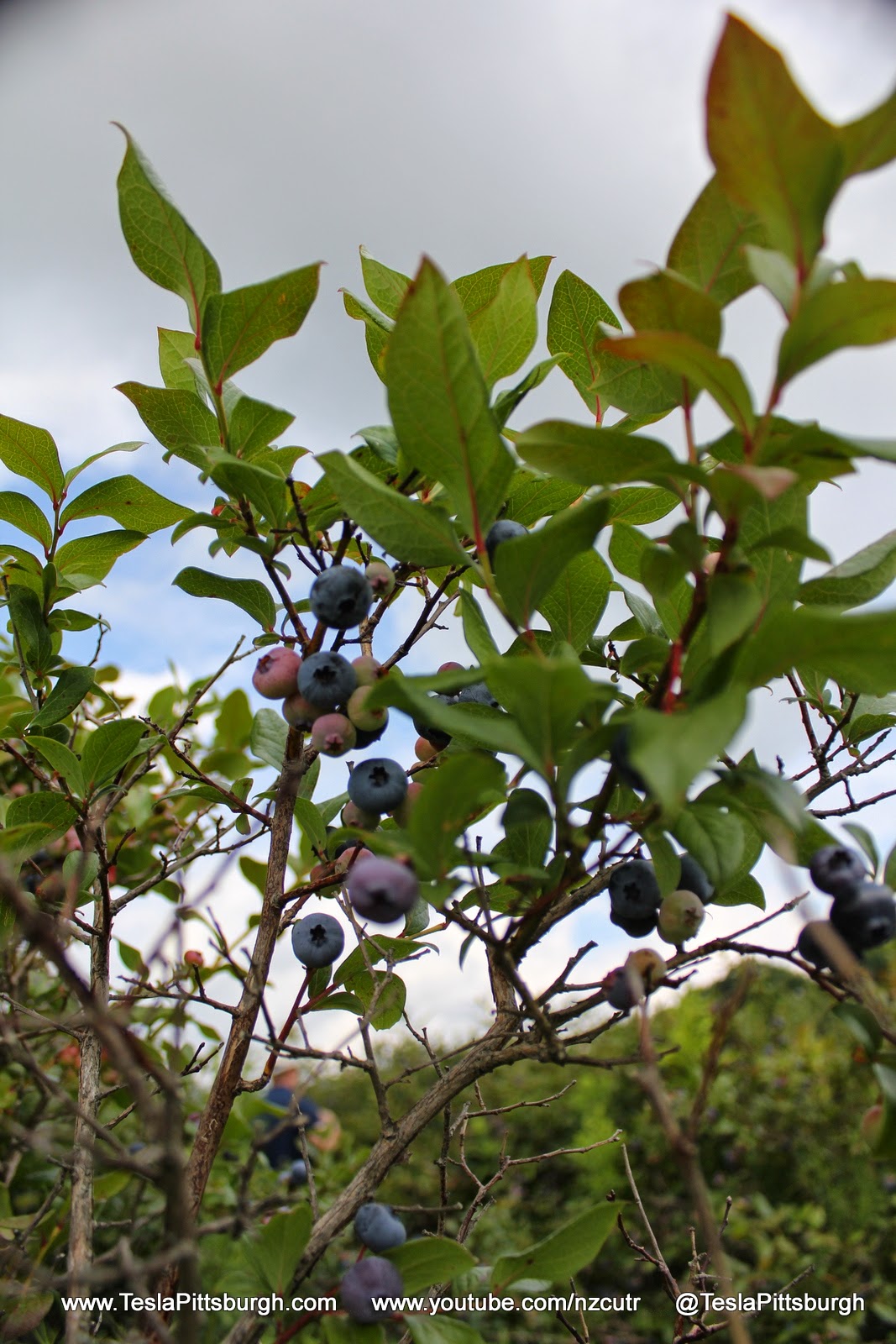 It was warm out-- not hot-- but definitely a warm day and Serena was going to be sitting in the sunshine.  I figured the blueberry-picking-crowd wasn't generally made up of thieves (and the car was empty anyway) so I left the panoramic roof open to keep the interior from getting hot.  Visions of birds with full bowels-- by the flock-- flashed through my mind but I talked myself out of irrational fears of fowl reasoning that mostly they do that when taking off... and we were well away from any trees.  It didn't matter.  It was still a mistake to leave the panoramic roof open.

We returned with buckets and buckets of blueberries after a gorgeous afternoon picking.  It was simply glorious weather with quiet conversation between us as we worked.  They let you eat while you pick (gleaning?) and my daughter's pick/eat ratio probably destroyed their profit margin.  Serena was free from bird droppings and didn't seem to have attracted any attention-- but she that had managed to trap many of the area's lazy bugs.  It seems that the intellectually challenged critters would wander into the open roof and get lost inside.  It would take several rounds of flicking over the next couple days to get all of the survivors knocked out opened windows.

Back at the house, I again picked my way through the soft ground and high grass behind the warehouses to Serena's plug away from plug.  Even straddling tractor tire ruts and heaved chunks of soil with enormous puddles seemed to be no problem for my coiled beauty.  Thankfully the ground right outside the warehouse doors was firmly packed and mowed (which is where I parked).  Otherwise I'd have been very concerned about coming back in the morning to find my car sunk deep into the earth!

I think the argument that air suspension is necessary for such "light-off-roading" is very overblown.  Maybe if there were deep snow on top of this uneven ground or if it were muddy in addition to being soft soil...  Realistically though, I wouldn't seriously consider driving my car over land much less "refined" than this.  It's a road car and easily able to go any place a normal road car would go... probably more so-- as there are no low hanging exhaust pipes/mufflers to ignite the dry grass or get caught on the lumpy ground, but if you're really trekking through rough country you're not going to take a Model S, regardless of your suspension choice.  There are other reasons people opt for the air over the coils, but this should not be one of them. 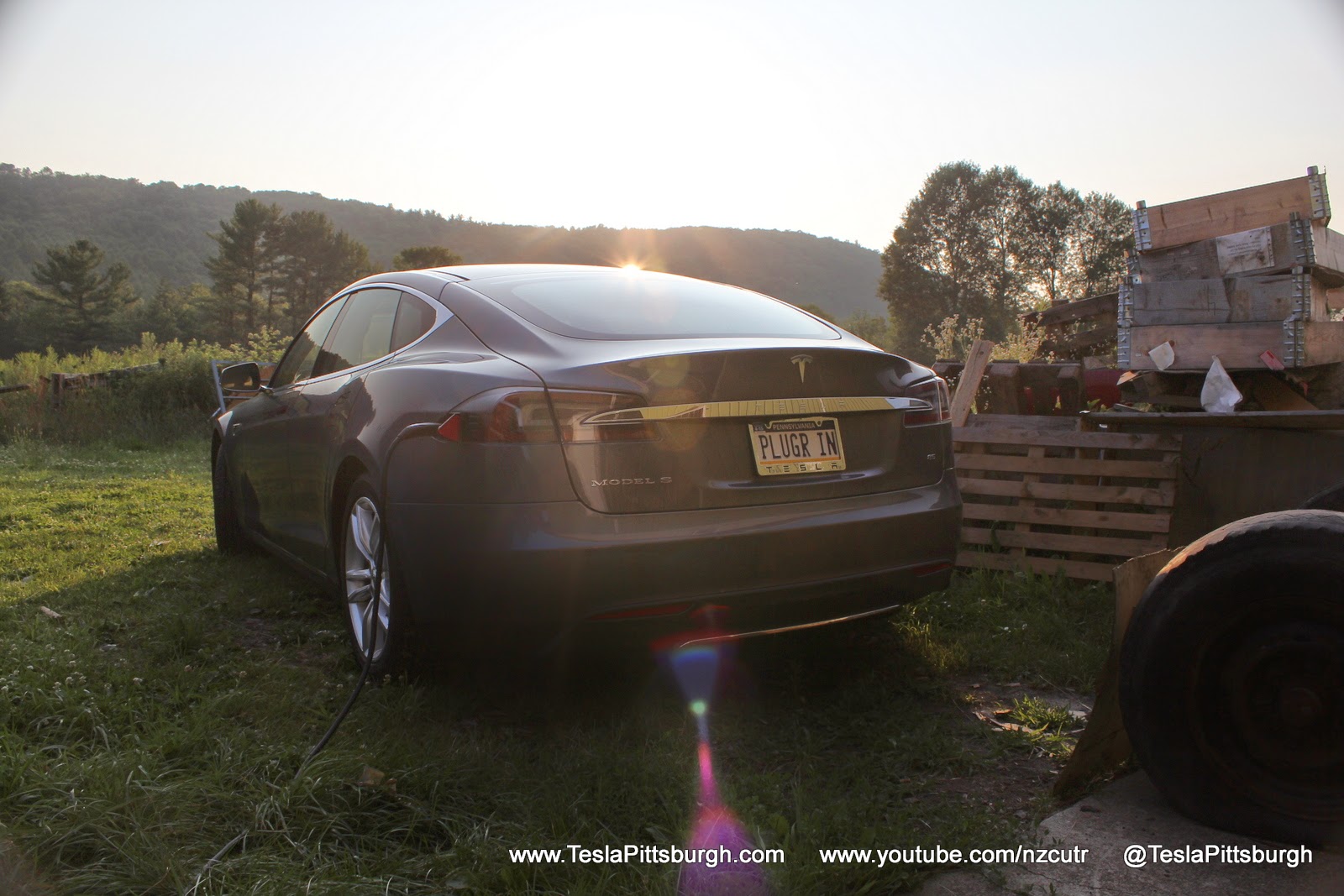 Tucked back in to charge for the night, hidden from the road behind the warehouse, I felt like I was hiding stolen goods.  Was I running moonshine?  A spy seeking discreet shelter in the countryside, safe from police?  A thief waiting for an enclosed truck to spirit away my prize?  Just one of those weird times when you know you aren't DOING anything wrong but it sure LOOKS like you're acting suspicious!  Once I had her plugged back in, I "snuck" back through the darkened warehouse to take a couple pictures as the sun set.

As far as I know we didn't change any minds or set any hearts a-flutter during our travels that day, but I still enjoyed it.  Every time I drive the Tesla I smile.  Every time.  There is just something magical about the way these cars move and respond...  So quick, it's almost like they are anticipating your inputs instead of reacting to them.  More akin to putting on and wearing an electric suit, whereas gas cars feel slow-witted and burdened.  Effortless power and silence-- there isn't anything else like it-- except maybe a horse.  I've read how cowboys will bond with their horses over the years to the point where commands are almost unnecessary.  Watching the sun go down over my ride resting on the edge of the field, I think of where this amazing vehicle has already taken me.  I feel more in tune with this car than I ever did with any of the others, even ones I've owned over a decade are still just reactionary machines.  They're just tools.  This is a magic carpet.

To be continued....  Click HERE for PART 3 - My Gorges Car (when it posts!), or click HERE for the beginning of this trip.