My dream as a teenager was to be an automotive engineer.  Specifically, I had a strong interest in the nuances of crash testing and materials (as they related to that balance between weight/safety and strength/energy absorption).  I made it most of the way through high school before I realized there was a fatal flaw in my plan:   I can't do math. 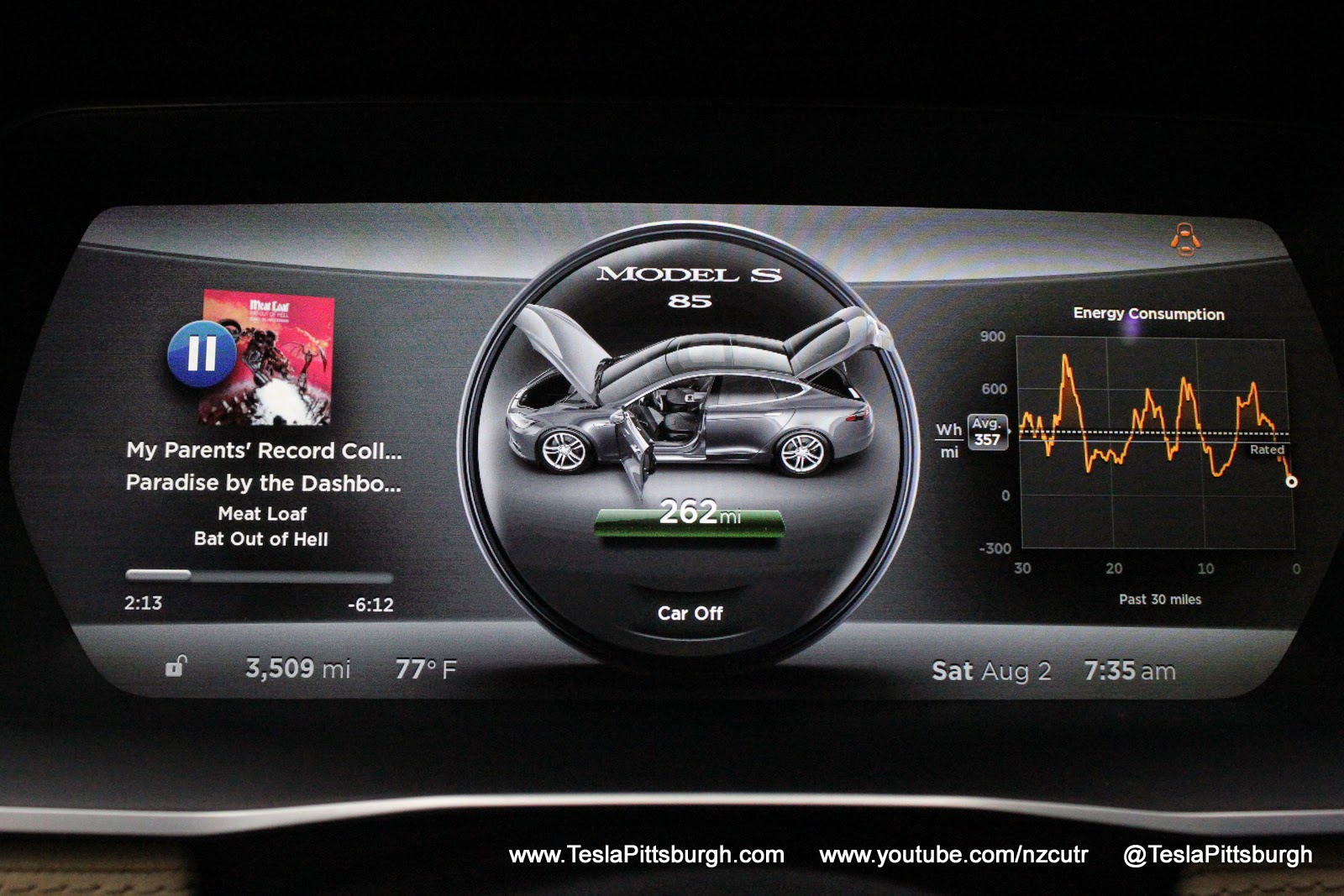 Fortunately I parlayed all those hours watching television into a career-- and now I rarely have to do math.  BULLET DODGED!  But then I bought a Tesla...  which is much smarter than me... and math becomes an integral part of trip planning.  Lots of it.  Lots of planning... and MATH.

Had I done it correctly or was another fatal flaw about to be revealed in my plans??

Alright, alright-- maybe I'm being too generous in my assessment of the math involved and too dismissive of how much of it the Tesla actually does for you.  Fact is that the car has copious displays of colorful graphics that tell the math-challenged how far they can drive.  These displays dynamically change to show how far you've deviated from your plan or how well you're adhering to it.  We'd charged up to 262 miles and had to drive 160.... arriving with 100 miles of range.  While the margin for getting there was broad (100 miles) the target miles left was quite narrow and precise... +/- 2 miles.  TWO MILES.  We set off.

Departing in the early morning hours helped us avoid traffic and frustration that could have affected our energy burn rate.  Mostly I was able to lock on the cruise control at whatever the signs said (+/-) and we just enjoyed our audio books.  Near Ligonier I noticed a massive hulking pickup truck closing on us like a deranged bull at speeds that were WELL in excess of prudence.  He roared past in a cloud of ignorance and small town redneck noise only to be stopped at the next light.  Unable to think on his feet he'd rocket ahead to be first in line at the next light too, cutting off other cars as he went-- but in the process of both launches his truck farted out a huge cloud of thick exhaust.  It was so thick I couldn't see through it-- but I was fast enough on the air recirculation button that we weren't gassed.  We think we were "coal rolled" but it could just be that such rudimentary intellects don't adequately maintain their diesel vehicles.  I resisted the urge to "demonstrate" the Tesla's ability to leave other vehicles in a cloud of dust because I had a plan... and I was not screwing it up or risking a confrontation with any country boys.
A leisurely and mostly traffic free morning had lulled us into the serenity of a quiet Tesla tour through central Pennsylvania.  Approaching our charging stop in Bellefonte I was pleased to see we were dead on target for our energy usage.  Smooth sailin-- AH!!  The navigation had just indicated our exit was upon us but there was some kind of police activity on the off ramp.  I couldn't see why the trooper was stopped so I slowed way down and gave the officer a wide berth.  Suddenly an exceedingly crappy Daewoo (I think) cut across the off ramp and headed back for the highway intersecting our path.  I stomped on the brake, horn and high beams all at once-- probably the hardest stop the Tesla has ever done-- and watched in disgust as the woman driving it still seemed only peripherally aware of her surroundings.  You'll have to trust me-- it was a lot closer call and more exciting than it appears on the wide-angle lens of the silent dashboard recording!  I hoped the police officer would take the opportunity to ticket her again but I guess his quota was already filled and it was almost lunch time.  I just couldn't believe that on a deserted highway on a bright sunny day we nearly lost our brand new Tesla to an idiot in a Daewoo... right in front of an ambivalent state trooper.

We stopped for a quick snack check at a gas station (I know, I know) and I pulled the dashcam video.  I needed my laptop to save the clip to and that was in the frunk.  Not wanting to completely unpack it, I just popped open the laptop in the frunk while the clip copied.  No questions.... but a LOT of stares as the ICE drivers filed through the store doors slack-jawed and staring at the junk in my frunk.

Weaving through the sleepy town of Bellefonte, we made our way to our charging hosts.  We snuggled Serena into their back garage and got the charging clock rolling right away.  They had a lot of fun stories to tell about their small town Tesla "CO2 FREE" and we traded some tales back and forth about the cars, the town and various travels.

Lunch!  Oh yes, lunch!  We were supposed to be availing ourselves of the charging time by eating, so we invited our charging hosts to direct us to a good local eatery (walking distance, of course) and invited them to join us.  Their recommendation?  The Gamble Mill.

A short walk later found us across the river and looking at a large brick building.  This mill was long ago converted to a restaurant but only recently added a microbrewery.  We had a lot of driving still ahead of us and the charging stop would not be long enough to sample any of the mill's brews, but it appeared to be doing a good business with music events and a sizable tavern area.

Not much of a crowd had shown up yet, early for lunch as we were, but the food was pretty good.  We all feasted on burgers and such as we admired the aged timber framing and tossed around more conversation.  Before we knew it the charge was nearly done and we made our way back to their place to liberate Serena.  We'd be seeing this family again on the return trip, obviously, so we made our quick goodbyes until the following weekend.

The numbers were all solid.  We had arrived at their garage with exactly the 100 miles of rated range that I had hoped for.  We charged up to a total of 202 (last minute bathroom stop for the kids took 2 miles to do) and headed out on the final 160 miles to our destination.  A cushy 40 mile buffer seemed like more than enough since we were, thus far, using our rated range on an exact 1:1 actual miles ratio.

Elevation.  Oh... elevation.  I had not taken into account how much the numbers would change when we turned farther north and instead of following the ridges we started to traverse them.  I relied on the cruise control to sort it all out and keep us on target, maximizing the regeneration on the downhills, but my eyes widened on every uphill.  We would fluctuate from a 40 mile buffer to 10 miles and then regain some of it back before the next hill.  It was hard not to ponder the ramifications if that buffer didn't prove to be enough...  so I slowed down a little, about 5 mph under the speed limit.  On the downhills I'd bump it back up but then slow in preparation for the steep inclines.  After a couple cycles of that I decided to trust the car more.  After all, we knew that once we crossed into New York the terrain would again flatten and, if still necessary, we could slow down then.  DAMN THE RATED RANGE!  FULL SPEED AHEAD!

Cresting the last major peak overlooking Tioga, PA, I cast a leery eye at the navigation and did some quick calculations.  We. Would. Make. It.  AHHhh....   Descending into New York the buffer stretched out again with solid green regen all the way down and across the state line.  We maintained our brisk pace and pulled into my in-laws' driveway with exactly 40 miles rated range left.  I could not believe it was so pinpoint accurate.  Maybe I abandoned that automotive engineering career too easily?!  No, I'm sure it was the car's genius that did the calculating... not mine.

Euphoric with the accomplishment of a smooth first Supercharger-free trip, I couldn't miss this opportunity to make a mistake.  Once my father-in-law had seen the car for the first time and settled into the passenger seat I offered to take him down the road a little bit so he could "see what she'll do".  Well, apparently when you get down below 40 miles of rated range... she don't do much.  Oh sure, the Tesla was still loads faster and smoother than our Chrysler (and his Kia minivan, which is nearly the same weight as the Tesla) but it wasn't the "HOLY CRAP WHERE ARE THE GRAB BARS?!" type launch experience I was expecting.  Er...  it really is more amazing than this, I swear it!  He seemed impressed enough but I still owe him a barely contained profanity-swallowed scream.

We unloaded all our various belongings (the frunk-based ones always bring a smile to my face, just because WE CAN) and settled in for a home-cooked meal.  After dinner I carefully tip-toed the Tesla down behind a warehouse where their family business (recently sold so they could retire) had a NEMA 6-50 welder plug waiting.  Stretching it out around some mechanical debris and plugging it in with a borrowed adapter (thanks Jake!) brought me a delightfully juicy 40 amp charge.  I put Serena to bed.  We would be driving around the countryside soon and would certainly want to properly represent Tesla to the natives of upstate New York!