Winter has established a foothold here in Western Pennsylvania and we've already been pummeled by our first couple storms.  Over Thanksgiving weekend we made a trip up to my wife's family home in upstate New York and because of the quick turnaround and cold weather we opted to take our Chrysler.  It made the journey just fine but the fact that we took it speaks to a glaring (in our usage) hole in the Tesla Supercharger map...  and brings me to the subject of my next series of posts:  Traveling off the Supercharger routes. 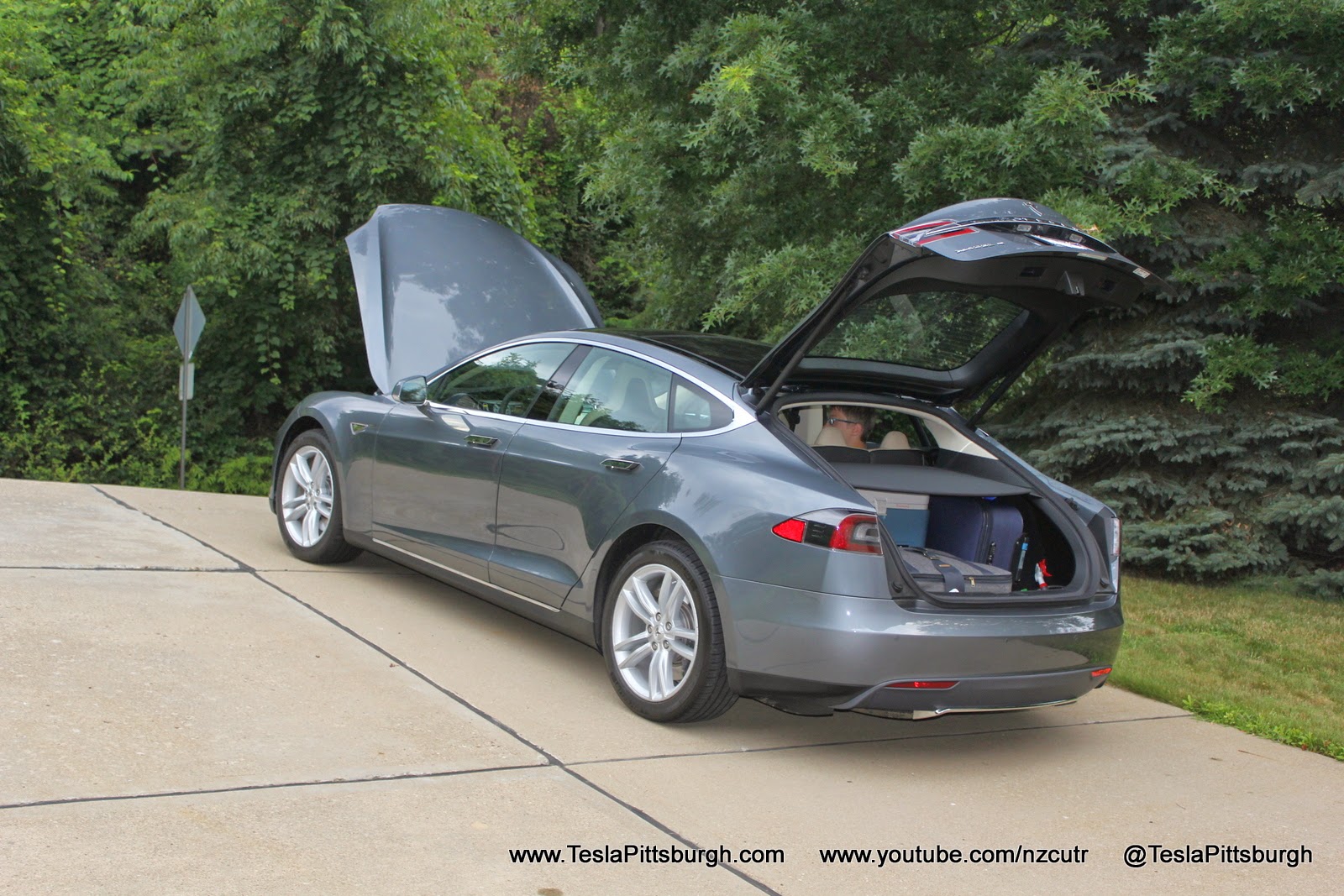 Fortunately for me, we've already done this trip with the Tesla.  Whew.  No "extra" road trip needed!  Back in July we loaded up Serena from stem to stern (what other car can claim that capability?!) and headed out straight through the heart of Pennsylvania where no Tesla support can be found.

It will be years before electric fast-charging infrastructure can rival that of gas and while that is a non-issue for most of our daily driving, long distance trips require more thought.  Many owners liken it more to flying-- with advance consideration given to where charging can be done and sometimes making arrangements to do so, almost like filing a flight plan.  Likewise, deviating from your charging plan can be problem...  though you're less likely to be shot down or intercepted by Homeland Security.

The route we normally would take is to follow the highways up to Erie, PA and then across the bottom of New York on I-86 to the family homestead about 30 minutes sound of Ithaca.  We've gone all the other routes over the years, of course-- often because of one weather system or the other-- but this is the preferred route because it is has less traffic and more scenery.  There was much discussion about whether or not to take the Tesla but in the end it came down to a "if we really believe it is better, we should do it" approach.  After all, the road trips we'd already done on the Superchargers had been pretty smooth and we knew we could destination charge this time.  We just had to get there.  And back. 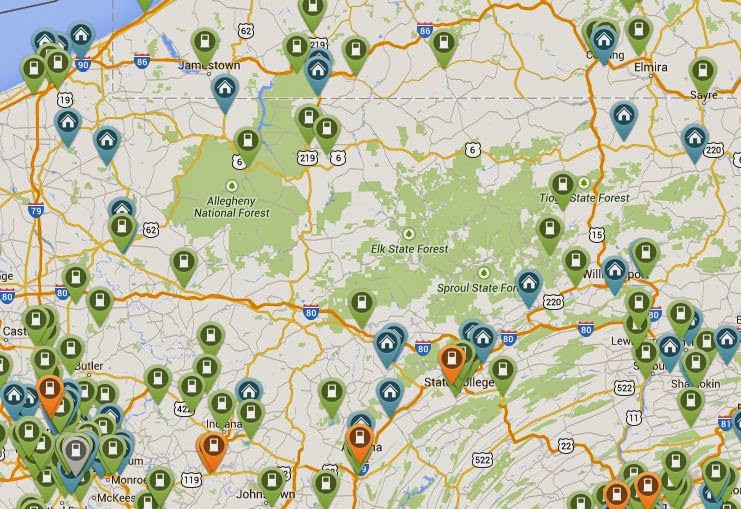 Hoping for a miracle, I checked the Supercharger maps daily but finally had to give up my dream of a DuBois or Clearfield, PA supercharger mid-route that could make the trip super easy (though these had been "coming soon" since before we ordered the car).  The next stop was Plugshare.  At first glance it looked like we'd have lots of options but narrowing down the results to chargers that would be fast enough cleared the map dramatically... and that would determine our only route option.  Compare the adjoining pictures for a sobering before/after. 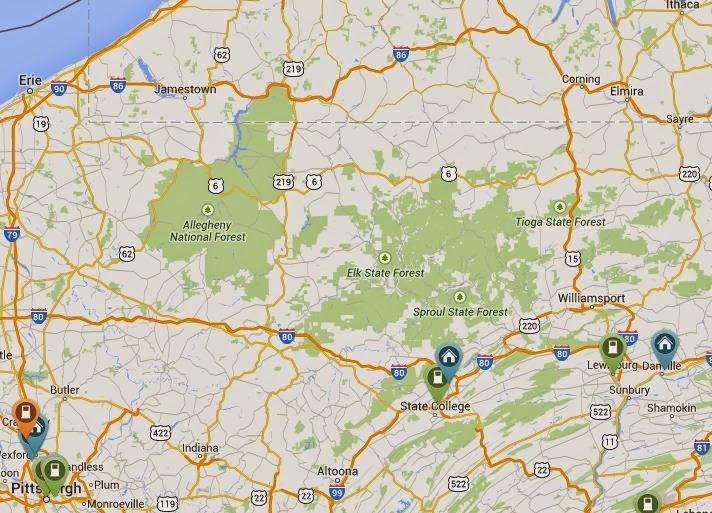 It isn't until you start doing the math that you realize how amazing the Superchargers are.  Our trip would be about 320 miles.  Add in a suitable cushion for the elevation changes and it was clear we'd need to charge-- somewhere-- to the tune of about 100 miles additional range.  Doing that on a Supercharger would barely be enough time to cycle all four us through a coffee shop bathroom.  Drop that down to a NEMA-50 and we could probably BUILD a bathroom while we waited the 3+ hours.  That left the Tesla HPWC as our best bet, if we could find one and guarantee we wouldn't find it occupied (adding waiting time was a deal-killer).  Even so, the two hour charge time wasn't very popular with my wife on top of a drive time that would already be pushing 6 hours.

When we configured Serena, I went back and forth debating whether or not to get the dual charger option.  I couldn't envision any downsides other than costs (it is horrifically expensive to retrofit compared to getting the car built with a second charger installed) but I also wasn't sure if we would ever need the faster capability.  As it turns out, I'm still unconvinced but it is worth noting that this trip wouldn't have even been considered without dual chargers.  Without them a moderately inconvenient 2 hour lunch stop would have become a wife-denying 4 hour festival of boredom and regret.  It was also why I had to be sure that I was going to get the most power possible shoved through both chargers.

Tesla doesn't sell a lot of cars in the middle of nowhere-- but I figured if they had, that owner would likely have a HPWC for their own convenience.  Splitting the total distance in half put us in the area of State College, PA, which was (coincidentally) where Plugshare indicated the chargers were.  While there were four HPWCs listed in that vicinity, three of them (including one at Bucknell University) were not getting full power and therefore no better than a NEMA-50.  The last one was in Bellefonte, PA and would require almost no deviation from our route-- it seemed perfect.   I contacted the owners and hoped they could help us.

After a quick back and forth (and despite my copying down their phone number incorrectly), we had our charging plan laid out.  We'd fully charge at home, drive 160 miles to Bellefonte (which should drop our rated range to about 100 miles), charge back up to 200 miles rated range and then drive the remaining 160 miles to our destination where a NEMA 6-50 was waiting for us.  Any shortfall on the first leg would mean a longer charging stop so we would be strictly adhering to speed limits and eyeballing the generous telemetry that the car provides.  We should have a ongoing range margin around 40-50 miles... which seemed pretty conservative.  Safety first! 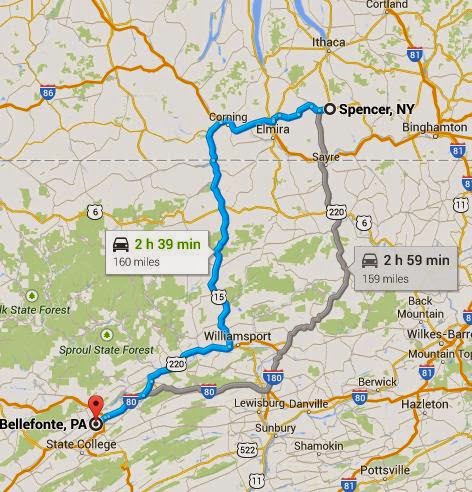 Adding that 100 miles of range-- even with a HPWC-- would mean a layover of about 2 hours.  I figured we'd charge at about 60 mph and with a little taper and civility thrown in (meet/greet/goodbyes with our charging hosts) it would work out to two hours off route.  We normally made the trip with 1-2 to stops for food/fuel anyway, so in reality we were only prolonging our "in transit" rest stops by a little over an hour.  With fuel prices pushing $4/gallon the argument could be made the driving electric would still pay for itself (we'd save at least $120 in fuel costs for that one hour extra-- and we certainly don't earn money that quickly otherwise)...   But I'm not going to belabor that point because WE ALL KNOW the Tesla isn't cheap to buy.  It would take a LOT of road trips so cover the purchase price in fuel costs alone (the car earns its keep in many other ways).

Tired of looking at charts and doing mental calculations and content that I'd covered the bases, we prepared to take our Tesla into the beautiful Finger Lakes Region of NY.  With easy charging at my wife's parents' house we could make day trips in and around Ithaca (including to Ithaca College where we met) with all the powerful whooshing about that we enjoyed back home.

To be continued....  Click HERE for Part 1: Sticking to the Plan.