I love traveling.  Going places, seeing things, meeting people...  It really stimulates the grey matter "more betterer" (as we say in the TV biz) than just about anything else.  And yet, waking up on the morning I get to go home is always a special feeling. 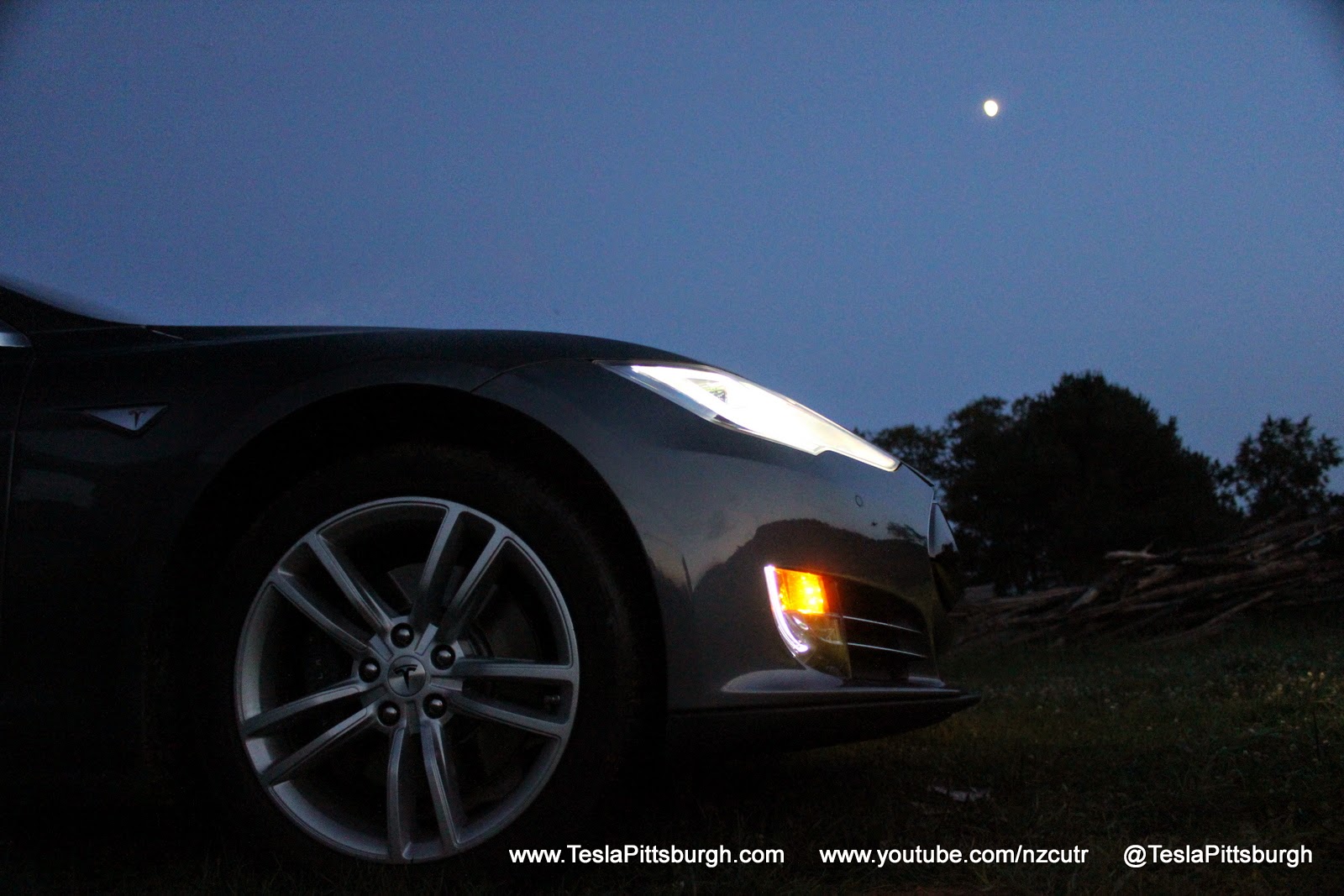 A mixture of melancholy for the adventure drawing to a close, anxiety for the potential travel tribulations, excitement for the last vestiges of discovery the trip might reveal and the hope of my next night's sleep to be.. in.. my... OWN BED.  Oh yes, truly: Be it ever so humble, there is no place like home.

Waiting down by the warehouse, in the dark, was our ride home.  Fully charged, ready, and finally...it was time to go.  We were going home.  HOME.

The plan was holding together perfectly by the time we again entered the outskirts of Bellefonte in time for an early lunch.  We were showing 100 miles of rated range left and were looking-- again-- to pick up a charge of another hundred before making the last leg of our trip to Pittsburgh.


Since we knew the way, we rendezvoused with our charging hosts in the alley behind their historic house.  It's not my place to divulge where exactly we charged, but it struck me as very amusing to see all the technology that a Tesla represents tucked into a garage of a house from the Civil War era. 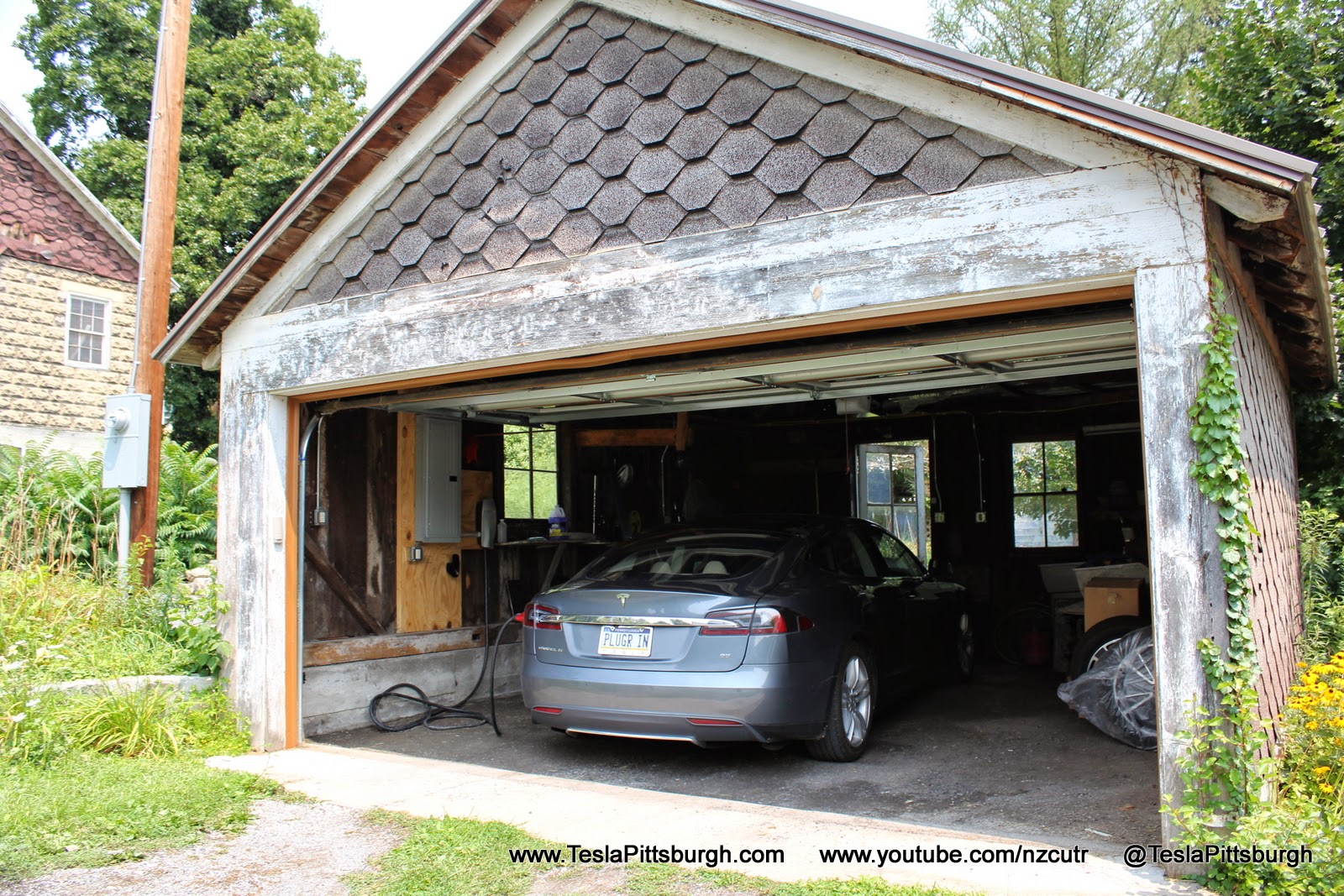 Unlike our first stop, this time we opted to explore this quiet little town instead of holing up with our hosts in another local eatery.  We'd left the grandparents' place with the typical large stockpiles of goodies filling the available nooks and crannies of our frunk n' trunk.  It was a beautiful and mild day so we cobbled together a suitable lunch before heading out on our sightseeing walk.

Bellefonte is situated north of the inventively named city of State College.  French speakers will note that Bellefonte isn't a particularly inventive name either, considering the discovery of a natural spring there (a "belle fonte").  For a long time it was a far more prominent and important place than the fields where Penn State grew up.  The town features a wide array of Victorian architecture and as we ambled around the downtown area every turn seemed to lead to yet another block of gorgeous old houses.  For my friend, Jake, I should also point out that this pretty little town was recently voted the best fly fishing location in the state. 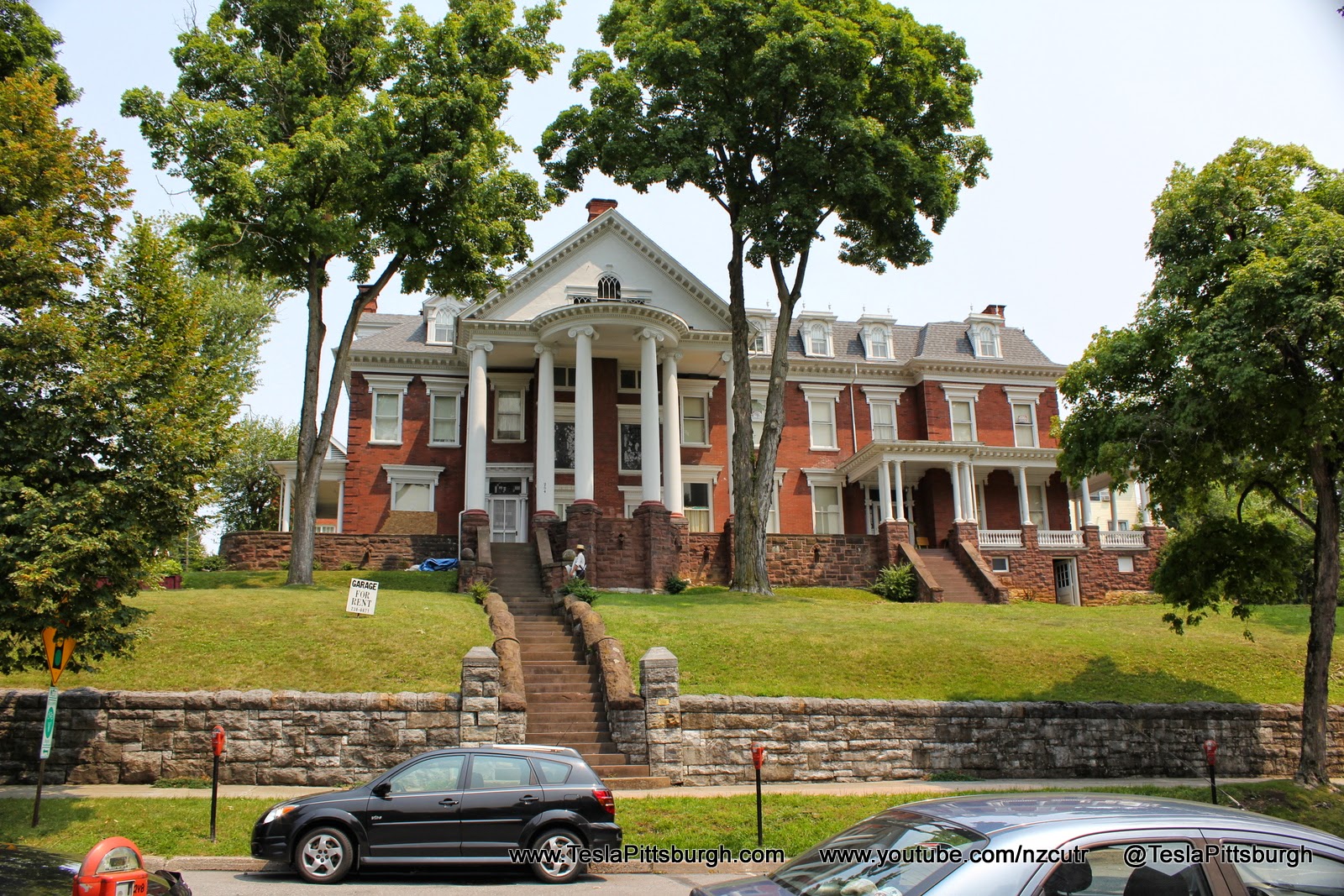 Among the huge old mansions of Bellefonte, this is one of the largest.  It belonged to Governor Daniel Hastings, who presided over Pennsylvania at the turn of the last century.  The portico is not original to the house and was styled to look like that of the State Capitol Building at the time, which burned down during Governor Hasting's tenure, in 1897.  Like most grand old mansions, this one has been broken up into apartments.  <sigh>  As a small consolation for architecture preservationists, there is the rumor that the new tenants might enjoy the company of rent-free ghosts too.

The focal point of the downtown area is the Centre County Courthouse.  Parts of the building date back to 1805, though it has been added to (not very sensitively) many times since.  If the square in front looks familiar, it's because you probably saw news coverage of the Jerry Sandusky/Penn State sex abuse trial in 2012, which brought international media swooping down into the narrow streets here.  This was the first time I'd seen the street without satellite and news trucks doubled parked on it. 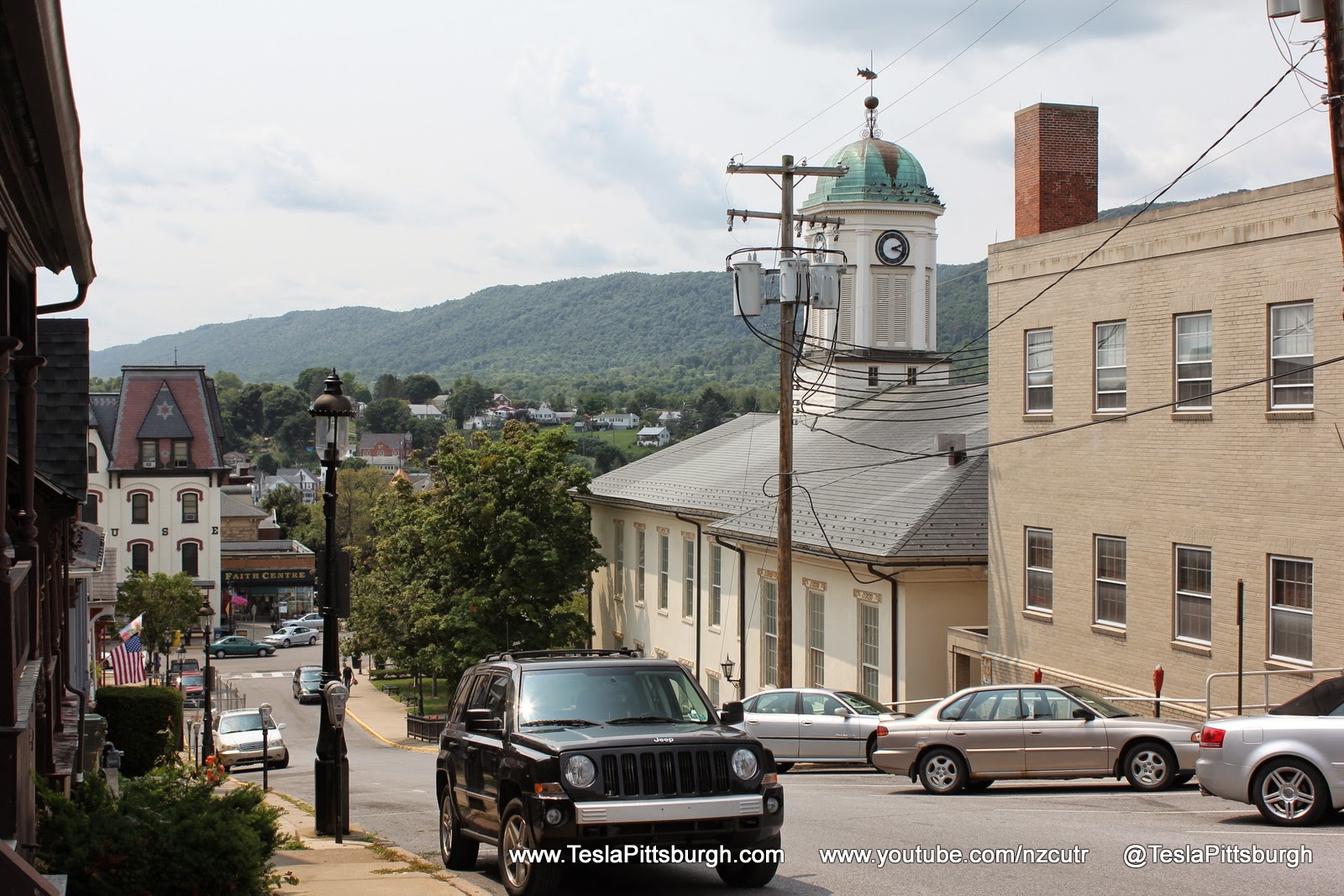 Climbing the hill beyond the Courthouse rewards with a wonderful view over the town and hills beyond.  You also get a sense of cheap government contracts in the office space added immediately behind the old part of the building.  To the left of the picture, on the opposite site of the Diamond intersection, you can see the Brockerhoff Hotel.  The Brockerhoff has an impressive roof and detailed painting.  Mostly residential on the upper floors with ground level retail, you could plop this building down in any number of European cities and it would blend right in. 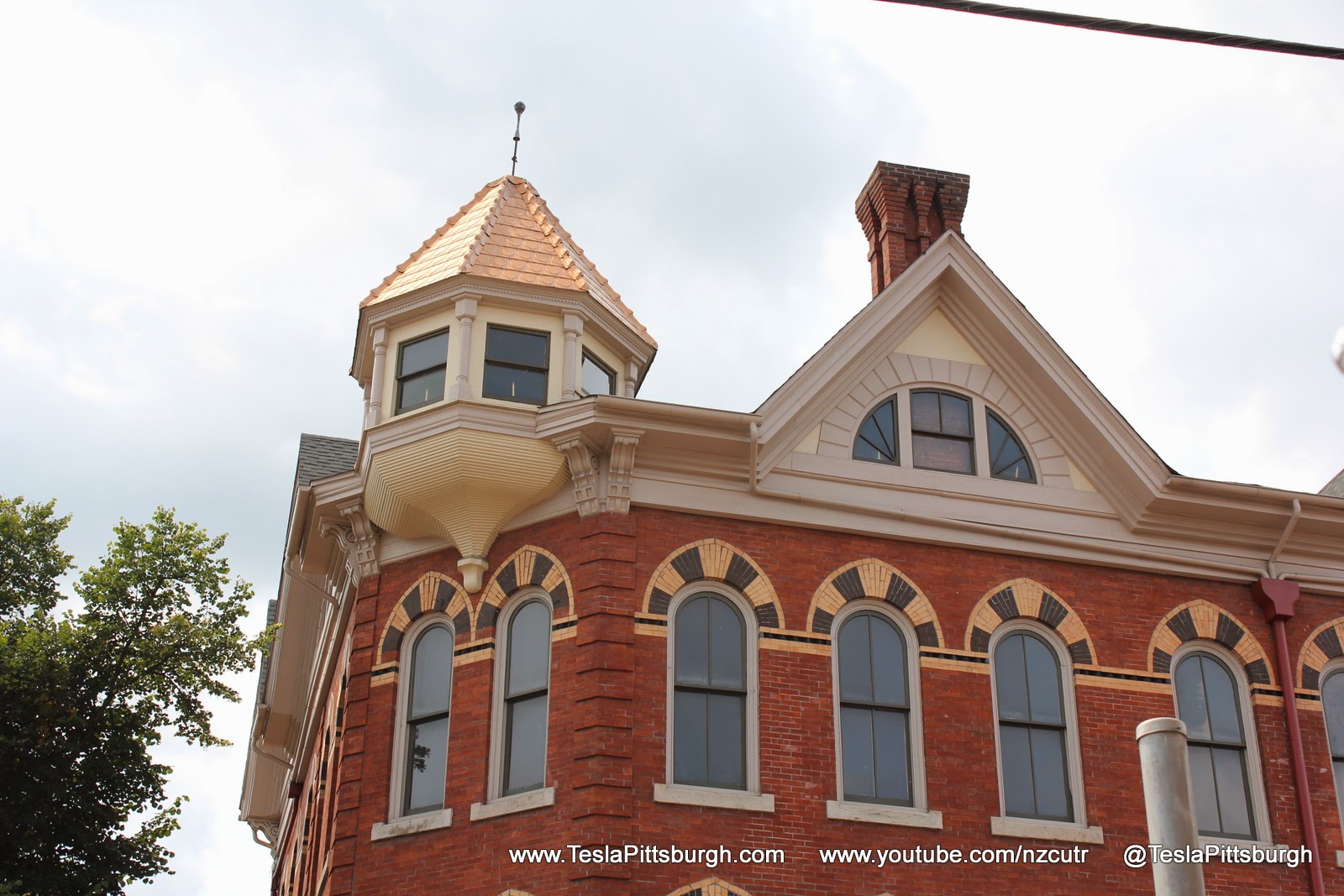 At the bottom of the hill is a large building on the corner, presumably called the Linn Mansion.  It was once the home to an influential pastor, converted into a bank and now is office space.  The brickwork and decoration on the building are really eye-catching.  I found myself taking pictures of its gleaming copper roof on both our stops in town.

This is by NO MEANS a comprehensive tour of Bellefonte's impressive array of Victorian architecture.  If you're in the area it is definitely worth a quick loop through the downtown area or you can find more pictures and information on the superb Bellefonte Historical and Cultural Association's website.

Climbing back aboard our aluminum cruise missile with 200 miles rated range ready for use, we turned again towards Pittsburgh.   Roads were mostly clear and the weather bright as we went along and our spirits were buoyed further by well-wishers.  Waves, stares, pictures and thumbs up were all around us-- it was like a press release had been sent out in advance:  "Tesla Driving From Bellefonte to Pittsburgh TODAY!"

We'd seen these kinds of hails before but not so frequently!  Perhaps this was the electric highway less traveled?  Many greetings weren't caught by the dash camera but a few thumbs up did make it into our frontal view-- hopefully you can enjoy them too if you look carefully!

This beige Taurus had stalked us from behind for a few miles as we climbed a hill, but as the regenerative brakes held our cruise control rock steady on the downhill, the Taurus went by.  The passenger had his head completely out the window as he passed my flank, with a big grin and thumbs up.
About an hour later a pair of motorcycle tourers paced us through a construction zone.  I could see them gesturing to each other and as the zone ended, they both passed with a flourishing across-the-body thumbs up, each.

We arrived home-- EXACTLY to the same plan our our trip to New York--  with 40 miles rated range remaining.  It was a good trip.  It is an amazing car.  We are awaiting an equally amazing build out of the Supercharger network so that future trips can be done with minutes charging instead of hours-- and yet, were it not for being an early-adopter, we'd have missed visiting Bellefonte completely.

The hidden downside of the Superchargers is that they'll determine routes ON the beaten paths and electric travelers won't be forced to venture out onto the side roads to charge.  Instead of seeing small towns and meeting the locals, we'll stay closer to the interstates and talk only with other Tesla owners while we charge.  Did you see the movie "Cars"?  The expansion of the Supercharger network will do the same thing for the Plugshare crowd-- sooner or later-- as other networks rise to compete with Tesla's.

Small towns should bask in the patronage of weary electric travelers while they can.  The rEVolution has begun, but the clock is already ticking.  This is merely a brief glimpse back to the bygone era of pre-interstate highway travel.  Look closely while you can.

This is the end of this series of posts -- I hope you enjoyed them!  If you dropped in only part way through, click HERE for the beginning of this trip.