Get Your Juice Loose

The gas crowd has a leg up on us.  There, I said it.  Every time they go to fuel up their cars they find each dispenser to be road-accessible, surrounded by ample room to park and the hose on the dispenser can reach either side of their car.  But wait-- don't go trading in your Tesla just yet!  You can still run over the river and through the woods to Grandma's house... just remember to pack this: 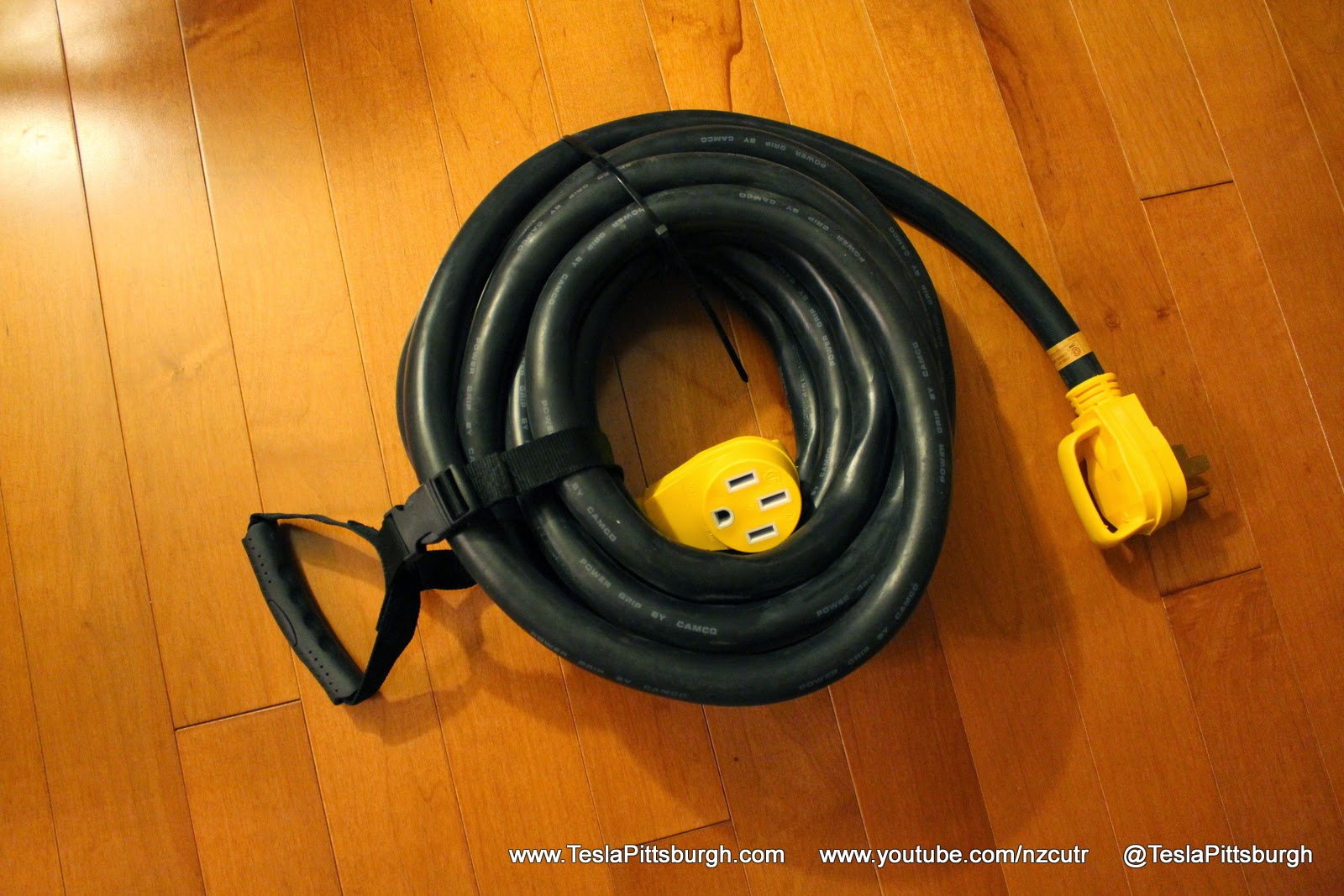 Whether you're digging behind bushes to access your parents' dryer outlet or carefully inching your Model S close to rusted farm equipment in hopes of reaching an ancient welder's plug at your crazy uncle's place, remember that the juice you use is cheaper than gas and the car is a lot more fun!  What you need then is a way to bring the power more conveniently to your car... and this is the solution.
Camco makes a number of heavy duty electrical extension cords and plug adapters and are based in North Carolina.  However, Tesla does not endorse the use of anything other than their own HPWC or UMC, just so we're clear.  Unfortunately my friend's HPWC won't reach from Pennsylvania to New York and the UMC is similarly limited.  Even in my own garage it can barely make it from the nose of the car to the tail and many times parking away from home but within the car's own length of a plug isn't possible. Given that you will sooner or later have to "plug'r in" farther than your cord will reach, the question is how to do so safely.  Let's rule out a Doc Brown inspired hood-mounted solution and try to match as closely as we can the wiring that the outlet itself would have.  A fully permitted and legit 50 amp outlet (NEMA 14-50) is what most of us have for home charging.  Depending on local codes you might have 8 gauge wire in there but typically codes will dictate 6 gauge for a continuous 40 amp draw while charging.  The Camco PowerGrip cord uses the same 6 gauge wire wrapped in an impressively rugged covering.  Same wire, same plugs, same performance.  Your Tesla won't even know the difference from home cooking. Let's talk numbers (with apologies to vegan electrical engineers for my pedestrian approach-- though admittedly they are a small demographic).  If you're looking to buy a nice steak you can shop by the pound or by the cut.  Different prices apply to different cuts, obviously, but the hunk of meat you need remains the same.  The Camco cord costs about $100 for 30' which is about $3.35/foot (accounting for some loss due to the plug ends).  Current prices in my area for similar gauge, by-the-roll 6-gauge electrical cable (same stuff I use to juice my garage 50 amp plug) works out to $1.78/foot.  A handy fellow could probably make a similar cord for about a third less cost... but it won't have the same rugged construction and won't be as durable and safe.  Copious amounts of electrical and duct tape might approach the durability but by then you've emptied your 401k on tape.  That's not nearly as much fun as a trip to Paris in your 90s.  The premium cost to have Camco do it for you is only about 20% without accounting for your own labor.  That's a pretty modest upcharge for such a well built product.  A different cut of steak that's worth spending a few bucks more to get. 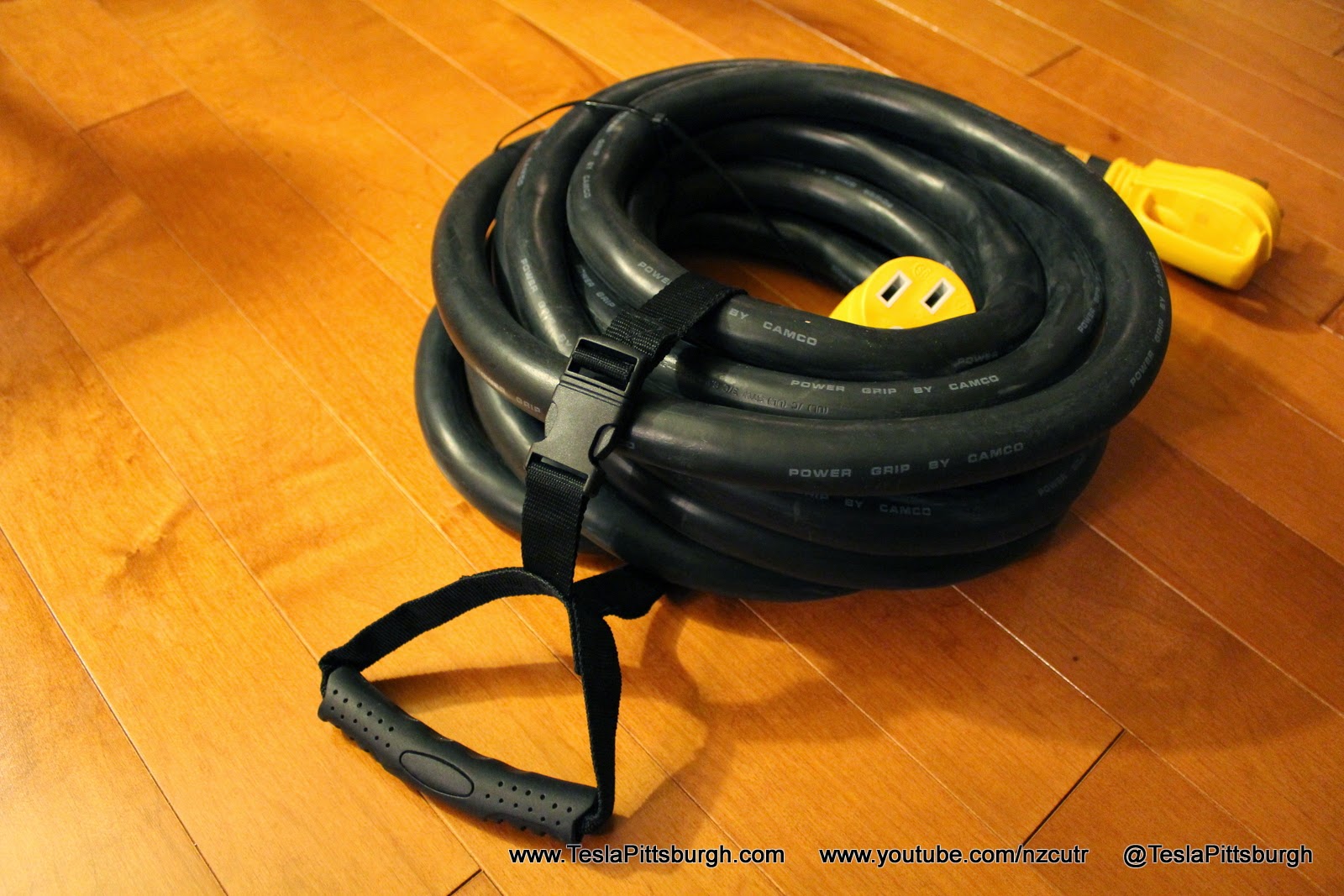 Camco makes this same extension cord in several lengths and in smaller gauges (like for a 30 amp run).  There's also a host of adapters and you can craft a very impressive knot of connections if you really want to freak out the spectators or impress your girlfriend.  My wife frowns on both approaches so we'll be keeping this review to the cord itself. 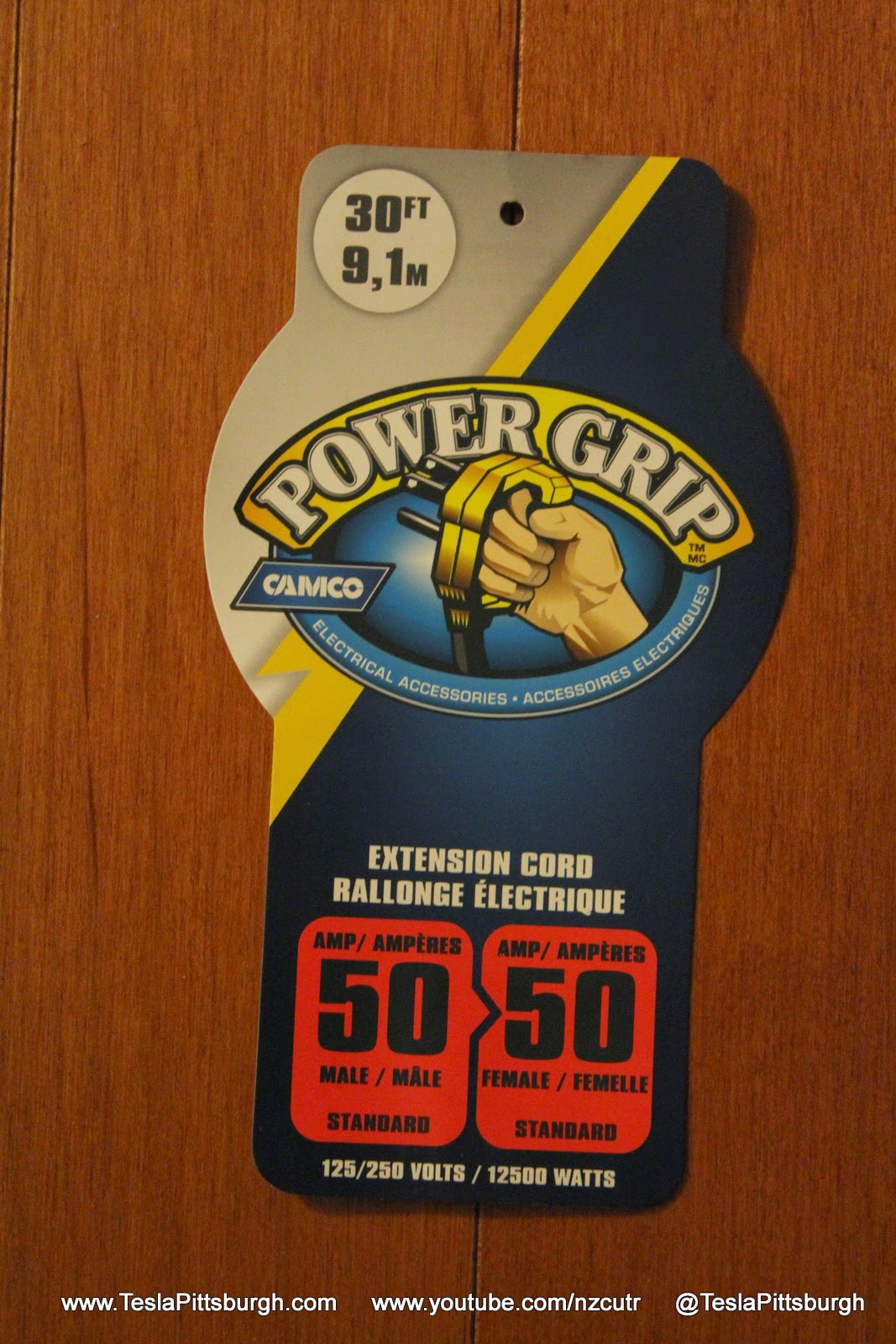 A "touted" feature of the Camco on its label are the "PowerGrip" handles on the ends.  Look at that muscled hand asserting it's dominance over all things electric! 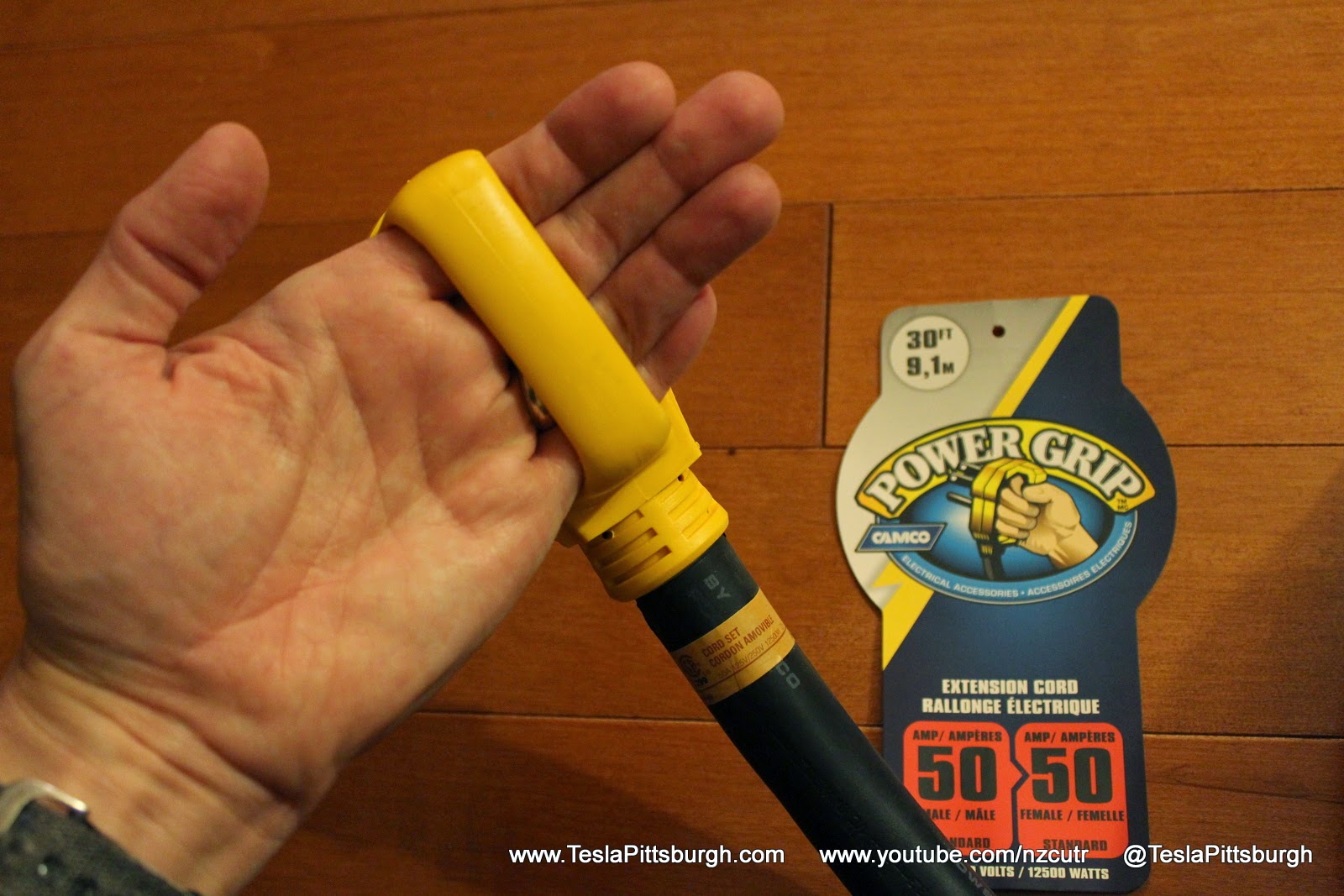 Reality bites a little bit in this case.  I'm not a huge guy and the PowerGrip couldn't fit my 4 fingers in it without visions of the fire department being summoned to pry me free with their Hurst tool.  You certainly could not wrestle the cord with any degree of comfort using it this way. 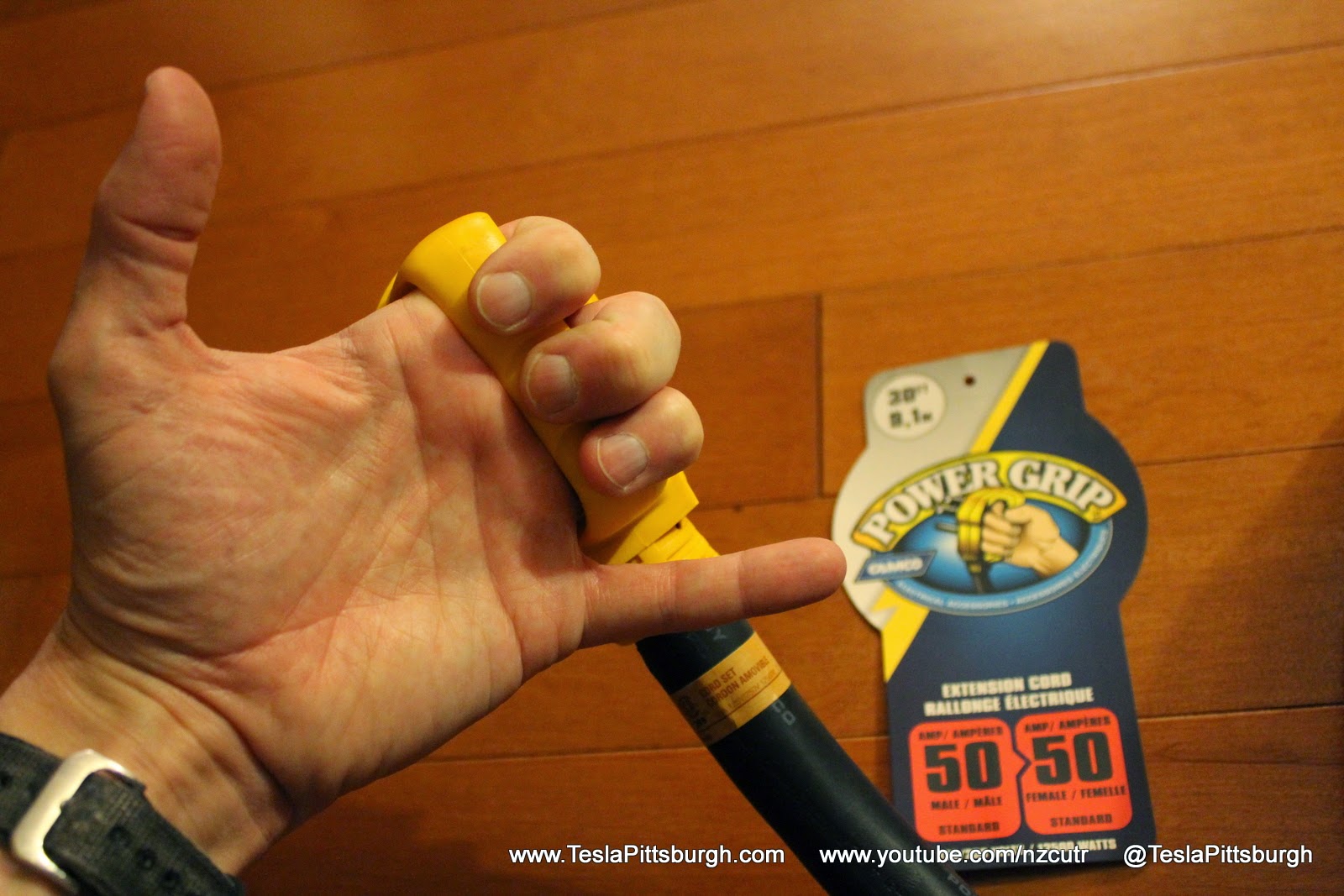 Take a moment to sit cross-legged on the floor and summon up your inner Californian (you've surely done this already if you're a Tesla owner in a snow state):  "Ommm.....Surf's up, dude!" -- and there, you've got it, the proper grip for the PowerGrip.  If you want to show off your sophistication, keep the pinky extended like it's high afternoon tea. 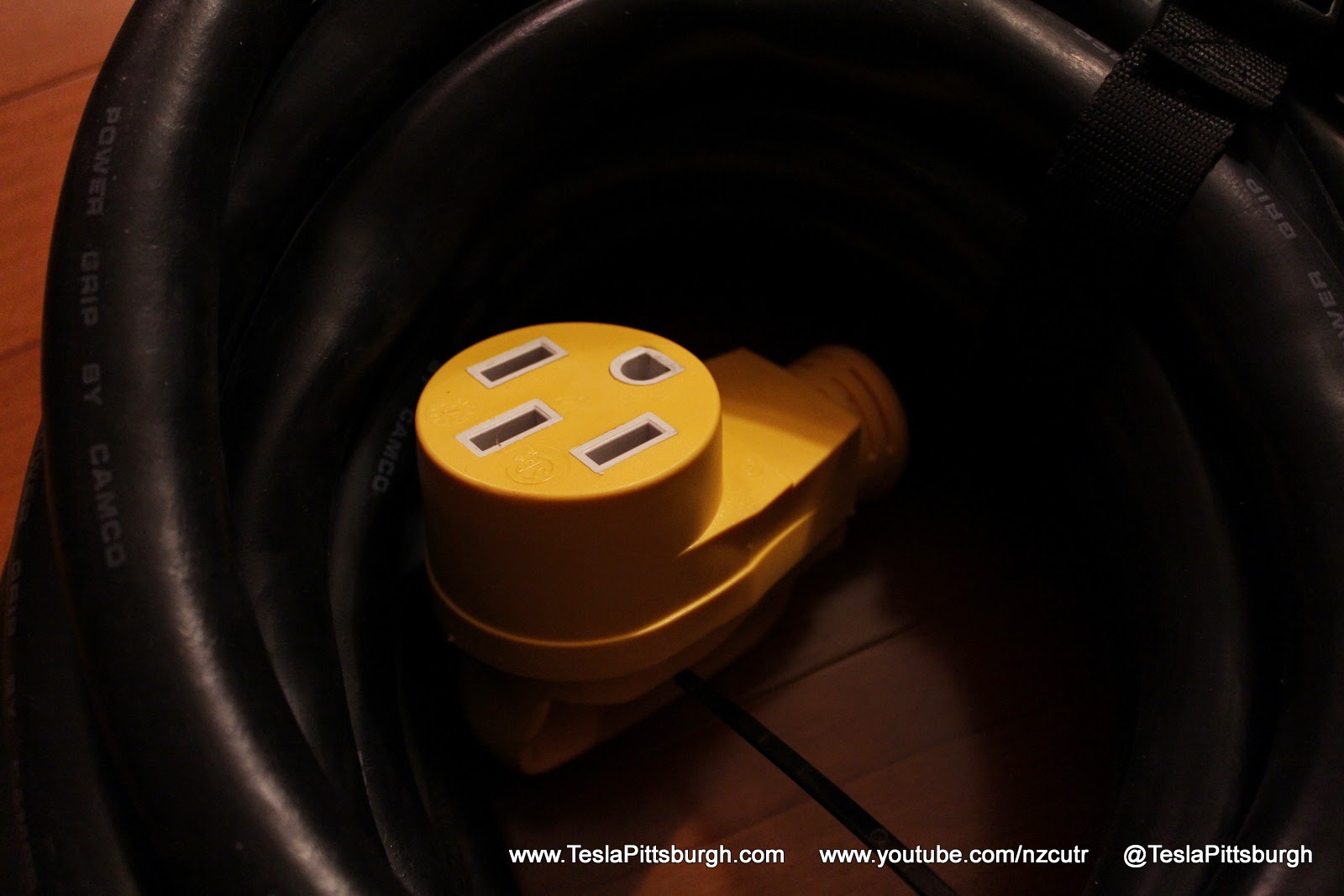 The 90 degree plug angles are potentially the biggest flaw in the product.  I've seen more than one stove outlet installed so close to the floor that plugging in wouldn't allow for enough clearance to bend the stiff Camco cord.  It's a small possibility but worth asking about before you dismantle your Aunt's kitchen in the middle of holiday feast preparations.  A bigger problem is the angle on the female end.  Whereas the male end provides some strain relief when plugged in to a conventional outlet, the female end just entangles the cord and costs you a little length.  I think it increases the chance for it being a tripping hazard and probably stresses the connection with the UMC unnecessarily.  A straight plug would be better for anyone who can't quite "get there"otherwise-- even better would be a way to positively lock the connection so it can't be worked loose. 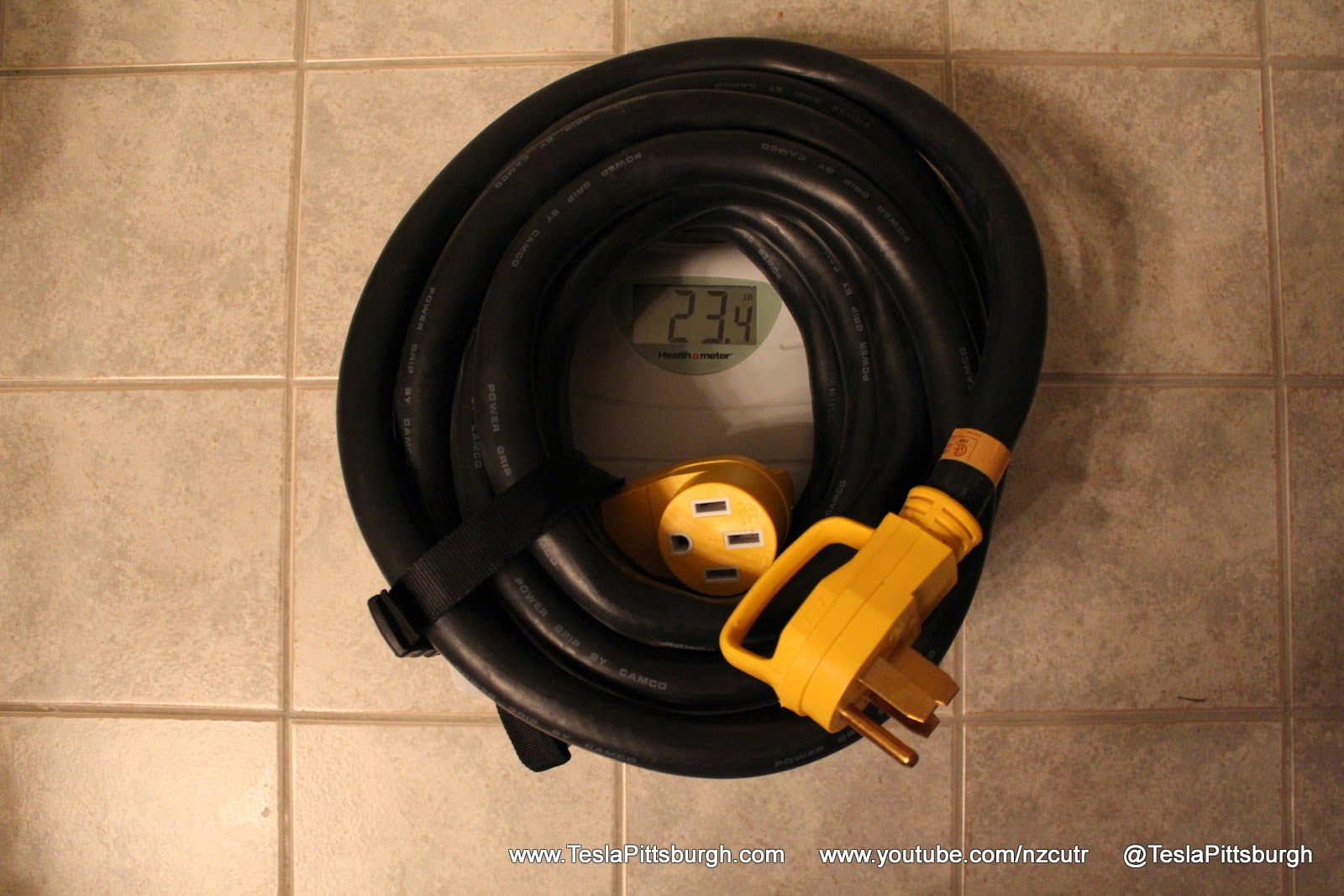 Thirty feet of power cord weighs in at about 23 1/2 pounds, but since the Model S is over 16' long it doesn't make much sense to bother with a shorter cord.  After all, if the problem can be solved by simply turning the car around you're not really gaining a lot of capability.  The shorter cords are still bulky to travel with but do have a weight advantage... but if you're running off to Grandma's house you're going to weigh more coming home anyway.  Potentially a lot more if your family can cook like mine.  If not, then a too short extension cord would be the least of your life's disappointments and I want you to instead picture me enjoying my gravy and pie... which I will ship to you for a generous donation towards a P85D. 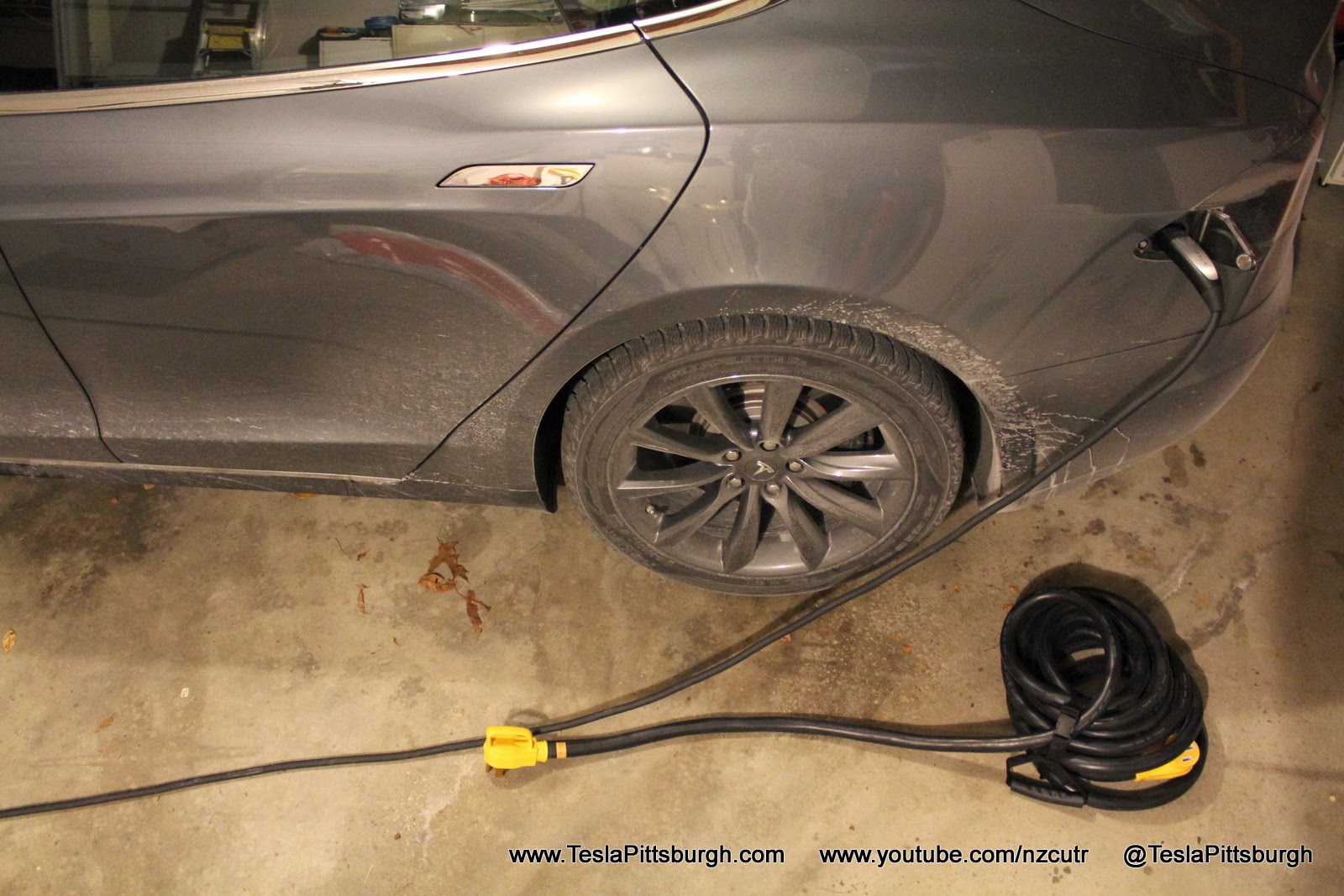 Speaking of bulk (and NOT speaking of my unspeakably dirty Tesla), check out the size differential between the two cords.  Even from Sasquatch height the circumference is massively bigger comparatively. 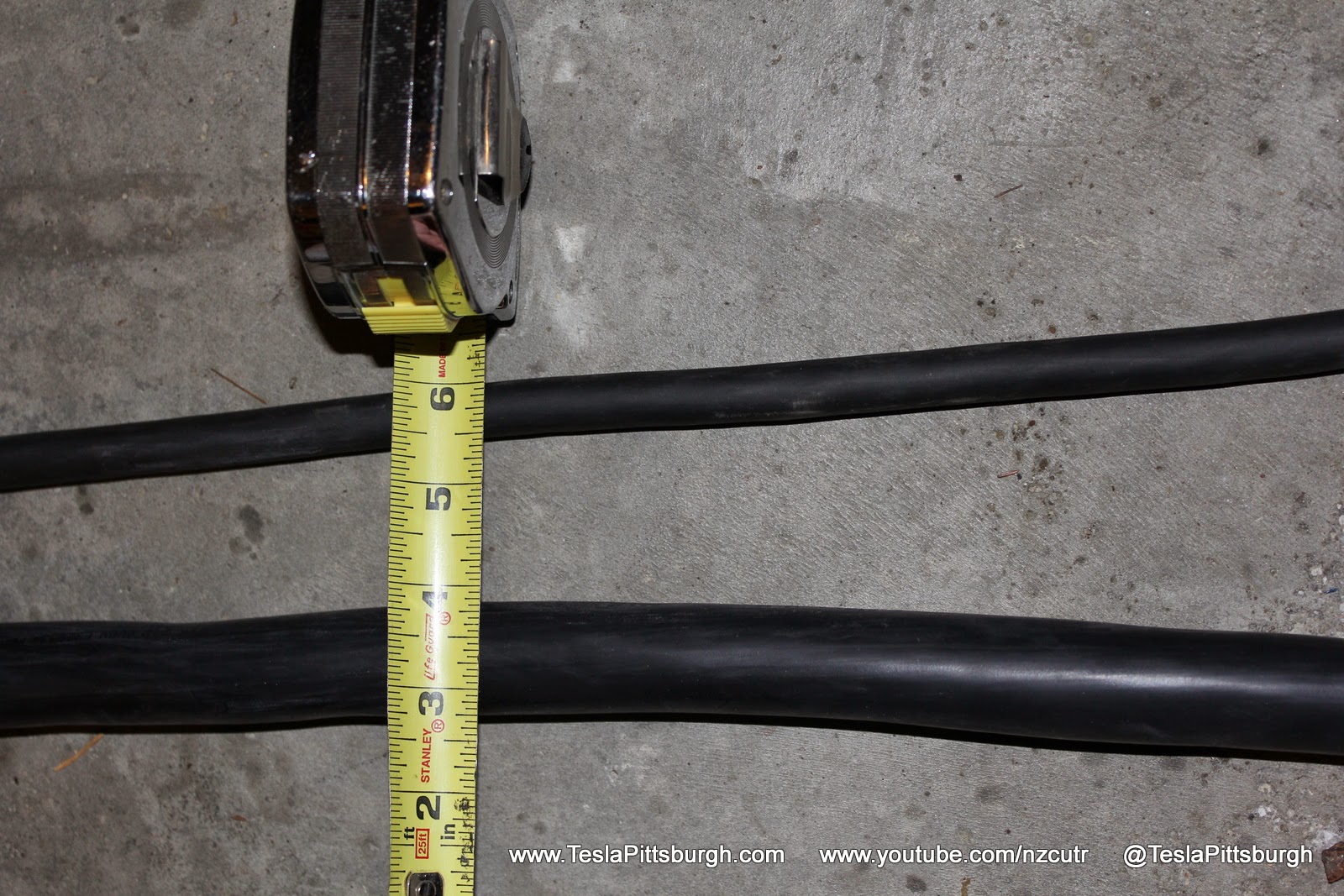 Grab a tape measure and you'll find your eyes don't deceive you-- the Camco is at least double the thickness of the Tesla cord.  That should put to rest any concerns of the wire overheating under prolonged charging but it does come at a cost: flexibility. 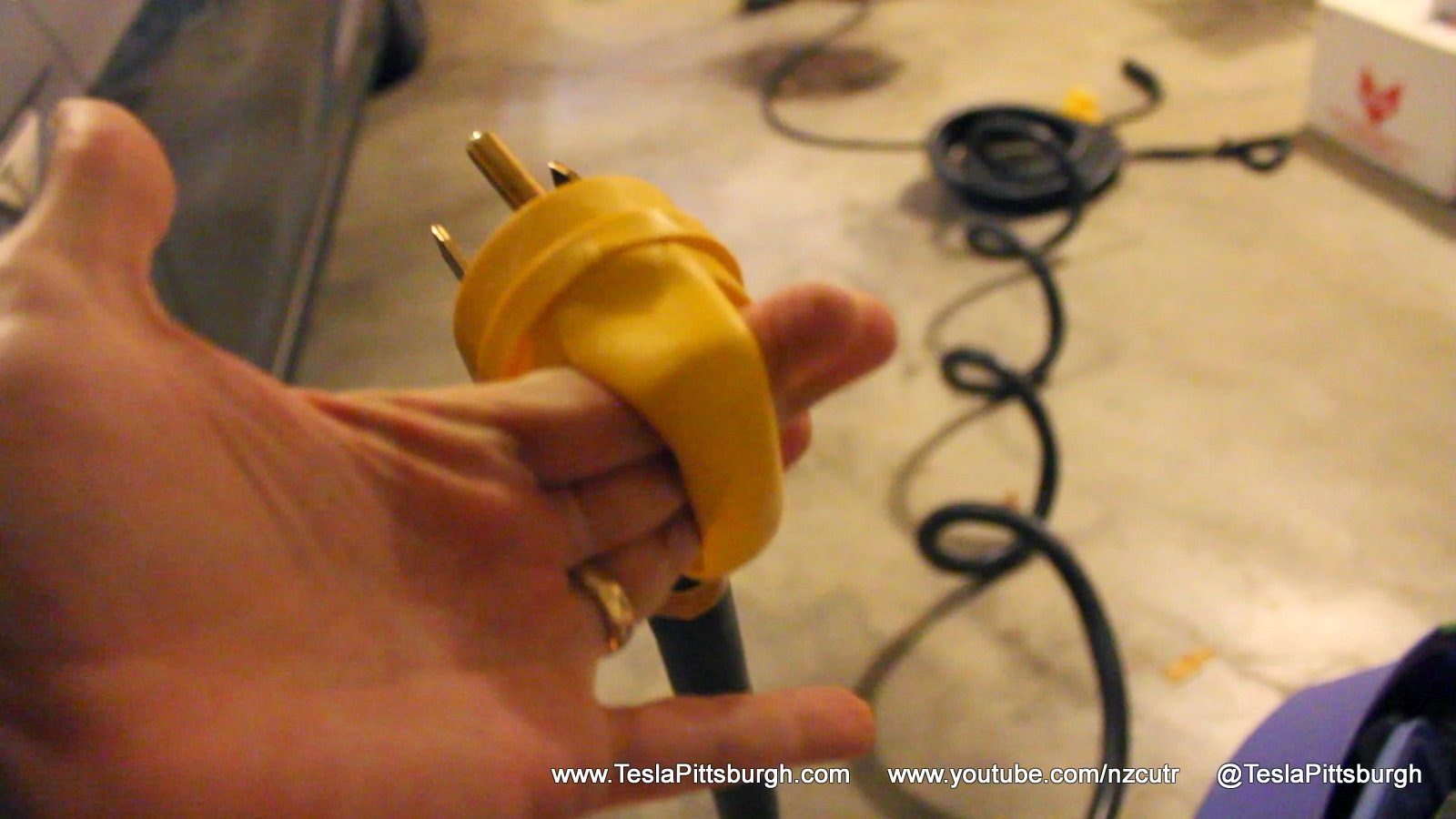 Stretching the cord out leaves lots of stubborn coils that will have you twisting the night away to take advantage of the full length.  I also have grave concerns about trying to jam a cold-frozen cord back into the car after a night's charge-- but again, both of these issues are not the fault of Camco.  Any extension cord of this size will have similar drawbacks.  This is a quality piece of kit and you'll have peace-of-mind dragging and scraping over all sorts of unimaginable obstacles that would shred the Tesla cord. 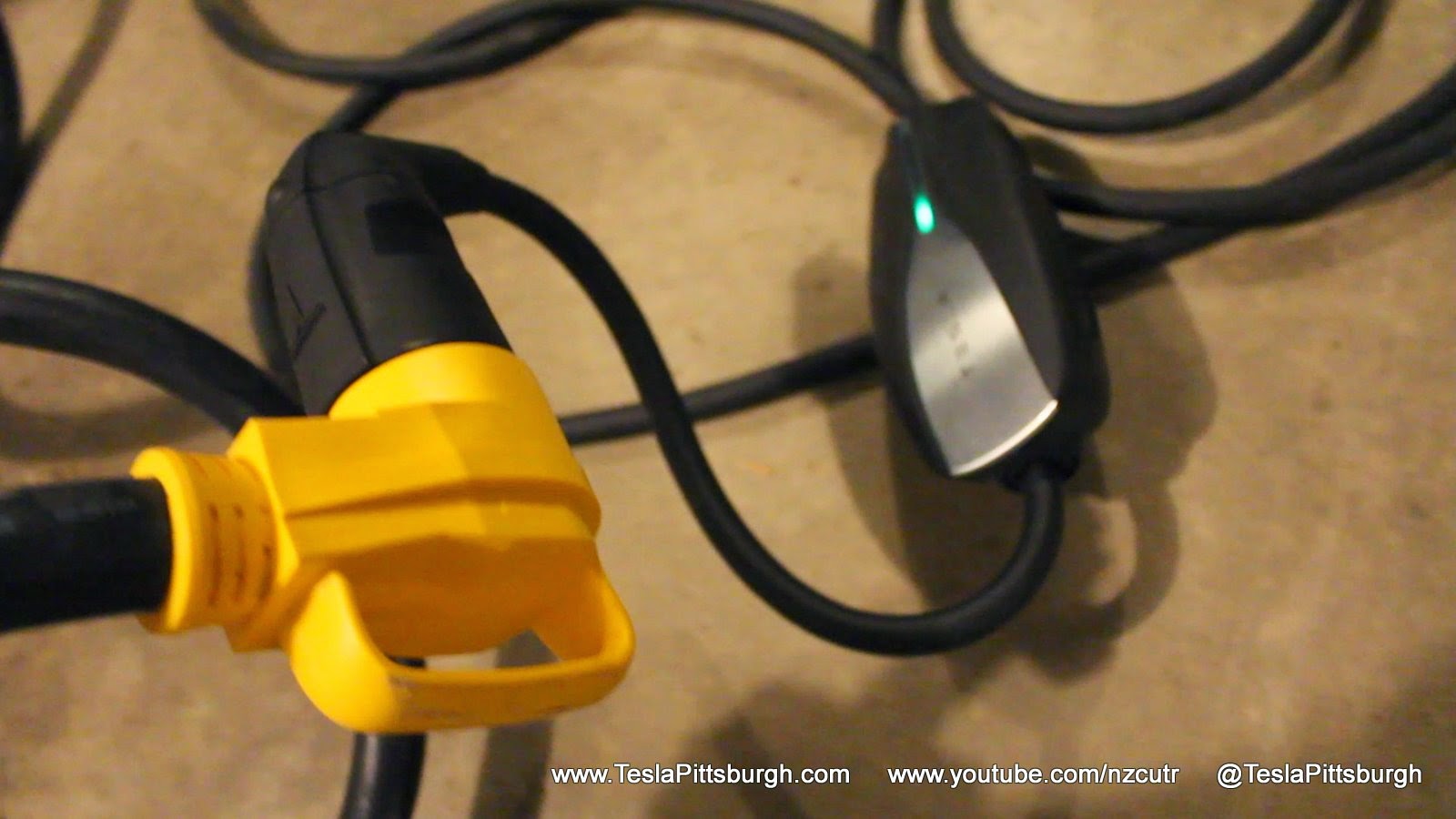 All plugged in you can see the 90 degree angle that works so well on the wall outlet end becomes a confused electrical interchange when connected to the UMC adapter.  They're both angled the opposite way from each other-- not a huge issue unless the resulting loss of nearly a foot of potential length is the difference between driving away or being marooned with a pouty face. 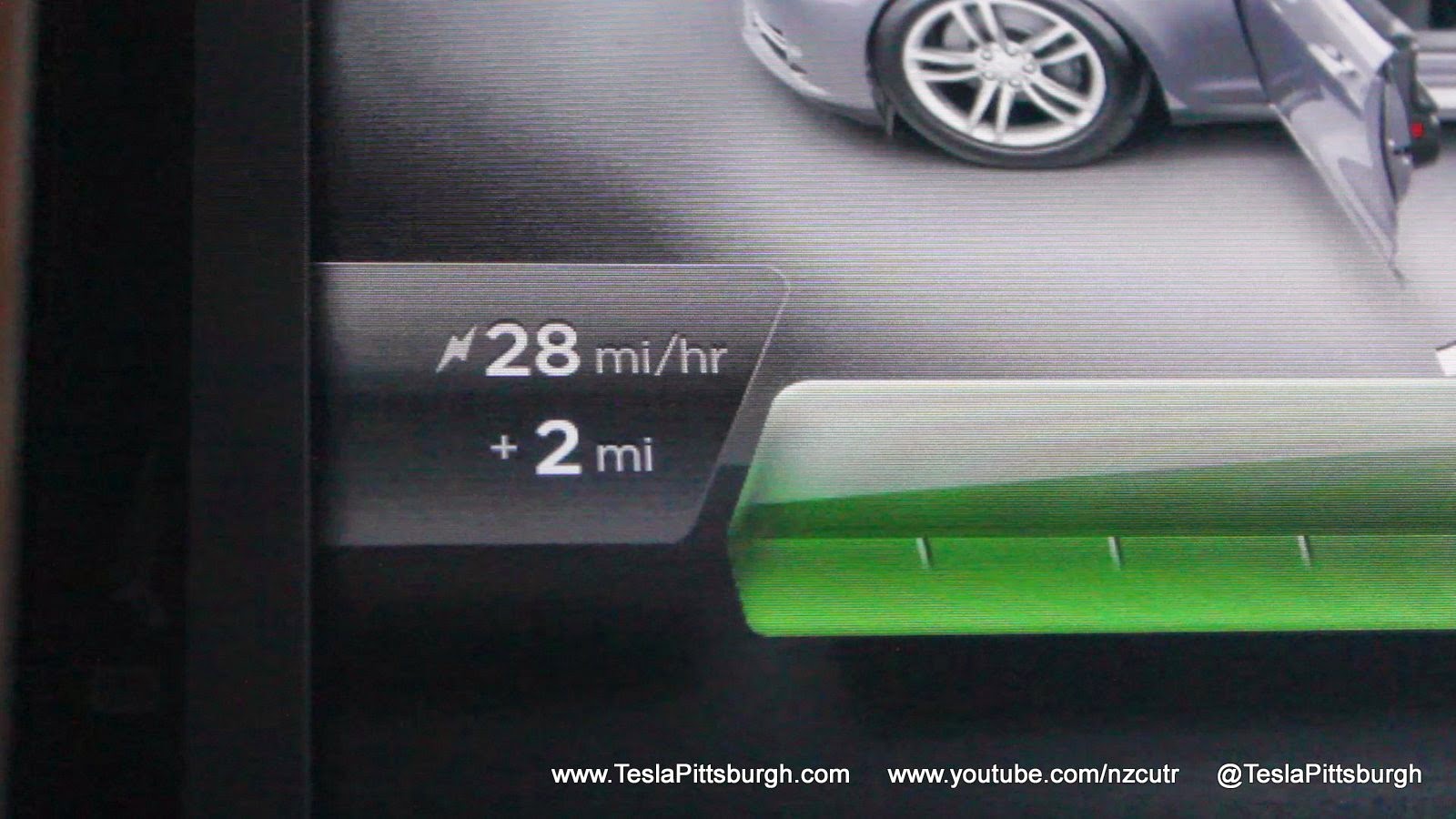 With the PowerGrip linked in between wall power and the UMC there's a price to be paid in energy loss on such a long run.  The car continues to pull 40 amps continuously and there are no overheating concerns but the amount of power getting to the battery is down to 28 mph charge rate. 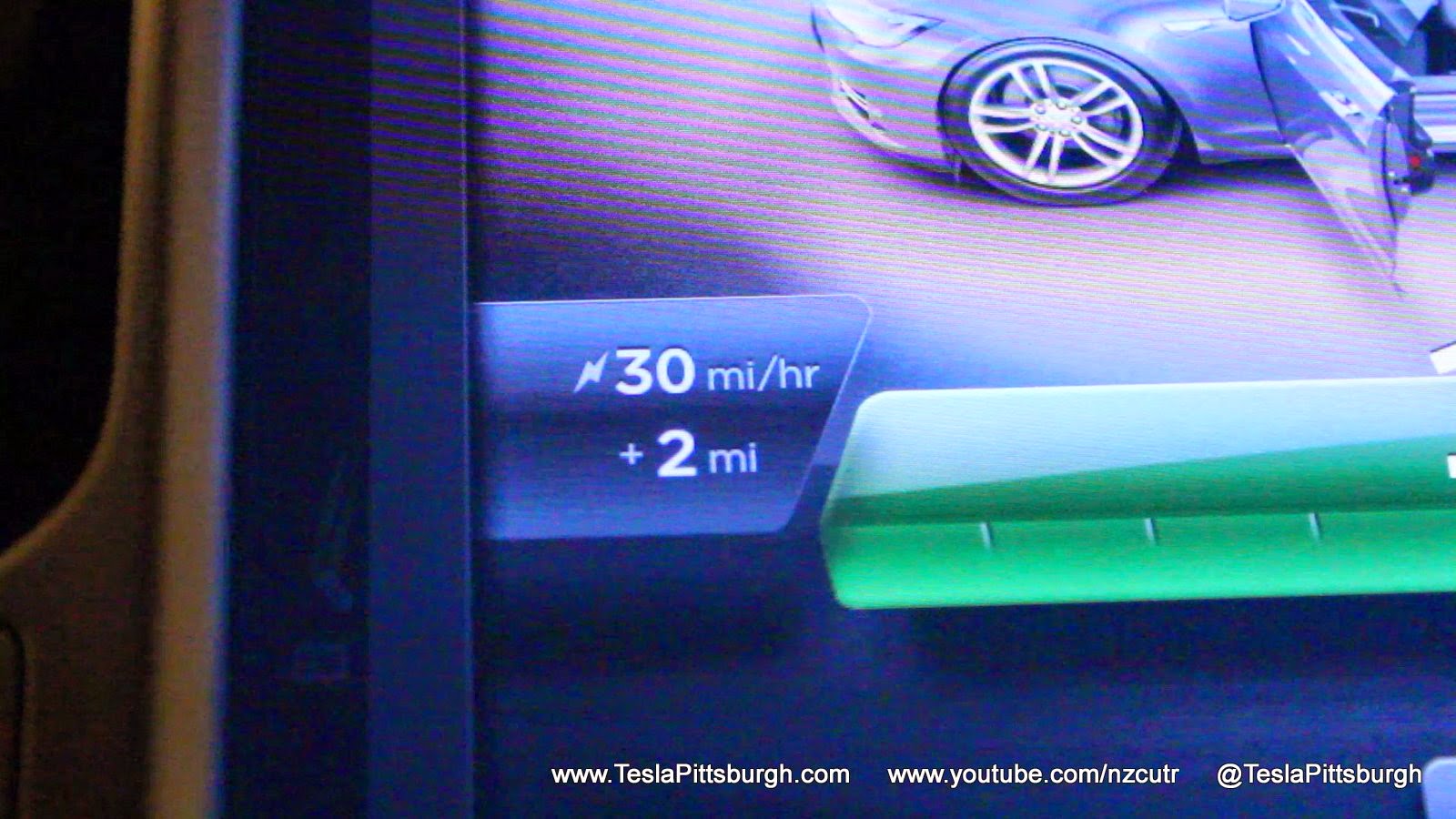 Just to verify I wasn't "mis-remembering" I redid the charge with the PowerGrip removed and at the same benchmark I was back to pulling 30 mph as a charge rate.   The 2 mph power loss doesn't seem like a deal-breaker to me.  From completely empty to completely full that would be a difference of 40 minutes, but as a destination charging solution I would expect to be sleeping anyway.  40 extra minutes?  Bring it!  I'd still be sleeping off the prior night's meal anyway. To better illustrate what kind of range extender the Camco cord really is, I moved Serena out from her cozy garage to the end of the cord plus the UMC.  The added distance gets me to the top of our "scary driveway"-- Oh, it is -- you should see it through the windshield on an icy/snowy day with the house ready to catch you at the bottom.   It's like someone designed this as a ski jump for the Pittsburgh Olympics and then inconveniently built our house at the end of it.  This does illustrate another use-- and using the cord as an inclement weather solution might be appealing to some of you (and it certainly is rugged enough for that) but for me, the likelihood of getting sideswiped by a snow plow or sledding car means I'll be doing this dangerous descent no matter what the weather. 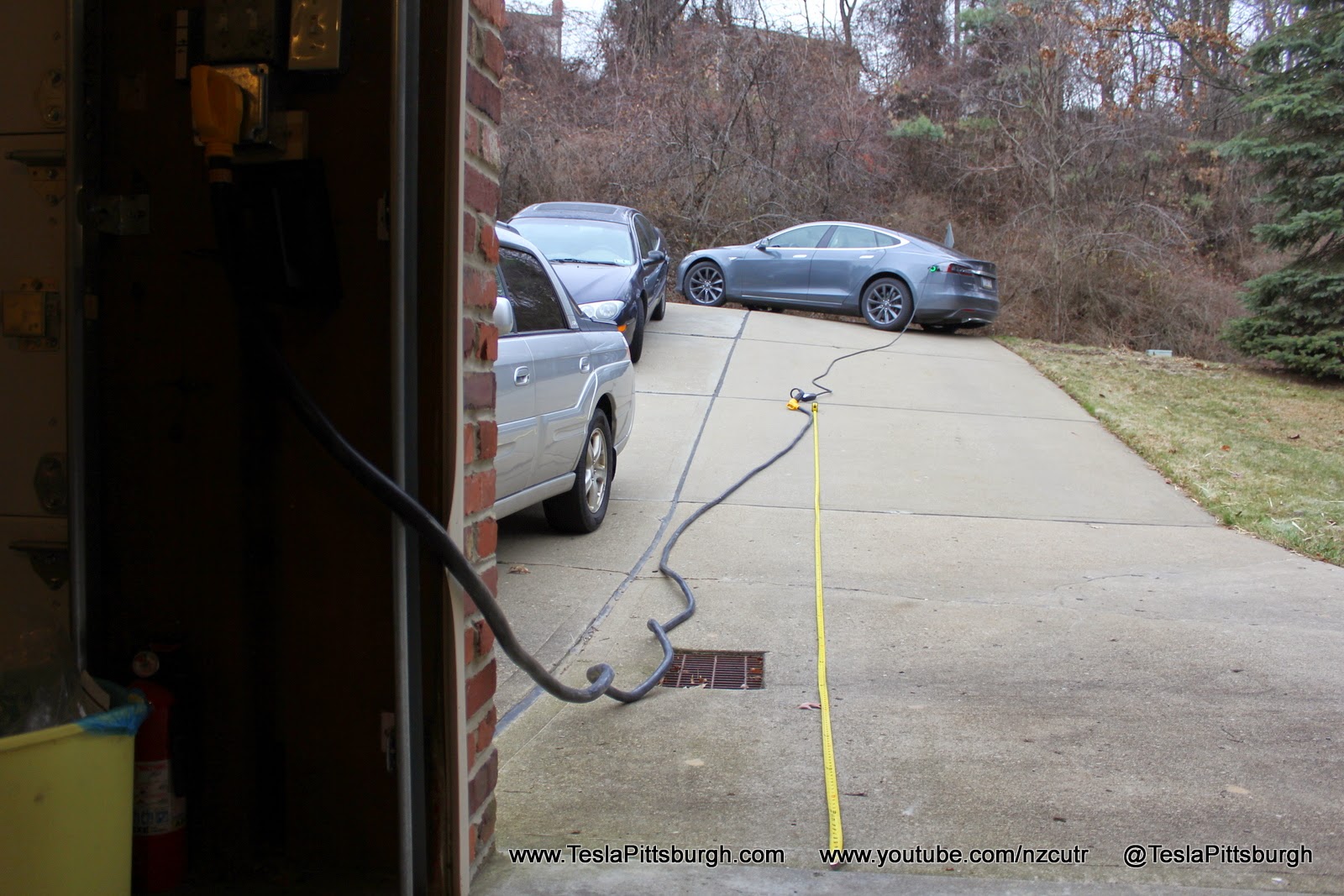 Putting a 25' tape measure down for scale, you can see that the cord really does live up to the 30' claim.  Add in the UMC (which is about 18') and a margin for safety-slackness and you're still counting a good 45' total length.  That's a large buffer that I can't imagine being insufficient for any destination/travel charging obstacles you might encounter.

Indeed, the only major downside is the possibility of repacking a cold cord.  Temperatures were in the 40s the day I tested this particular setup and even after a few minutes it was noticeably stiffening.  I predict jamming it back into a compact coil could require more than one helper as you both wrestle this "anacorda" snake back into its tie-strap.  Cord handling problems would also be true for any other cord, of course.  For more details on this product, watch my video review:

Summary:
When it comes to getting power where you need it, this is a high quality product that should last at least as long as the car.  It doesn't overheat and it doesn't disappoint.  A few ergonomic miscalculations are a small price to pay for a product that otherwise performs very well.