Oh Hail No! The Return of THE CURSE

Out with the old...  in with the ELECTRIC. 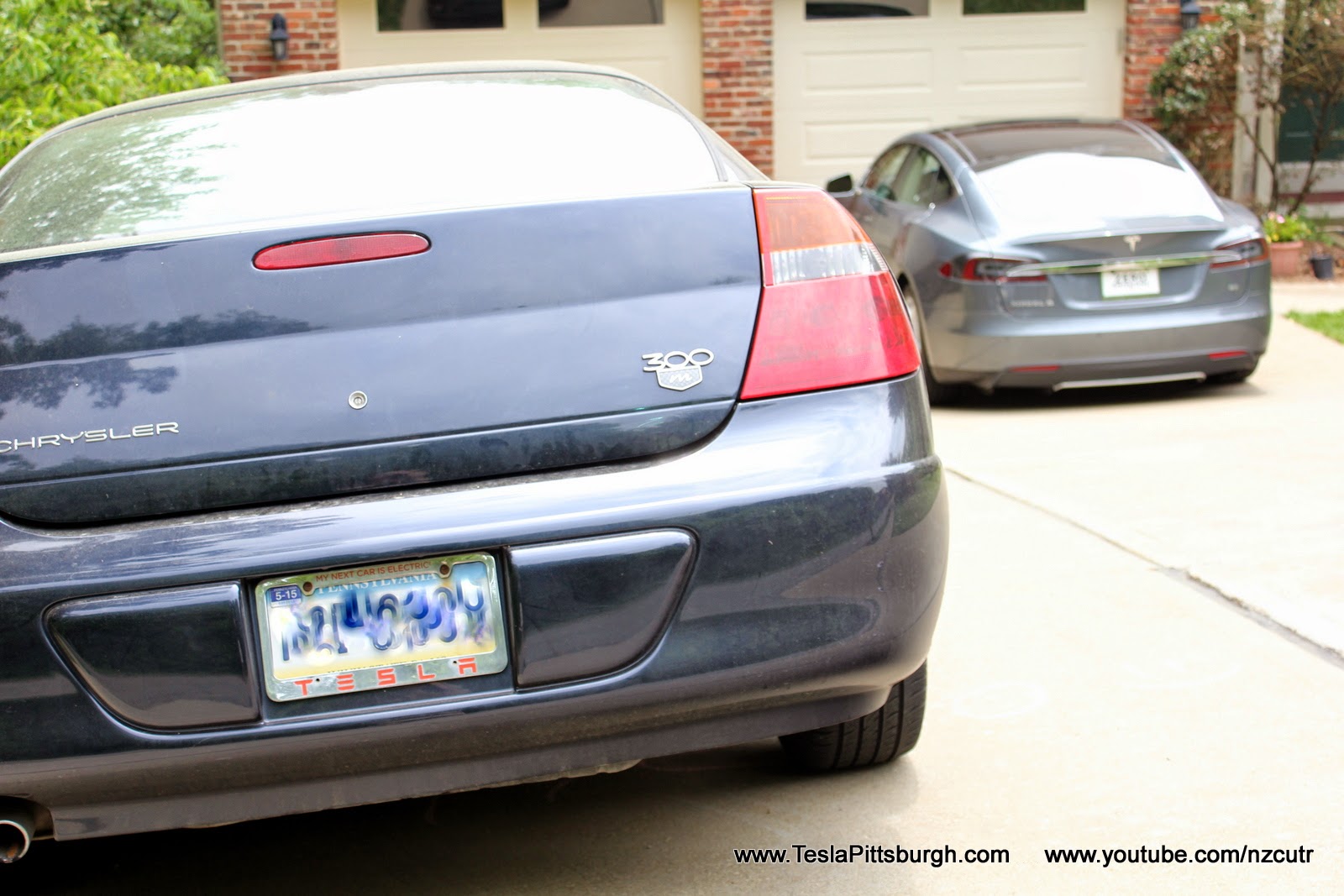 In the mega-manifesto-length-getting a Tesla series, I detailed the apparent curse that the Tesla license plate frame on the 300 came with (thanks again, Jake).  You can read about the curse by clicking here.  Well... I'd hoped that bringing an actual Tesla home would remove the curse.   But it may not have....
First of all, let's take a moment to note our attempt to break the curse.   A plate frame announcing our intention and, in the background, the fulfillment of that goal.  The cars actually have some similarities in their respective "mission statements" but could also not be more different in many ways.

While awaiting delivery of the Tesla, the 300 began to get cantankerous again and let it be known that it would not go mechanically silent in the face of the arriving threat to its position in the garage hierarchy.  Sure enough, the curse was not broken.  It needed a new hub and bearings... then promptly 2 weeks later it needed the other hub and bearings replaced (though it was satisfying to drop it off and whoosh away in the Tesla-- no more waiting!), each repair over $250.

A few days later I was sitting at work and overheard a weather forecast for HAIL.  Not just a light comically weird June graveling, but a freakish BASEBALL-SIZED hailstorm.  WHAT??   Are you kidding me?!  I have no idea how well the aluminum skin would hold up to an onslaught of comets in the parking lot but was pretty sure I would NOT be the last car warping into available garage bays at work!  I tracked down our resident weather expert and we checked his high tech forecasting gear... and determined it would miss our location by a few miles at least.  Whew!   That would have been a ridiculous story... decades from now.  It would have taken decades to find the humor.

Later, on a day where Serena stayed home safely in the garage (I had a doctor's appointment and their parking lot is tight, crowded, and full of older drivers in HUGE cars) my son decided he HAD to start packing for Scout Camp a mere 10 days away.  Such a burst of initiative should have registered at least blip on the NSA's radar and sent agents storming the house in search of an alien mind-control device.  Climbing down the attic stairs (which are in between the parking bays in the garage) he dropped a storage tote lid.

On the brand new car.

That I left home to protect.

Safe in its own garage.

Less than 12 hours before it went for paint protection film application.

Father's Day was going to be V E R Y  interesting this year...

Even worse, I find out by email.   Remember, I'm at WORK after my doctor's appointment and won't be home to even see the damage for another 3 hours.  THREE HOURS.  Can you picture the carnage I was anticipating?  How my imagination went wild?? 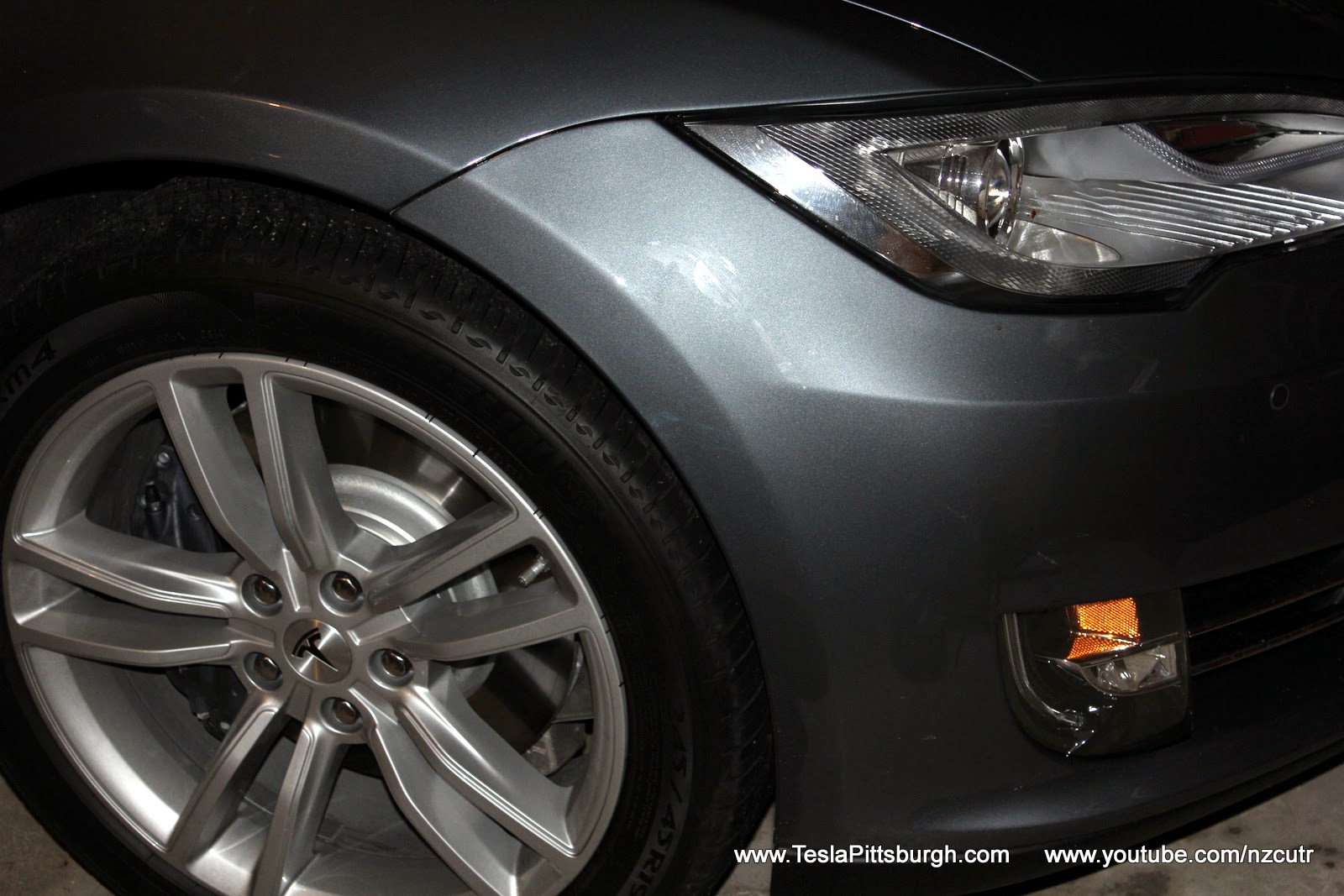 Fortunately, the scuff mark you see in the picture (between the headlight and the wheel arch) was-- apparently-- from the tote lid, not the paint itself.  Most of it came off with some gentle finger pressure.  When I dropped the car off for the paint film application, the detailer was confident he could polish off the remaining mark.   Just like the old saying--  "That'll buff right out!"
Whew!

Normally Serena is parked facing the opposite way-- which would have meant a blunt impact on the flat top of the rear hips (my favorite part of the car).   Or what if the tote had drifted a few inches farther over and hit the aluminum body panels?  Or the hood?!   AH!

That plate frame... I dunno.
Jury is still out.

Anyone know where I can find a volcano to throw it in?