Lady of the Night

If you were married to or dating an ugly person-- and who, in their right mind, would ever admit to that??-- I can imagine you'd try and optimize their appearance any way you could.  Certainly if you were planning a date night that included introducing him/her to your friends you'd try and lower the expectations in advance ("she's REALLY knowledgeable about the conflict in Crimea") and also pick a venue to play to their strengths ("you should see him BOWL, I mean, put him in a dark alley and MAGIC happens"). 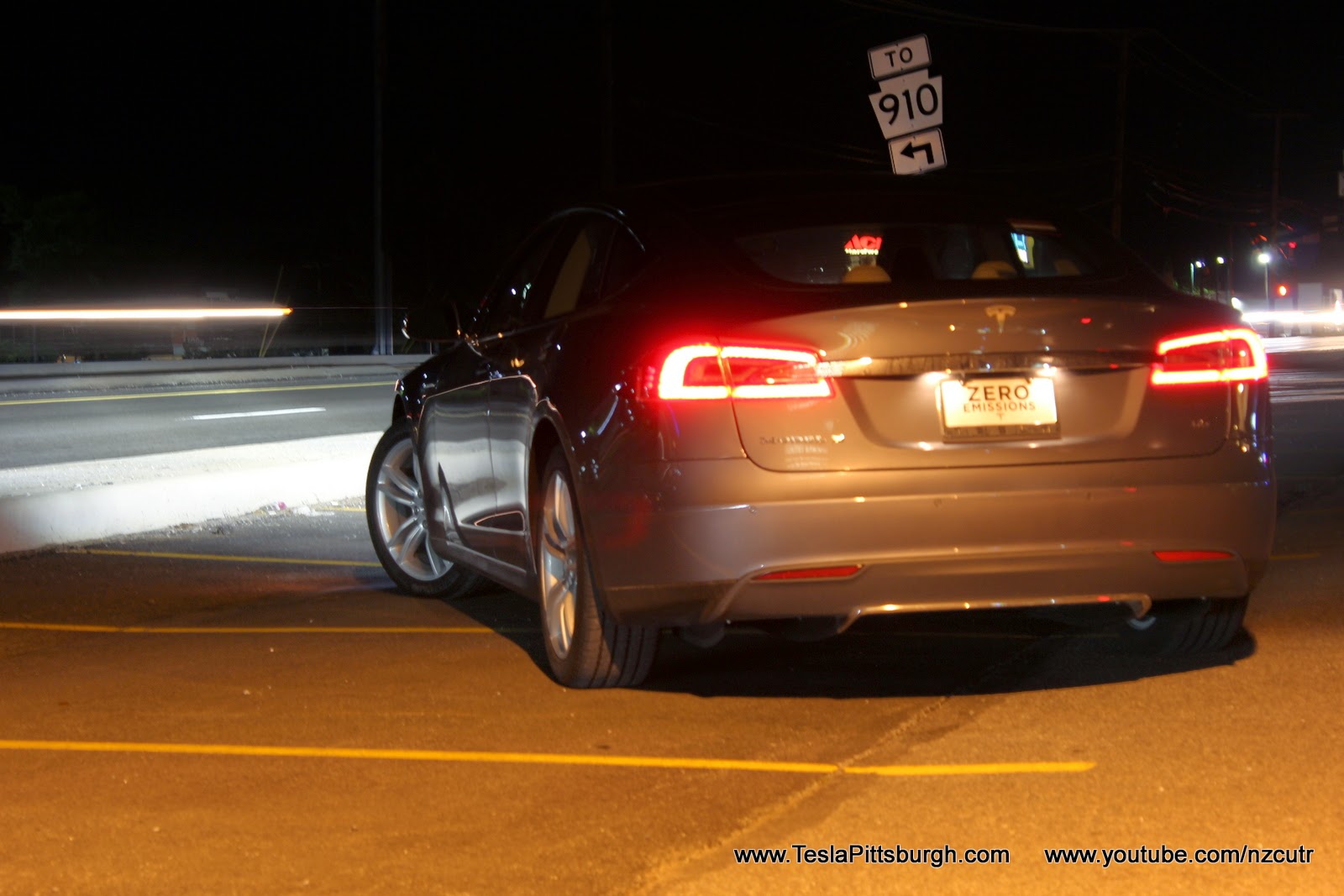 Fortunately for Model S owners, we don't have to hide our Teslas when daylight comes.  Nosiree.  This is a stunningly good-looking car.  Oh, she has brains, sophistication and a GREAT personality too-- but whoa, she's a looker too.  That doesn't mean you can't take her out in the dark though, check out m'lady after the sun goes down...
Firstly, those taillights.  Yes.   I don't even call them taillights they're so good looking.  Those are the AFTERBURNERS.   Like the Millenium Falcon blasting away from the Death Star. 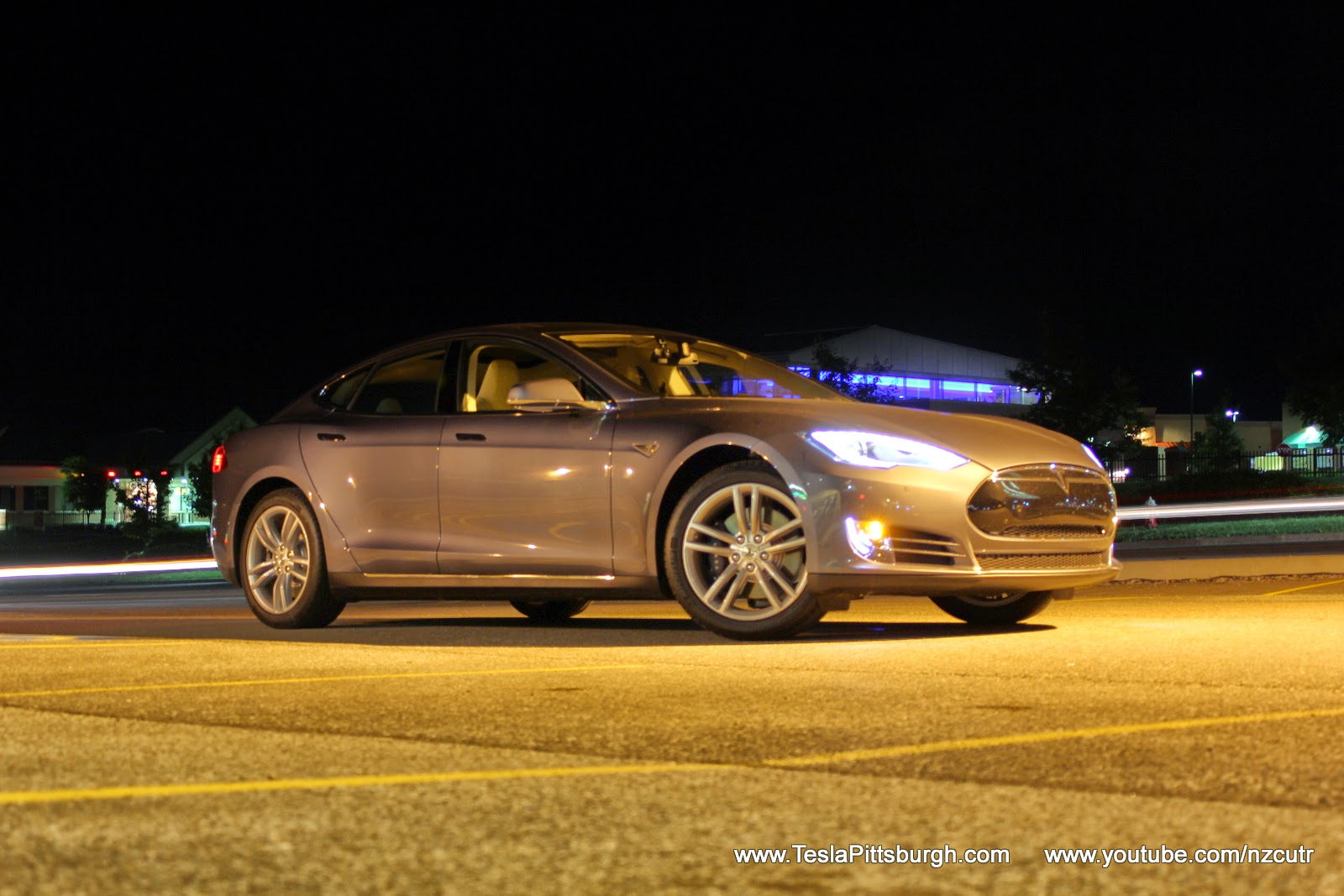 Serena doesn't have the fog lights but she does have the tech package.  Apparently in addition to turning lights (the ones at the ends of the lower grills' chrome fins) you get cool lighted tubes down there that come on with the headlights.  Not sure that do anything other than look futuristic.  Not sure anyone cares BECAUSE they look futuristic.  heh heh 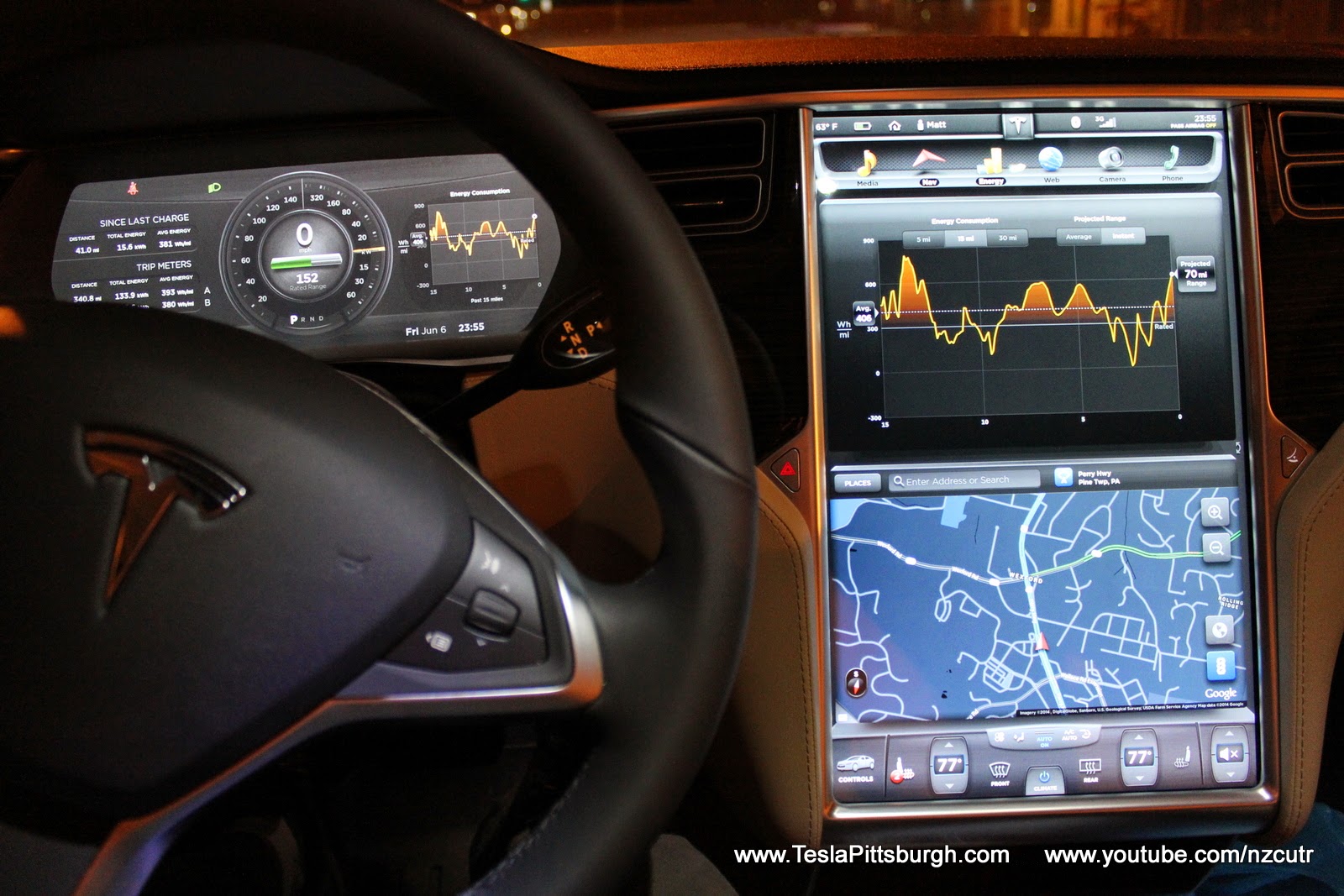 The main display toggles to a slightly more sinister look when in night mode.  I have read that some people run it in night mode all the time but personally I miss the Google Earth satellite photos on the navigation screen.  Hey, Google!  Here's an idea:  Take satellite pictures to the planet about an hour after sundown-- when it's dark but people are still roaming around.  For night mode, let me see where I am on a NIGHT photograph.  It'll sure make differentiating between a brightly lit mall parking lot and a brightly lit prison easier to do before I stumble into a grouchy guard working the overnight shift.  Not that that... has.. ever.. happened. 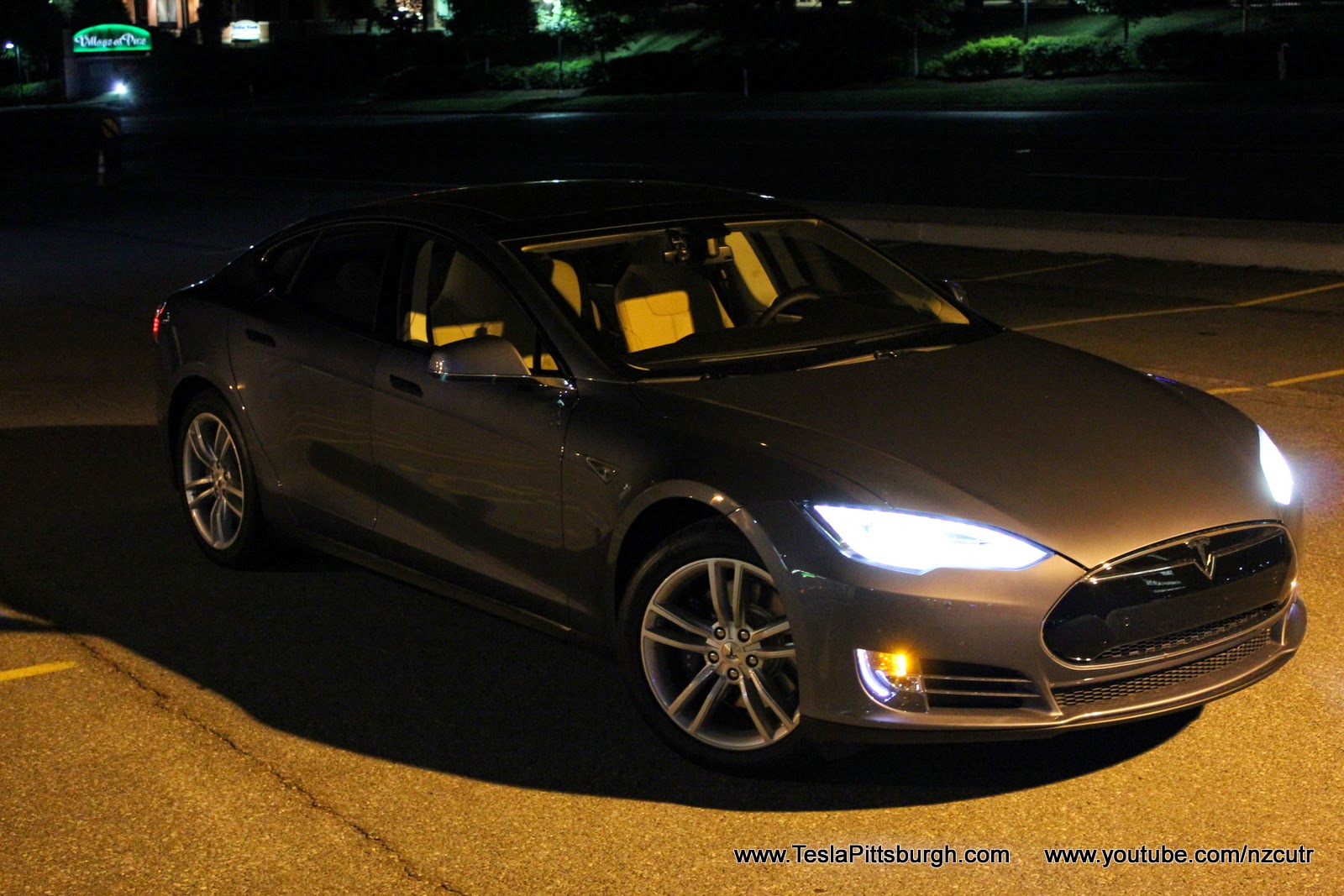 Another shot of those light tubes on the lower cluster.  They don't do any actual "lighting" of the roadway.  At best they would be good reading lights if you needed to refresh yourself on the jack points or how to change a tire.  Assuming, of course, you actually had a paper copy of the owner's manual.  Hint:  there isn't one. 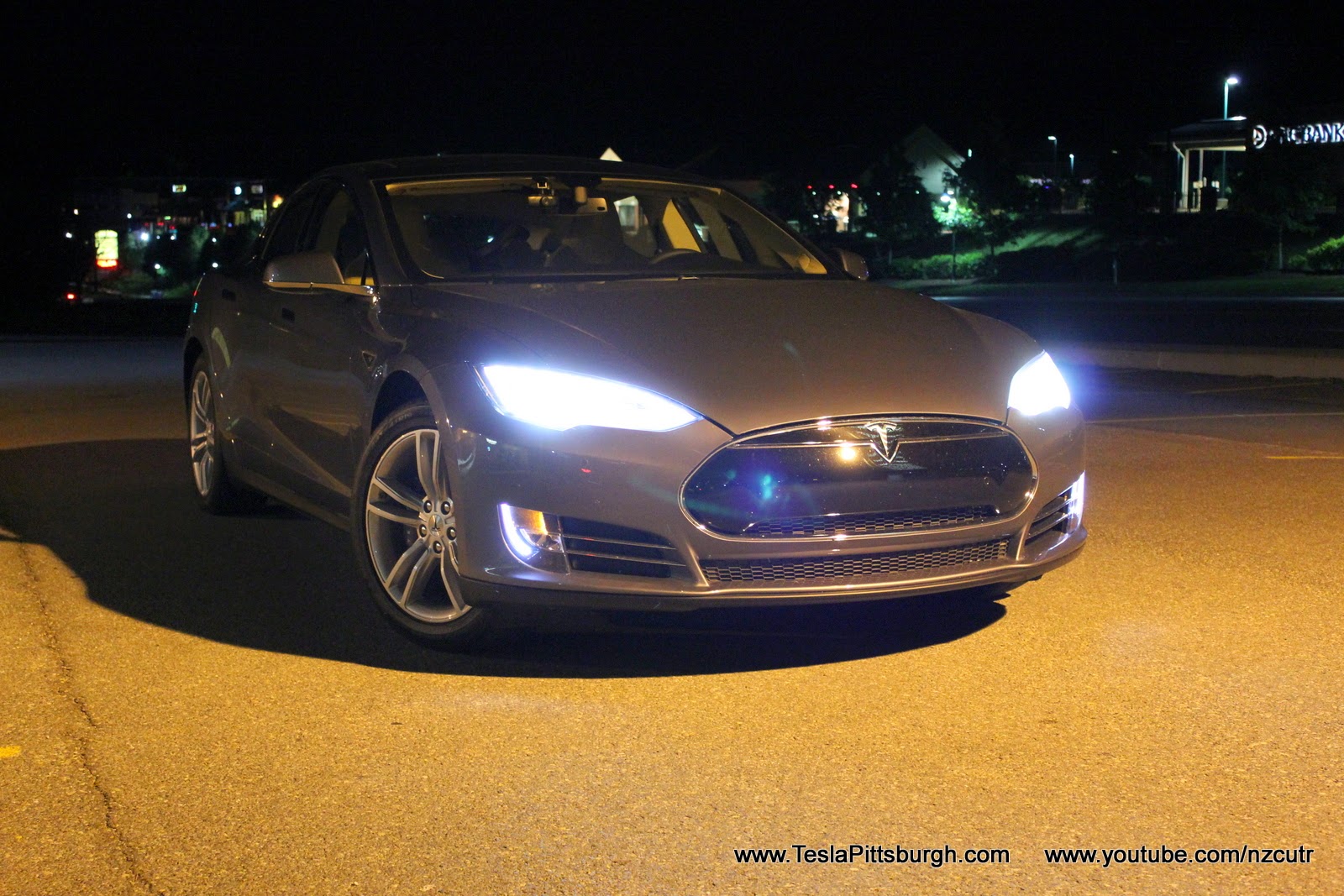 With just the DRLs on the Model S looks very cat-like.  At night, with the full headlights on the car looks more reptilian-- like a very dangerous snake.  It just needs a flicking tongue coming out of the black nose cone. 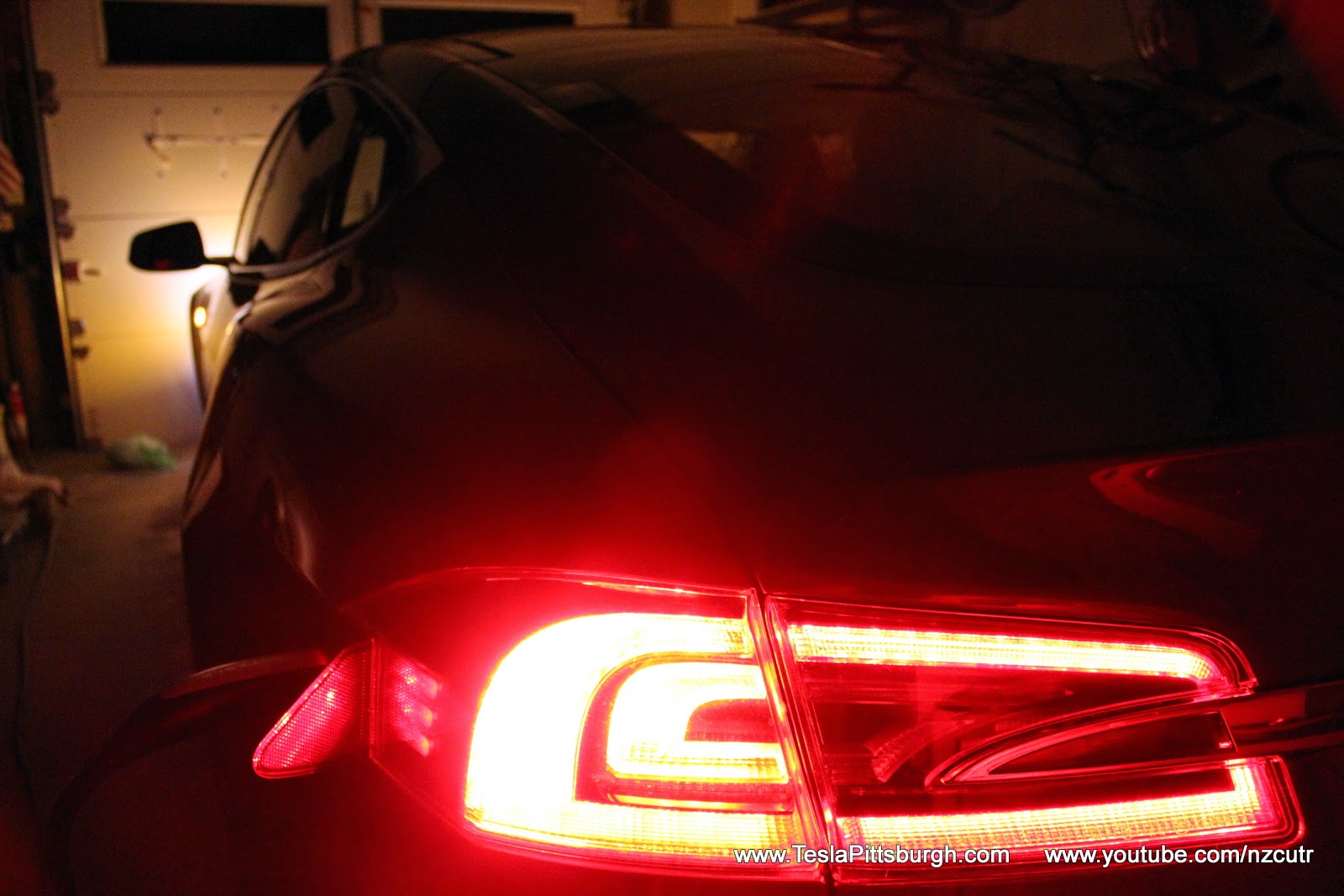 After a few pictures on the way home it was time to put Serena to bed.  She does need her beauty rest, after all, if she is to wake up refreshed and ready for the next day. 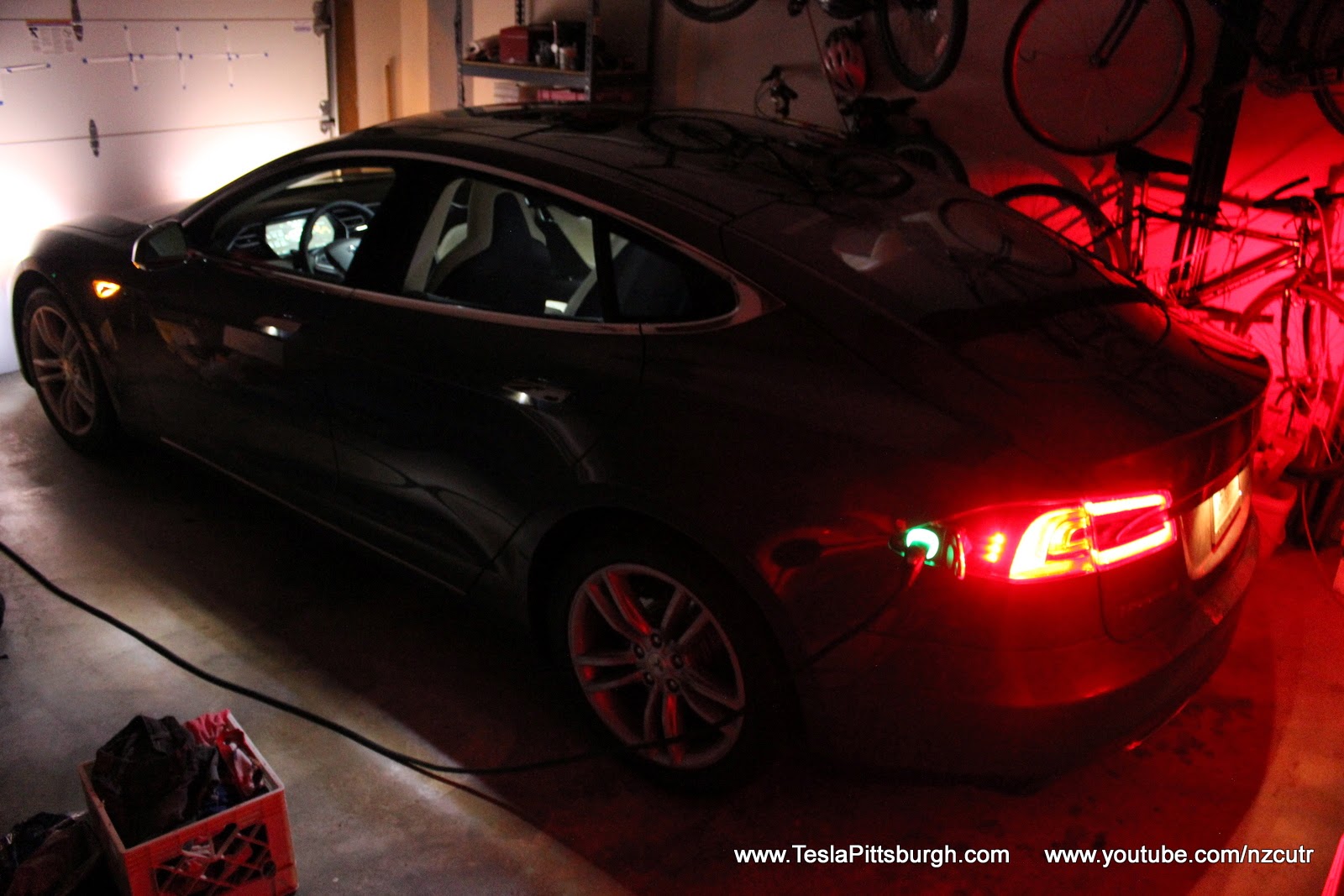 I tried to get a good picture of her all lit up in the garage but she kept going to sleep on me.  Either I'm a slow photographer or she has narcolepsy.  Finally I tricked her by leaving the far side door open and popping on the hazards/4-way flashers.  That also lit up the side marker light nicely-- though anyone driving by must have wondered what was going on inside that garage! 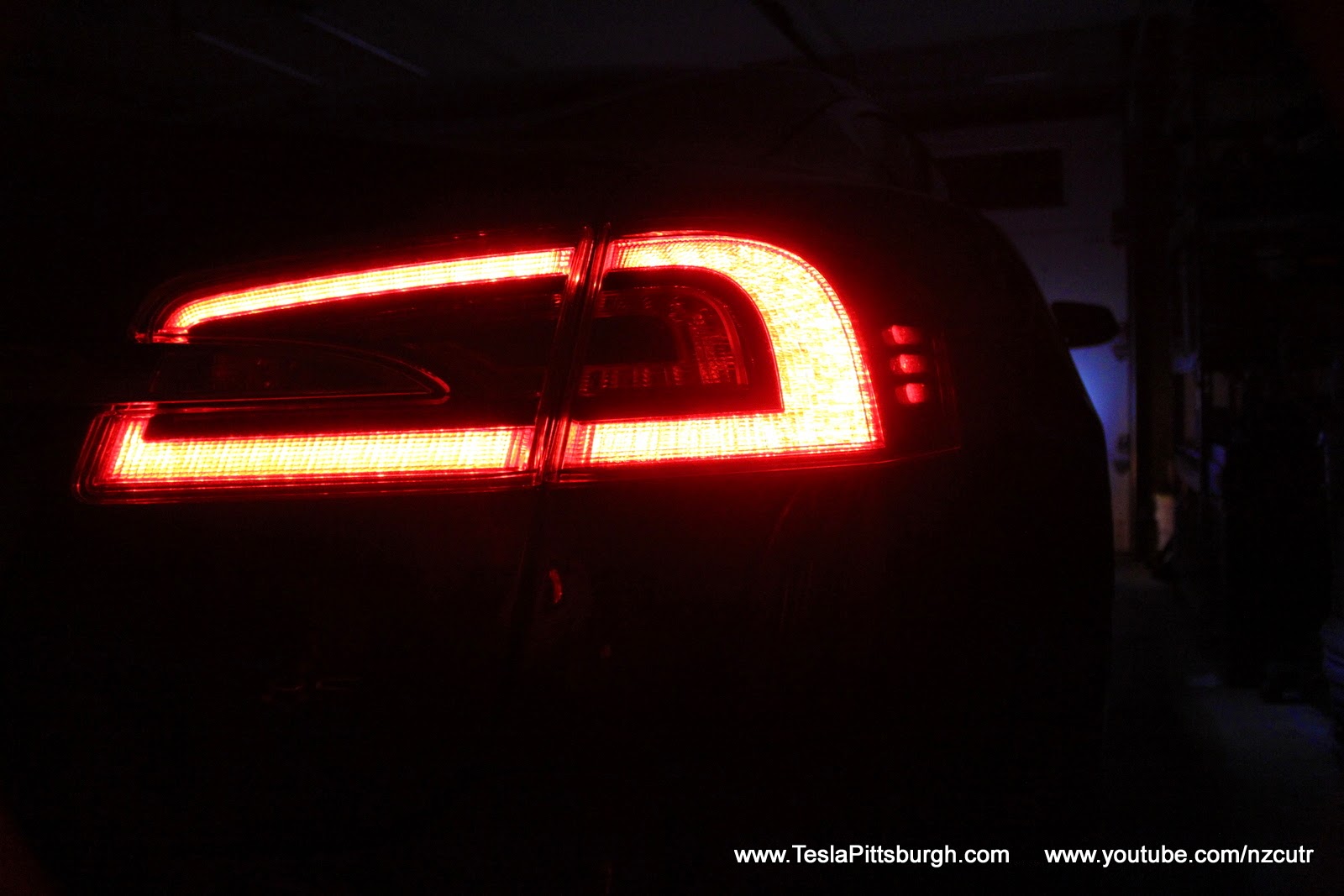 Closer study of the taillight assembly in "cruise mode".  Sadly the US spec cars don't get amber rear turn signals but other countries do.  That's quite annoying as I think it is a little less safe... a rare lapse for this car. 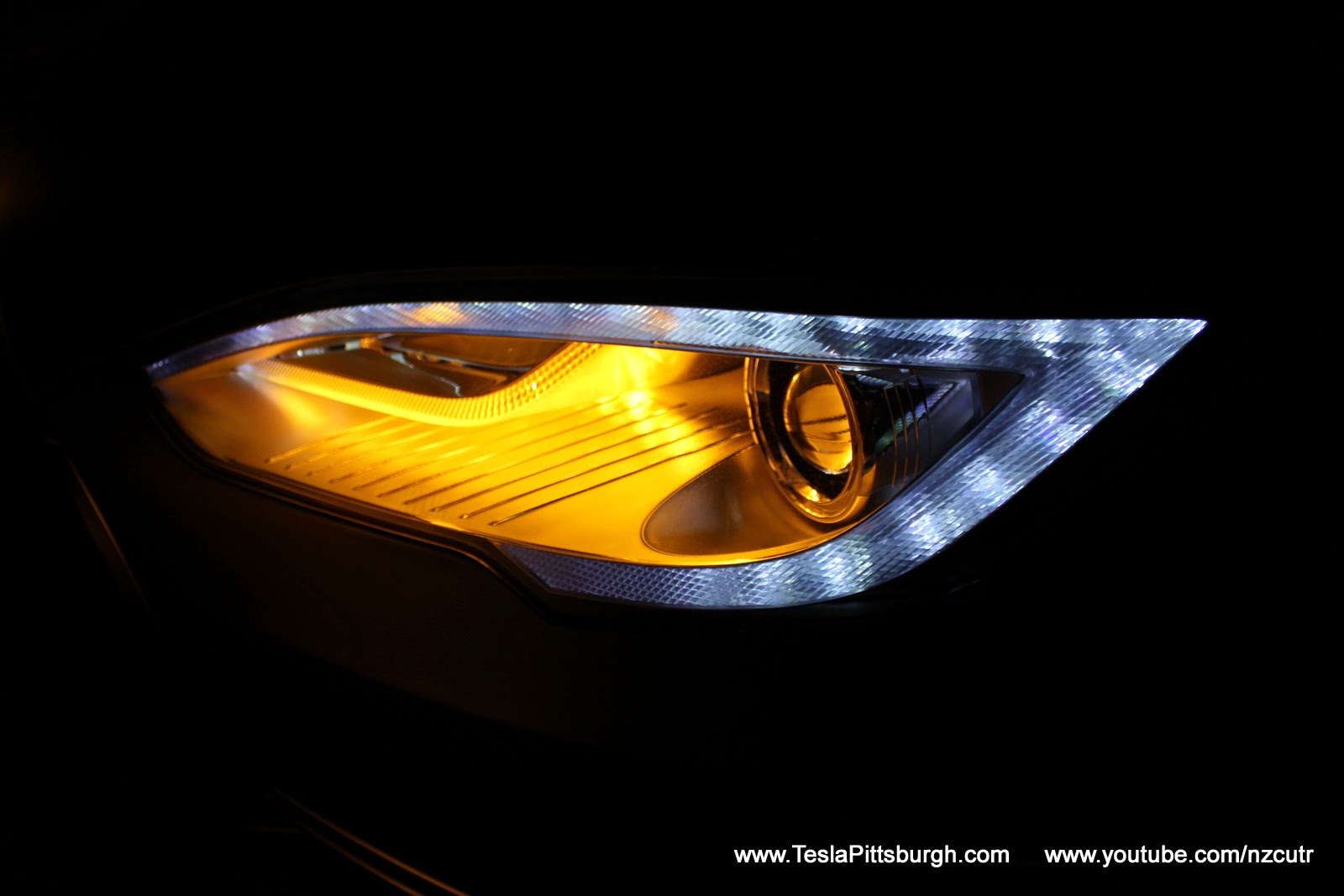 Here's the DRLs plus a flashing hazard light.  Weirdly, if you activate the turn signal the DRL on that side will alternately flash but with the hazards they appeared to stay on. 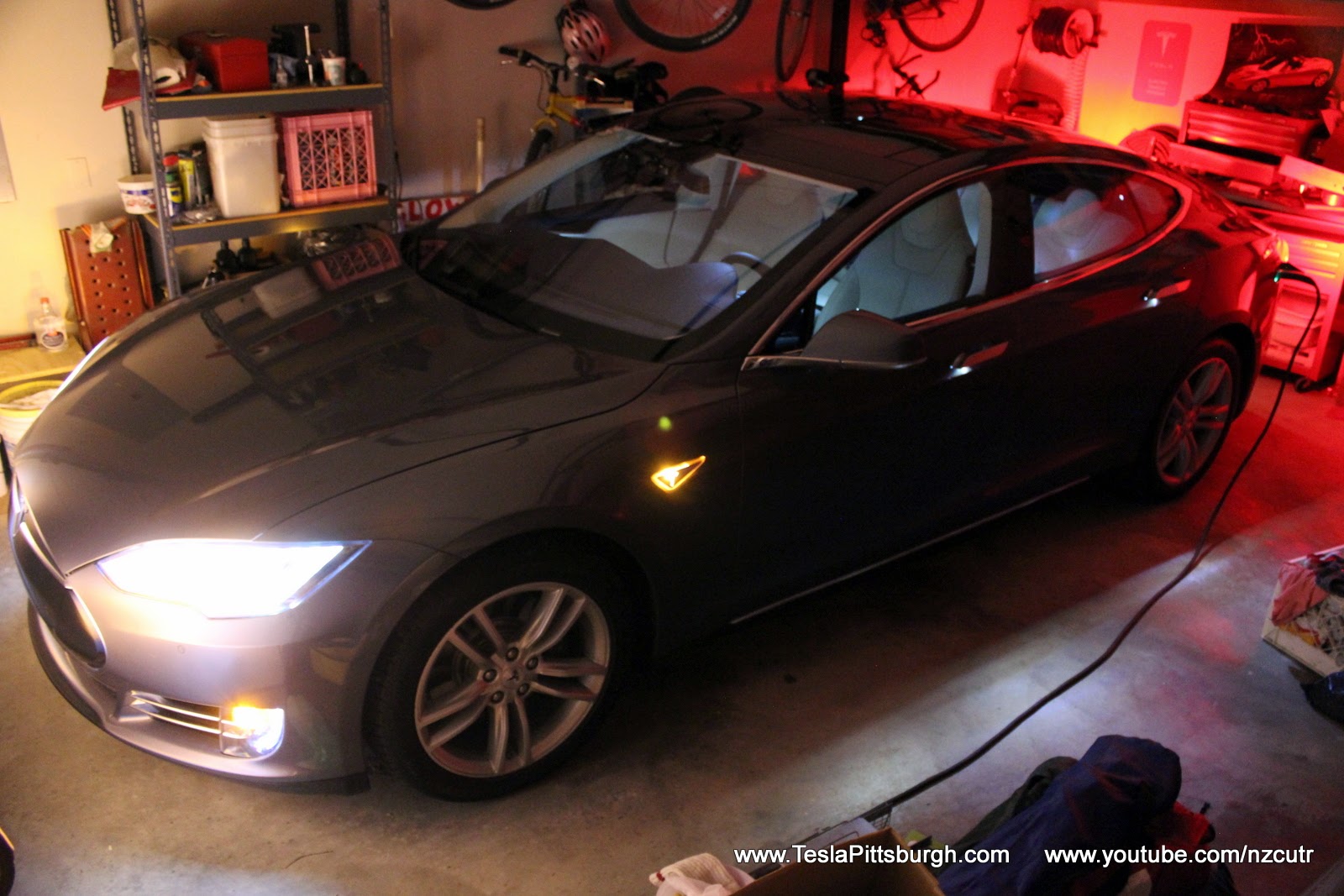 Front view of Serena all lit up, inside and out.   The pink crate on the shelf is where she keeps her make up. 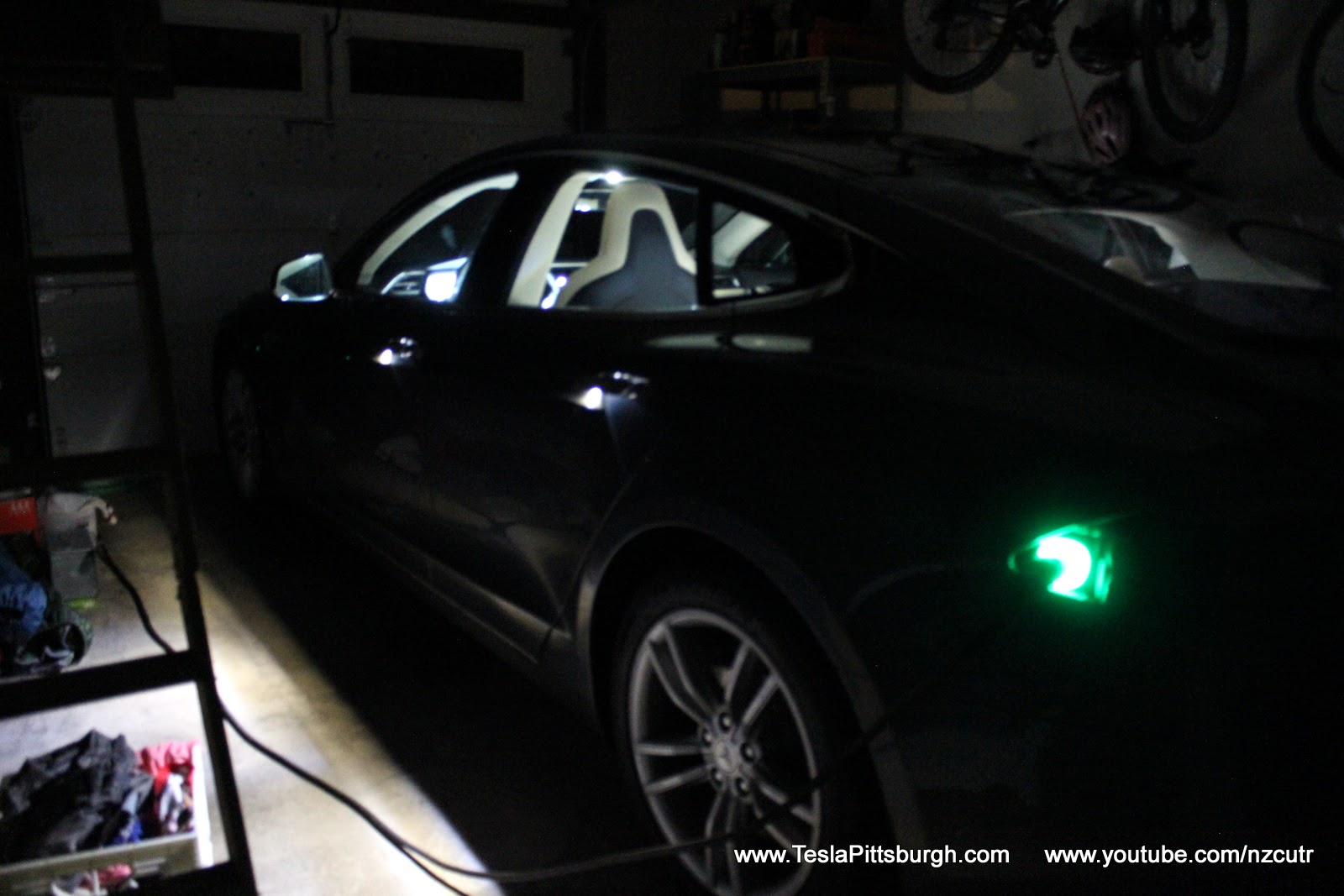 Charge port throbbing she still seems ready to go for one last ride around the block... sorry baby, I need to recharge too. 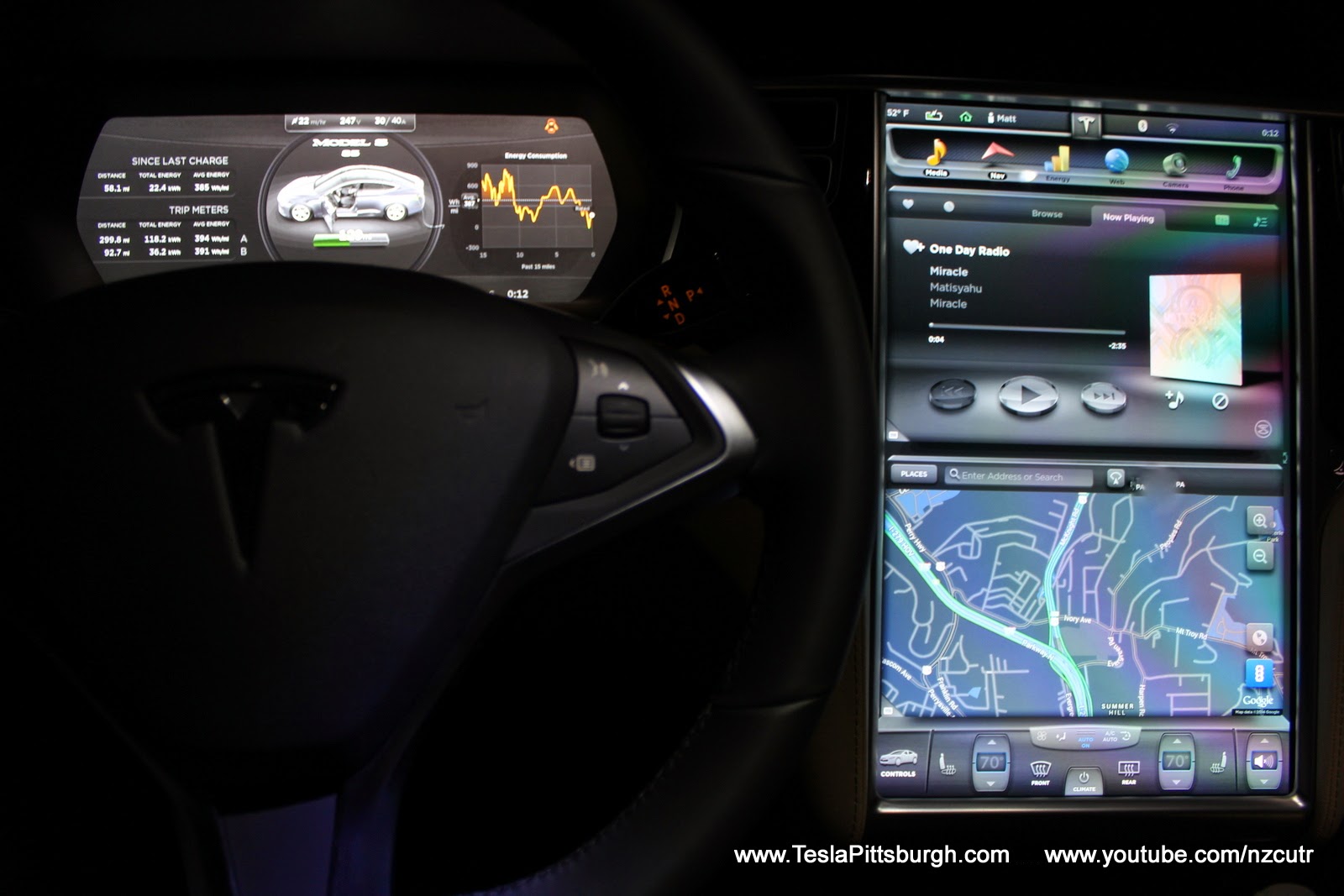 Matisyahu is a great musician to listen to when you're winding down for the night-- be forewarned though, sometimes the Model S voice recognition will bring him up as "mattress yahoo" or "modest yahoo". 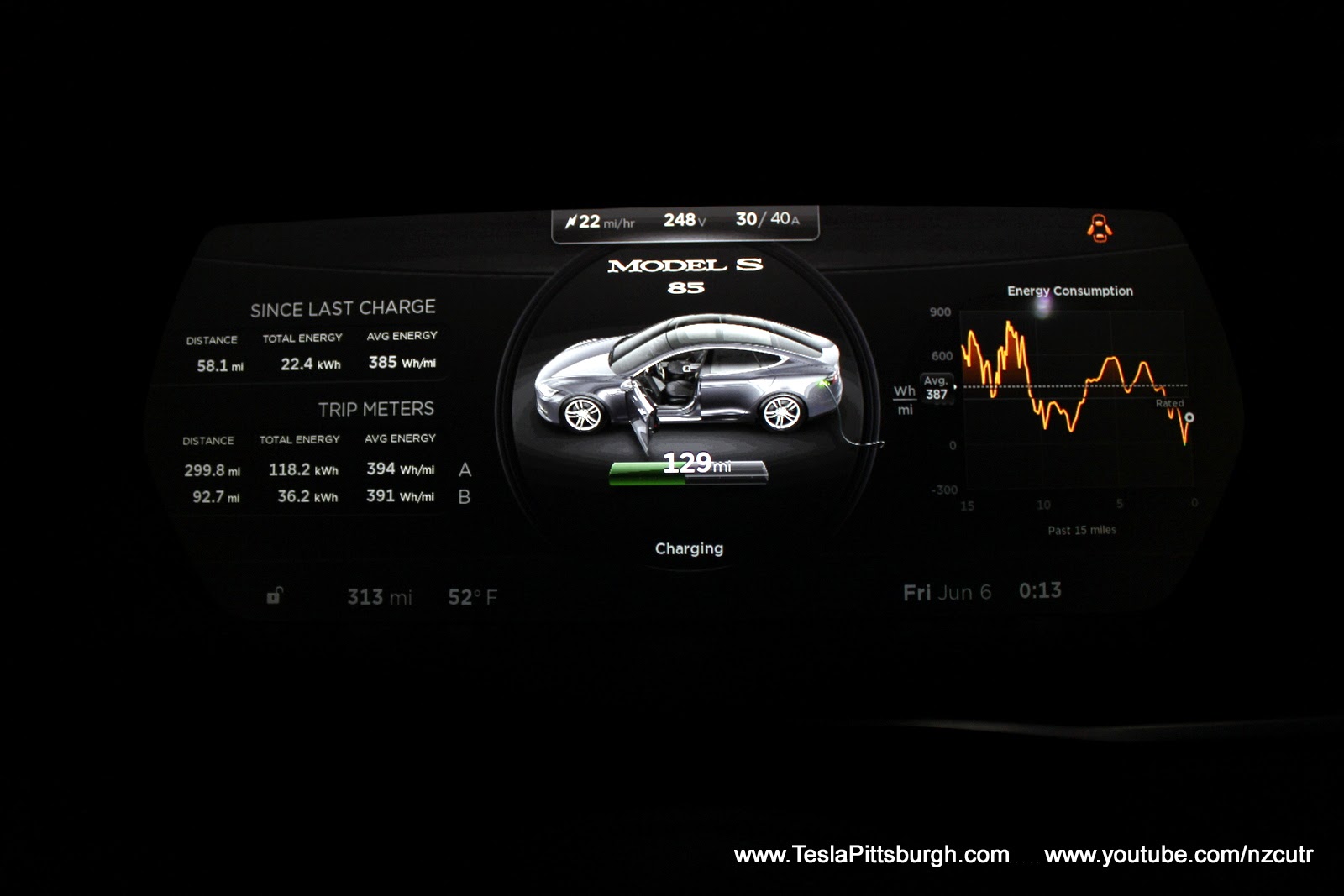 I installed a NEMA 50 standard plug in my garage.  It'll charge at 40 amps no problem but I've yet to NEED that fast a charge so I have it stepped down to a 30 amp draw just for a safety margin.  Even at that rate Serena gains 22 mph of range (176 miles over 8 hours) which is pa-lenty fast. 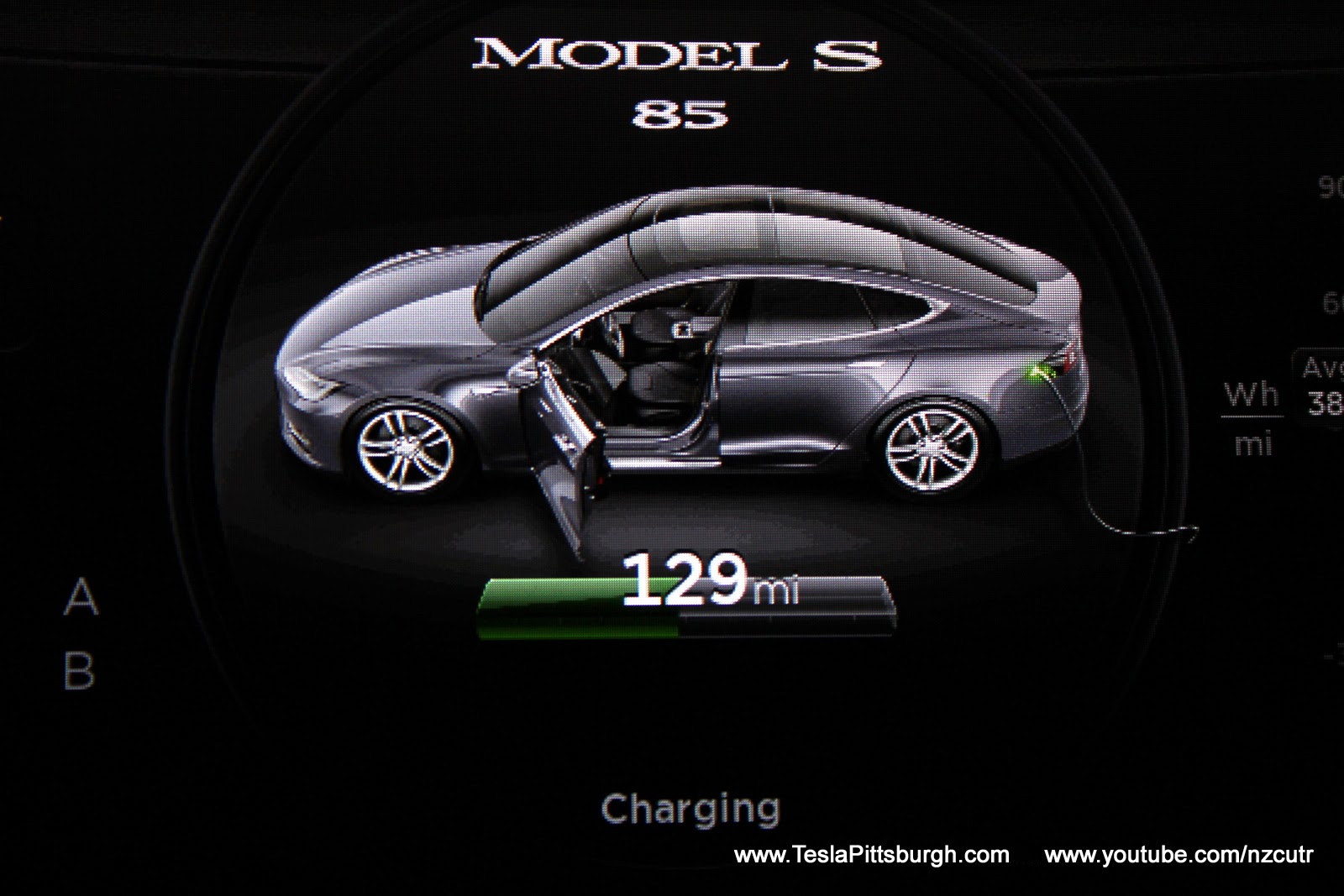 Two more observations-- even though the image of your car appears to be customized to your color and wheels, the interior is always black.  ALWAYS.  So it's only a partial illusion.   Secondly, Tesla recently allowed us to name our cars on their website and, it would seem to me, the display here above the car picture would be even more snazzy if we could have our car's name-- in the same font-- displayed here.  Talk about personalization!  C'mon Elon, whaddaya say?