Service Center Gets Its War Paint 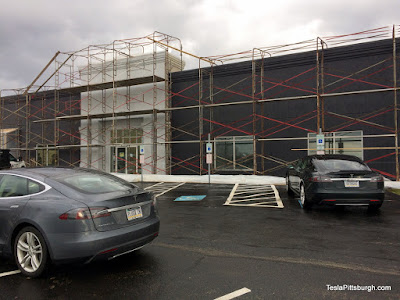 The newest front in the battle between gas and electric is about to open in Wexford, Pennsylvania.  The local dealership group continues playing in the dirt across the road as they lay the foundations of their new Maserati and Bentley dealerships next to their Volvo and Lexus ones.  Meanwhile, work continues on the Tesla Store / Service Center as the American company continues its expansion into the Pittsburgh market during what could become turbulent times for the auto industry-- especially for those expensive imports across the battlefield.


It's hard to ignore the myriad ways the Trump administration could affect Tesla.  When the oaths are all sworn later this week, it could be the opening salvo in an international trade war (or not) and there's still mixed messages coming from the Trump camp regarding corporate fuel mileage requirements, environmental regulations and clean energy subsidies. 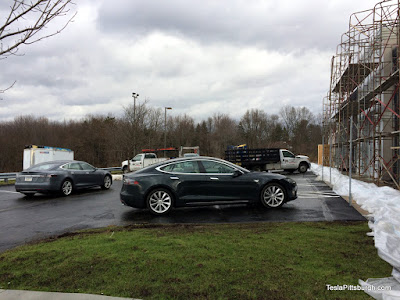 Adding to the confusion, Tesla is an American company that has heavily invested in new technology and manufacturing right here within our borders.  Those are aspects that seem to line up with Trump's vision for a return to the good old days of an America-first consumerism.

It's just too early to call which way this will shake out.  I'm hopeful that Tesla will be seen for the innovative and essential company that it is, with its hopeful vision for the future.  One thing's for certain, Tesla isn't taking their foot off the throttle just because there's a new occupant in the White House!

The ongoing work at the new Pittsburgh Store / Service Center is a testament to Tesla's expansion and job creating machinery.  Staff is being hired and (rumor is) making their way to the factory mothership in Fremont, California for training. 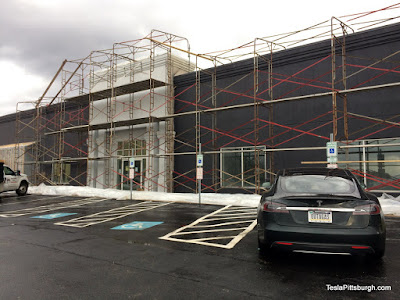 The building itself is coming along nicely as Jake and I made a quick stop to see the progress.  The exterior is mostly finished, with the original columns now removed and new stucco applied to the flattened facade.  The paint work appears to be largely complete, though if you look at the side of the protruding section here, you can see it hasn't been repainted yet.

There is no signage on the building anywhere, though it will eventually be back lit on the lighter parts of the facade.  We also noted a few areas where the wrought-iron colored paint looked a little thin and the previous Ethan Allen awnings were still ghosting through. 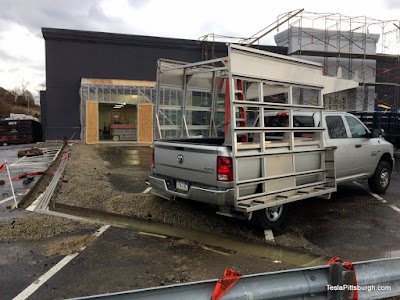 Tesla HPWCs will be installed in the front parking lot of the store.  This appears to be a change from earlier plans that indicated they'd be more behind the store in the large central lot-- but that could have been a misunderstanding.  There appear to be at least four of these chargers being installed in the front lot, based on the amount of conduit visible inside the open trench.  The garage door opening where the trench originates will be the service entrance. 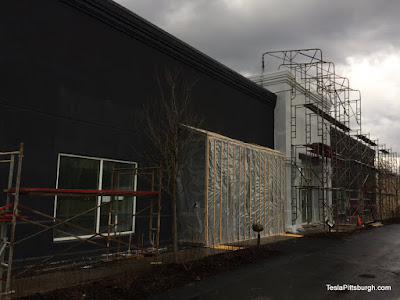 The side of the building, which actually faces Route 19 because of the unusual layout of the property, is similarly lacking a garage door.  In fact, of the three exterior garage doors being installed there are still currently zero on site that we could find-- and certainly none in place yet.  The opening for the garage door framed out here will become the customer delivery area.  It will be a laterally-folding door with room for two cars to roll out into their new owners' hands. 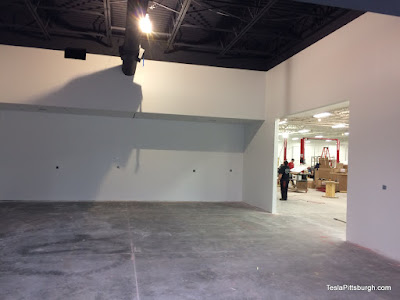 Peeking through the customer delivery door opening, you can see the space is mostly finished.  The 50 amp plugs for the UMCs don't appear to be in place yet, but the boxes are visible.  If the color scheme here follows other delivery spaces, the alcove portion will end up a bright Tesla red paint with signage and have desk areas for final paperwork and signatures.  Another internal door will later be installed on the right to separate the delivery area from the service area beyond. 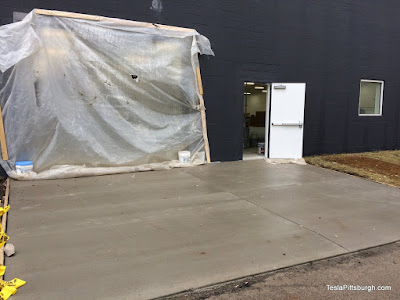 The exterior garage door for the service area on the alley side of the building is still missing too, but they've gone ahead and paved the driveway ramp that leads out of the building.  Since the side door was open, we decided it was an open invitation for a little Pittsburgh-style "nebbing." 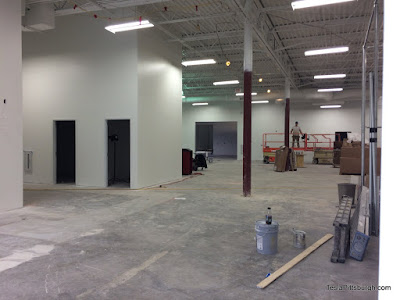 Looking through the door to the left (towards Route 19) you can see the opening into the customer delivery area in the middle of the background.  The two doorways on the left are somewhat of a mystery.  The original blueprints indicated only one door that led to an employee lounge/lunchroom.  I'm guessing that is still the purpose of the left door and perhaps an additional bathroom or janitorial closet has been added behind the right door. 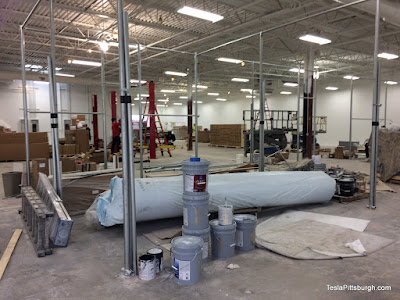 Moving our gaze the right side of the building, we are looking straight through the service bays and offices.  The poles in the foreground are likely part of a chain-link cage where valuable spare parts will be stored.  Beyond them you can see the bright red car service lifts being attached to the floor and assembled.  Crews were working on the second of these during our visit.  If you follow the long back wall of the service area you can see the daylight coming in where the service entrance door will go.  Much of the open space between there and the lifts will be framed out for a customer lounge and service writers' desks.


Full plans and details from when the design was first presented to the local zoning/planning commission can be found in my earlier post. 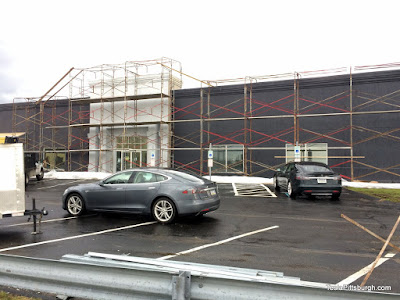 The last we heard, February would be the Grand Opening month of the Pittsburgh Service Center.  Based on the progress and the pace of work since my last stopover, I'd say they're very likely to make that deadline.  It will be somewhat surreal to-- after all this time "in the wilderness"-- to have a home for Tesla just down the road from my house.

I can't wait to welcome them to the neighborhood!