Tempting the Revival of "The Curse"

A long-running joke and "Tesla Lore" among our household and my friend Jake is: THE CURSE.  You can read all about it on this old blog post, but basically it all started when I was "sold" on getting a Tesla Model S.  We were still months (maybe years?) from actually ordering one, but Jake wanted to help cement the notion so he passed down a nice Tesla license plate frame that had adorned the car he owned prior to taking delivery of his Tesla. 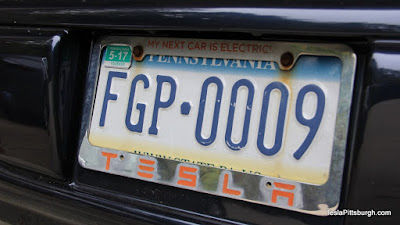 What happened after that license plate frame was installed was nothing short of calamity after calamity.  The Chrysler seemed to rebel against the notion of being replaced and threw mechanical temper tantrums and then finally got smashed into by another car--- or was it an ACCOMPLICE?  So we joked that the frame was cursed...  and here we go again, OH I HOPE NOT.

I made a little video explaining the installation-- but let's be honest, putting a license plate frame on is not a complicated task... so the video is more you admiring my narration skills.  But I digress...
The plate frame came with my copy of "Getting Ready for Model 3" by Roger Pressman.  I wrote a rather extensive review-- which my wife referred to as my "book report"-- which you can read here on my blog.  In short, you should get the book if you're new to Tesla and particularly if the Model 3 will be your first electric car. 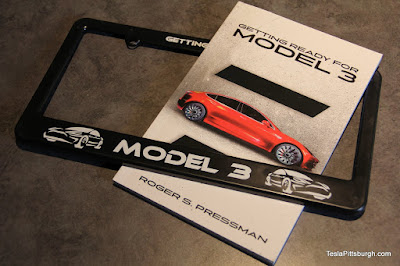 The plate frame features the front 3/4 perspective of the prototype Model 3.  Whether this actually ends up truly representing the face of the Model 3 remains to be seen.  One notable gripe, if I'm picky, is that the plate frame says "Model 3" instead of "Model ≡" as Tesla has referred to it ever since Ford took the "E" out of SEX. 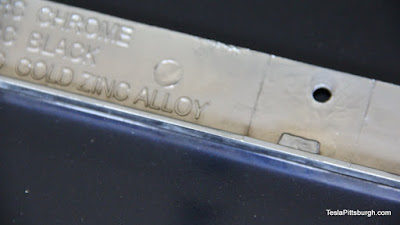 The Tesla frame was made out of a zinc alloy and was pretty heavy and quite sturdy.  Though the finish was tarnishing a bit, it does clean up with some scrubbing.  In the picture above you can also see there are little tabs on the bottom of the frame to hold the lower edge of the license plate.  These keep the whole assembly from rattling when the trunk lid is slammed. 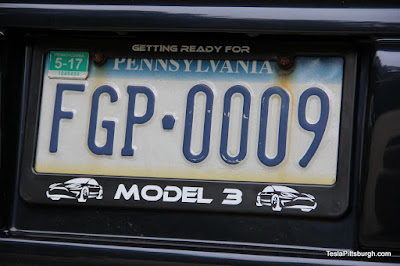 The Model 3 license plate frame is made of a rather typical plastic.  I'm a little concerned about it weakening in the UV light, as I'm unsure of the type of plastic it is... but it's an inexpensive and (hopefully) short-lived purchase.  The frame is also missing the tabs on the bottom edge to hold the license plate securely, so I decided to put some heavy duty exterior tape on the back of it to keep everything tied together. 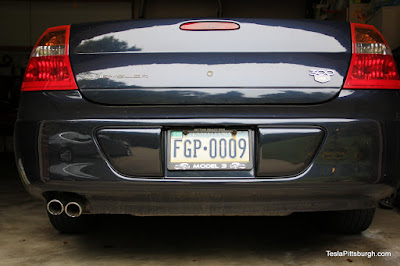 With the new plate frame installed about 2 months ago, the Chrysler has thus far cooperated.  I think perhaps it has realized that the Tesla was not a replacement, just a demotion.  The 300 has actually had few problems since The Curse era, but now that my teenage son is driving we will have to address some of the 300's quirks.  An experienced driver can compensate for some quirkiness, but a new driver doesn't need the distractions.

Also, he doesn't fit in the Chrysler very well at the moment.

While my son isn't dramatically taller than me, he's tall enough that the driver's seat in the Chrysler will have to be fixed.  The height adjustment for the back half of the lower seat cushion failed long ago.  It didn't matter to my wife and I because we're basically the same size, but my son found that he's squished and ducking his head down to see out the windshield.  Not good.

The adjustment motor actually runs, but either the screw assembly is jammed or the gears are stripped.  We'll tackle that repair as soon as we can run out to the pick-a-part salvage yard and get ourselves a new motor (or an entire seat frame).  If that doesn't work, we'll cannibalize the motor from the passenger seat.  Either way, it'll necessitate taking the Chrysler out of the rotation for a weekend (or more) and finding the time to do that is tough as I'm still sorting out some electrical problems in my Subaru.  The Subaru is also caught up in the Takata airbag recalls, ARG!

Regardless, the 300 will soldier on like Rasputin until the Model 3 replaces it as my wife's daily driver (or a CPO Model S if we're not happy with something about the final design of the 3).  The Chrysler will then become the college car for the rest of its days.

Hopefully it will be viewed as a blessing and not a curse, but kids these days... who knows!