EVannex ASLK Review: A Surprising Value... If You're Into That Sort of Thing

Christmas has been getting harder and harder every year-- not for the kids, but for the adults.  We're all capable and impatient enough to buy whatever we want, when we want it.  So what do you get people who don't leave anything on their wish list uncrossed off?  For years it seemed we would panic buy various gift detritus like we're on some kind of timed shopping game show-- just so we have something to wrap and put under the tree-- annoyed for the trouble of getting it there. 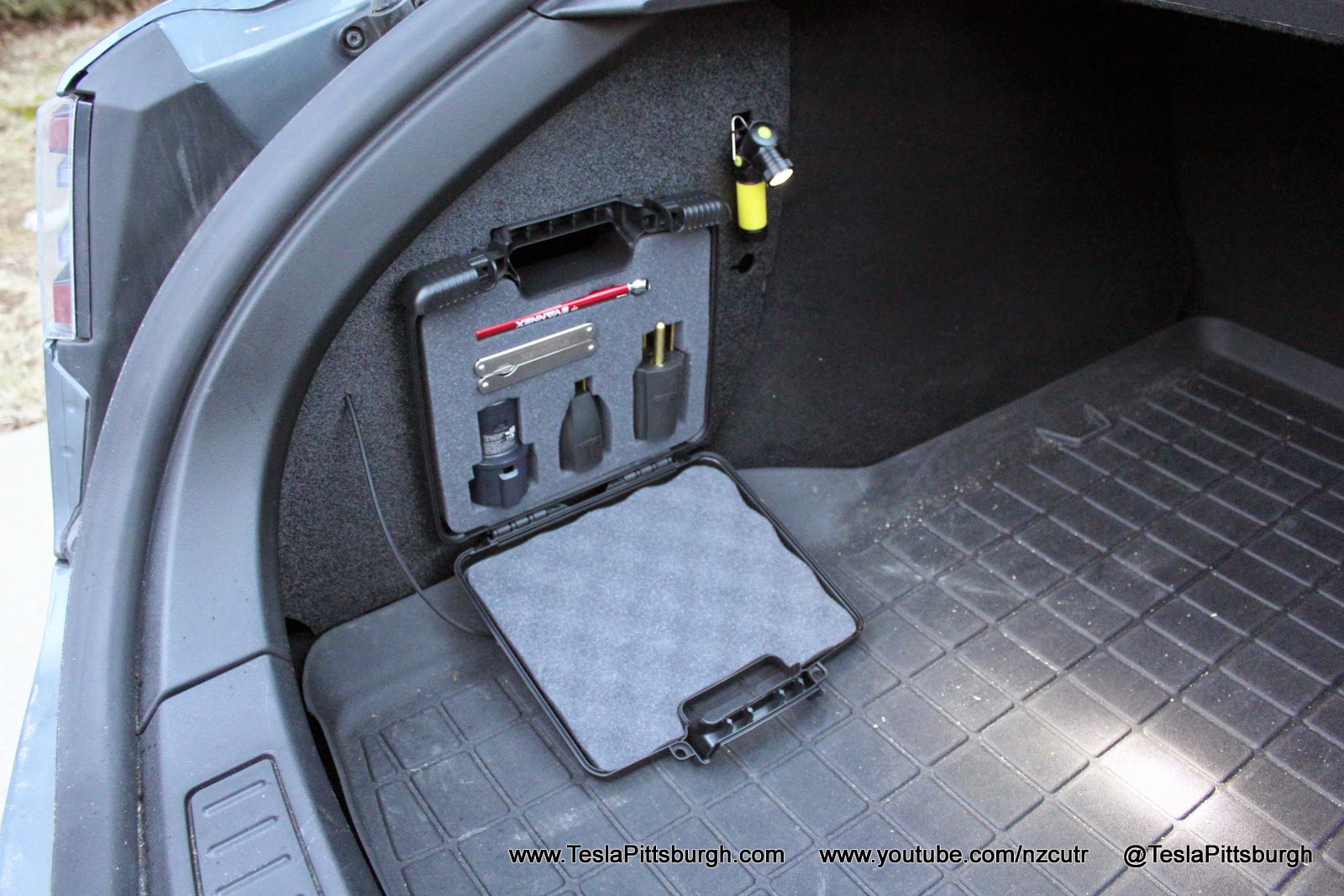 I think EVannex has found themselves with the same problem.
Most of their offerings (like their downright superb CCI-- which is leaps and bounds better than Tesla's own) are innovative and class leading designs of quality that laid a foundation worthy of building a company on.  I've written this review twice because I was so conflicted about the product.  In the end, I think it is a viable offering and my high expectations were perhaps unreasonable at this price point.  Moreover, its best selling point has been overlooked by EVannex... and I'm going to show it to you.  However, there is no escaping the whiff of desperation.  It's Christmas Eve and they're still shopping and hoping for a miracle find. 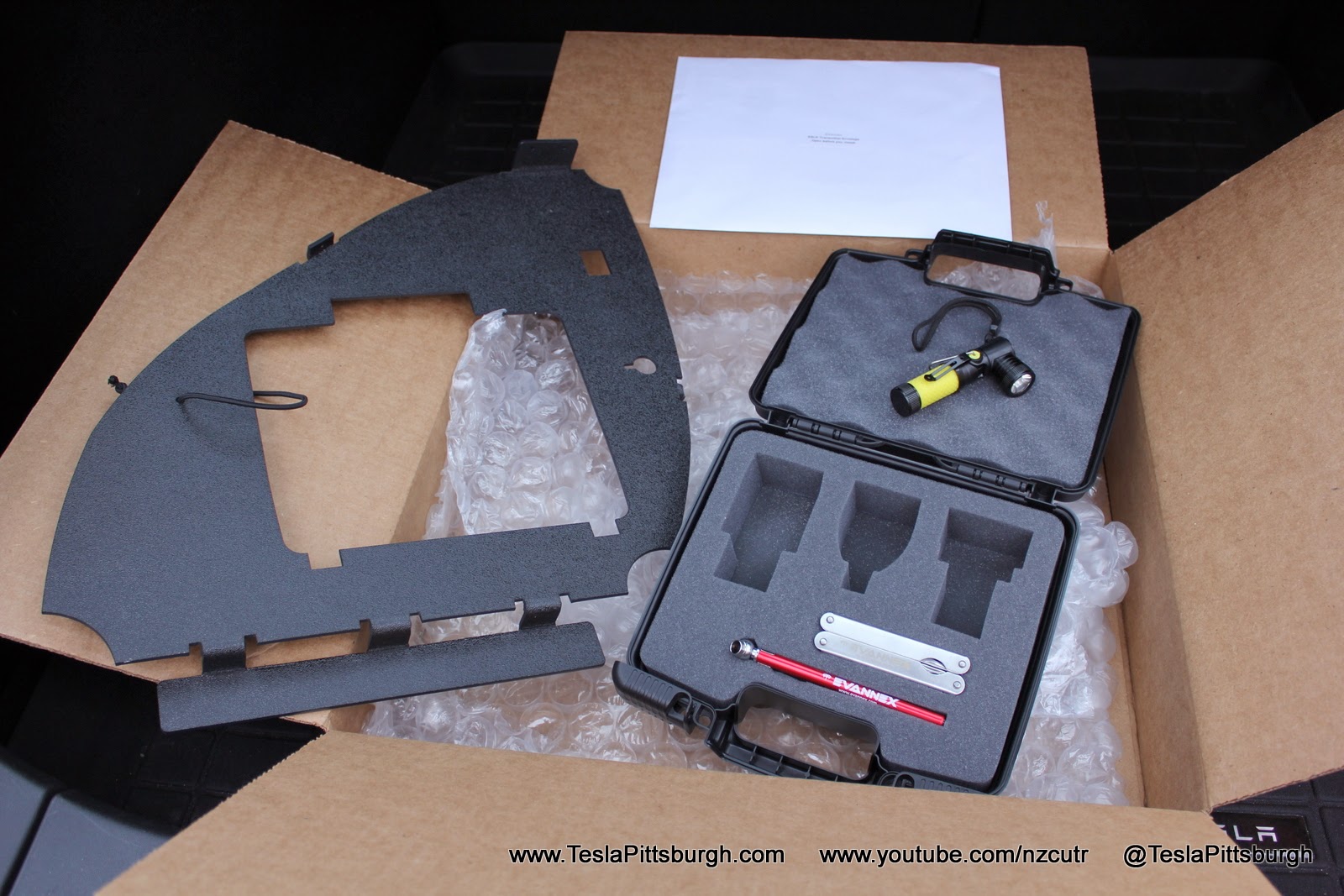 The Adaptable Storage and Lighting Kit (ASLK) is a collection of pieces assembled to address a perceived problem: storing the charging adapters and lighting a very dark trunk.  To solve this the ASLK uses a false trim panel to mount a plastic case and flashlight.  Filling out the case are some accessory tools. 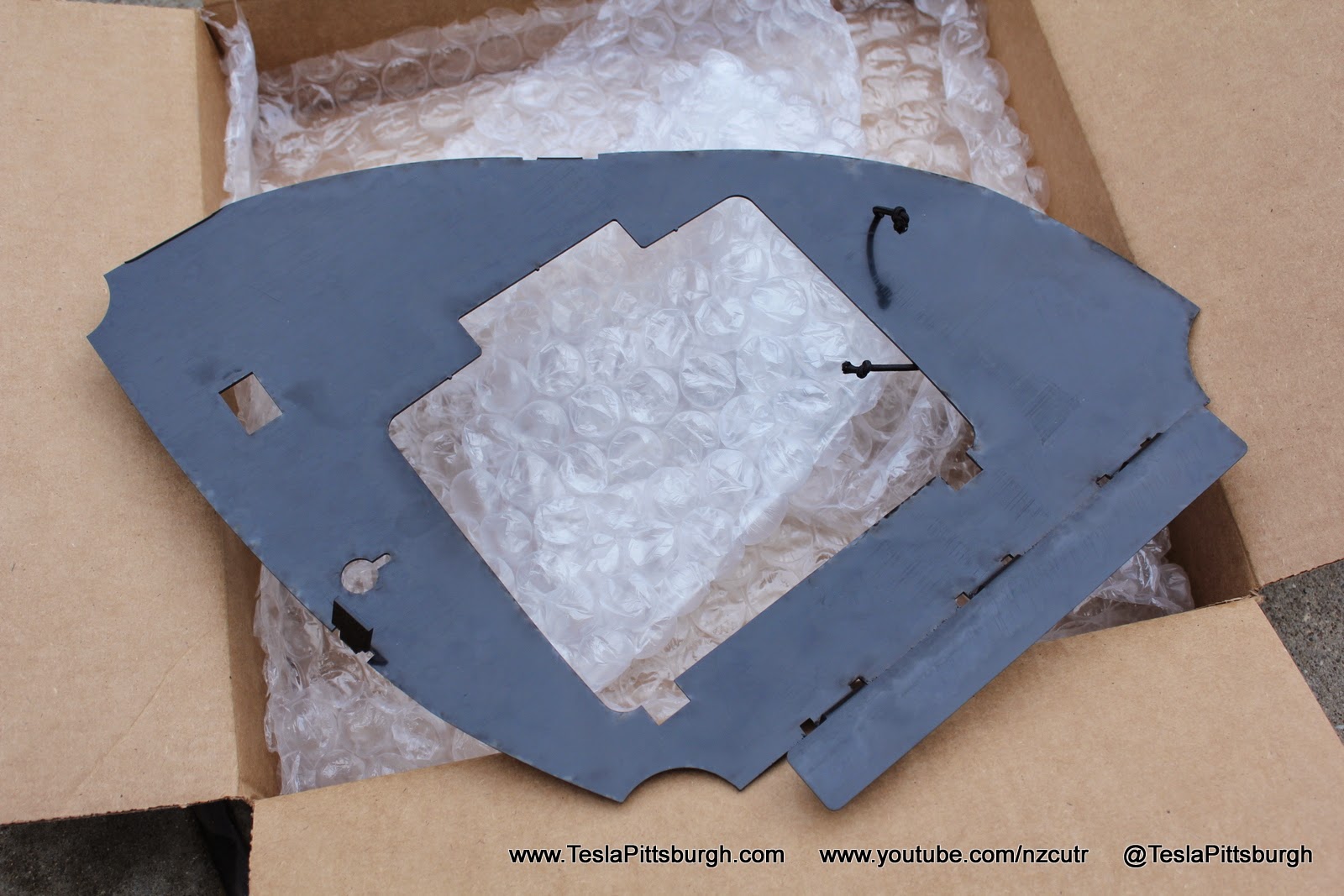 The trim panel is the biggest selling point of the kit. As advertised, It fits the space perfectly and is easy to install.  The panel is just grained plastic, but from a few steps back it does a reasonable job of mimicking the trunk liner carpet.  The panel is held in place by a couple bent tabs that you flex the panel to slide in behind the trunk's trim.  The panel probably had its flimsiness dictated by how much it had to flex to pop the tabs into place and though rugged, it does feel very coarsely made, like recycled dollar store toys.
The top of the panel is kept pretty tight but the bottom is ridiculously loose.  Sturdiness has been sacrificed on the altar of easy removal, especially when weighed down by a full adapter case.  Don't get me wrong, it won't fall out of its place and I detected no rattling, but it protrudes just enough into the trunk that you can't help but brush against it and bemoan its wobbliness-- and you can't avoid doing that if trying to access the "basement" storage area.  It's a real "downer" in more than one way. 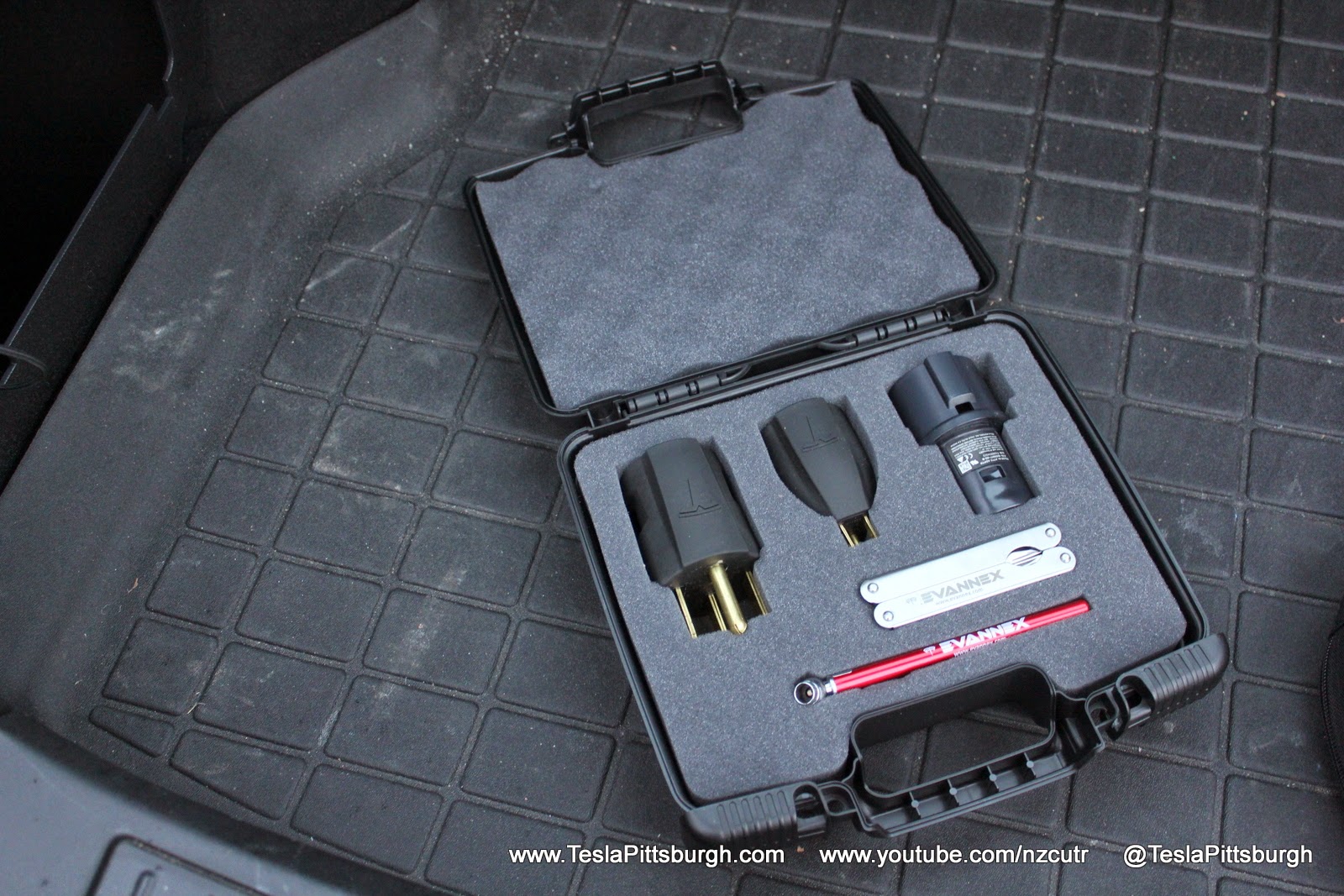 The case itself is underwhelming.  On mine the EVannex sticker refuses to live up to its name and no one will mistake this for a factory accessory.  The foam inserts are perfectly shaped and cut for the tools and adapters-- this is the high point of the ASLK-- and made of a good quality foam.  Each opening is specific to a particular adapter, the NEMA 50, J1772 and standard plug.  The case latches very securely and has loops for a lock but-- let's not kid ourselves-- the case would be pulverized by a moderately sized boot heel. 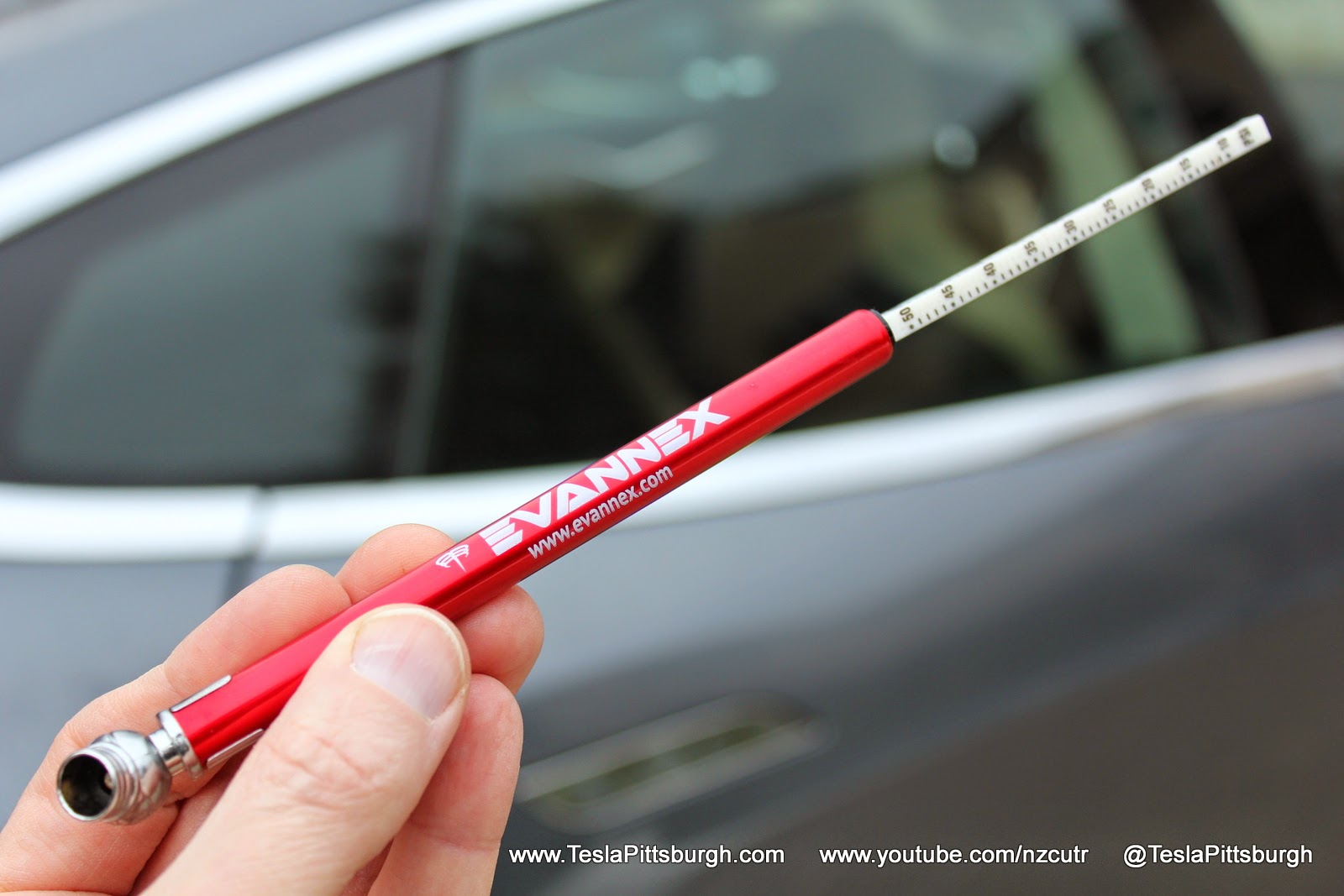 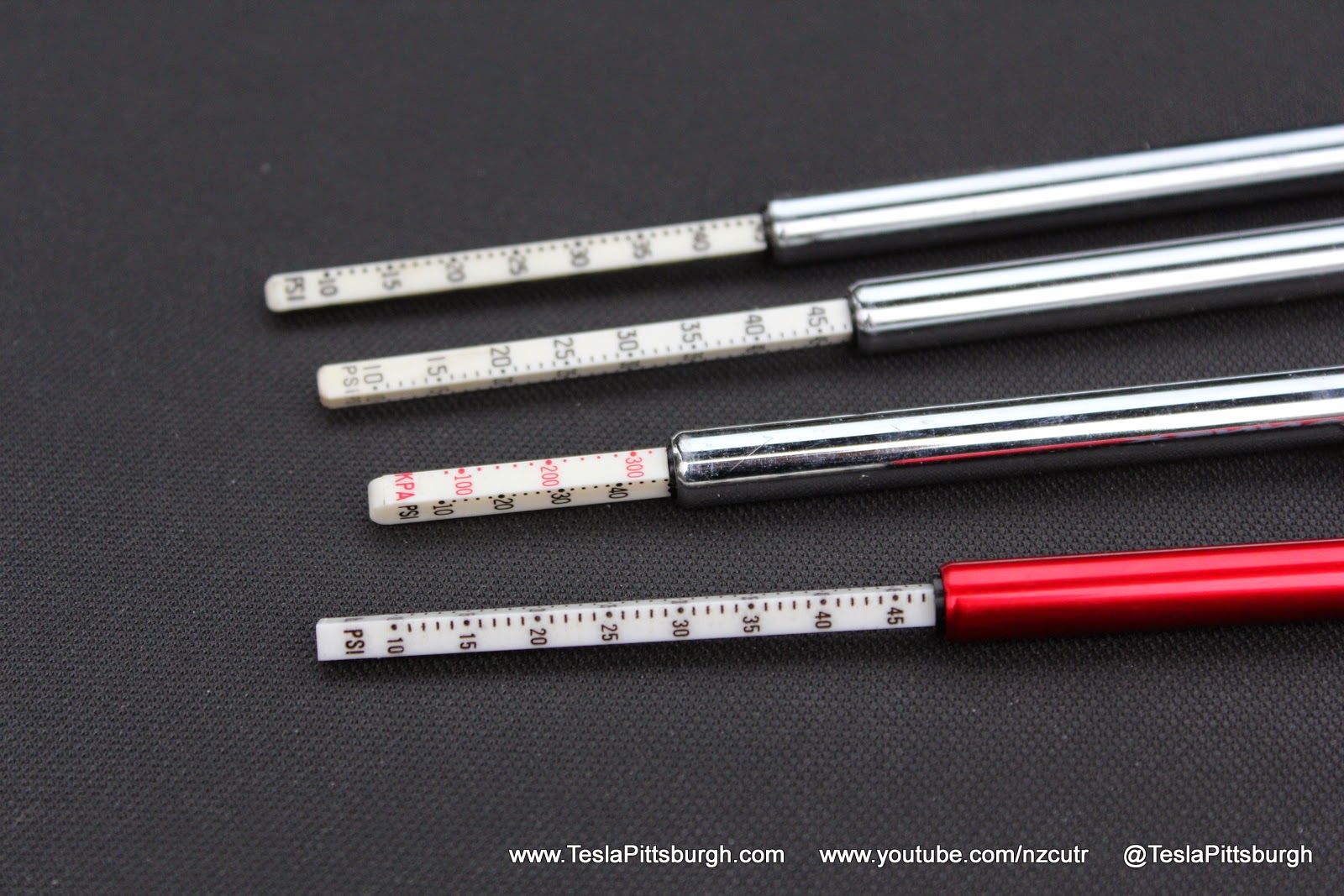 Joining your adapters are some EVAnnex branded tools.  Provided with the kit is a tire gauge and multi-tool.  The tire gauge is an eye catching red and will read pressures up to 50 psi.  It didn't feel any more or less robust than other gauges I had so I did a test using all my other gauges.  The results suggest the EVannex gauge is no better or worse than what I already had-- none of which were what I would call expensive test instruments. 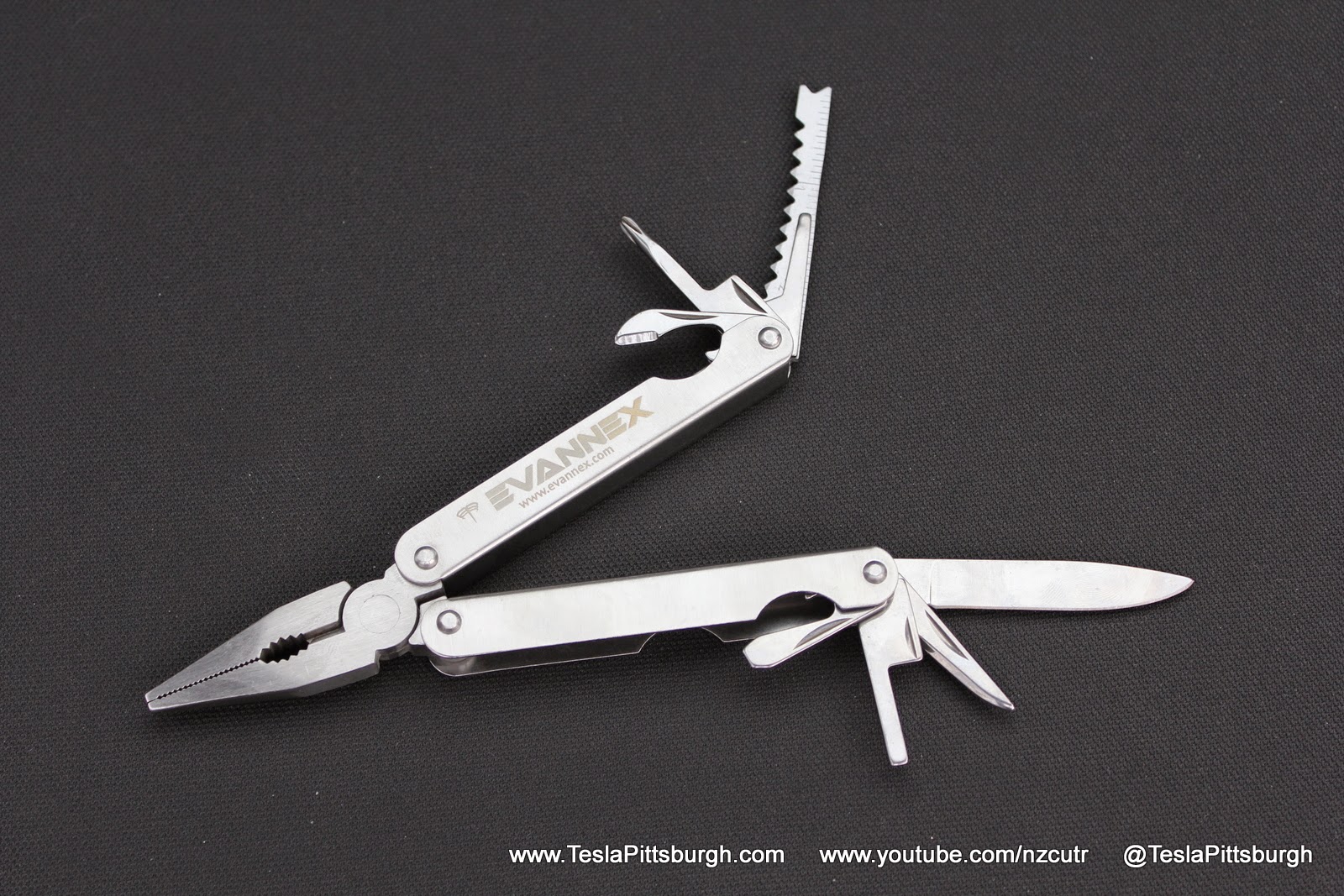 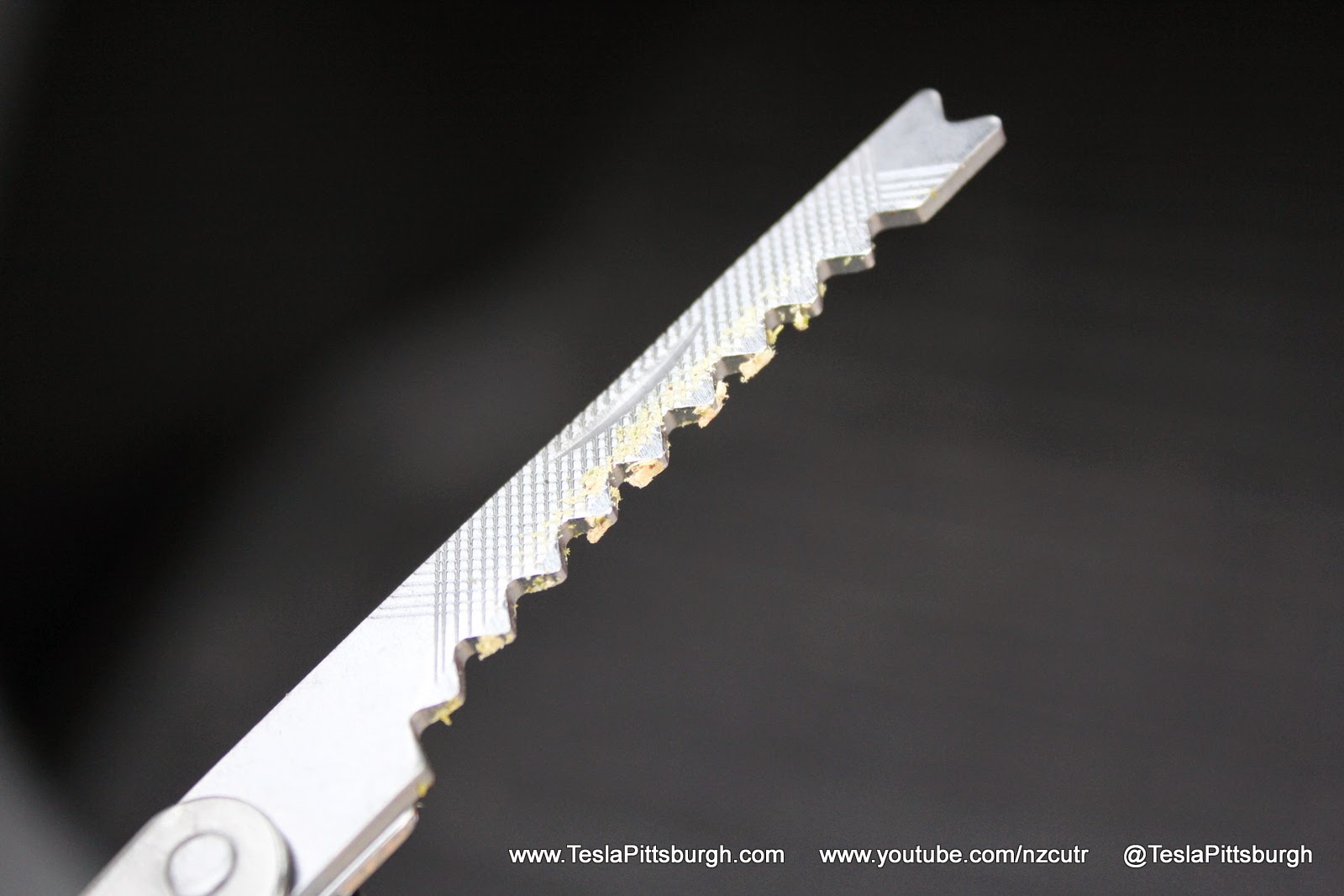 The multi-tool is another Leatherman knock off.  Like all the other copies this one doesn't match the heft or strength of the original.  It features the typical assortment of tools and the action is good, tight enough to stay out but not hernia inducing to get out what you want.  The Philips head screwdriver and flat head driver ends seem to be much fatter than they should be, but I didn't find a Phillips screw I couldn't turn.  The fat end of the smaller flat head was definitely a problem fitting small screws and not much better than using the end of a dime if your last name is MacGuyver, but nothing a Dremel couldn't rectify.  Likewise, I tried the saw blade on a small dead branch and concluded I would die of hypothermia if relying on it for anything other than fixing a snagged fingernail.  Better to call Tesla Roadside Assistance. 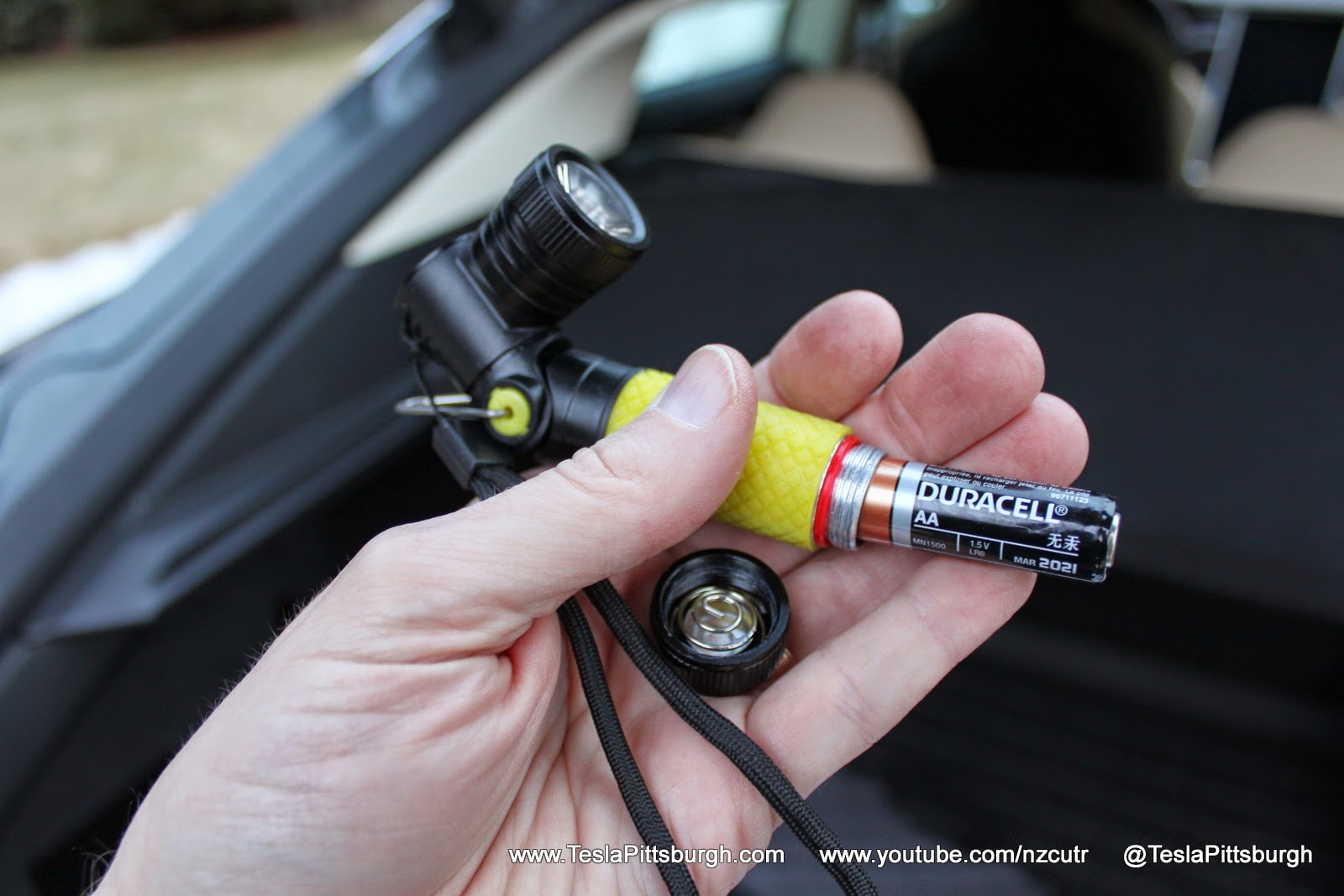 The final piece the ASLK puzzle is the clip-on flashlight.  It's small enough I was concerned it would be a watch-battery powered affair where replacing the whole unit is cheaper than new batteries.  Thankfully it uses a standard AA battery to light up the LED and it is BRIGHT.  The aluminum housing has a clip attached, is weatherproofed and with a rotating head. 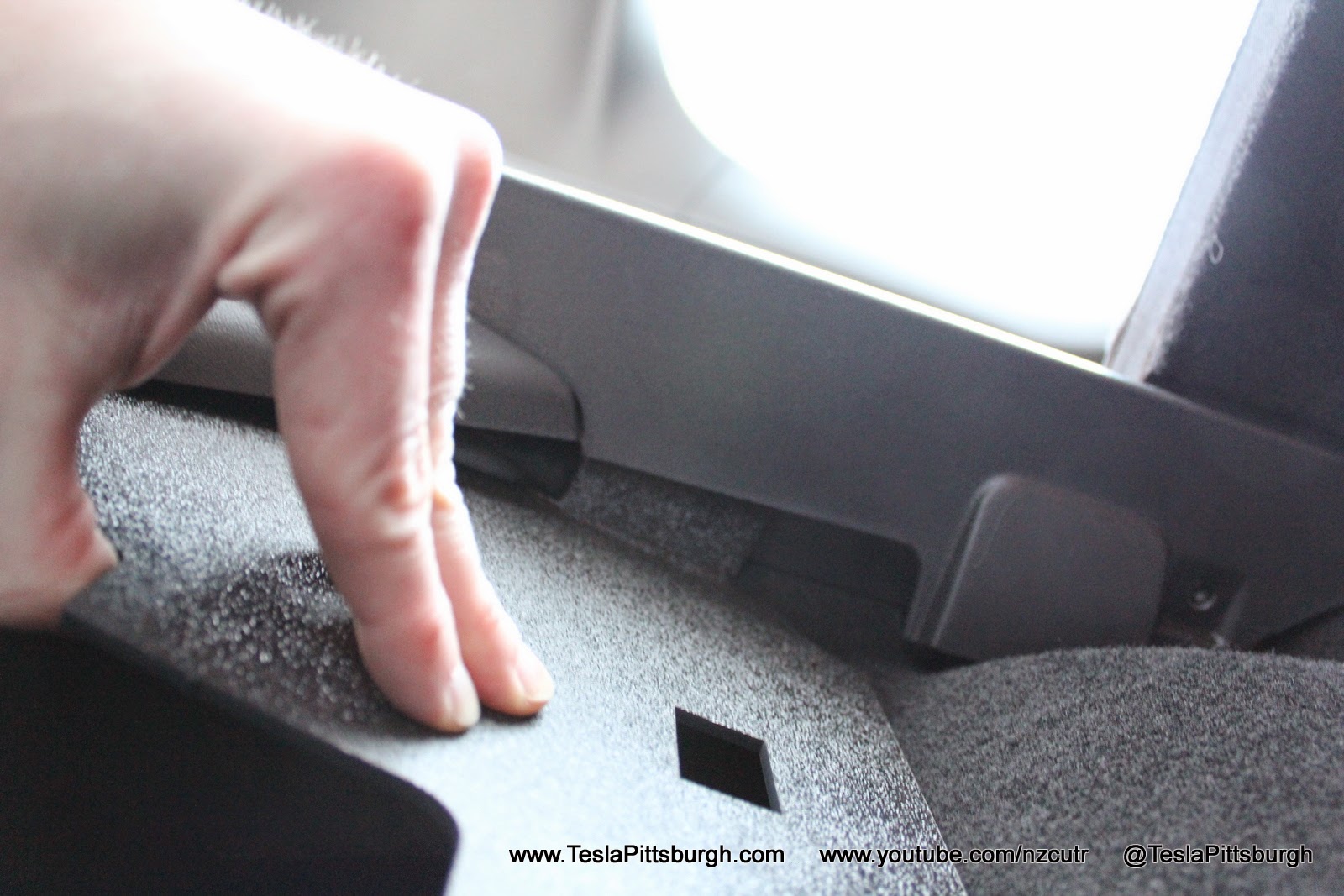 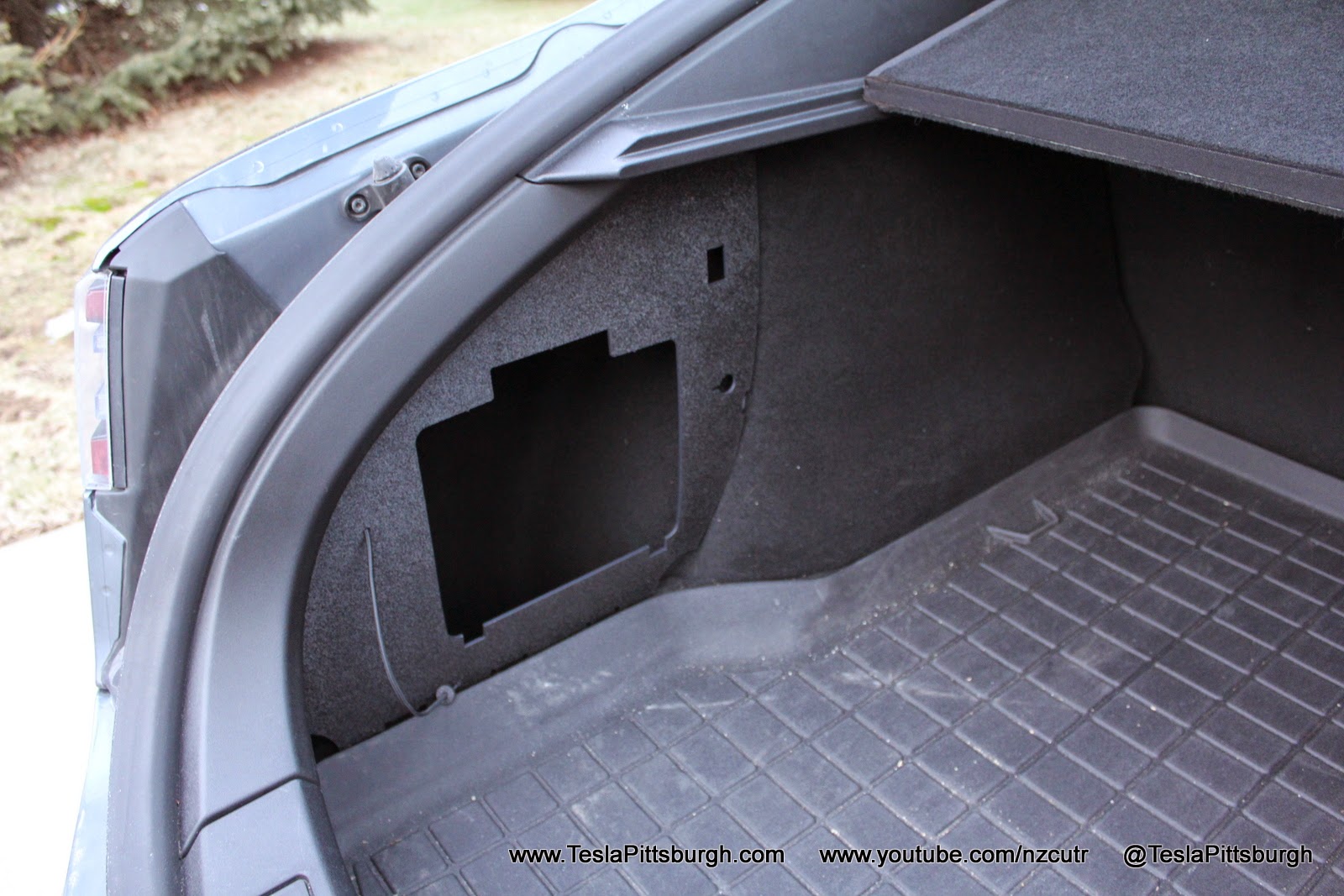 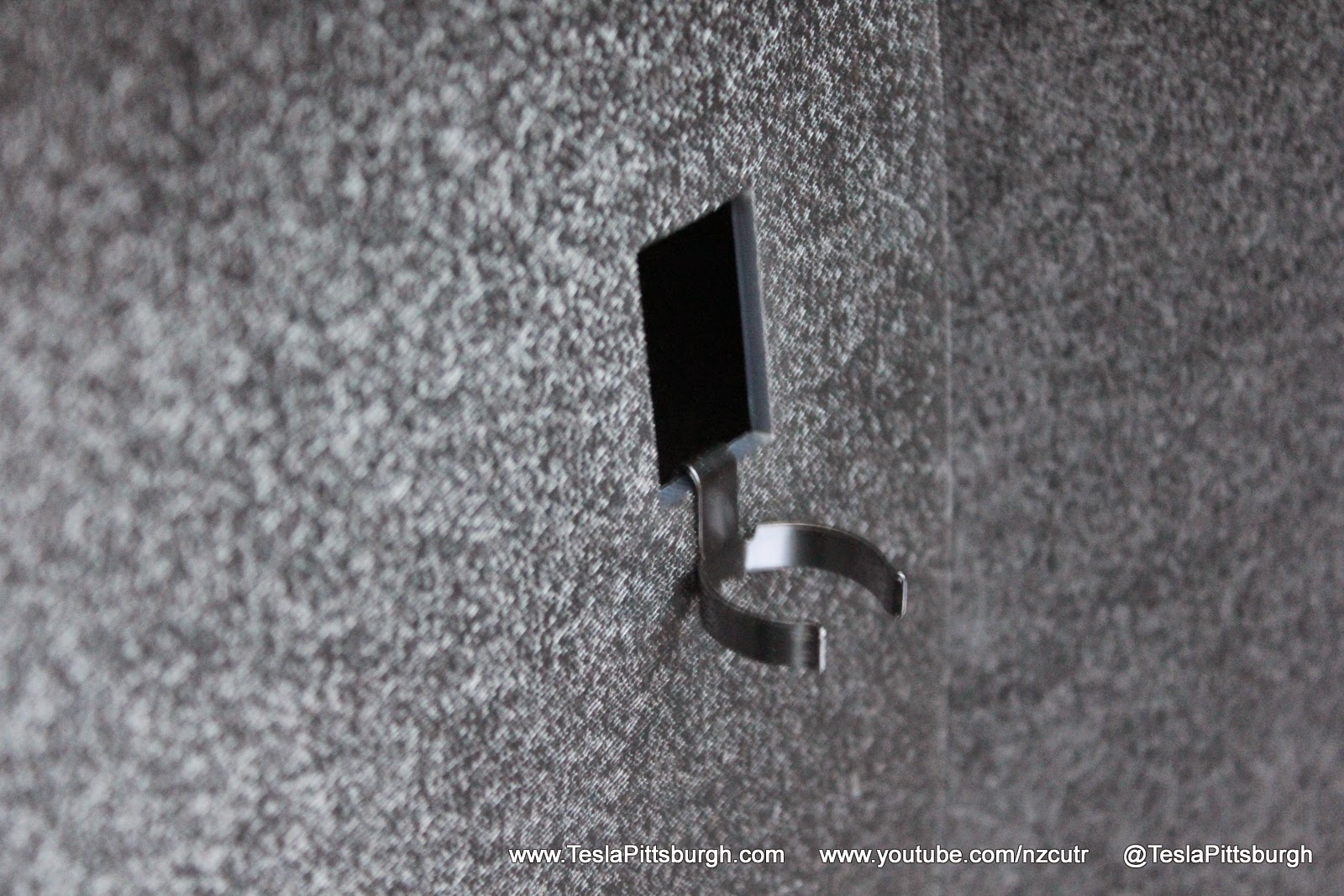 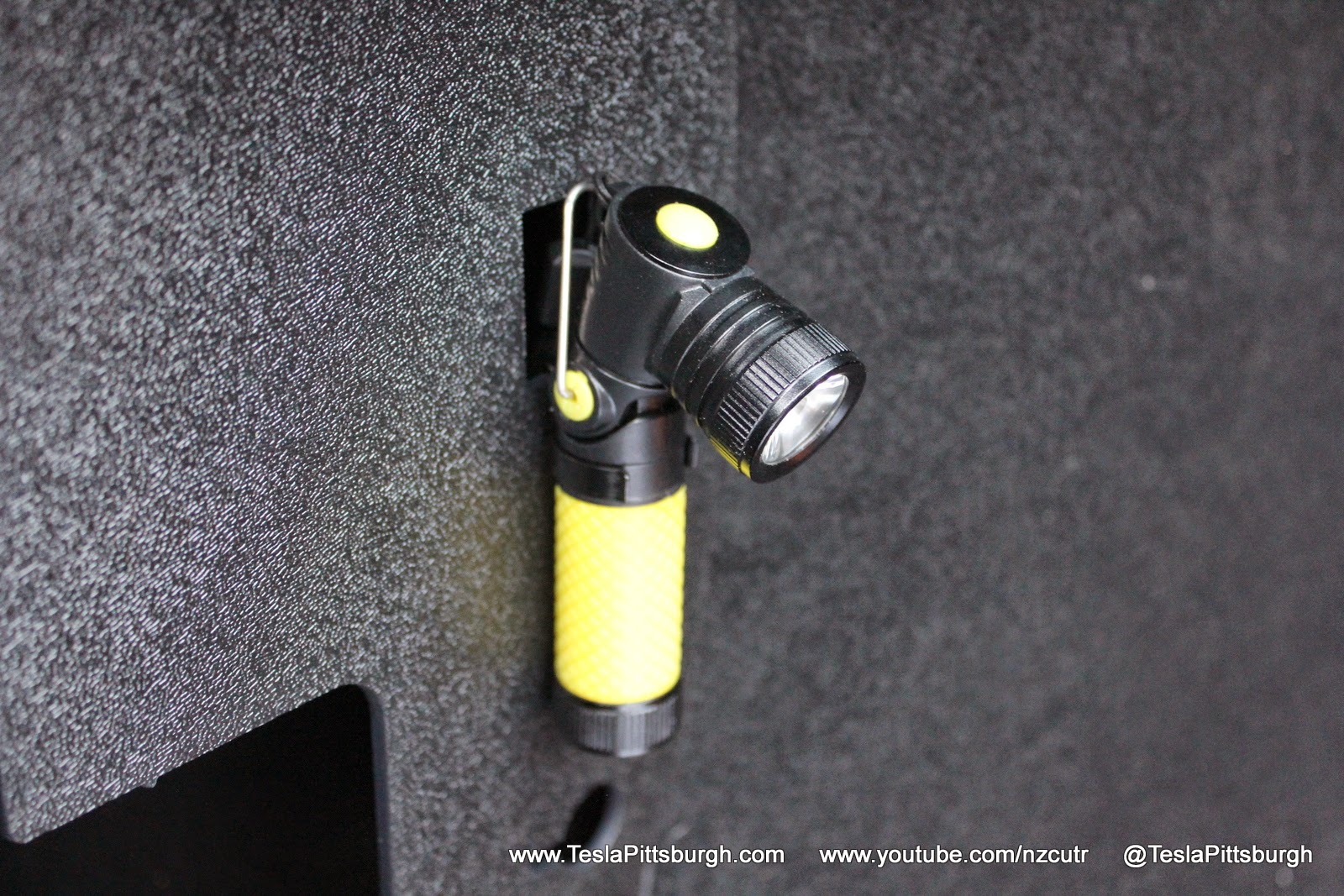 With the panel popped into place, assembling the rest of the ASLK is simple.  The case is loaded, latched, balanced into the opening and held there by an elastic cord (it will not stay there otherwise).  There is a square hole in the panel where the flashlight is supposed to clip on but I found it impossible to attach directly.  So I jammed on the clip first (where it will stay forever) and then I could easily mount and dismount the flashlight as needed.  Unlike a factory trunk light, this one requires you to click it on and off, obviously.  Worth noting, this installation is fully compatible with the rear jump seat-equipped cars and doesn't not impinge on elbow space. 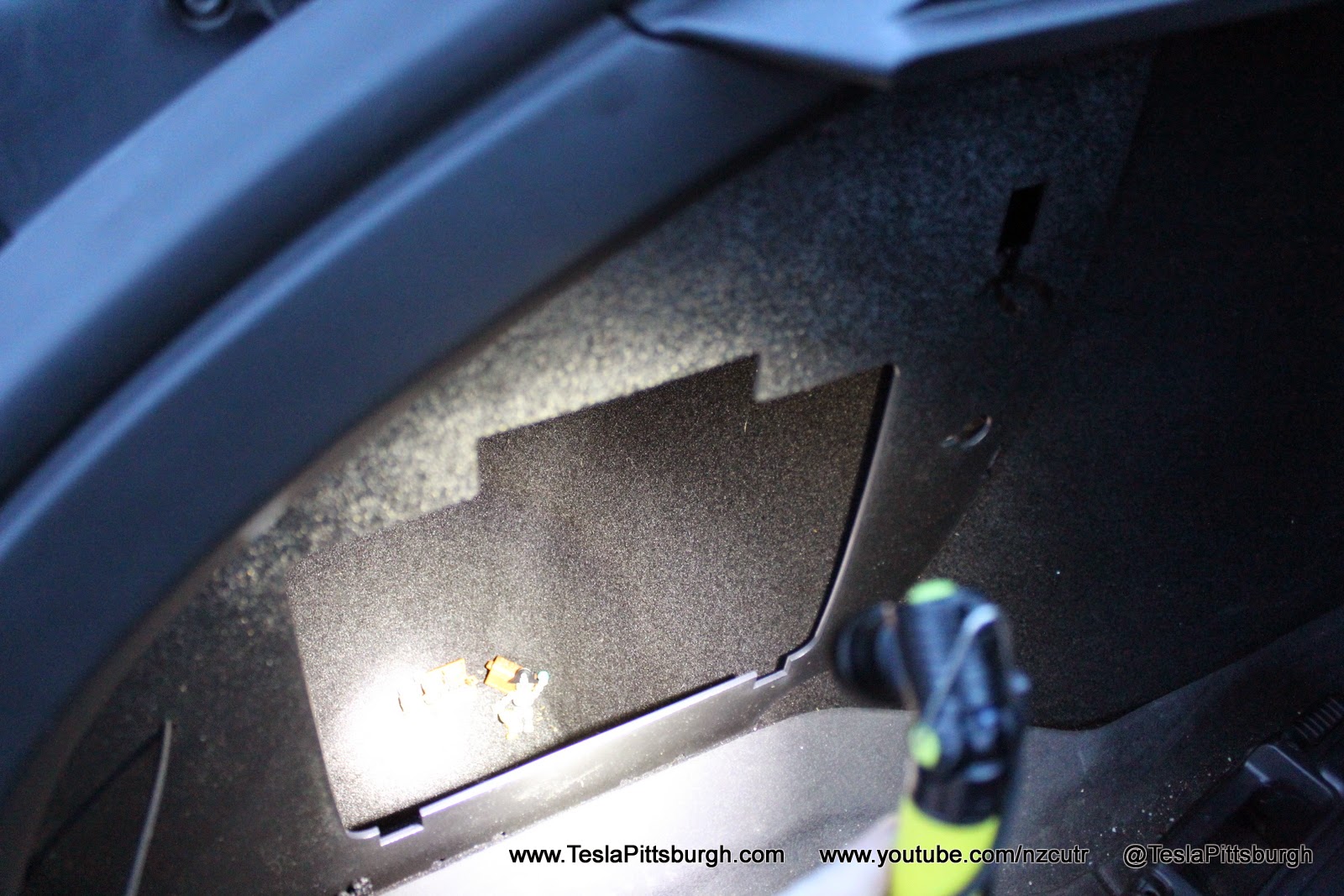 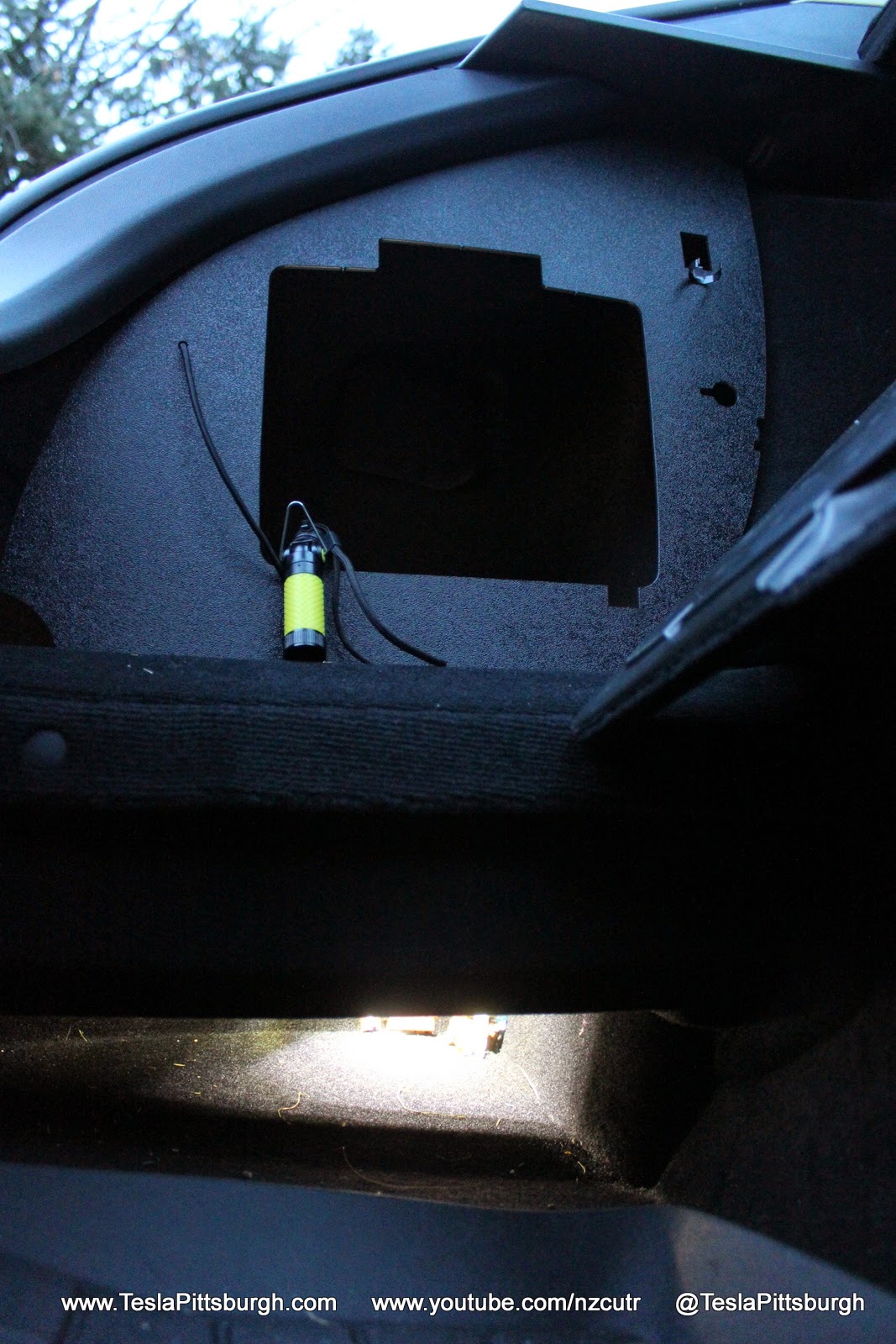 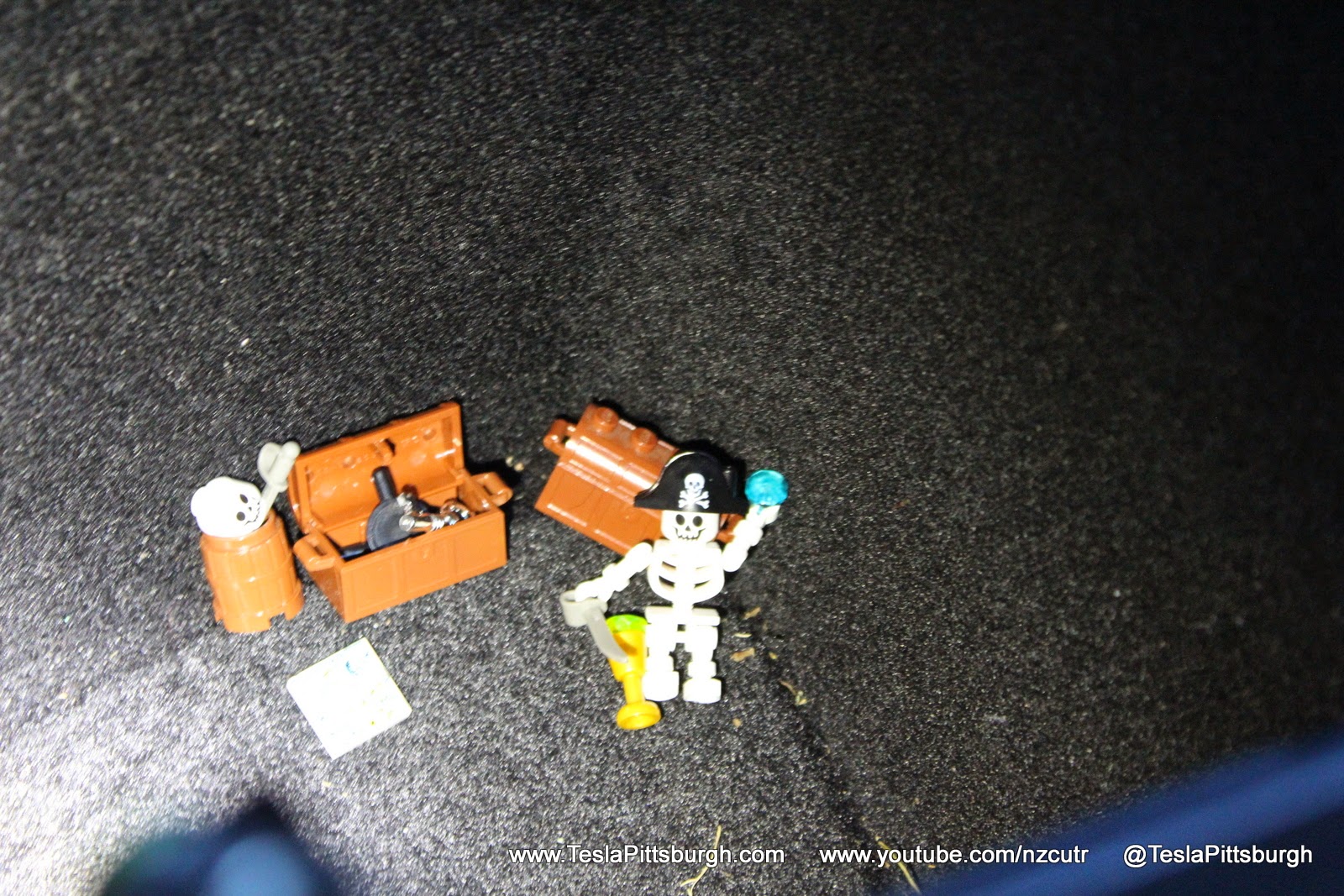 The hidden feature that EVannex doesn't advertise is what happens BEHIND the case.  With the storage hole covered, there is a VAST space still available as the case doesn't really extend back behind the panel.  Though the valet mode in the 6.2 firmware update makes this less important (allowing the frunk and glovebox to be locked), the possibility remains that you could have a large out of sight and not immediately obvious space to stash expensive items.  To really secure them you'd need to plug the opening between the central lower trunk as well, but there is a lot of potential for cleverness here.  I would suggest an add-on lower panel would be worth EVannex's consideration, but they'd need to hold the line on price. 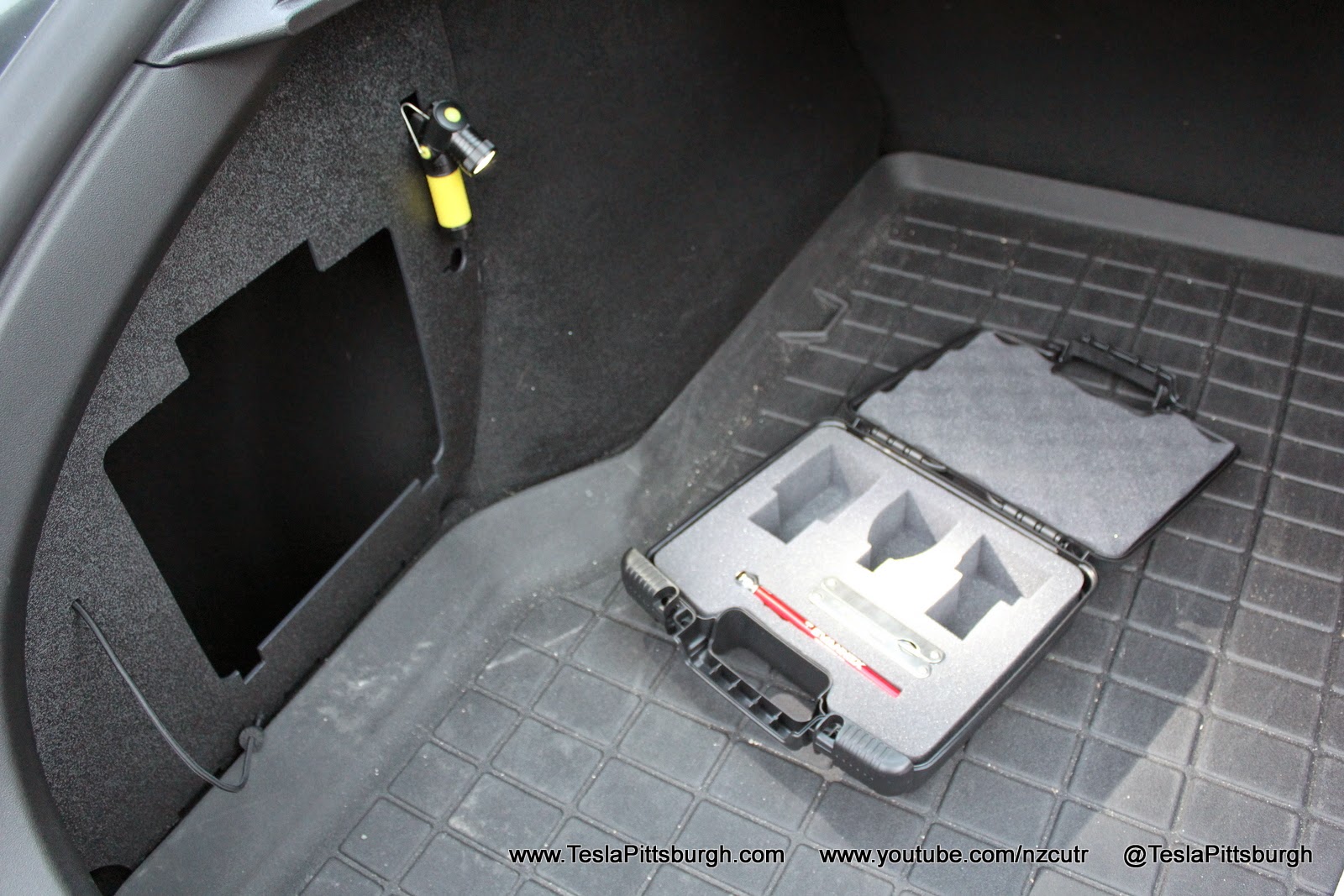 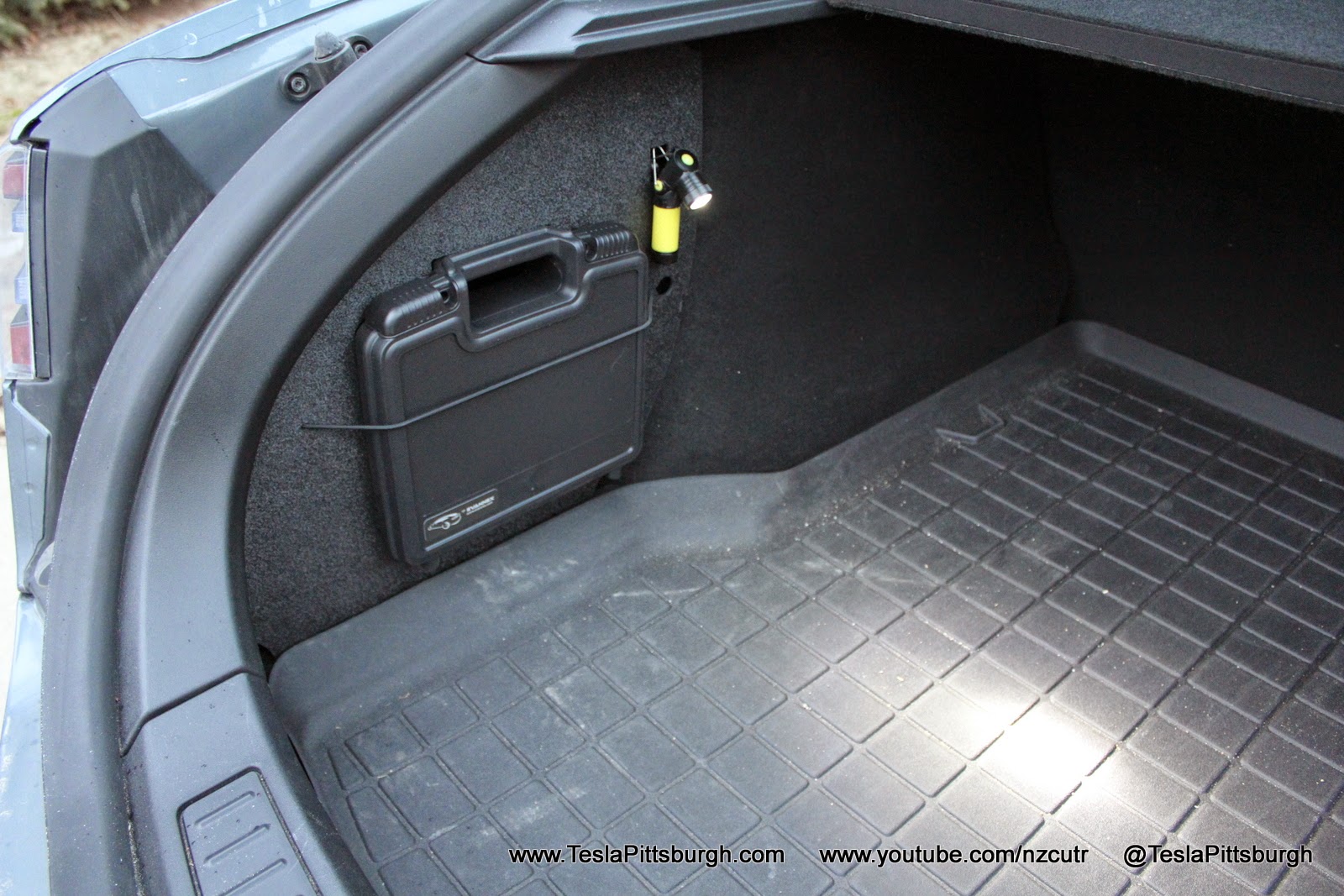 All together, the kit looks pretty good.  It does what it says it does-- no more, no less.  I do not think it rises to the level of quality  and engineering that EVannex has spoiled us with before but the price is considerably less.  Fundamentally, the question becomes one of value.  I did not believe at first the value was there, but I sought out comparables to see where the truth was and it softened my initial reactions.  Everything except the trim panel is available on Amazon.  The case is $30, the tire gauge is $6, the flashlight is $11, the multi-tool is hard to pinpoint but probably about $20 and that's a total of $67.   If you believe the trim panel alone is worth $52, plus the custom foam inserts, then you have your answer-- those are the only pieces actually unique to EVannex.

I happen to think that the value is there.  It would take me a couple hours and a lot of messing around to make a panel of this unique shape and colored to match... and at my hourly rates, with my to-do list already long, the ASLK becomes a better choice and clearly EVannex hasn't priced it unreasonably.  The real question then becomes, do you need/want it.   That's a harder question to answer.  When a heavy hitter comes up to bat you expect a home run from them and this-- as it is sold now-- is more of a bunt.

EVannex offers a modest product at a modest price.  It is somewhat of a solution looking for a problem.  With few proprietary parts, it lacks the flair we're used to but they've assembled a kit that works as advertised.  Storage space loss is minimal but now mostly hidden, a side benefit for cars with jumpseats or without the parcel shelf.  Finish quality keeps this from being something you'd give as a gift but it blends in nicely enough for personal use.

Thanks for visiting us here! CLICK to read more at www.TeslaPittsburgh.com, check out the videos on our YouTube channel at www.YouTube.com/NZCUTR and follow us on Twitter: https://twitter.com/TeslaPittsburgh.  PITTSBURGH AREA OWNERS, join the conversation here: https://www.facebook.com/groups/TeslaPittsburgh/

This review originally appeared on Teslarati.com.