I can't take all the credit, but I will take just a teeny-tiny bit:

Ladies and gentlemen, may I introduce to you the newest member of Tesla Motors and one of our very own PITTSBURGH representatives, KATIE! 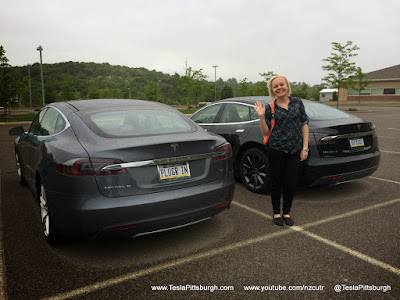 I had the pleasure of talking with her this afternoon (as my Twitter followers know) and left with the confirmation that we really need to start formalizing what we do here a little bit.  SOooo.....

It was about a year ago that we took delivery of Serena, our intergalactic spaceboat of light and wonder.  Since then we've racked up more than 15,000 miles and made a number of road trips and discoveries (which we've written of here).  Joining alongside us through this past year have been an ever growing fleet of new Teslas on the Pittsburgh roadways and, I hope, with the addition of a Pittsburgh salesforce we'll see more and more and MORE.

When the Cranberry Supercharger opened last year, the hotel manager there invited us to use her place anytime we wanted to have a "club meeting".  Jake and I kind of laughed it off... and have laughed off the notion several times since then when the topic has come up.

There is not a Tesla Pittsburgh club.  There just isn't.  But maybe there should be? 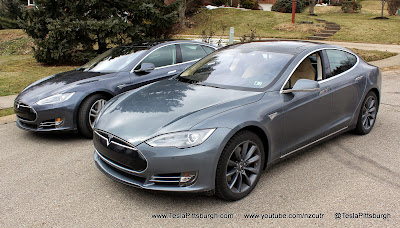 We've met a number of our fellow local owners and there are a lot more out there that we haven't (here's looking at YOU, Mr. Crosby) but would love to.  I think the blog is easy enough to Google and find... maybe even FIND A JOB, right Katie?  But this is not an interactive place... not really, despite the odd comments here and there.

A few of us owners and prospective owners have been meeting up at irregular times and places-- sometimes I tweet them in advance-- but it's too hard to coordinate mass meetings with people living all over the place.  So here's what we'll do...  and see what the reaction is:

As was suggested by our LOCAL TESLA REPRESENTATIVE, we have established a Facebook group that local owners/enthusiasts are encouraged to join... so if you have a Tesla (or are getting one) and have a Pittsburgh area connection... JOIN IT!

I  don't want to belabor the point, but suffice it to say the goal is to keep that group geographically defined to local people.  No one will be excluded, but there are plenty of places to get general Tesla stuff covered so better to keep the group local and intimate.  That way we can share very specific information and assistance.... and eventually, if the mood and timing is right, we'll establish an actual meeting sometime.  The seed was planted, we've watered it for a year and now that Tesla is joining us at Ross Park Mall it's time to see if we can put down some roots.

Personally, I'd love to see big backyard BBQ by the end of the summer... with all of us drooling over a Model X Design Studio.  Who's with me??

I know one person who is....  Katie!  So I wrote earlier that I would take a little credit for our new local representative, so here goes:   She found the job posting after coming across my previous post about the Ross Park Mall location, which she went looking for after Jake pointed out the possibility to her.  Win.  Win.  Win!