"Will it road trip?"  Variations on that question are among the most common ones we get.  "Where do you charge it-- if not at home?"  My usual answer is to point out that electricity is, after all, everywhere-- the real question is really in regards to how long it takes to charge it.  Well, we were about to find out.  After our short shake-down day-road-trip, we were eager to see if "it really does that" on a bigger journey. 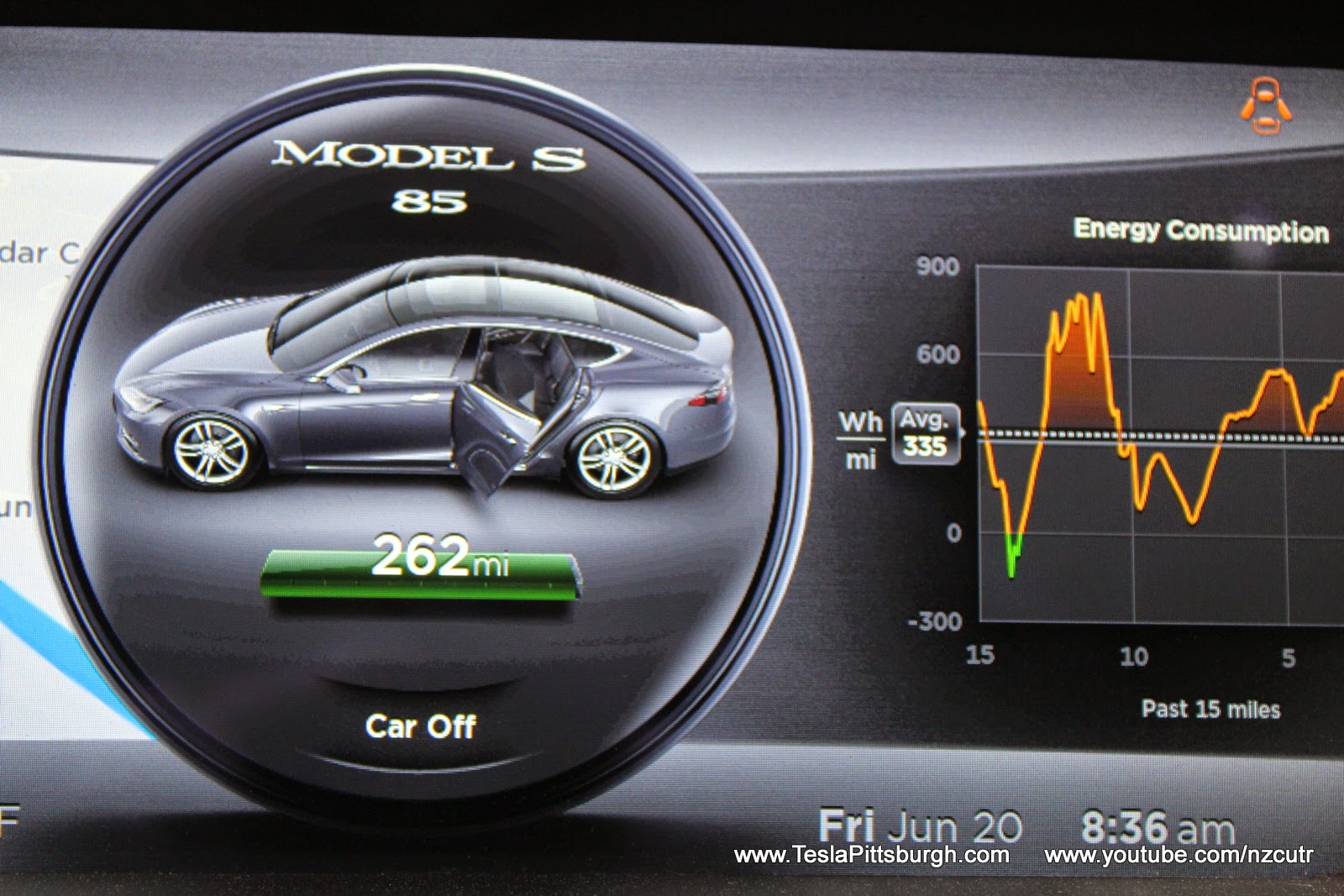 So, with a wedding in New Jersey as our first destination, we charged up to nearly full, loaded up, and set out on a week-long 1200 mile trip... with no gas!   We quickly found ourselves scrambling and improvising our plans, however, with second guesses and regrets clouding the first leg of our trip.  Rut ro.

First of all, let me outline what the plan was:

The wedding was in Princeton, NJ but we were going to be staying in Philadelphia with relatives.  Since my daughter was in the wedding party, that would mean two days of trips to/from Philly-Princeton (rehearsal/dinner and ceremony/reception), but it also meant we'd be passing the Hamilton Supercharger (near Trenton).  There would be no charging ability where we were staying but with the Supercharger close by we weren't worried.

After the wedding festivities, we'd turn South and go to stay with more relatives near Washington DC.  We'd play the tourists from there, commuting from their place to/from downtown DC for 3 days.  Next we'd drive from DC to yet more relatives in the mountains Southwest of Harrisburg.  A day of hiking would be followed by another move to a music festival in mid-Pennsylvania for a day and then night of camping... then home.

Getting from our home near Pittsburgh to Philadelphia was going to be the tricky part.  We live just a few miles from the Cranberry Supercharger and the PA Turnpike interchange there.  Normally we'd just hop on the Turnpike and follow it all the way to Philadelphia.  Unfortunately, despite an aggressive building schedule, the PA Turnpike is still missing at least 2 Supercharger locations on the Eastern side of the state.  Our options were: (A) range charge in Somerset, PA or Hagerstown, MD at those Superchargers and then plan on charging at a Tesla store/service center as we entered Philadelphia, (B) plan on finding/using public chargers in Harrisburg while on a lunch stop and then go direct to Philly or (C) stay on the Supercharger route as it currently exists and divert into Maryland and approach Philly by way of the Newark, DE Supercharger.

Being "newbies" the decision was made to take the slightly longer route and stay close to the Superchargers.

This would turn out to be a huge mistake.

Secondly, let me explain why we left without fully charging the car.  Partly it's because I'm chicken.   I know pushing the full capacity of the pack isn't great for its long term health so I charged it to about 90% overnight and then restarted the charging process when I first got up the morning of departure.  It charges slower as it gets full but we still pushed well into about 95% charge while loading the luggage.  We've never fully charged the car so I actually don't KNOW what the full range is-- the highest I've seen is 267 miles but even that wasn't fully charged.

Since we'd be on the Turnpike anyway, we'd be passing Somerset in about a hundred miles and Hagerstown was about 200 miles away.  Even adding in a generous buffer, 262 miles should/would be plenty to allow us to skip Somerset completely... and a few more miles was not going to make a difference anyway.  If we were using them faster than rated, we could still stop in Somerset for a few more electrons-- a nice option. 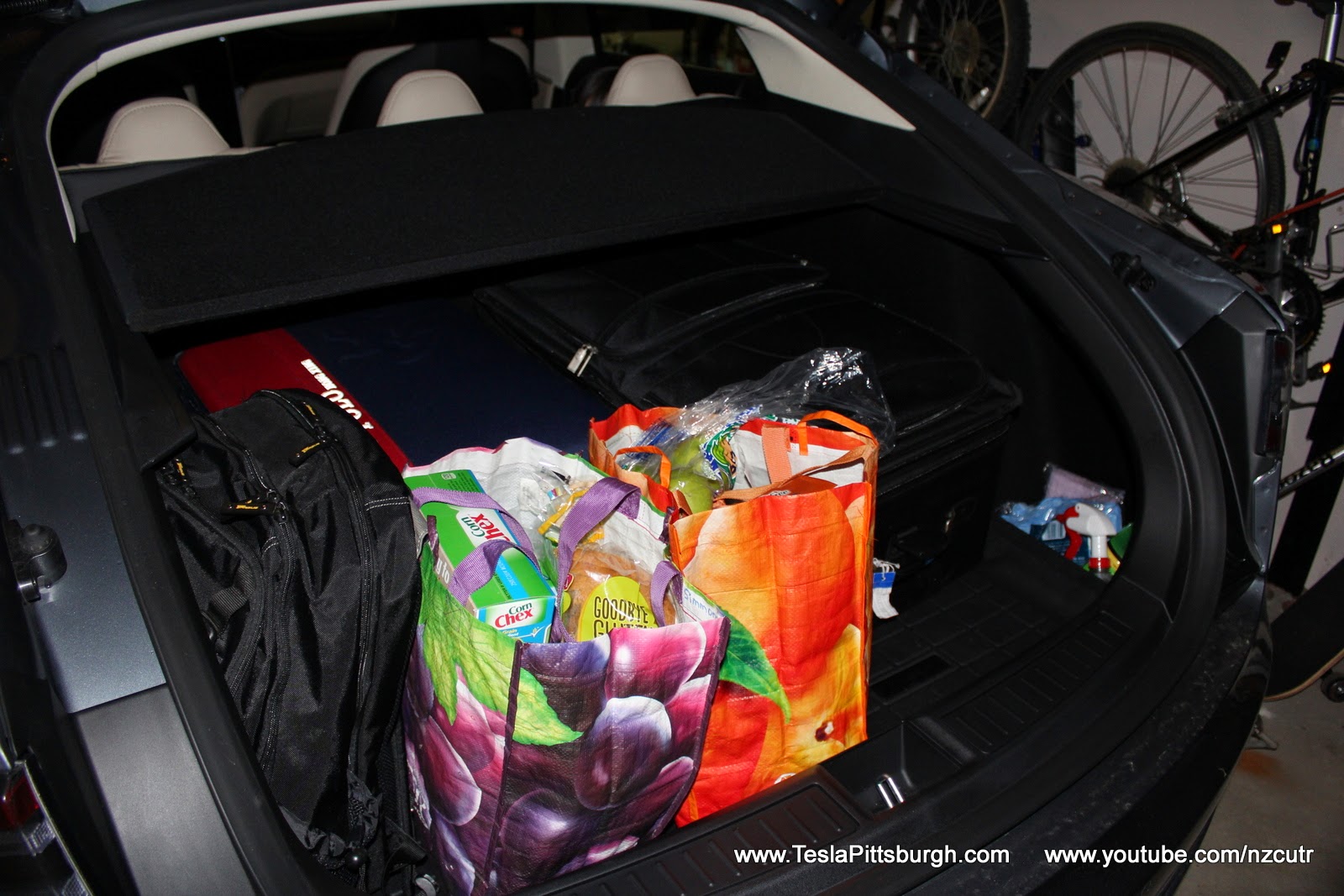 Next came the somewhat daunting task of packing for completely divergent events--  wedding and camping with some hiking and touristy stuff mixed in for good measure.  Good Lord, what were we thinking??

Fortunately the Model S is a tremendous pack animal.  All our shoes and some camping gear were piled into the compartment underneath the trunk (we call it "the basement" and it's where your exhaust/muffler system would otherwise be).  Computer/camera gear went into one of the saddle bags (large compartment behind the rear wheel on the side of the trunk where your fuel filler neck would otherwise be).  All the other wedding related luggage and food supplies fit easily in the main trunk (including 2 full sized suitcases and several shopping bags) and still fit under the parcel shelf (since we'd be parking in downtown DC eventually, keeping things out of sight was important). 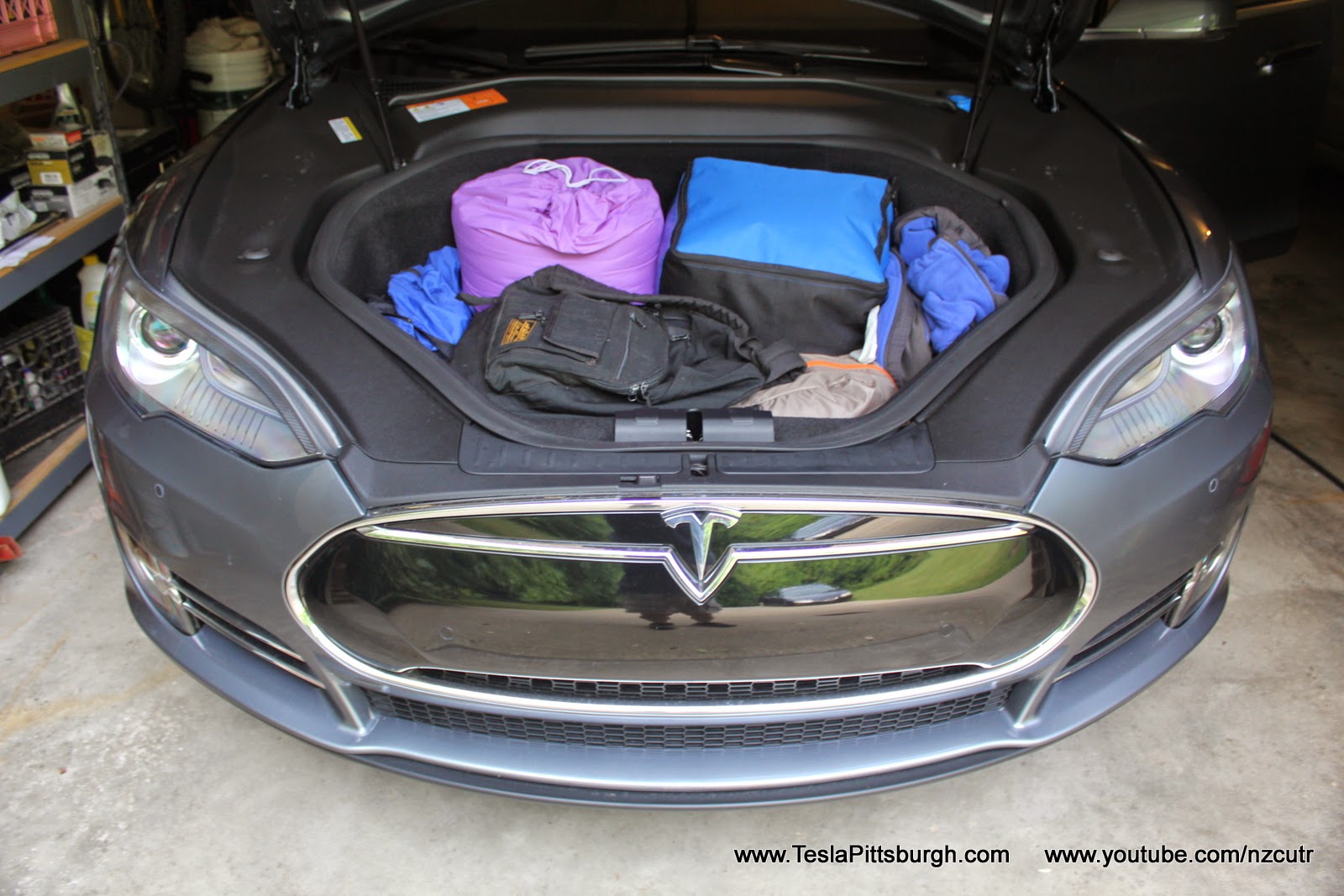 We still needed to get all our camping gear packed in-- but we still had the empty frunk!  Umm...  in case the term isn't familiar to you, a "frunk" is the "front trunk" (where your engine/transmission would otherwise be).  Piled into our frunk were sleeping bags, tent, and other misc camping gear.   All set! Fully loaded and nothing left behind or stuffed in.  Amazing.

With a quick double check of the lists and the route, we were off!  What could possibly go wrong??