After what seemed like months of negotiation and preparation, the Cars & Coffee / Tesla Test Drive combination finally came together!   For anyone who hasn't driven a Tesla (and that's still the majority of people, obviously) it's hard to understand what it feels like.  Even passenger rides (of which I've done a bunch of already) don't do it justice... you don't feel how instantly responsive the throttle is, you don't feel how reassuring the regen braking is, and you certainly don't get the full impression of just how much power is RIGHT THERE anytime you want it. 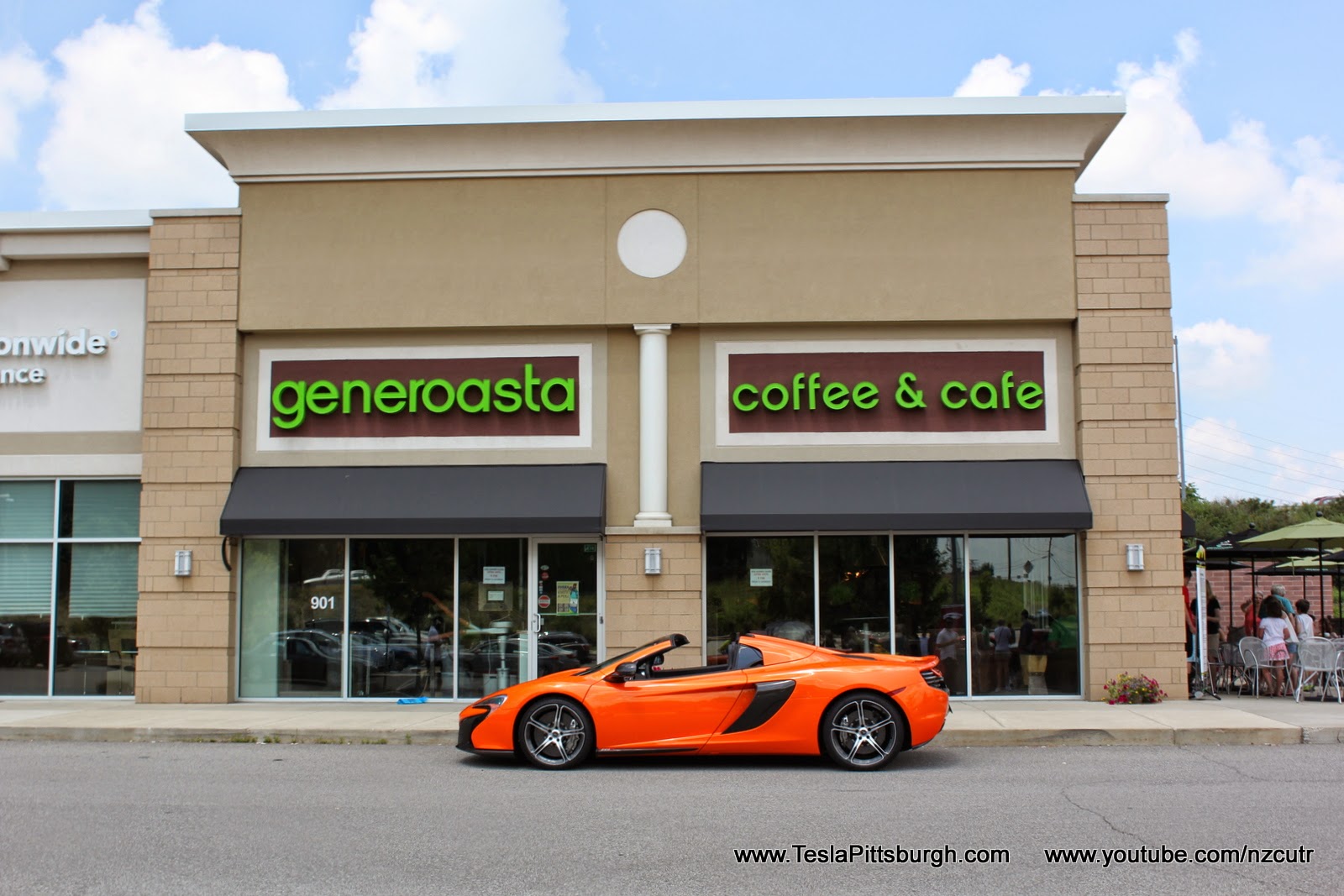 Certainly many of the C&C crowd knows about vast quantities of power, but even a McClaren has SOME throttle lag.   The question was, would Tesla win over any converts?  Would they "fit in" with the crowd?  Could some hearts and minds be won over?   Only one way to find out!

I almost didn't make it.  In fact, I wasn't planning to.  When the Tesla date was announced-- Murphy's Law-- it fell on one of my vacation weekends.  We were planning to be out of town until at least that evening and would easily miss the event entirely.   <Sigh>

Then, as fate would have it, we ended up returning home a day early from our 1200 mile road trip (to be another 9 part series of posts starting later this weekend).  Too tired to clean the car that night, I was up early and washing Serena so that we could represent Tesla best we could. 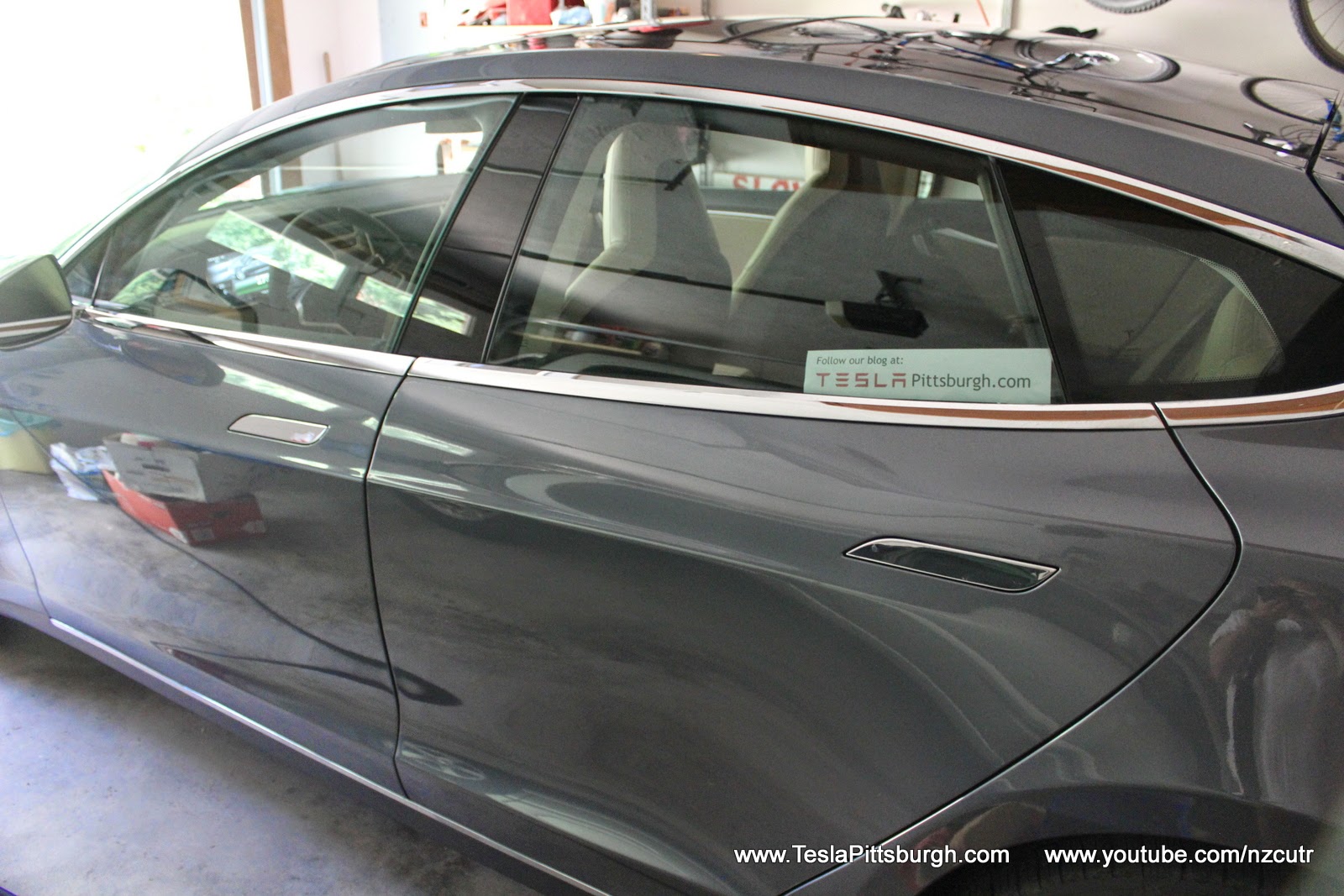 Of course, I had to also make sure TeslaPittsburgh.com took advantage of the Tesla Event spotlight!  Gotta love the Google Image search-- as I made up some quickie placards for the day (and future use). 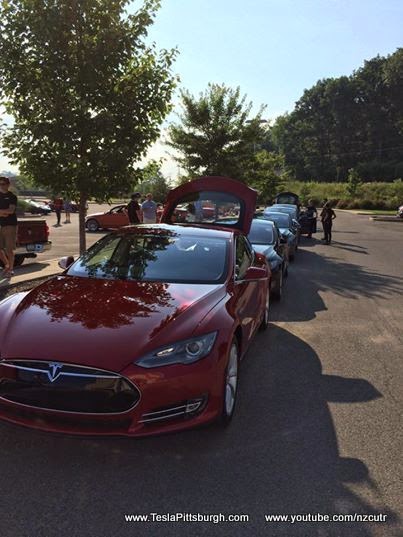 Jake has liberally used my pics so I'm sure he won't mind me stealing this one.  Tesla brought FIVE test drive cars plus a display car.  Pretty impressed with that.  On my test drive there were 3 cars and a subsequent trip brought 4.  Add in Jake's car and my car and the Tesla presence was strong!  At least 3 of the test cars were newer builds than mine (which I've had about a month)-- so they were FRESH. 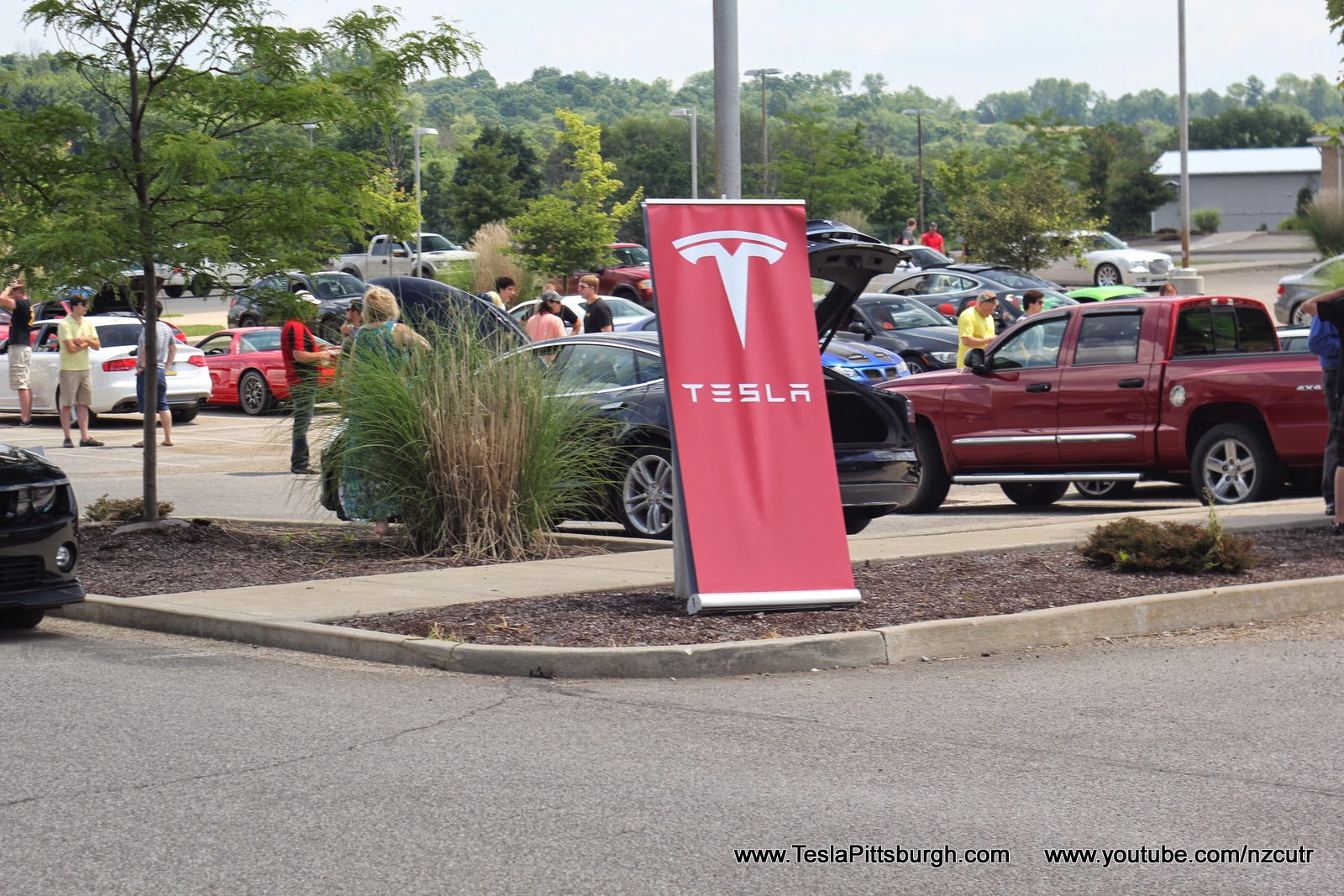 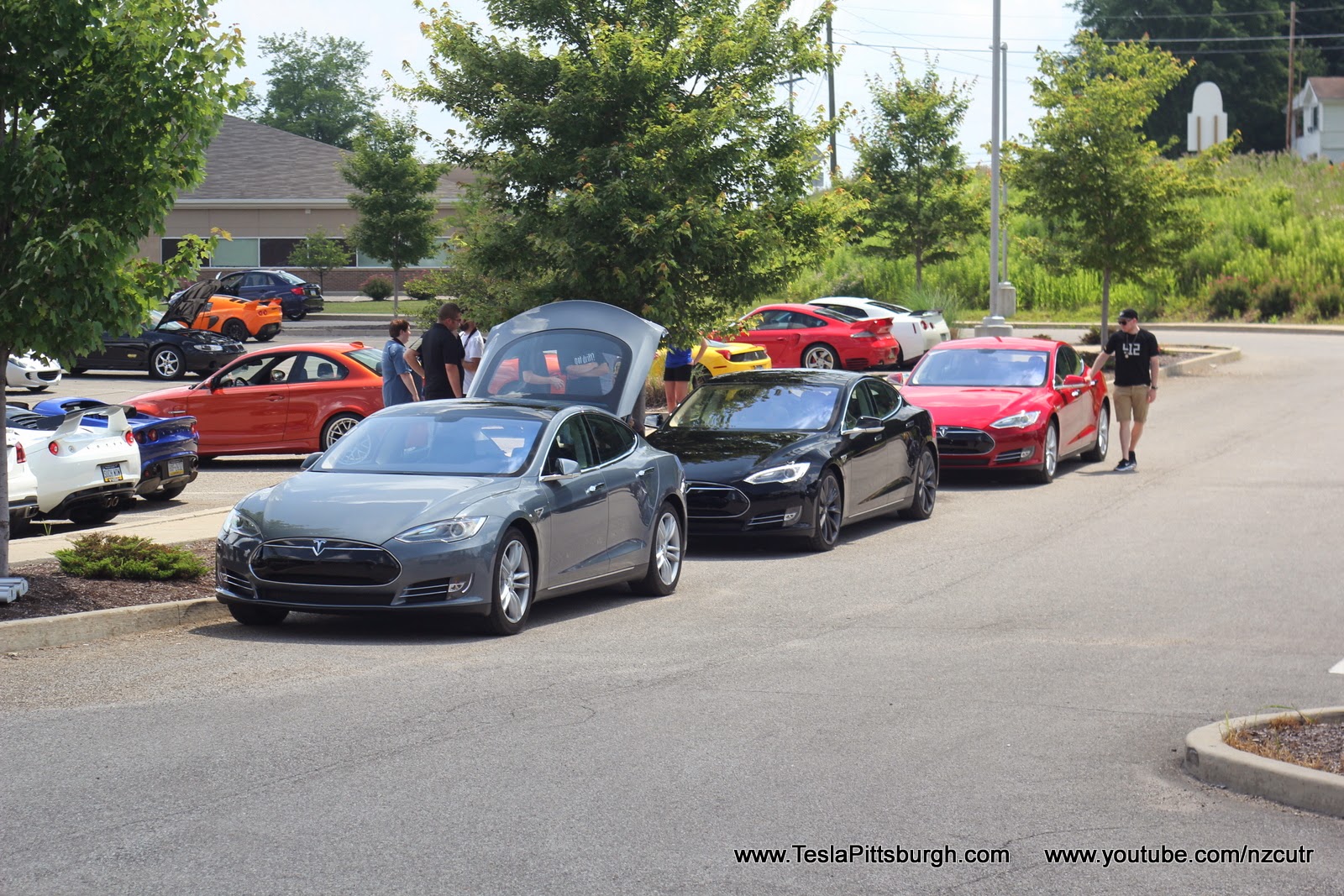 Not my car... but it did make me do a double take.  I actually was pretty happy to see this one going around on test drives because I've only ever seen Serena driving (from the outside) ONCE.  ONE TIME.  Literally.  Not that I'm vain about it-- I just happen to be very visually oriented and am curious what a Tesla in motion looks like! 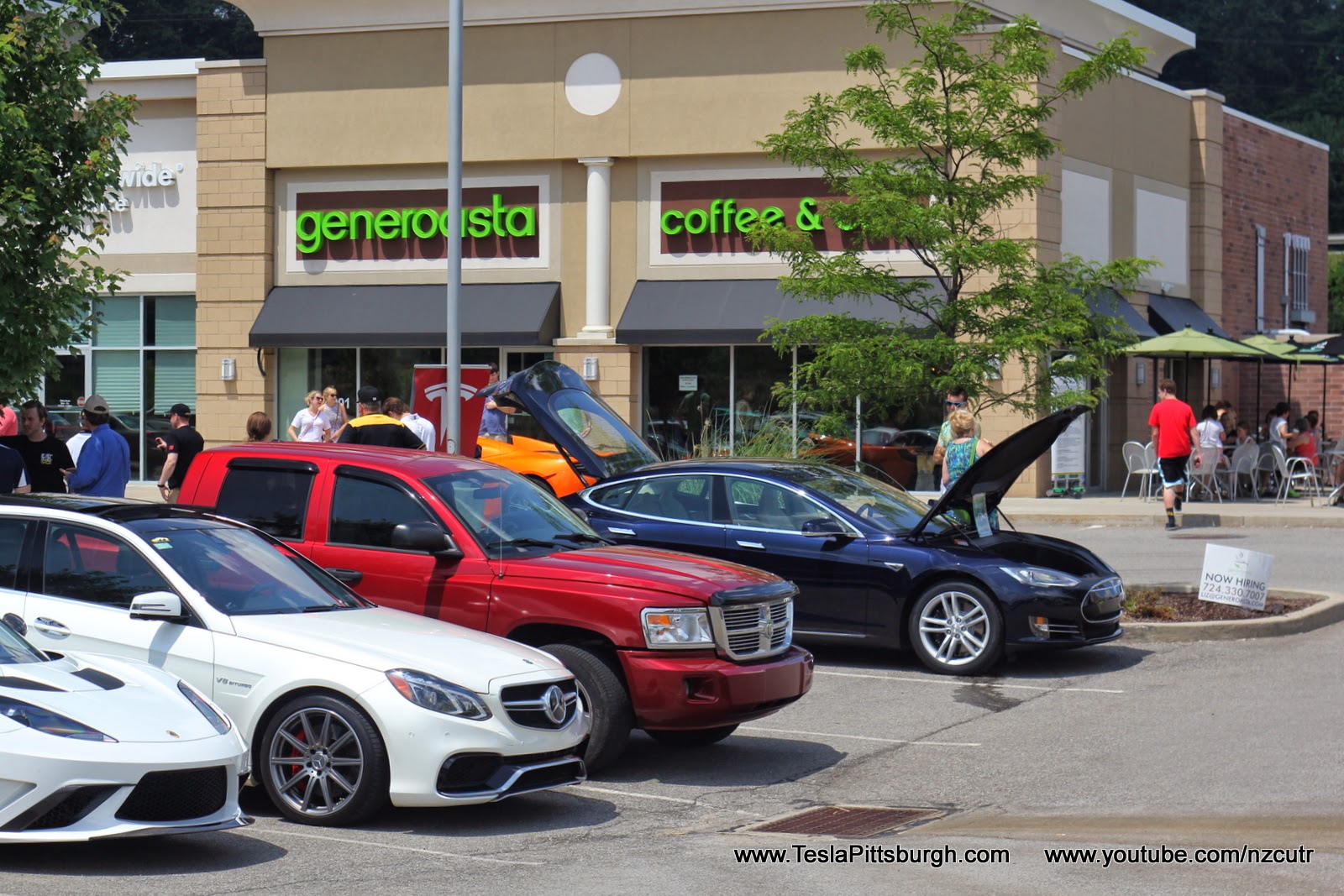 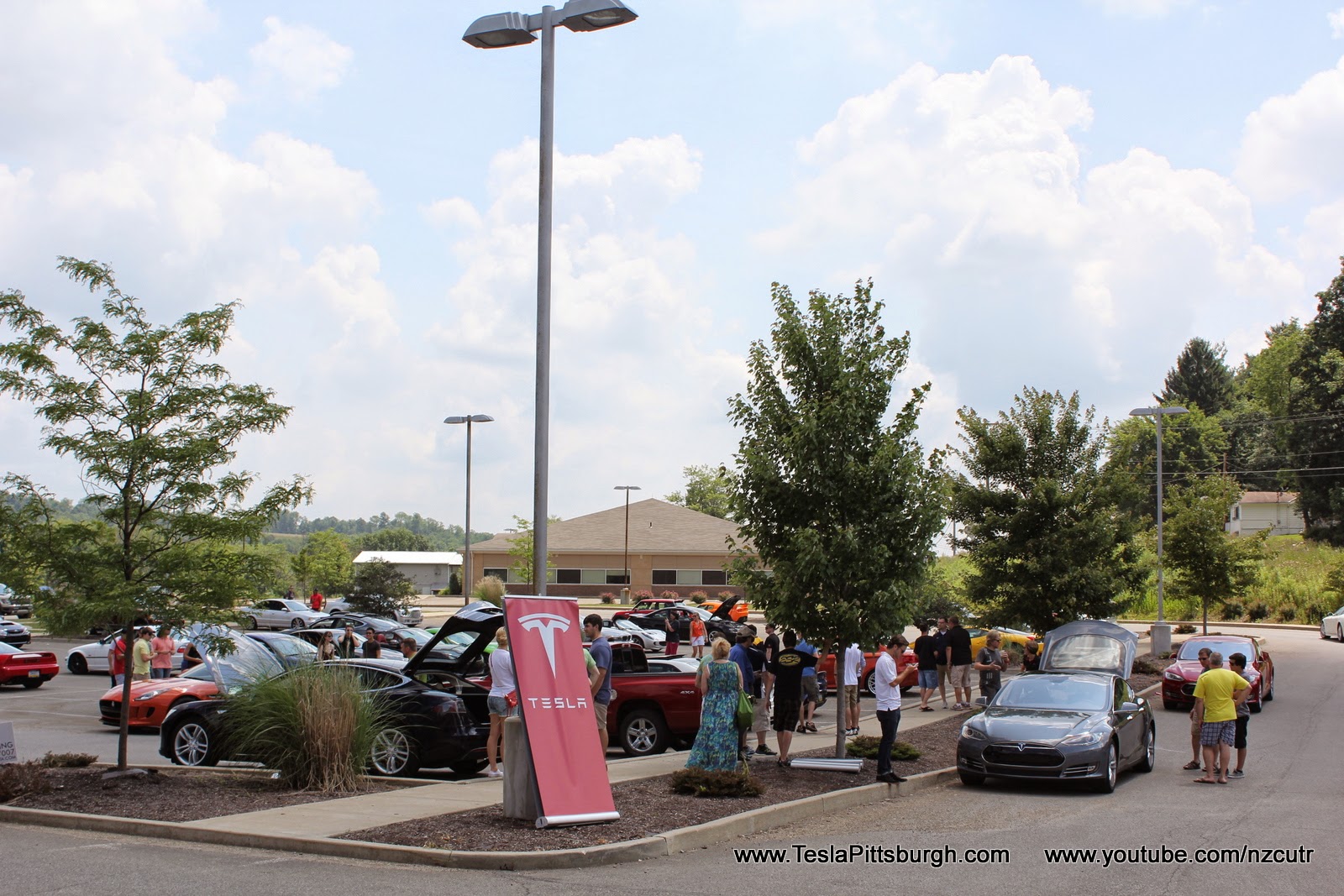 The black P85 was gone most of the time.  I think the C&C crowd probably prefers the P over the S.
Just a guess. 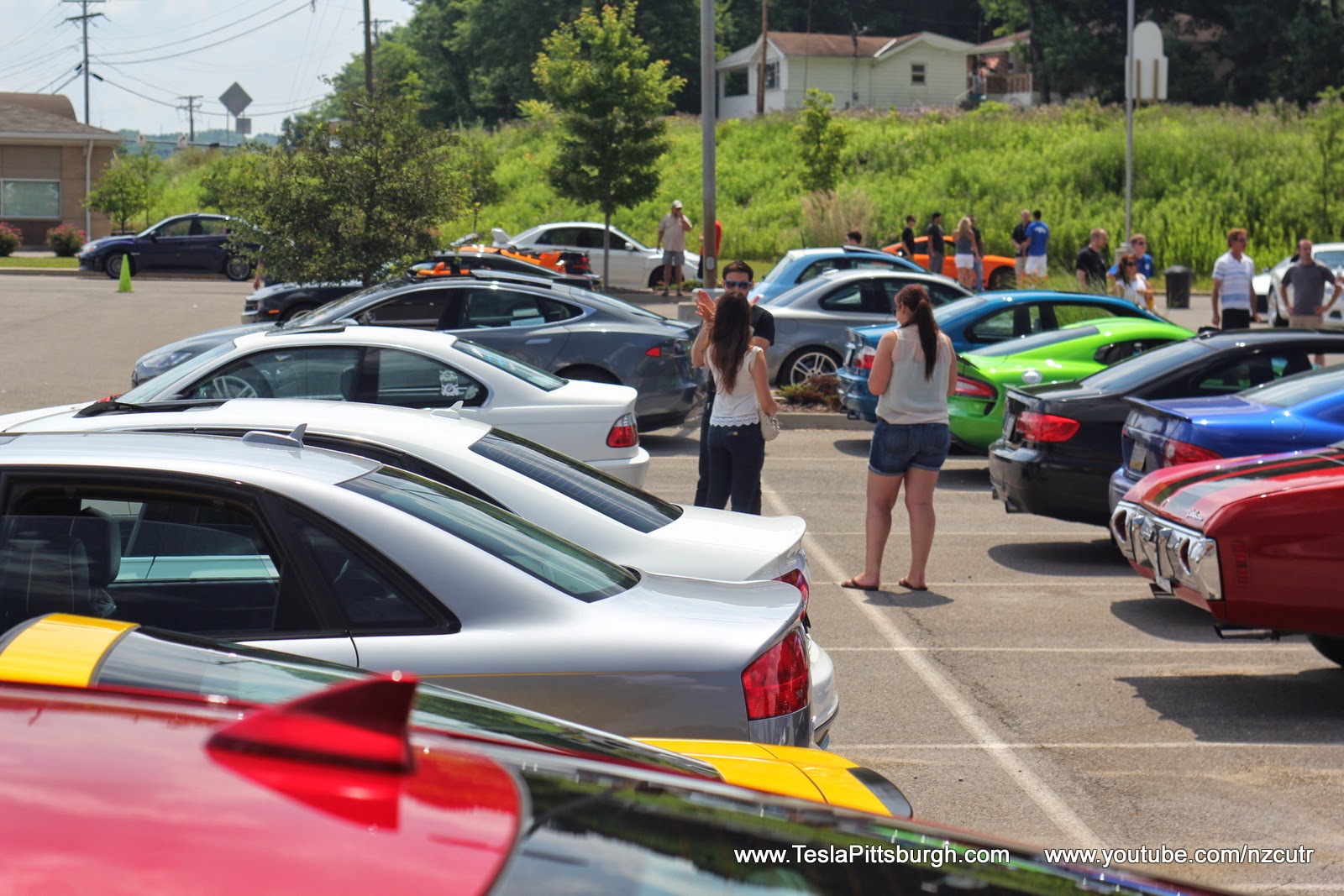 Here's Serena tucked away in her usual section-- well, if twice makes it "usual".  Funny story-- while doctoring my iced coffee from Generoasta, two older men were talking behind me about the Teslas on hand.  He mentioned how they didn't look like "$100k cars" (which most of them aren't) and how he'd only drive it around town and never road trip with it (though I'd just come back from a 1200 mile trip and many have gone much much farther).  His colleague seemed to agree with his analysis and I considered butting into their conversation but, in the end, decided not to.

For them the cost/benefit equation just won't ever be compelling as the bulk of their driving years are past them.  They are probably retired (or nearly) so commuting expenses aren't a concern and long distance travel is likely done by airliner.   I thought they were pretty dismissive but then a big chunk of the gearhead community doesn't "get" electric vehicles and never will.   I would have been with them... but then I felt that WHOOSH of acceleration and will never miss an exhaust note again!  Even if I didn't have years of commuting ahead of me, I'd buy it all over again because there just isn't anything else like it...  the effortless acceleration (especially uphill!) is just addictive. 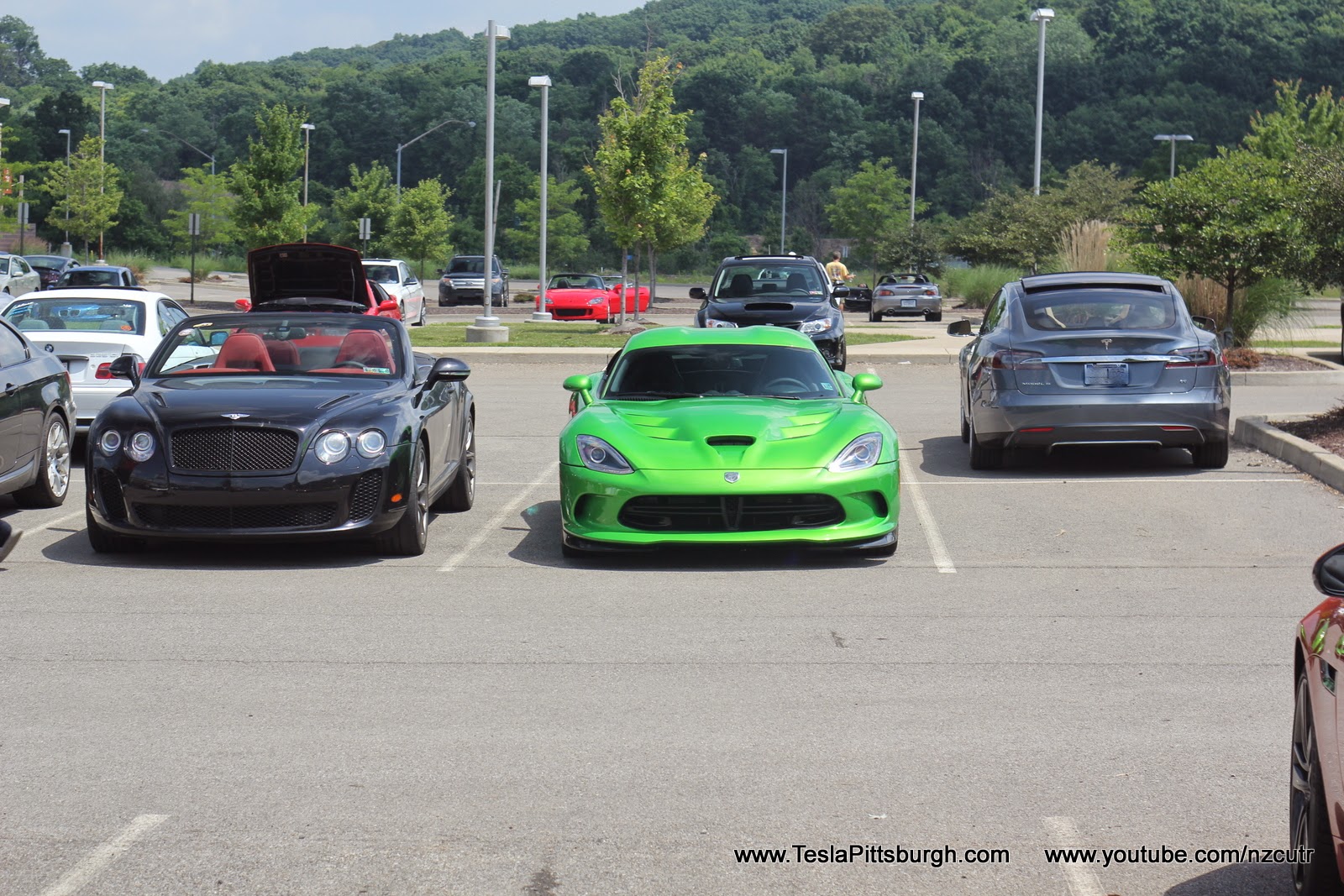 We have a vanity plate on order-- which I'll probably not blur on here when we get it-- but it didn't make it in time for the road trip OR this weekend.  In fact, as of now we still are waiting for it.  Stay tuned... 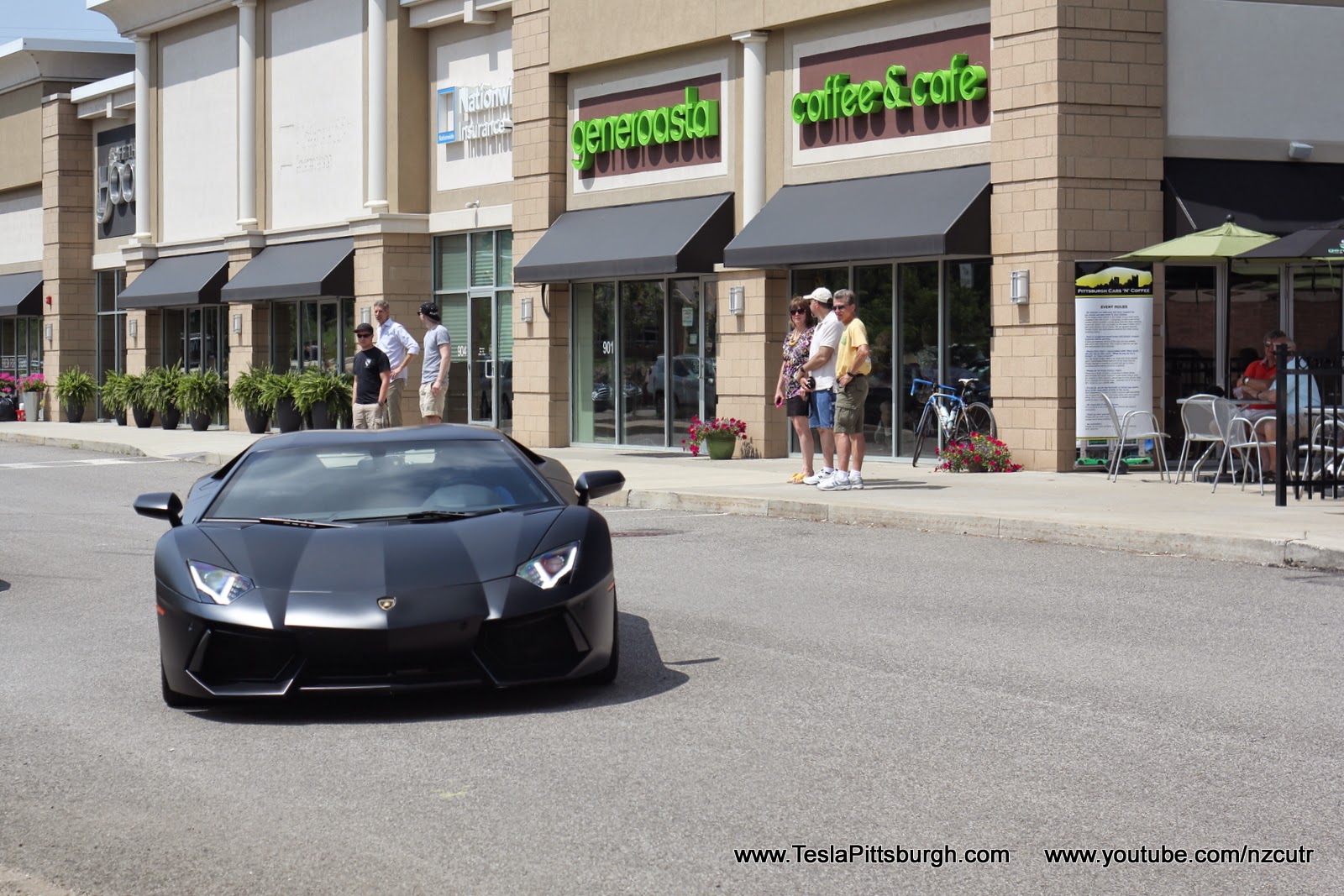 The matte black Lamborghini Aventador was one of the most popular cars that day.  It had crowds around it the whole time.   Supposedly the matte paint is a $20k+ option!  I think it belonged to Bruce Wayne. 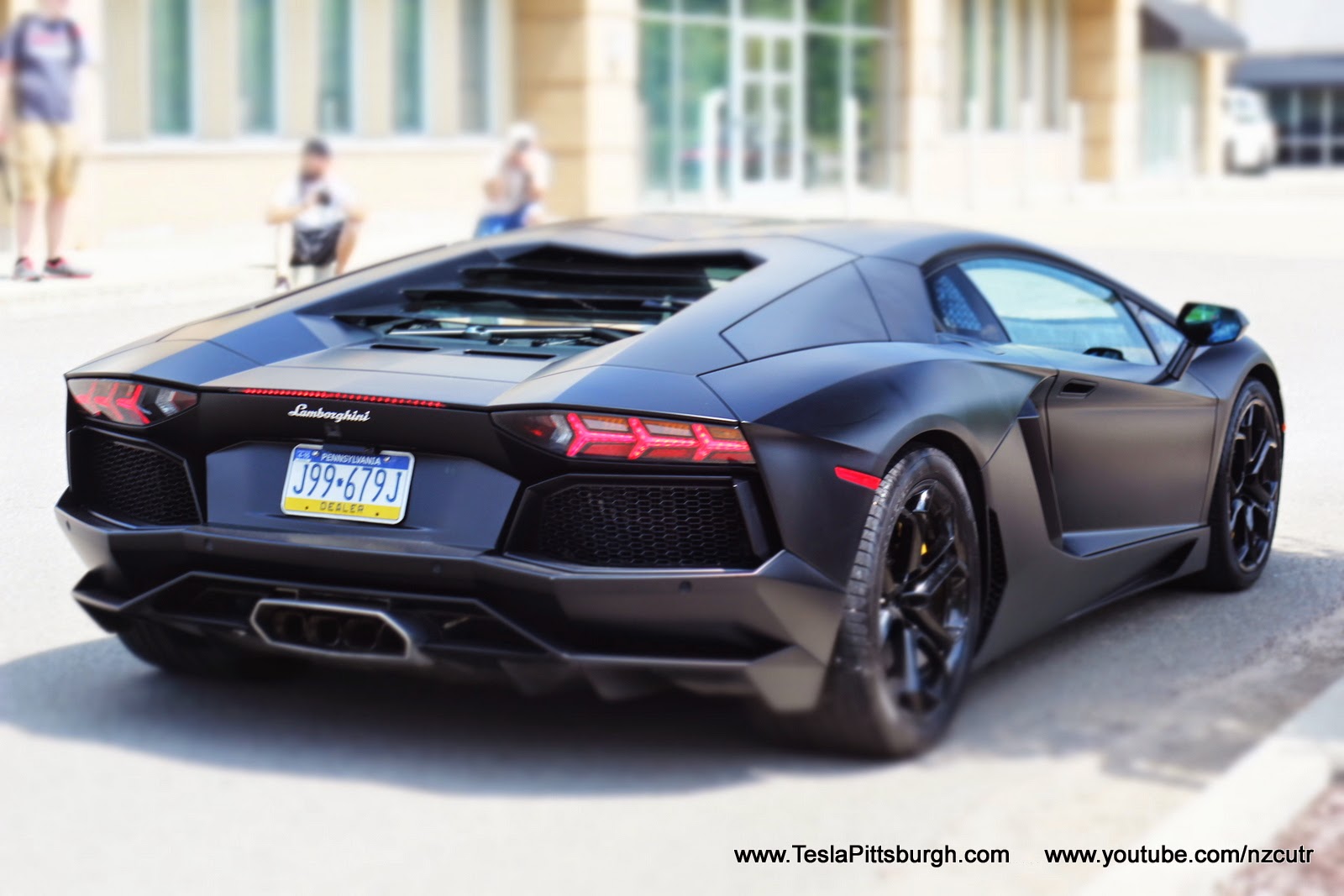 You can't really seem them in this picture but the big brake calipers are bright yellow.  BRIGHT.  If a Pittsburgh Steeler doesn't grab this car up... I'll be disappointed. 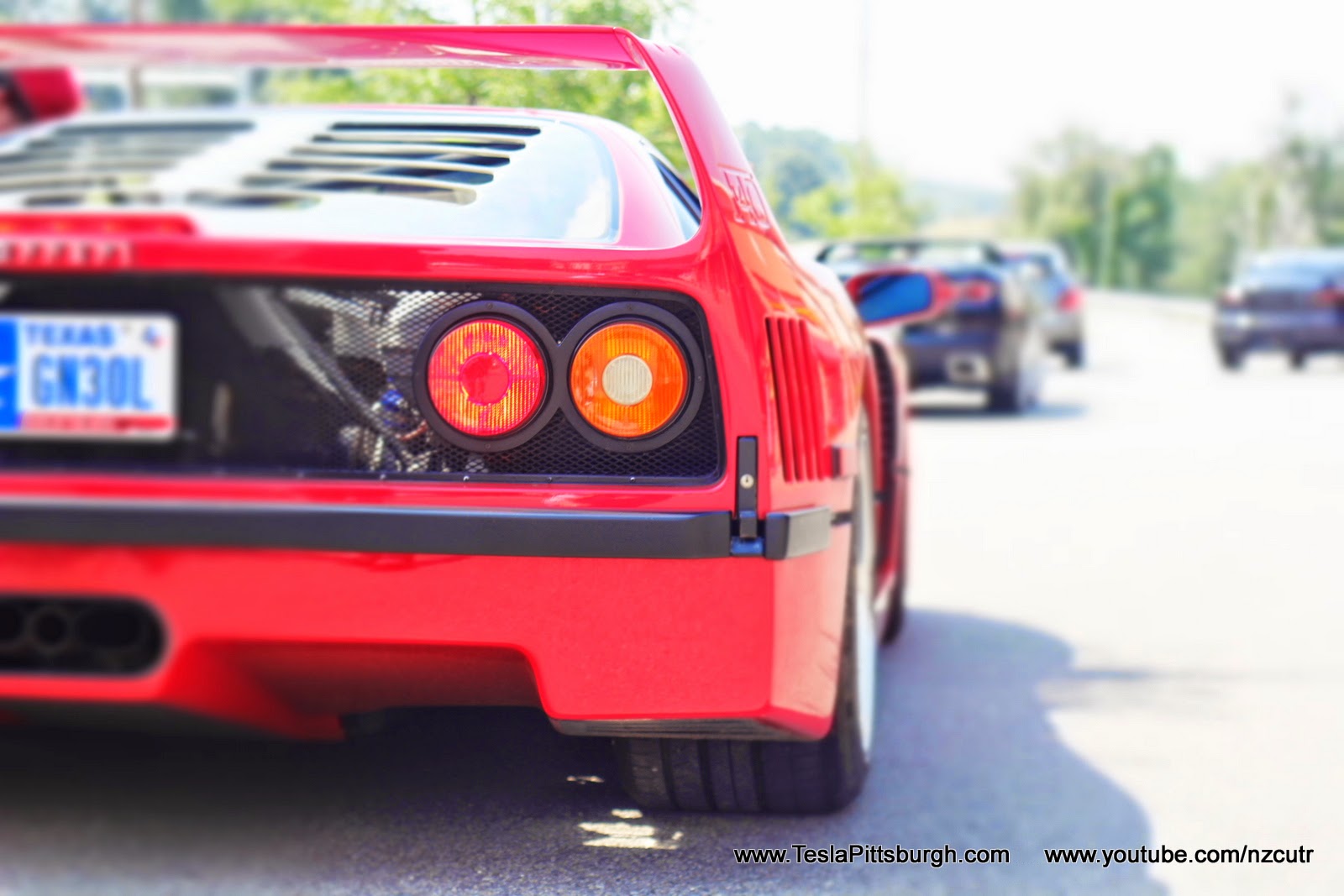 As much attention as the Aventador got, this stunning Ferrari F40 was the belle of the ball for me.  I distinctly remember it going head-to-head with the Porsche 959 when I was kid.  I always kind of preferred the idea of the 959 with its daily driver capabilities and all wheel drive (very rare at the time, especially for a sports car).  The F40 was always the better looking of the two and the brutality of its performance was really alluring despite the lack of civility (no internal door handles!)   Seeing one in person is just a treat for the senses.  It's passion personified in a car, a trait that can't be easily found in modern machinery.  Thanks to whoever the owner is-- I hope you bring this car out every meeting!

Oh right.. Tesla.  Lost my thoughts there just remembering the bellowing wail of the F40.  So how many sales did Tesla make?  I don't know.  I was actually so busy talking to friends, coworkers and admiring the cars that I never got a chance to talk to the Tesla representatives.  I did do a lot of talking about the Tesla though, as I was introduced as an owner several times (and questioned other times) and spent much of my time answering the usual array of "does it really do that?" type questions.  Fresh off our big road trip I was eager and happy to talk about how amazing the technology is (except to those old guys).  And yes, it really DOES that.  Amazing!