After a grueling 6 days in city traffic, we had finally escaped and found ourselves a nice slice of natural beauty.   My relatives live on top of a mountain in Pennsylvania not too far from the Hagerstown, MD Supercharger and-- conveniently enough-- on the way home. 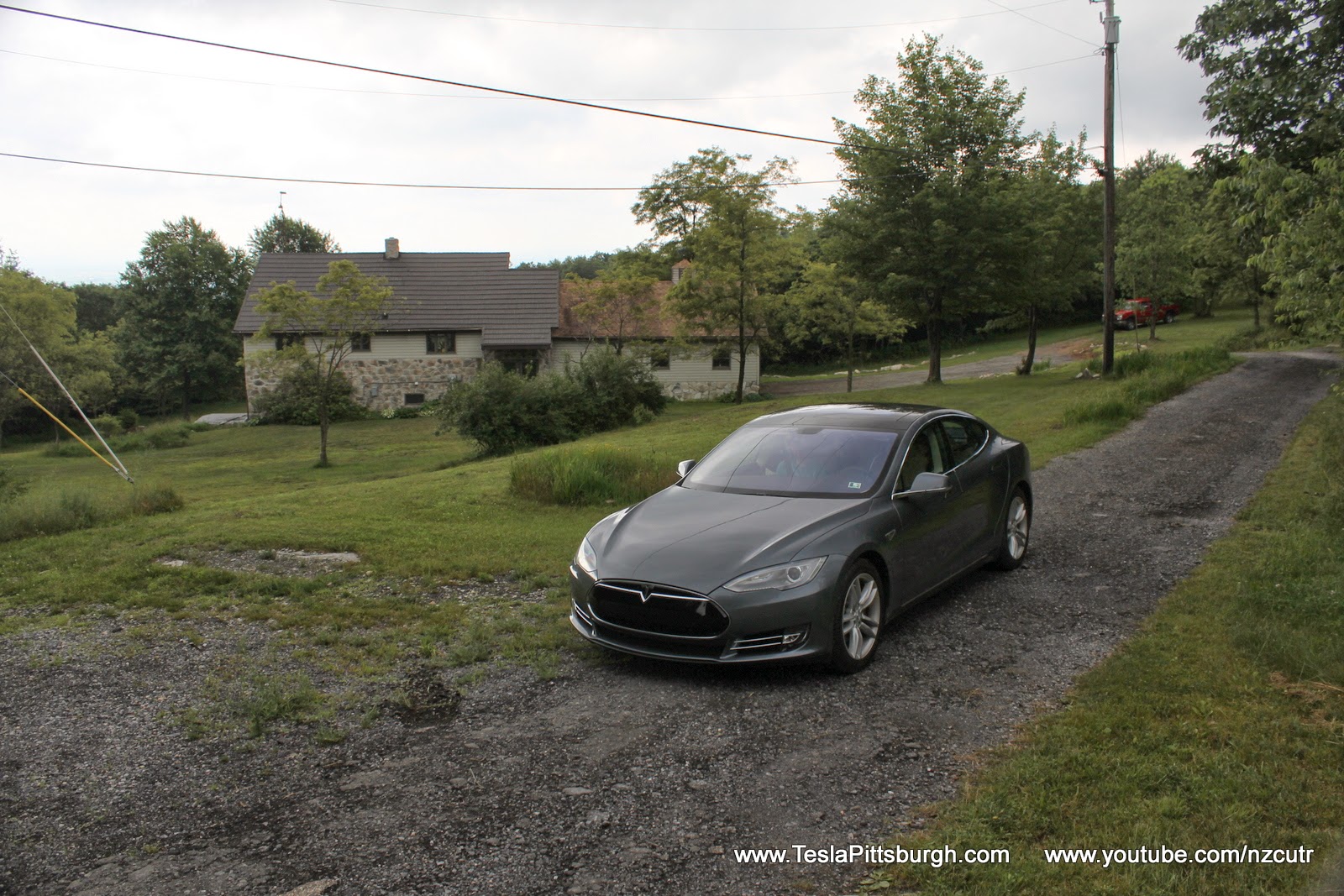 .
Calling them from the road, we were a little concerned to find out that their well pump had died.  That day.   Meaning.... no water.   It's troublesome enough to have house guests dropping by with children in tow, but to have them coming by WITHOUT WATER--- well, what was supposed to be the most relaxing part of the trip was suddenly in jeopardy.

As we approached our last charging stop in Hagerstown we were sending text messages back and forth getting updates.  Originally we'd planned to spend two nights there and another night after camping at a music festival... but our trip was taking its toll and we were already considering a run for home the next day.

We figured we could probably make a night without water if it meant less driving.   Discussions between texts dropped our visit to a single night with a drive home (no camping, no festival) the following morning.  Hiking was still on the agenda, since we were only a few hours from home, but we didn't have a specific trail or park picked out.  We made a quick stop at a KMart and climbed up their mountain with gallons of fresh water as a strange complement to the bottle of wine we'd already planned to give them.

Happily, we arrived to find my uncle working with their back-up well guy.  Water was flowing and I bet our relief was palpable.  I don't think we're very demanding guests but being four people we do use a fair amount of water.   I think one or more of the kids were in dire need of bathing-- but perhaps my memory is wrong on that point.  We talked about our revised plans and did a reconnaissance run down the mountain with my uncle, checking out local trails.   As an added bonus, he had an old 50 amp welder plug that we could charge the car with overnight-- we didn't really NEED the electrons to make home, but it would give us pad enough to detour without worry and blast up and down the mountains.  Eventually our eyelids caught up with our fatigue and we found quiet... peaceful... country sleep. 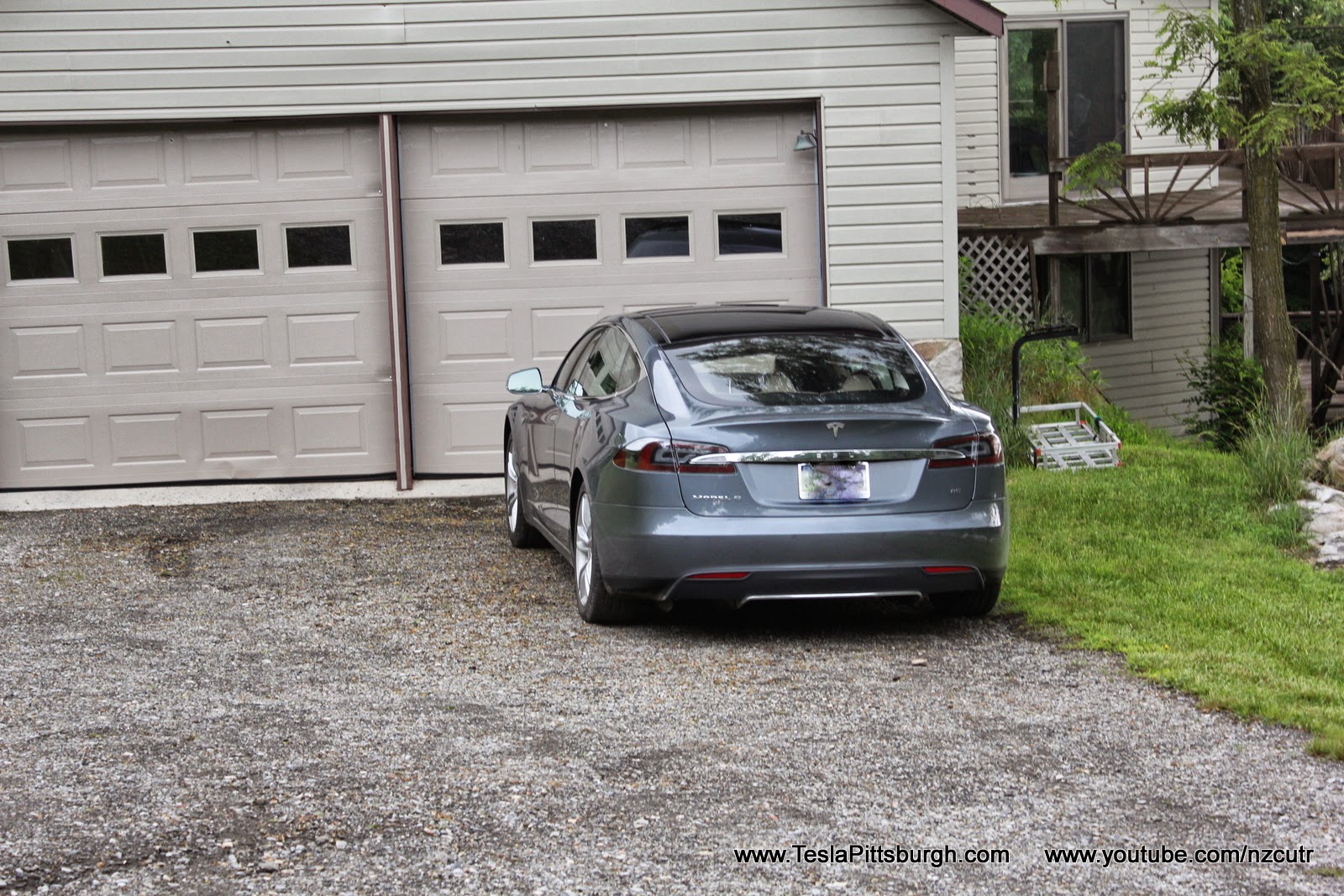 As it turned out, my aunt was having a medical procedure the next day anyway and while it wasn't serious it did make us feel that our one-night stay was for the best.  We bid them farewell and headed out.  Sitting on the summit of the mountain (alongside Route 30) we pondered our options.   Since we were not staying there a second night we were free to hike/visit any park between there and home.  Knowing we might be back for a multi-night visit someday, we decided to "save" the local trails for when we were staying local.

The next major park towards home was Shawnee State Park.  Using the Tesla's onboard web browser we searched the website for information about that park and another one nearby.  Combined with information from the map on the navigation screen, we decided that Shawnee fit our plans perfectly with a nice loop trail that went around the sizable lake the park encircled.  Also, since the entrance to the park was also on Route 30 (which was right out our windshield) we decided we'd just follow it instead of the boring Turnpike.   It would be one of the best decisions we would make on this trip! 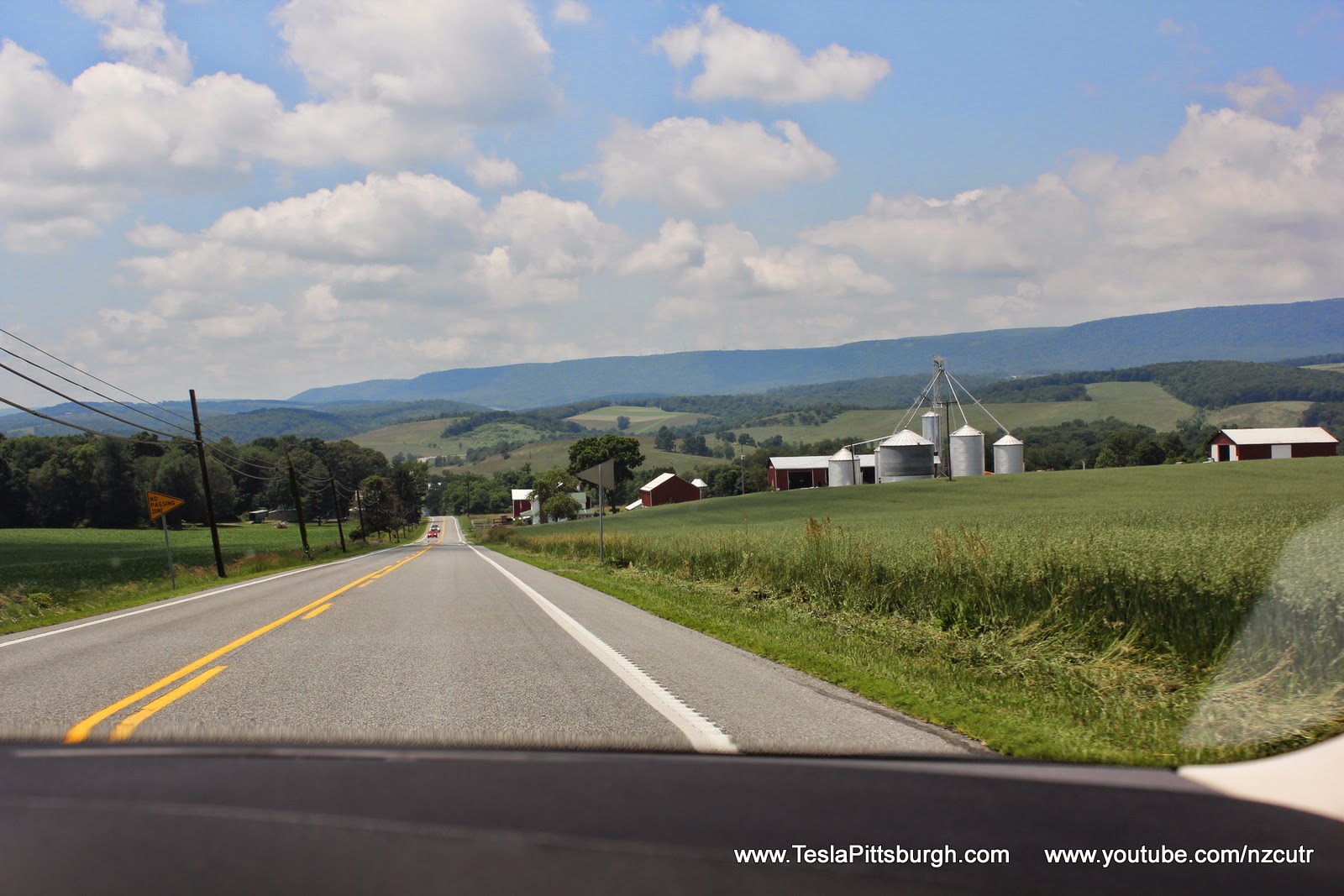 Route 30 is also known as the old Lincoln Highway and is very scenic.  The Turnpike has become the route of choice for most travelers-- including us, as we've driven past here dozens of times, never thinking of leaving the toll road-- but sometimes the road less traveled really does make all the difference.  At the end of this post there will be a link that details the chunk of Turnpike we bypassed in case you are impatient or planning to pass by soon-- it was so rich with detours and photo opportunities that this one day's drive will take several posts for me to share.  Basically, we would be staying on Route 30 from Bedford, PA to Somerset, PA where we planned to stop for lunch while using the Supercharger there. 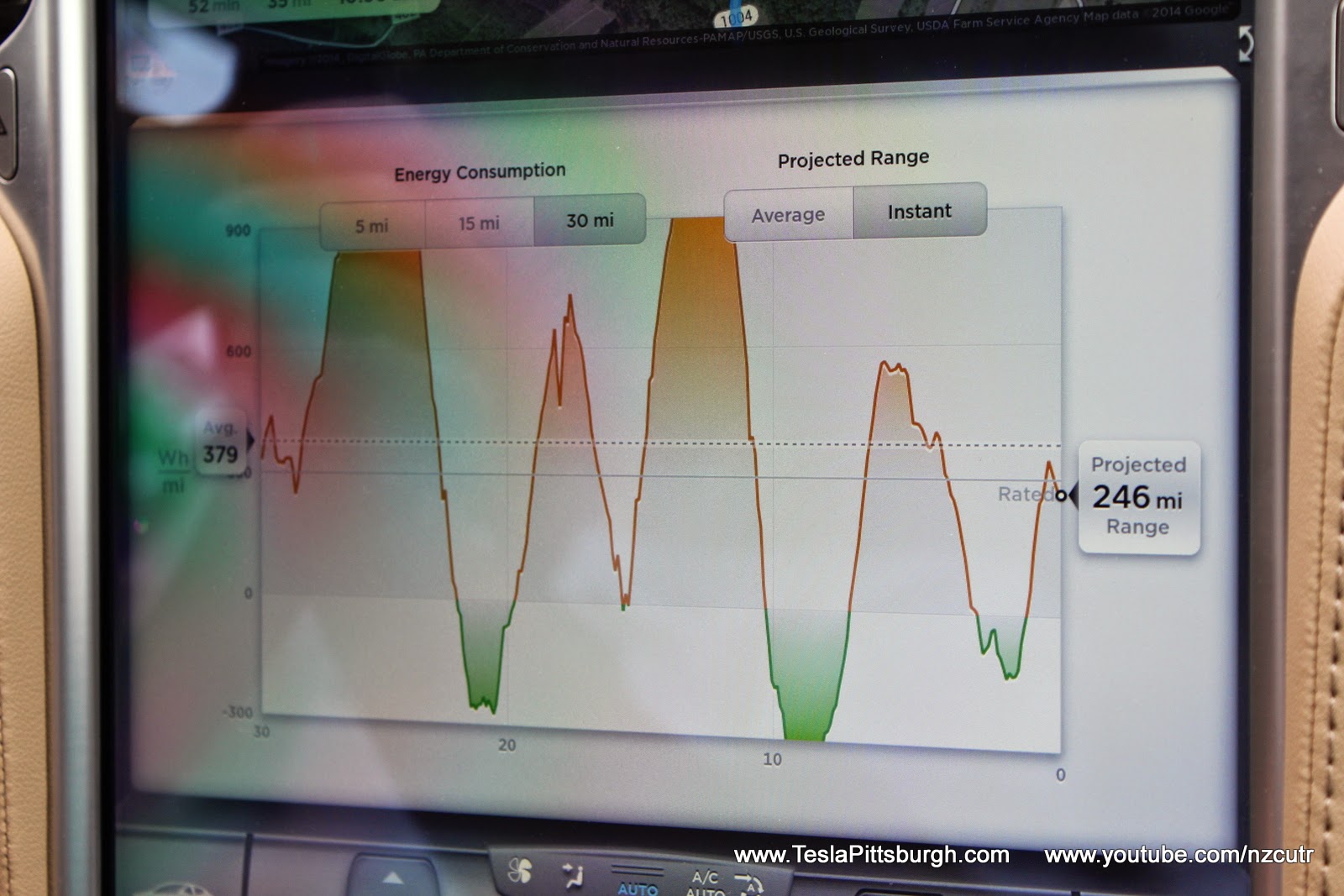 The farm land as we left my relatives' house was rolling and beautiful.  The mountains and hills aren't the Alps or anything, but they are significantly bigger changes in elevation than I would want to bike up!  We were all seeing Pennsylvania with new eyes-- rediscovering the beauty that we've literally been driving past for years...  The Turnpike, you see, follows sort of a man-made valley and sets of tunnels and you really don't see much around you.  Route 30, by contrast, climbs up and down the mountains and sweeps through some of the most fertile parts of the state.   You can see the power output and regeneration on Serena's energy display above-- it was quite a lot of fun.  If you haven't toured hilly terrain in a Tesla.... then you haven't properly toured hilly terrain!  Whooshing UPHILL in silence is hilariously fun. 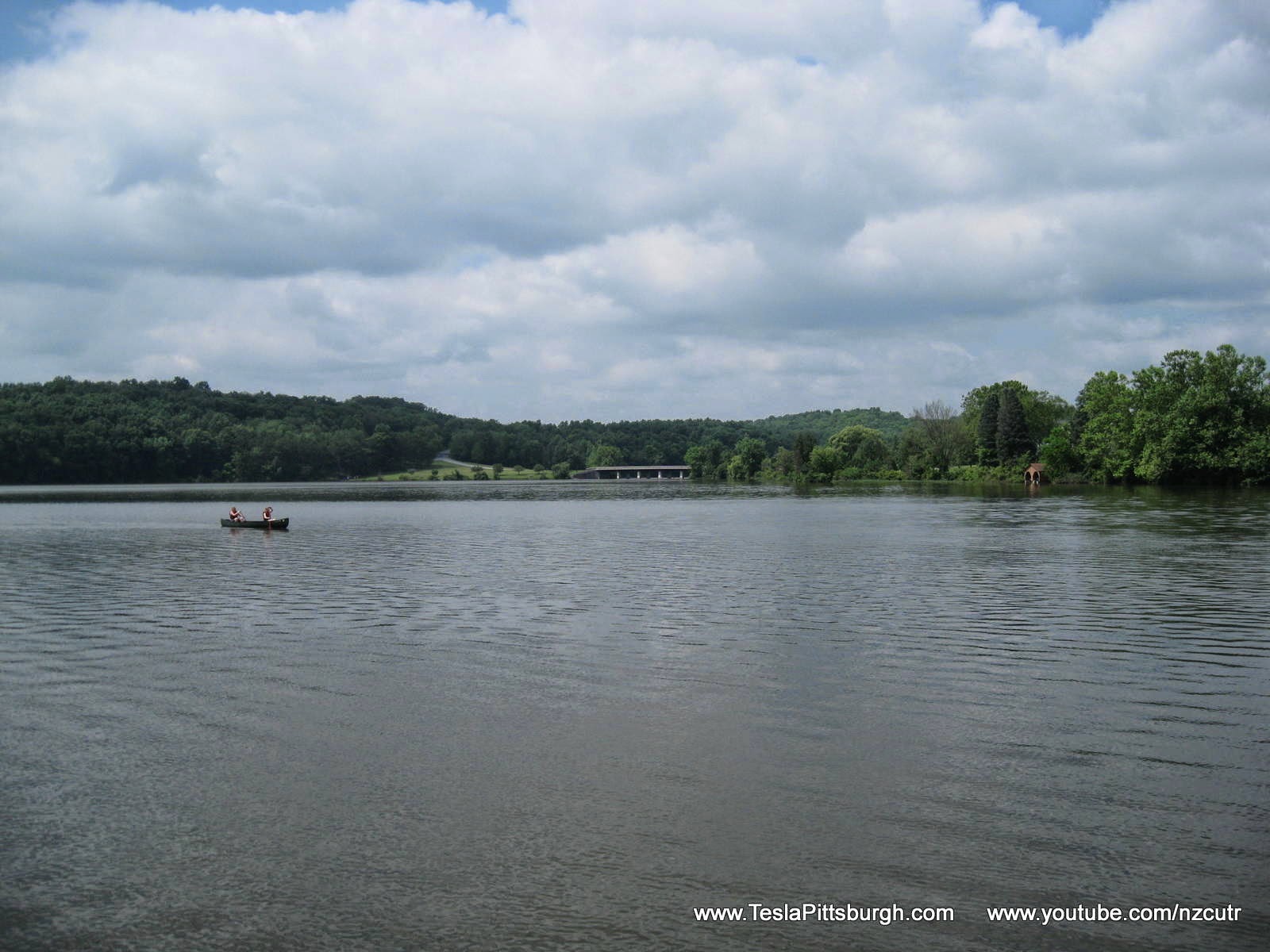 Shawnee State Park turned out to be even more spectacular than we could have imagined.  It might very well BE the perfect Pennsylvania park-- and we've been to many!  The lake is larger than we'd thought it would be and is limited to non-motorized boats so it is super quiet and peaceful.  I think you can troll around electrically if you have weak arms but, as we know, electrical propulsion is the very definition of serene travel.  Wink, wink, nudge, nudge. 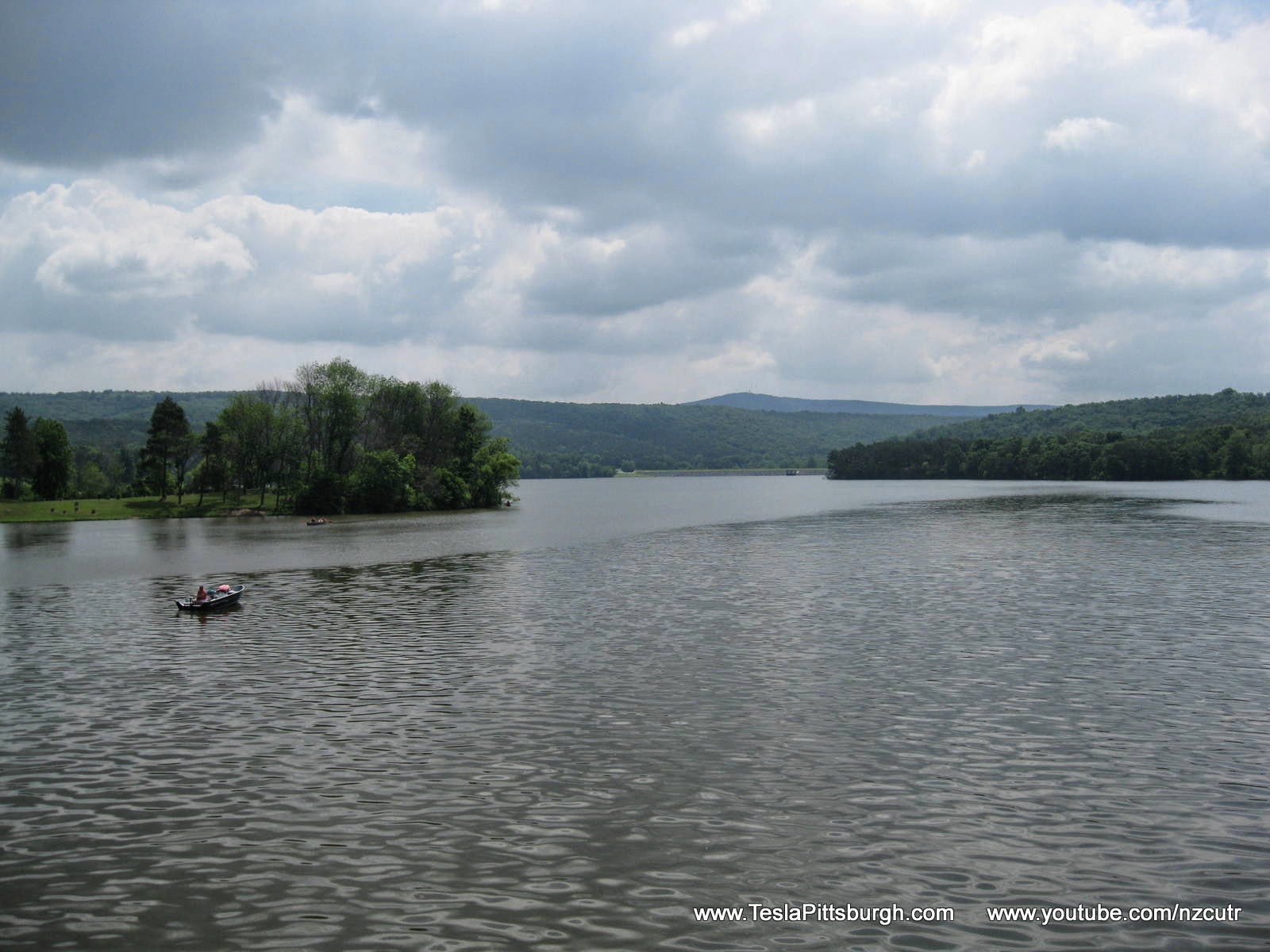 There is really a little bit of everything for everyone at Shawnee except, on this lazy Summer day, other people.  The park was nearly deserted.  The large sand beach sat unspoiled by coolers and blankets, only a handful of canoes could be seen (we assumed a Summer camp group of some kind based on the bus in the parking lot), we passed only about 5 people during our hike (including one fellow dressed in a suit-- apparently also enjoying the detour) and the huge campground was so empty a suspicious Park Ranger tailed us for a while as we scoped out sites for a future return visit.  I guess he was concerned the owners of a Tesla would plunder a vacant campsite for free canned goods?   Really?? 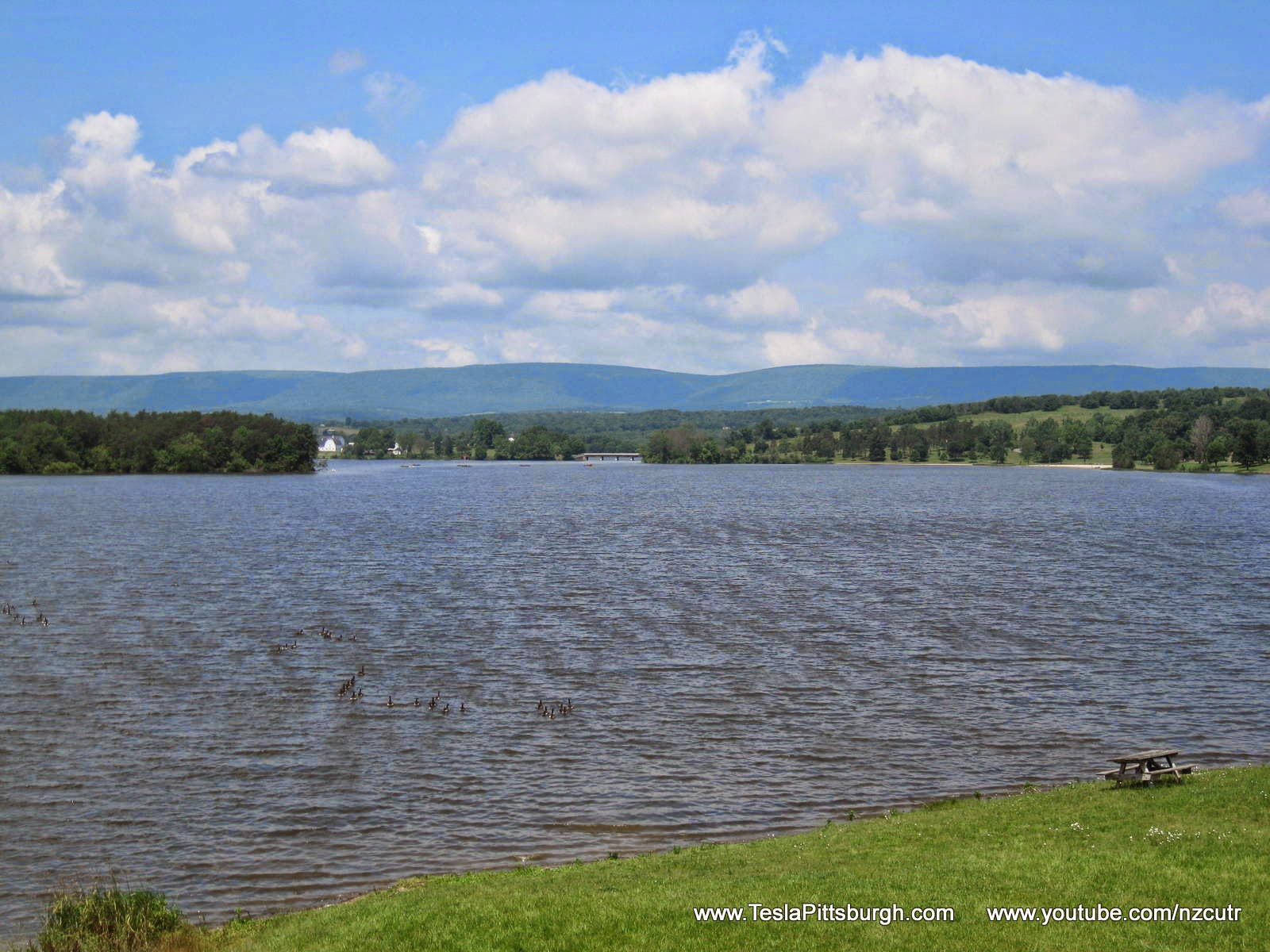 The loop trail that surrounds the lake is a really easy hike for all ages.  According to the park website, the trail is 3.4 miles.   We deviated slightly because of where we parked but even so, I doubt we went more than 4 miles.  It is nearly flat and rarely goes out of sight of the water's edge.  It's wide enough for easy conversation and also completely made with crushed gravel and/or asphalt (closer to the beach end) and would be great for bikes or strollers.  Really, it is absolutely ideal for stretching the legs without dramatically impacting your travel time.  You must try it! 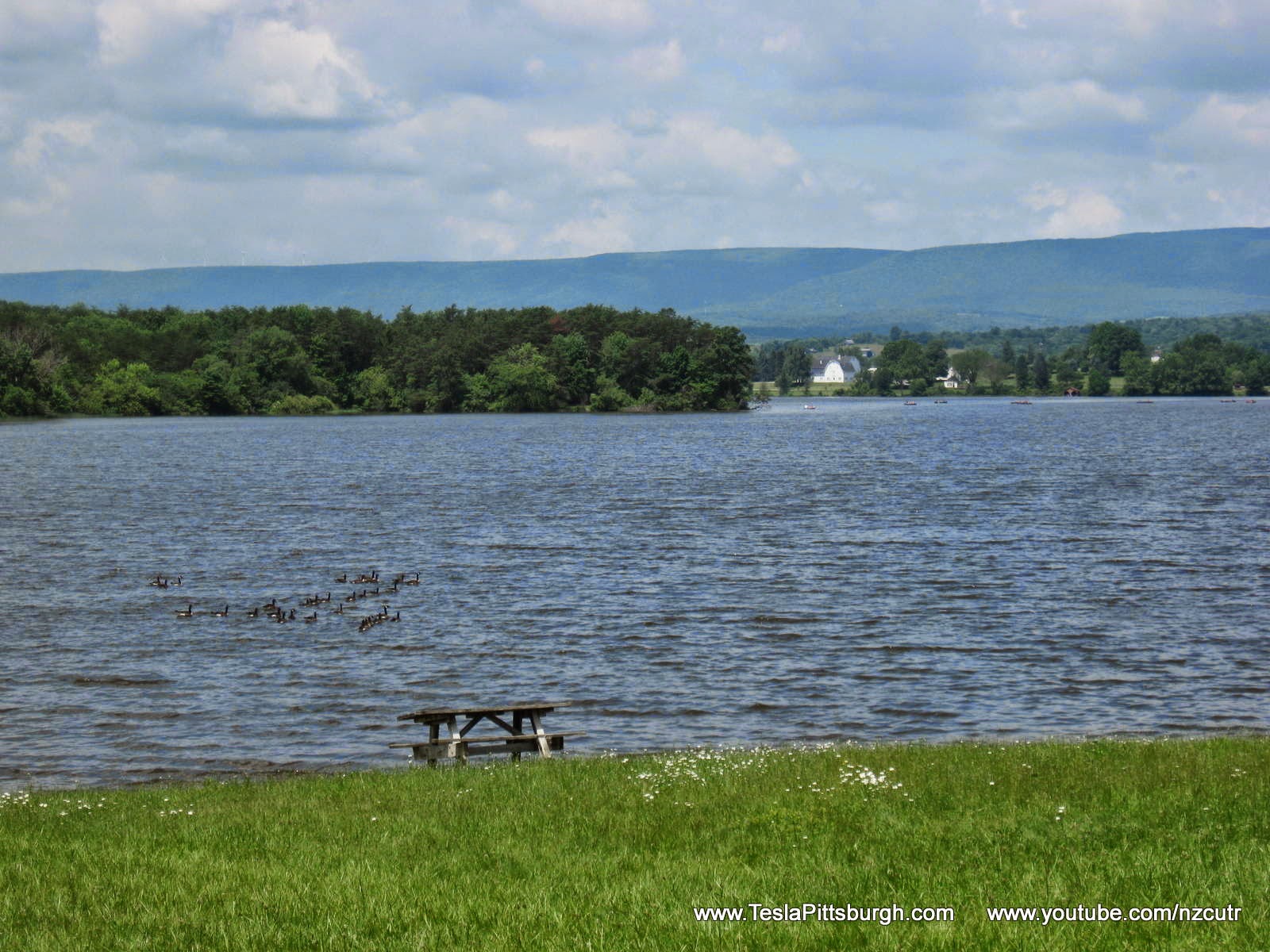 Watching the big clouds We kept joking to each other that the scenery was so idealized and lush that surely Heaven must have been the pattern for this park?!  Okay, not ALL of Heaven-- I'd expect majestic mountains, stunning coastlines and dramatic desert rock formations too-- but I bet there's a special section for Pennsylvanians to "retire" to.  Maybe it was that we were there on a Thursday... or maybe it's just the park's fortuitous location "just far enough" from major cities...   but there was such peacefulness and solitude there, that it might just be the best park we've ever been to.   Please visit, but don't tell TOO many people.  Shh!

Returning to the car, we had a quick snack and, checking the navigation screen, decided to stay on Route 30 and head towards the Flight 93 Memorial.  I had wanted to go there for years, as I'll explain later, but we were completely surprised by the sights we'd stumble across on the way there.

Click HERE to read about the road trip from the beginning.
Click HERE for Part 6: Barn Finds.