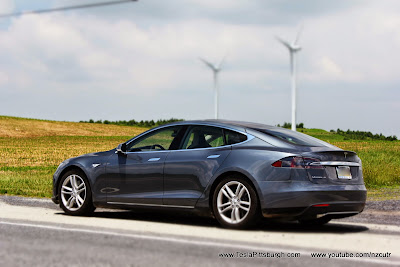 Our Tesla had been sodomized by a Honda minivan, found to be dissolving deep under the bumper and delayed because of wrong parts sent from the factory while we swigged gas in The Gangster... But finally the call came: she was ready.  It was time to get our Serena back.

Look again at the top picture.  If you look closely at the rear bumper, you'll note that it doesn't quite match the color of the car.  That picture was taken about a month after it was delivered. 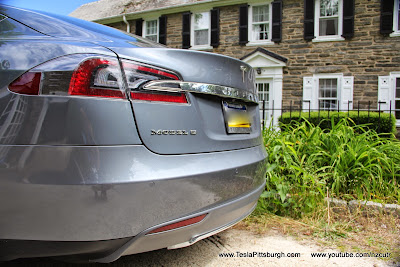 Lest you think it doesn't match due to some editing effect, here's another picture taken from our first road trip in June of 2014.  The only processing that picture has to blur the original license plate, but the bumper is CLEARLY not a great color match to the body. 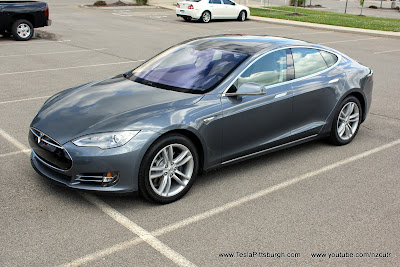 In fact, the front bumper was never a great color match either.  Perhaps if my delivery experience hadn't been in the Home Depot parking lot, I would have made a bigger fuss about that, but my car didn't see a service center until it was nearly a year old.  By then, well, I'd come to live with the subtle mismatch-- which I'd also seen on other Teslas.  It's also very light-dependent as the paint has a lot of "travel" and sometimes it appears to match perfectly and sometimes the bumpers look way off.

And I'm not alone in this-- you can see it other "Old Grey" cars like the one above, which was delivered to a Massachusetts owner about a month before mine. Besides, if Han Solo can have a lighter colored bumper, who am I to complain? 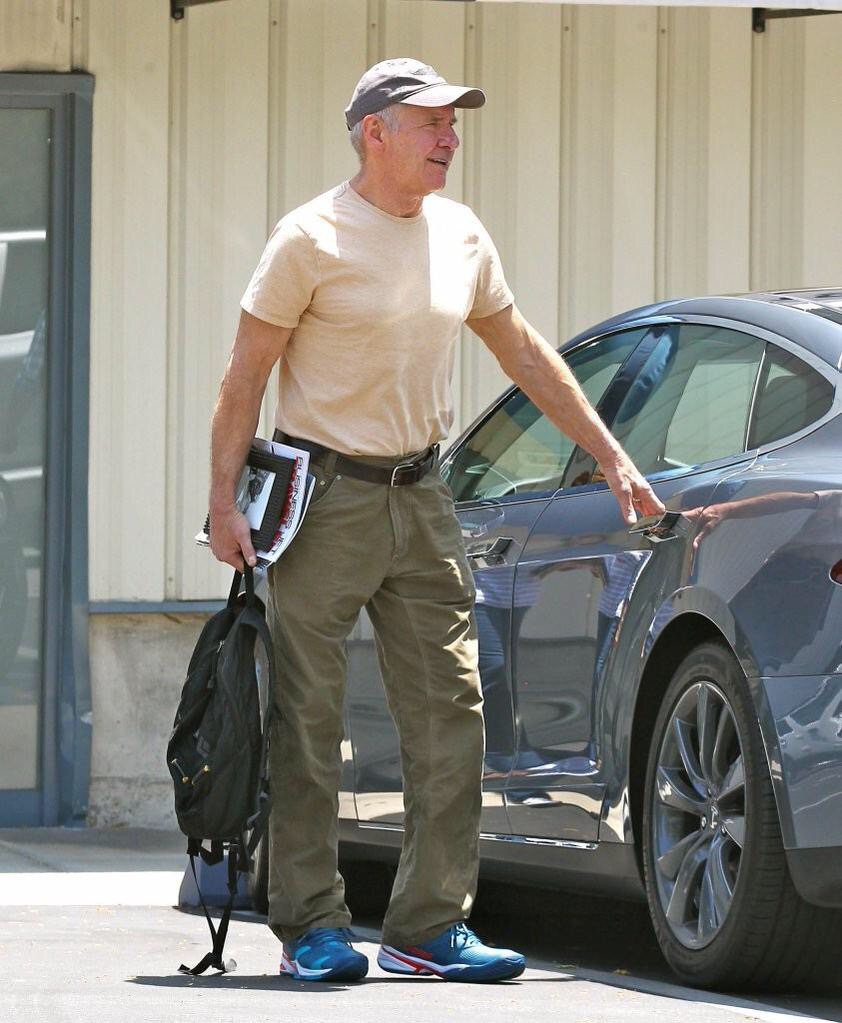 I have a theory/suspicion that Tesla may have changed to the newer, darker "Midnight Silver" grey in part because matching the old grey from part to part, panel to panel, was so difficult.  The new "Midnight Silver" doesn't have near the travel or color range that the old grey does, so it's probably easier to keep consistent.

So when Body by Cochran called to confirm my car was ready for pickup, I was not surprised to hear there was another delay.  I was also not overly surprised when they said it was because they were unsatisfied with the paint color match when they reassembled it and they were going to respray the paint and that would take an additional day.

When I picked up the car, the paint looked to be a dead-on match -- much better than the factory.
And I sometimes still think that, but it's very dependent on how the light catches it. The flakes have to align just right with the angle of the light and the viewer and BAM, perfect: 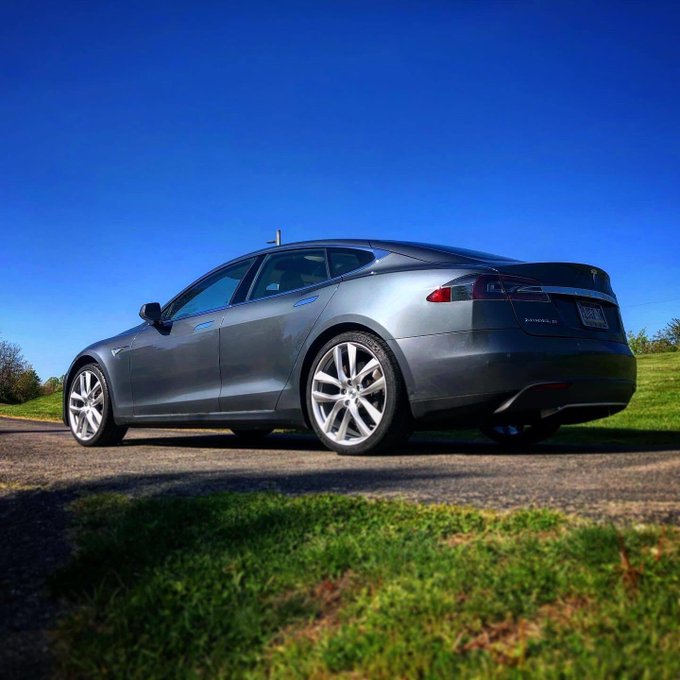 Even in the shade the new bumper sometime seems to be a great match. So I immediately took the car over to the detailer and had a new piece of Xpel paint protection film applied to the bumper and then a topcoat of ceramic--  locking in the repair, for all practical purposes. 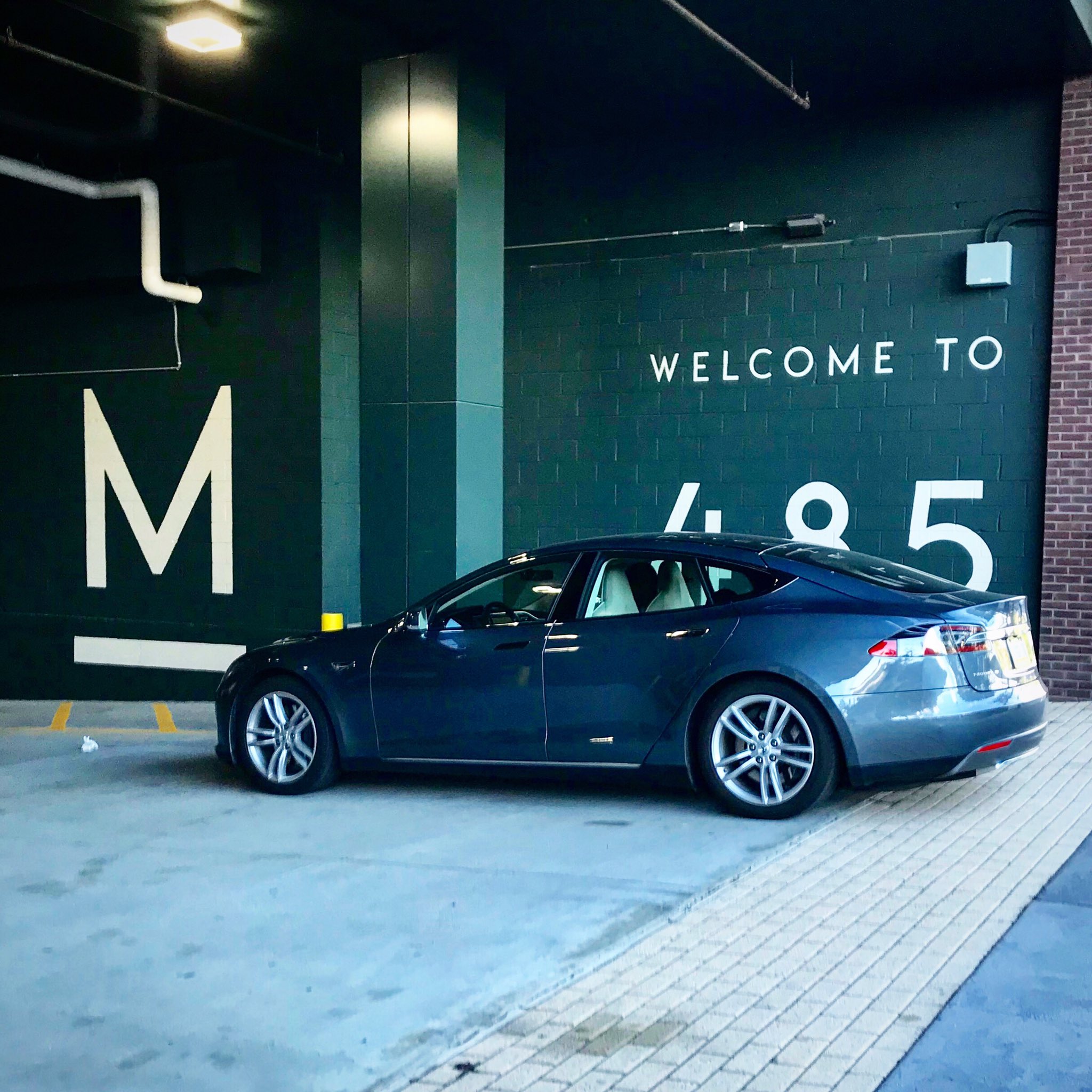 HOWEVER....  As I spent more time with the car... and more lighting conditions...  I began to lean more towards the 10-15% of the time it matches perfectly but most of the time, IT DOESN'T. 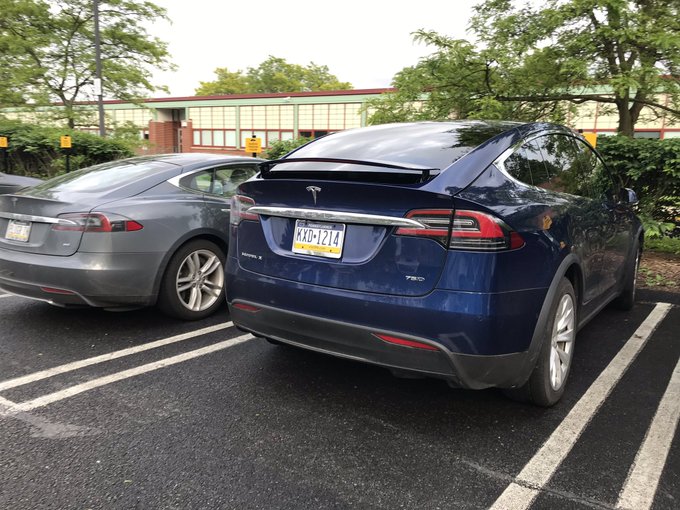 With the Xpel and ceramic applied though, there wasn't much to be done. But I do want to make this known to all of those people who flippantly say that you don't care about replacing parts in accidents that you're not found at fault in. The whole "well if they hit me then I just get a new bumper."
THERE IS NO "JUST."
It is HUGELY inconvenient to get ANY repairs done and there's absolutely no guarantee the car will look right afterwards -- and even if it does at first, it might not over time, as in my case. 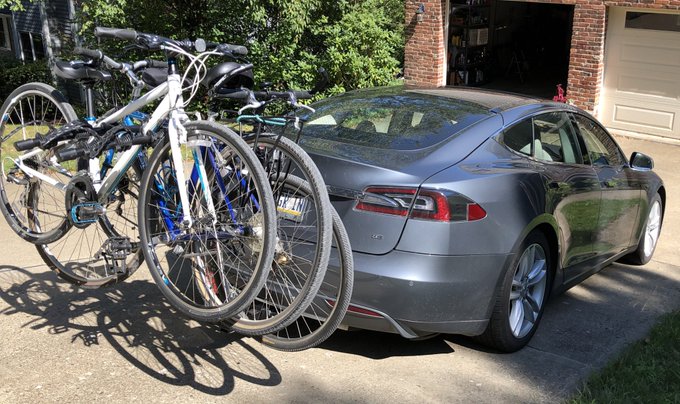 Again, the bodyshop did exceptional quality work and even went so far as to incur the additional day to attempt a respray of the bumper to get a better match...  I think in their estimation and lighting conditions they DID because I agree that it does match better than the factory paint in many instances.
It just also doesn't match in many more instances. Which means I have a 3-shades-of-grey Tesla, the too-light front factory bumper, the metal body of the car and the slightly-off too-dark replacement rear bumper. 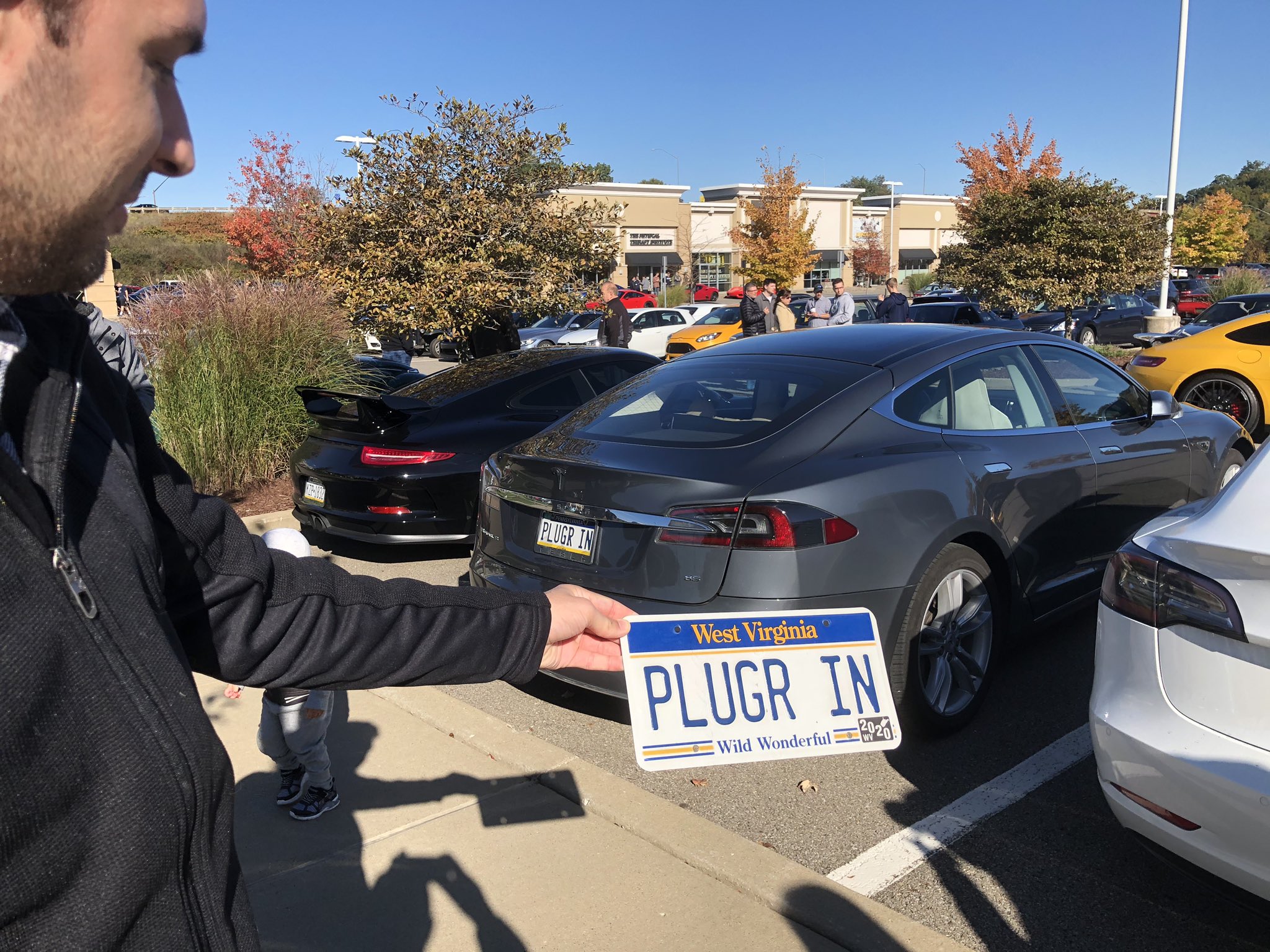 Fortunately, I've found an easy solution to this dilemma.  Don't wash the car. 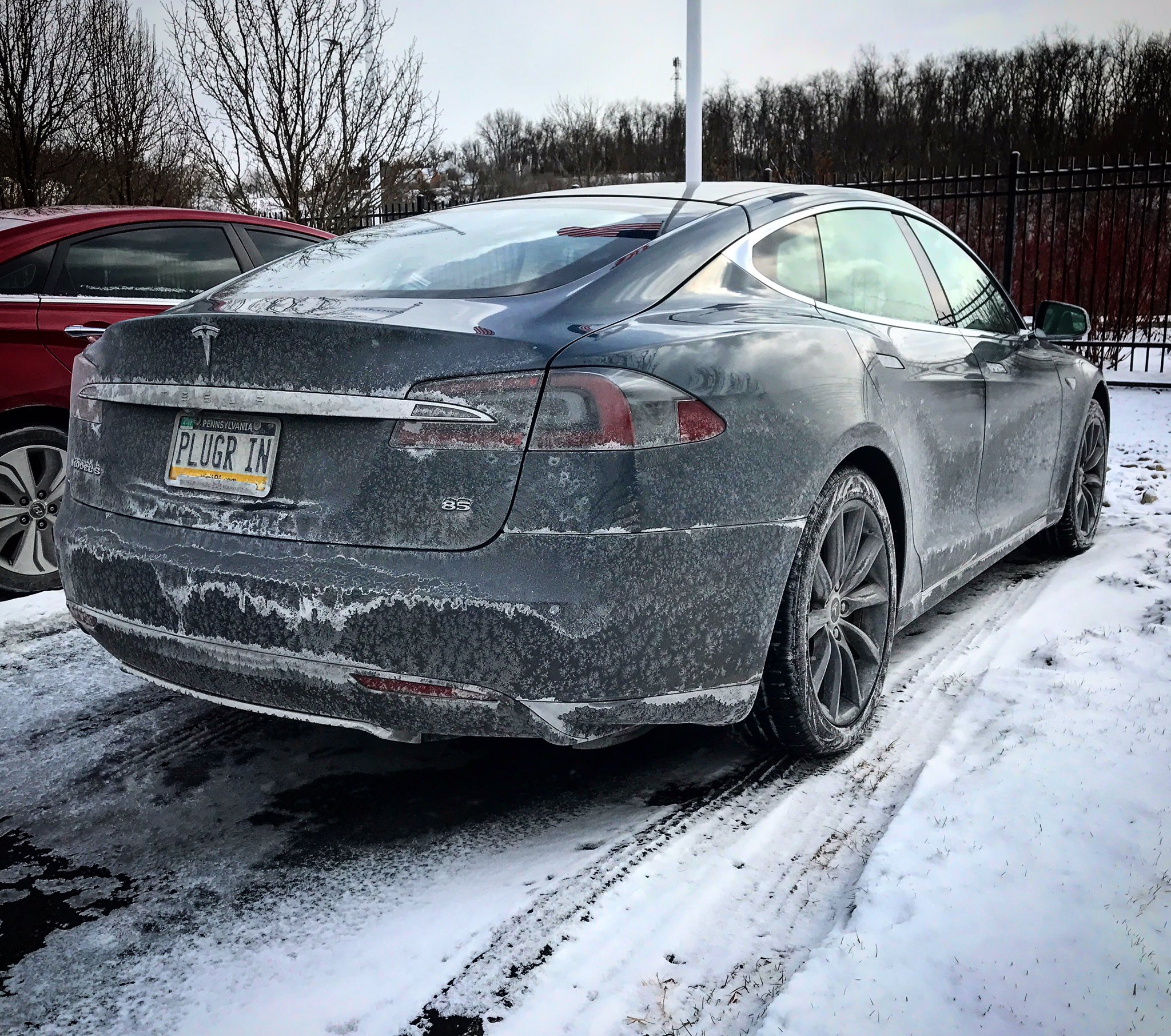 Having said all that--  it was about a year later that I AGAIN found myself going to Cochran for a complete replacement of the driver side rear door and associated respray.
The paint work is so well done on that job that no matter how hard I try, I have not been able to detect where the blending started or stopped. It truly is a remarkable match...  I should have asked them to try again on the bumper while it was there though.  Oh well..
In the meantime the rear bumper has been hit at least twice (minor scuffs, dings at parking lot speeds) so maybe third time will be the charm...  someday.
Thanks for visiting us here! If I've helped you make the leap to #Tesla, please message me so I can answer your questions. Use my personal referral link and you'll also get Free Lifetime Unlimited Supercharging: https://www.tesla.com/referral/matt327
CLICK to read more at www.TeslaPittsburgh.com, check out the videos on our YouTube channel at www.YouTube.com/NZCUTR and follow us on Twitter: https://twitter.com/TeslaPittsburgh.