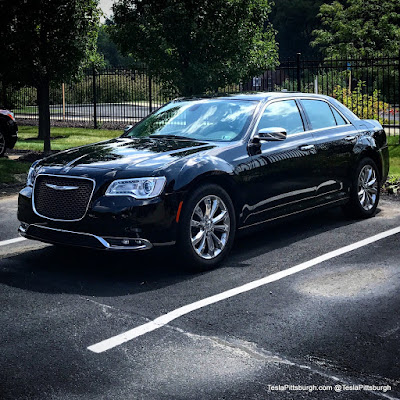 We arrived home from our big road trip and immediately the car shuffling began.  The Hunger Games’ motto “may the odds be ever in your favor” kept rattling through my brain as I scrambled to keep two cars on the road at all times.  Then came The Gangster.
The Tesla was just beginning its circulation around the area as it journeyed around from shop to shop.  The garage was quickly empty of the Chrysler, which went on to nearly drown in the Houston floods from Hurricane Harvey.  The Baja was serviceable as our usual backup vehicle with its-- nothing short of miraculous-- new inspection sticker, but a new “front-line” car was needed. 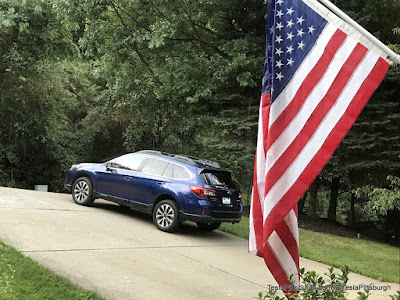 For a variety of reasons I’ll explain later, we quickly narrowed the search down to a 2015 Subaru Outback 3.6R, fully loaded with Eyesight (an impressive pseudo-Autopilot).  I never thought my next car wouldn’t be another Tesla, but strategically the Outback makes more sense.  I eventually found one in Virginia, a quick road trip away.  You'll want to see the transformation it had in the hands of a good detailer.


But I digress… THERE IS Tesla-related content here, just dig in and let me explain: 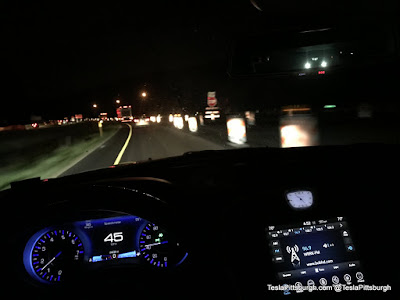 Fortunately, everywhere the Tesla went we had loaners and/or rental cars as replacements, so that helped keep the pressure off the aging Baja.  First stop was for it’s 50,000 mile service (a little early) while we waited for Tesla to ship the collision repair parts to Cochran.  One of the goals of that visit was to replace the headliner.  It had been stained due to a leak in the pano-roof some months earlier… This repair turned out to be such a cascade of bad luck and prior failed repairs, that I'll detail it another time-- but suffice it to say that Tesla made it right in the end. 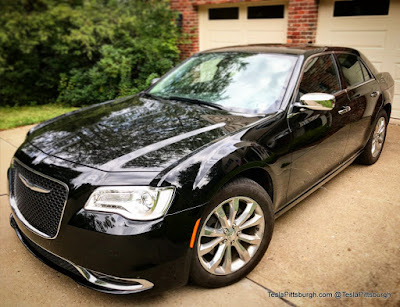 Our Tesla was swapped out for a gratis rental Chrysler 300 (oh no, another one!) and repairs started.  Cochran estimated that the repairs would take about a week, but SURPRISE SURPRISE they ran into complications with the Tesla parts and that delay glued my butt into the Chrysler’s seat for nearly an extra week--  But it gave me the chance to sample a current average American sedan.  Even though the 300 is hardly the head of its class, it should-- in principle-- have Tesla concerned.  So indulge me this two-week "road test" and I promise to loop it back around to Tesla in the end: 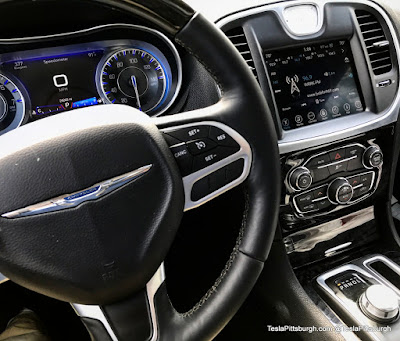 The newer 300 was a big upgrade from our 2001.  In triple black, the rental 300 became known as “The Gangster” during its stay with us and was definitely more intimidating in appearance than the futuristic curves of our grey Serena.  Styling is very subjective, so I won’t critique the Chrysler’s other than to say that I think it’s a reasonably good update on the prior generation, if a little bloated and stunted looking in the rear quarter panel area.  For the price, it is suitably elegant in the traditional ways of American chrome. 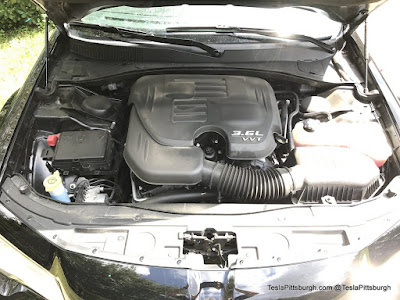 Make no mistake, the drivetrain is horrific to the Tesla in comparison.  My rental had the V-6, which was a updated version of my 2001’s but now rotated longitudinally and placed in a much larger car.  It was comical how much extra space there is in the engine bay.  I know that extra room is for Hemis and SRT versions' big V-8 powerplants, but with the relatively svelte V-6 in place it's like an empty warehouse.  Be forewarned, there is a lot of tempting room for all the neighborhood cats to warm themselves, so you might be hauling more passengers than you think.  The gaping hole of nothingness from the backside of the grill to the radiator was probably half a foot, with another half a foot after that until you contacted the front of the engine.  The gaps on the sides were at least several inches as well.  If you could combine all the empty space into one usable section, you might end up with a bigger frunk than the current S. 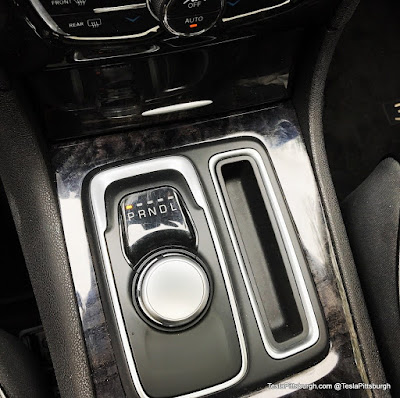 The transmission has a gazillion speeds, but none of them ever seem to match what you or the engine want to do at any particular time. They fight like an old married couple and I found myself just shoving my foot down to encourage it select SOMETHING, by God.  The transmission is also controlled by a round knob on the center console.  I hated that stupid knob.  Even after all my time with the car, I still fumbled around trying to remember if left equaled forward or if right equaled park and reverse.  More than once I’d back out of the driveway and then twist the knob to park instead of drive, lurching the car to a stop in a most undignified manner then revving the engine while other driver cocked their heads impatiently at me. 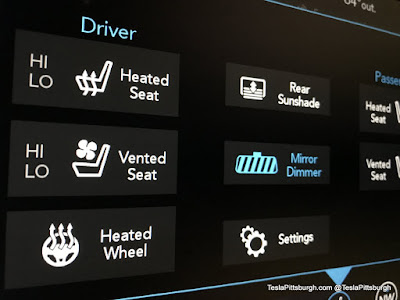 What the Chrysler does right, is the interior and electronics.  The large touchscreen works wonderfully.  It’s intuitive and uncluttered with a fast response-- much better than our Subaru.  Again, no, it’s not a Tesla… but the screen does control most of the car functions with just a few buttons otherwise scattered around for critical functions.  It’s a good overall compromise between a power plant control room and the austere Model 3.  Supplemental buttons hidden on the backside of the steering wheel (just like on my 2001) put more functions-- literally-- right at your fingertips. 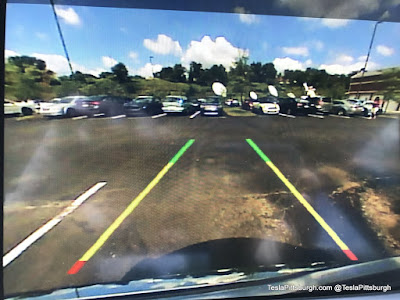 The only failure for the driver is a rear camera that was so blurry Mr. Magoo would feel at home.  On cold mornings it was also completely obscured by the vapors pouring from the car's dual exhausts as you backed through the smokescreen. 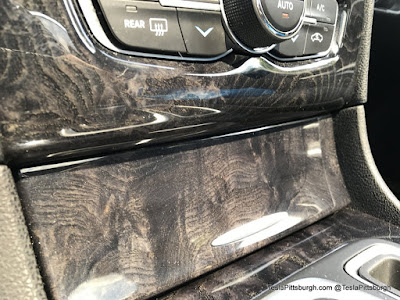 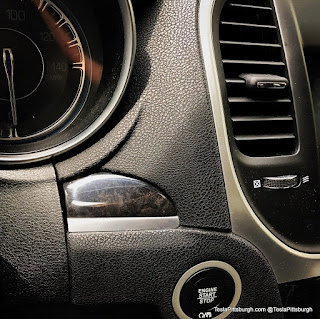 The wood is painfully fake and so close to the dreary blackness of everything else that it’s almost like Chrysler created a grainless tree.  There’s also an errant blob of the fake wood trim that, once seen, can never be unseen.  I know why it's there and it makes sense... but every turn of the steering wheel became a peak-a-boo game with the poor design. 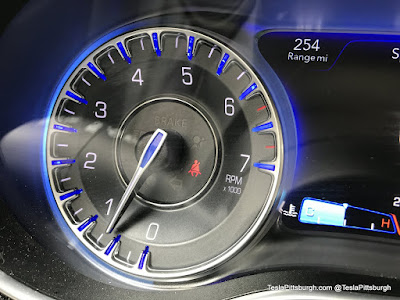 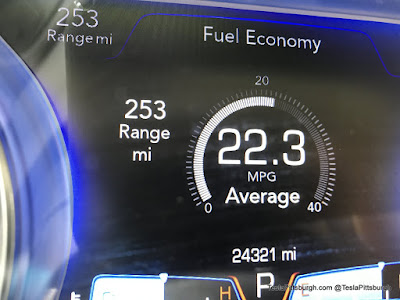 The central gauge cluster is a nice piece of eye candy and has a sizable display embedded into it as well.  The graphics are really sharp and crisp and the display can be toggled through a variety of panels showing you, among other things, how thirsty that stupid drivetrain is.  I have to admit though, I love the blue dash lighting.  Our new Subaru Outback has predominantly blue dash lighting and is a far superior vehicle to the Chrysler... but I'll credit the 300 with catching my blue eyes first. 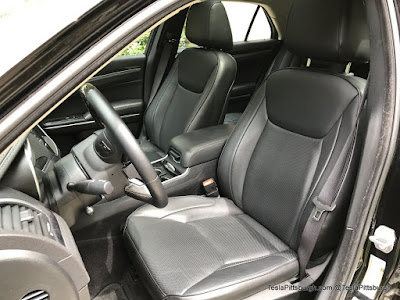 The rest of the interior has all the critical amenities of a luxury-biased mid-market car.  The seats are very comfortable-- plus they’re heated and cooled!  Cupholders everywhere, huge door pockets and armrests that are softer than I thought possible, coat hooks, etc. 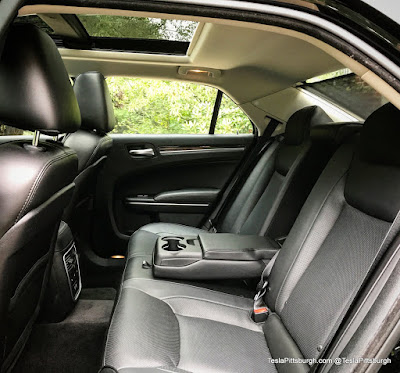 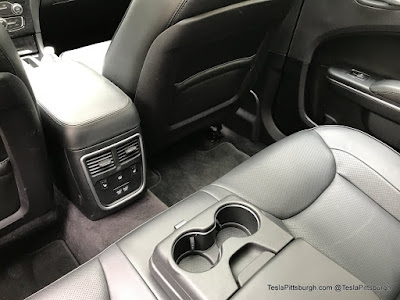 The rear is particularly roomy with the blocky roofline affording lots of headroom.  This would be a great car to ride in the backseat, with dedicated controls, power sunshade and chargeports--  AND CUPHOLDERS in a FOLDING ARMREST. 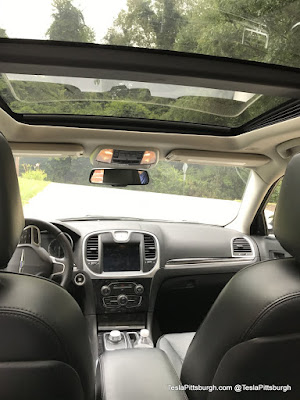 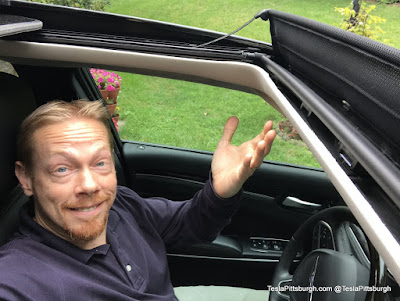 There is also a large glass roof with an integrated power sunshade-- in fact, I didn’t realize until a couple days into our rental that it even had a sunroof!  When the shade is closed, it looks like a standard fabric headliner.

Interestingly, there apparently WAS a plan to put a power sunshade in the Model S, based on a section I found in the service manual…  but it never appeared, even on early production cars.

As my time with The Gangster was coming to an end, I had a startling realization that will, no doubt, prompt cries of outrage from my fellow Tesla owners.  Close your eyes and imagine the 300 with an electric drivetrain and access to a fast charging network-- and even at the same price as an S, I think I’d get the electric Chrysler.  It’s just BETTER, except for that dino-burner up front.  The build quality is-- quite frankly-- at least as good as Tesla and likely better.  The interior is nicer and has more features and perks.  The size is even comparable, if they’d make it a hatch.  Electric Magnum? 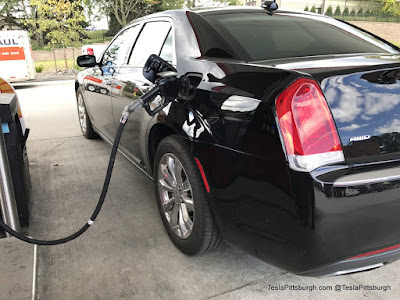 It’s a great simplification, but my point is that it comes down to this:  Chrysler and other mainstream automakers need only figure out the electric drivetrain and charging network.  Tesla needs to figure out EVERYTHING ELSE, including how to build the darn things on time and en masse.  I’m not sure who will get to the next level first, but the wolves are clearly at the door and Tesla needs to step up their interiors-- and adding a couple map pockets and coat hooks to the Model 3 is not going to be enough. 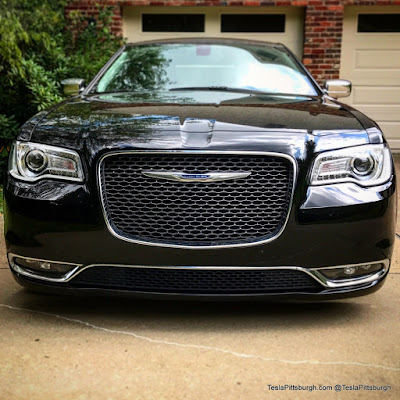 Meanwhile, Cochran used the extra time waiting for the correct parts from Tesla to dig into another lurking issue I asked them about.  I thought it was just a minor bit of rust on my Torklift hitch but it turned out to be a major concern… major enough that I’m *almost* grateful my car was hit, otherwise it might have gone undiscovered. 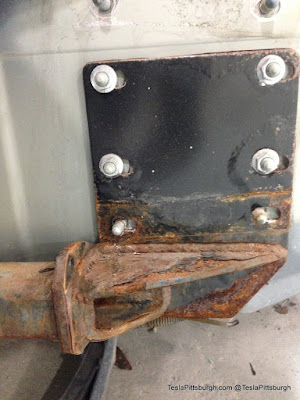 Return to Part 1 by clicking here...