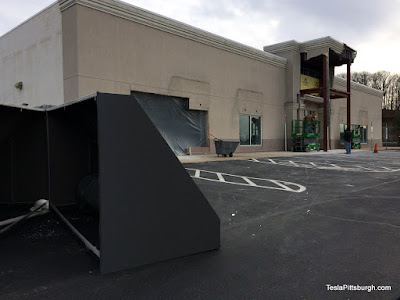 After a quiet break for the Thanksgiving holidays, workers at the new Tesla Pittsburgh Service Center have dramatically picked up the pace with an opening date in early 2017 squarely in their sights.

In October, construction crews seemed mostly intent on getting the hardscape and landscape of the property in order.  Driving by the property on my various errands, I was disheartened to see that November seemed to be the month of stagnation...  so imagine my surprise to see all the activity today when I stopped by! 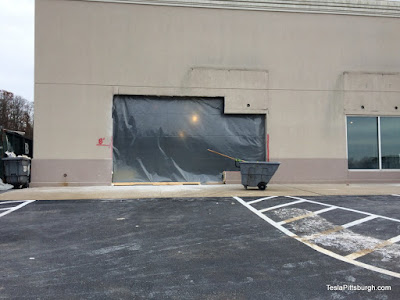 The ugly dark grey awnings have all been ripped down and the Rubicon is being crossed as giant holes are cut into the building's facade where the new garage doors will go.  This one will be the entrance door for cars going into the service bays.

This new service center can't come fast enough.  My car is currently at the Cleveland Service Center enjoying their hospitality while I whoosh around Wexford in a loaner car which smells like the previous user was a heavy smoker. 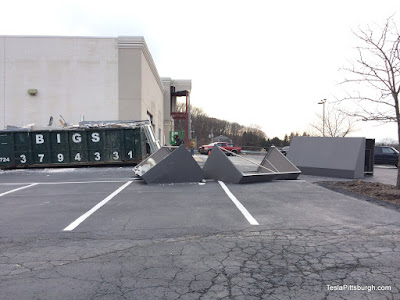 The workers onsite were unfazed by my borrowed CPO car -- which you can buy for $57k when I'm done with it -- and immediately climbed down and started firing off questions about the cars and how they worked.  While they poked around the opened hatches and doors, I found out a few things about the project. 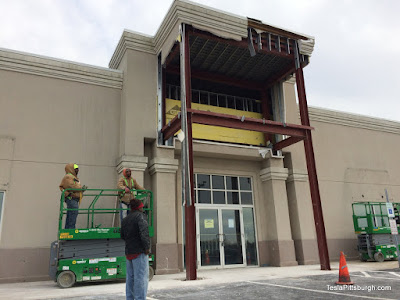 While it was in front of us all the time, I guess I didn't realize it when looking at the architectural drawings that the protruding parts of the facade were going to be removed.  Guess they won't have to worry about that big "Ethan Allen" embossed logo after all!

The steel will be reclaimed and the workers say those will likely be down by the end of the week.  The space between them will be flattened and will then be long enough for Tesla to properly display their logo. 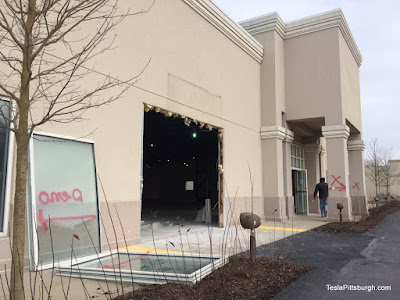 There will be three new doors cut into the building in total.  Two of which are already done.  This one is on the side of the building facing Route 19 (the main road) and it will be used for customer deliveries.

Two cars will fit side by side behind a series of bi-folding doors with access to the adjoining sales display area and service bays.  You can see the protruding front columns and surrounding structure are already marked for their demise. 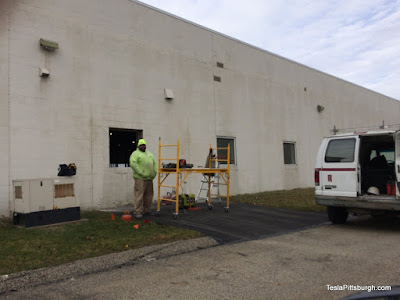 On the "alley" side of the building will be the exit garage door for the service bays.  Workers were just starting to make their cut into the wall as I was leaving. 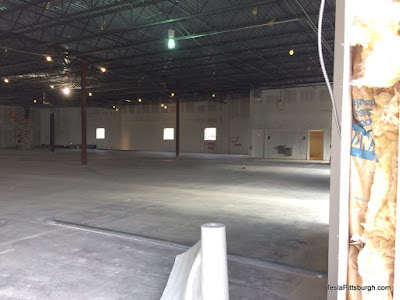 That hole should be done by the end of today-- you can see where it is marked on the interior wall.  From what they said, the doors are not yet on site but arriving soon, which means the building should be buttoned up from the weather well before Christmas. 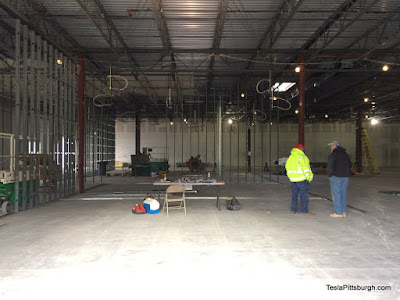 Through the wall immediately behind the delivery garage will be the various workspaces for the service personnel and their customers.  Cars will enter the service garage door from the left and travel along that far back wall to the service bays on the right. 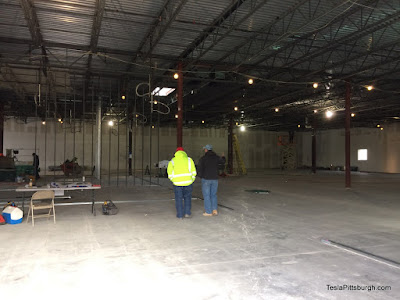 The service bays will fill the surprisingly cavernous area on the south half of the building.  Tesla should easily have room to work on at least half a dozen vehicles at a time, plus storage for parts along the far right wall in a separate room that will be boxed in starting with the red column on the right.

Full plans and details from when the design was first presented to the local zoning/planning commission can be found in my earlier post.

The interior crew tells me they have about 6 weeks of work left to do, which means their part of the project should be completed by the end of January 2017. 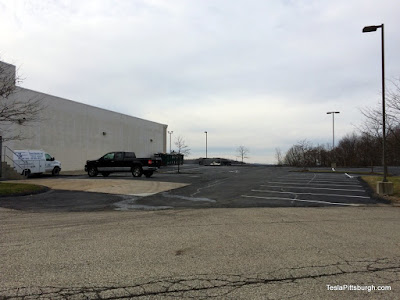 Moving to the backside area of the property, the work from October has been completed.  The lot has been repaved and new lines painted around the new plantings. 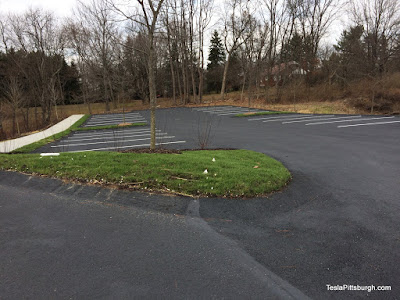 The all-new secondary lot has also been completed, with its pristine sidewalks and young trees waiting to be filled with newly arrived Teslas.  Just imagine... by the end of the 2nd quarter of 2017 this lot could be full as the push kicks in! 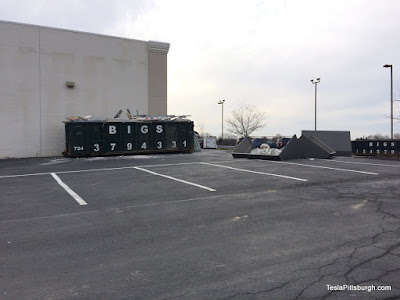 As the construction continues, we'll keep you updated.  Word on the street is that Tesla is getting ready for a Grand Opening in February 2017.  My conversations with the workers would seem to be in line with those expectations.

Interestingly, the company that purchased the building is already looking to flip it for a profit.  Tesla has a seven year contract already in place, so we'll have to see if the building sells for the four-time profit the landlord is hoping to make.  If they get it, that would definitely affect the lease renewal rate and somewhat clouds the future of how long this location will be Tesla's home in Pittsburgh.