Where All the Cars Are Above Average

My parents and I would spend road trips listening to Garrison Keillor's "A Prairie Home Companion" to break up long stretches of music.  As a restless youngster, the tales from Lake Wobegon were always a welcome respite from my father's Willie Nelson or yet another round of Peter, Paul and Mary complaining about their lemon tree love.  In Lake Wobegon, everything was pretty idyllic despite also being able to prop up Keillor's local news with some entertaining stories. 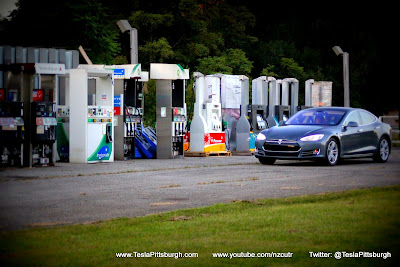 I'm beginning to think that perhaps Fremont, California is the EV movement's Lake Wobegon-- or perhaps the entire auto industry's (especially as the Volkswagen diesel scandal grows).  If you're at all familiar with NPR you're probably really scratching your head about now... I know, it seems like a very random association.  Let me explain...

Keillor describes Lake Wobegon as "where all the women are strong, all the men are good looking, and all the children are above average."  In Elon's factory in Fremont, the same could be said.  There's a workforce of vibrant professionals-- many of whom are military veterans-- and they work alongside devastatingly handsome robots built by KUKA  that are named after superheroes.  From these "parents" (the workers and the robots), offspring are produced... and those "children" are-- unequivocally-- hailed as ABOVE AVERAGE.

The Model S has swept every award that has dared to consider it eligible.  It's just a damn impressive machine.  Even the staid Consumer Reports has made their fingers do the walking over pages and pages of their thesaurus trying to find creative ways to complement the car without sounding like a fan-boy written press release.  As an owner, it's easy to understand why: 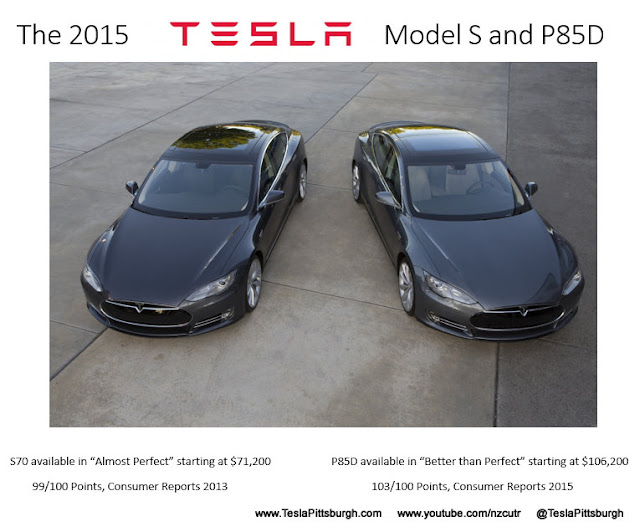 It's no secret that I absolutely adore this car.  From my first test drive I was hooked.  Numeric gyrations and many hours spent in sober discussion with my better half meant that attaining the best car in (at least) a generation would be a doable feat.  I suspect that many car magazines have had similar debates-- it's the only explanation that makes sense for why the Model S has been so RARELY featured in a comparison test.  It would win too easily.  When it has been included, it seems to be marked down-- without fail-- due to unrealistic perceptions about how an owner would charge it.  A regular 120V outlet?  REALLY??  Puh-lease.  You're making my eyes hurt from rolling.

Recently Consumer Reports tested a dual-motor performance version of our car: the P85D.  It broke their scale.  Crushed it.  It was so exceptional in all their predetermined tests that the numbers just didn't add up.  It was glorious fun to pitch the story to my colleagues-- undeniable, legitimate news! Serena is well-known in our parking lot and-- frankly I'm shocked-- still the only Tesla outside a building full of technologically sophisticated employees.  With there-he-goes-again smirks all around the newsroom, I wrote up as unbiased a story as I could muster... then watched our sister stations push it around the country:
Video from: http://www.wpxi.com/news/news/tesla-breaks-consumer-reports-rating-system/nnR8q/

As a car-crazy teenager, at my peak I was subscribed to 5 car magazines at the same time.  I had always told myself that if one car ever swept awards and reviews by storm, I would buy it.  It took a while, but one finally did.  So I did.  Lucky for me it was a practical family car or else that could have been an awkward conversation with my wife.  Our car is the "Almost Perfect" regular 85kwh battery, rear wheel drive version.  I've since tried the dual-motor all-wheel-drive versions with Autopilot and can assure you they are even better (though we do make regular use of our more generously sized frunk and would miss it).  If you have not yet tried these cars... what in the world are you waiting for??  Test drives are free and Tesla reps are eager to demo the cars to anyone who wants to sample the best car in the world.

I know it's expensive to buy, but it is not expensive to own.  There's even a new "budget" model, the 70kwh single-motor version.  Not to mention a vast array of Certified Pre-owned cars.
For the next month only, Tesla is even letting owners like me offer you a mutually beneficial discount if you use my referral link.  The Model S has already won the awards.  It's above average and wants to be your "home companion".  Save a $1000,  BUY HERE: http://ts.la/matt327.  Also, call the local store and give them the heads up, so they can get a little love from the corporate office.  It won't cost you a penny extra and they'll thank you for it.

And.... here's a little something for anyone too young to buy the real deal.  These are on sale now (somewhere?!?) and have superb details.  I seem to see the Hot Wheels version everywhere-- but the Matchbox is the one you want: 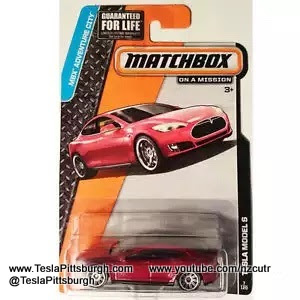 Need more reasons?  Check out Autotrader's 5 reasons to buy a Tesla:
Thanks for visiting us here! CLICK to read more at www.TeslaPittsburgh.com, check out the videos on our YouTube channel at www.YouTube.com/NZCUTR and follow us on Twitter: https://twitter.com/TeslaPittsburgh. Local owners/enthusiasts are encouraged to join our CLUB page: https://www.facebook.com/groups/TeslaPittsburgh/