We'd ventured out after a morning snow storm to attend a Super Bowl party-- sorry, to watch "The Big Game"-- figuring the worst road conditions of the day were past us.  Even if they weren't, my expectation was for the possibility freezing rain and black ice-- so the question was:  Take the AWD Subaru on all season tires...  or take the RWD Tesla on its winter Nokians? 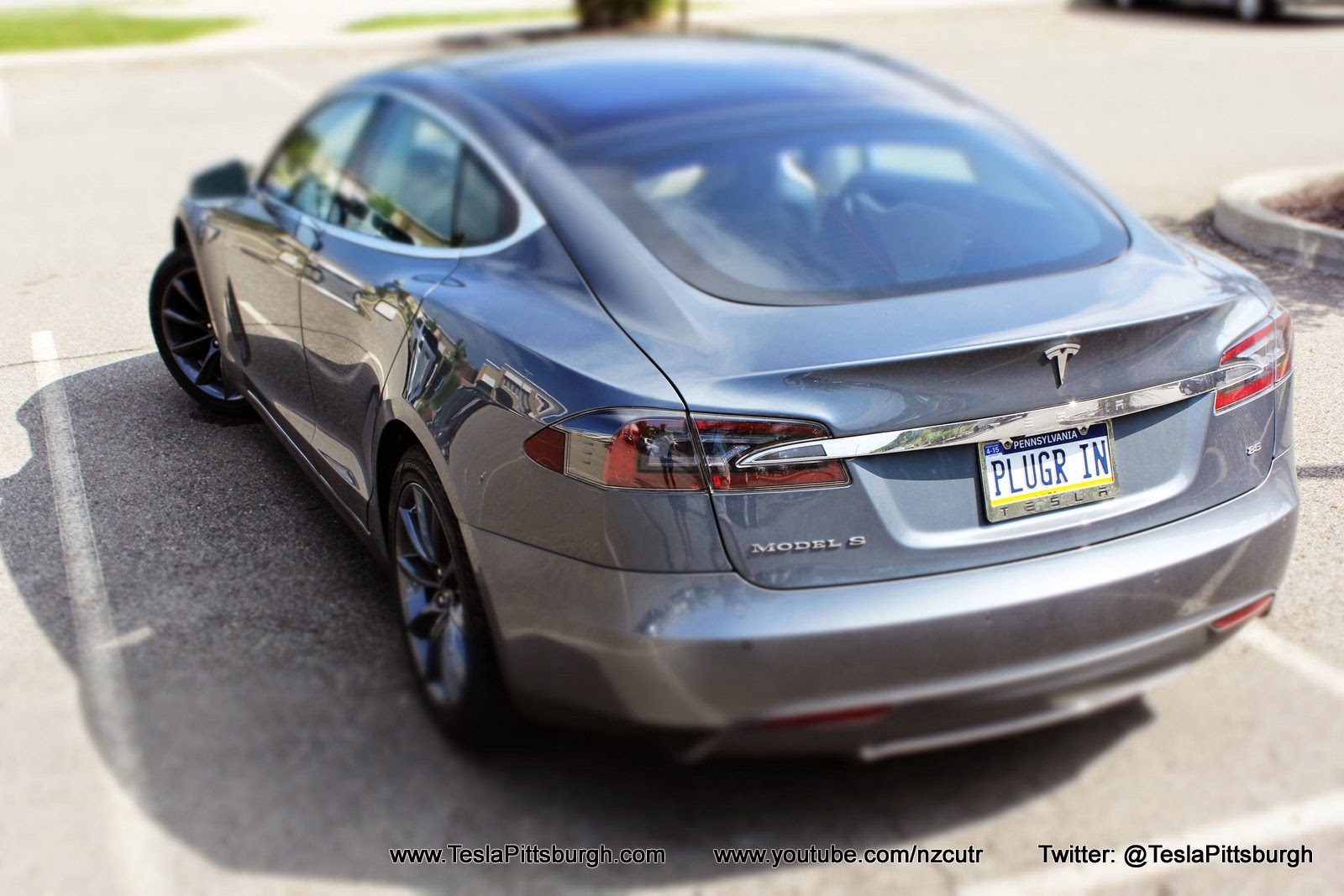 Reasoning that traction would be better for turning and stopping with the winter rubber compound tires than with the AWD alone, we took the Tesla.  And we almost didn't come home with it.
Check out the video after the jump.

Like most kids, if you'd asked me what I wanted to be when I grew up, "race car driver" was on the list and pretty close to the top.  As it became clear that my competitive driving aspirations were greatly hampered by not being a blood-relation of Mario Andretti, I focused instead on techniques that I thought could prove useful off the track.  There was a lot to be learned by watching hours of racing (all kinds) on television, but it wasn't until I started driving that "situational awareness" rocketed to the top of my list-- even above the Scandinavian Flick.

My "hallelujah moment" was the first time I was surprised by a rocketing and (nearly) bump-drafting BMW on my bumper on the autobahn.  I essentially learned to drive in the demanding and rigorously standardized environment of Germany and, as such, have a very different approach to driving than the average Pittsburgher (for one, I don't brake for tunnels).  Massively fast German executives bearing down on you in the "Luftwaffe lane", turn signals firing tracers into your mirror and headlights impatiently flashing where seconds ago there was only empty tarmac will definitely bring some perspective into your previously held beliefs about what vistas deserve your attention as a driver.

Even in the more relaxed and lackadaisical environs of American suburbia I avoided being crashed into numerous times-- in all kinds of weather-- simply by watching my mirrors and paying attention to cars as they move in and out of blind spots.  I've also NOT avoided at least one crash (though I was able to lessen its severity) when traffic stopped suddenly on the approach to the Fort Pitt Tunnel and the car behind me was caught unaware.  He then fled the scene but damage was minimal to our trusty Subaru-- ah, but I digress....

Knowing the roads were potentially bad, we drove home from a Super Bowl party with a light touch. Freezing rain and melting runoff were coating the roads in black ice.  Annoyed that the big Ford F250 behind me was closer than I liked, I modulated our pace to keep a bigger buffer between us and him.  I'd let the semi in front disappear ahead a bit then throttle up on the following straight to catch it and leave the F250 far behind in our wake... until he stubbornly latched onto my bumper again and I had to slow to repeat the process.  I'll never understand the thinking of people who tailgate in vehicles clearly unable to stop as short as the cars they follow.

Before long my suspicions were confirmed by road flares and a Toyota nosed into a snow bank.  The conditions were worsening and we still had a ways to go.  About 3 minutes later, as we descended a steep and winding hill, I relied on the regenerative braking to maintain a controlled pace.  I noted a very slight wiggle/slithering sensations-- imperceptible to my passengers-- and recognized immediately that the car was working to keep us straight as the grip underneath disappeared.  I lengthened my following distance from the semi so I could "run away" from the F250 again but-- sure enough-- moments later brake lights lit up our forward view and I knew he was still too close.

We could hear the air brakes of the semi fighting against the icy pavement,  I planted my own brakes and felt the tires surrendering their grip as we began to yaw within our lane.  We were still quite a way behind the semi so I only needed a touch of friction to get stopped and-- mercifully-- we seized upon it quickly.  Eyes on the rear view mirror and I saw the F250 was close enough that only his grill fit in the frame... and he was rotating his right front corner dead center of our rear bumper.  With lots of real estate between us and the semi, I dancing my foot off the brake and firmly jabbed the throttle again as I tried to gauge the right force necessary to gain the F250 enough room to stop AND allow us to stop before hitting the semi that was still motionless out the windshield.   After all, it wouldn't do us much good to crunch our nose into the semi (our fault) to avoid being hit from behind (F250's fault)!  I thought about ducking into the oncoming lane as we began another sideways slide but saw headlights reflecting on the pavement ahead and-- without knowing if they were moving or not-- that seemed unwise.  The F250 had rotated completely sideways and looking back into the rear view mirror all I could see was black metal reflecting our brake lights with no way to judge how close it was or if he was still moving.  I stopped our rolling and braced.  After another second passed I caught sight of the F250's right headlight in my side mirror and confirmed with my son (in the backseat) that the Ford had stopped completely sideways -- and whoever was behind him was also stopped.  By this time the semi ahead was moving again and we made our way home (with that darn F250 STILL TAILGATING-- some people just can't learn?!) without further drama.

The video below is from our dash cam.  Keeping in mind that the lens distorts distance a bit due to its wide-angle (which makes it less exciting than real life!), you can see the situation ahead develop.  Then CAREFULLY watch the left side of the frame-- the snowbank-- and you'll see the white-light of our Tesla headlights blend and get overpowered by the yellow-headlight glow of the careening F250.  Without the leap forward, we'd have surely been hit.  As it was, I'd guess he stopped only about 5 feet off our stern.  Watch the light on the snowbank and you'll see what I mean!
Last night's near miss was a textbook example of why watching your mirrors is important.  The Tesla is widely acknowledged to be good in snow (with proper tires) despite being rear wheel drive and nearly 5000 pounds.  The battery keeps the center of gravity just above the road surface which minimizes the lateral weight transfer.  Combine that with infinitely and instantly variable torque at the drive wheels and a traction control / stability control program to keep you straight, the Model S has proven its winter credentials.  I can't even imagine what the new AWD versions will be like when equipped with snow tires, but check out this video of an early P85D climbing the unplowed Rockies.

Many Model S owners report altering their regenerative brake setting (or disabling them entirely) during slippery weather.  While I understood their reasoning (that they act only on the rear wheels and could provoke a spin), I further reasoned that the stability control would override any tendency to spin.  Alternatively, a light application of throttle would neutralize the regen while simultaneously checking your downhill speed without actually using the brakes-- which would be a desired result in extremely slippery situations.  So I have, so far, left my regen on the standard (high) setting.  In the incident last night, the unforeseen side effect was that as I relied on the regen to maintain a controlled descent, the car "wiggled" slightly as the stability control endeavored to keep us on our desired course.  This minor shudder was perceptible only to me (relative to the steering wheel) and served as an early warning of sorts that the slope was lacking grip.  It primed my senses and alerted me to expect trouble... something a gas car wouldn't be able to do without touching the brakes first.  Perhaps an unintended consequence of the design but really useful and worth keying into.

In the end, we arrived home safely and with no damage anywhere.  The kids were only peripherally aware of how close we'd come to our week becoming a disaster of insurance claims and car juggling.  I was well aware of how close we'd come to significant damage-- we all know Tesla accident claims are rarely less than 5 digits, even for minor impacts-- but still confident that it was the right car to take and that I'd driven it as best I could.  Let that be a reminder to everyone-- leave room and WATCH YOUR MIRRORS!  Always have an escape route and be ready to MOVE on your escape route if necessary.  You might have to!

Worth mentioning, never did it occur to me that we were in any physical danger.  Don't mistake my concern/annoyance over nearly "crunching" the car to be anything other than complete confidence in the safety of the Tesla.  Overall speeds were low enough that I knew the Tesla would take any of the potential blows with ease-- none of us were at any risk of being harmed, EVER-- a luxury I would not have had in the Subaru, a much older car without even side airbags of any kind.  As has been widely reported, the Tesla is built like a freakin' tank where it counts for human preservation... if not for its own.

The Subaru might have stopped a little farther down the road and left me with much less space to move into when the truck behind us loomed-- but then the Subaru wouldn't have alerted me to the ice patches as early as the regenerative braking did.  I might not have been aware of the deteriorated conditions in time to avoid the semi myself and without my brake lights to warn the driver behind, we might have been sandwiched between two large trucks in a car with less crash worthiness than the Tesla.

All in all... I'm just glad we avoided a repeat of what happened with our Chrysler.