You know it can't last, right?  The beautiful sunny days of your youth will fade into the cold and dark nights of old age... or maybe that's just the beginning of a seasonal depression kicking in.  It did rain today, after all.   Yes, WINTER is coming.  Bright glints of green and blue on my Model S will soon be replaced with a crushing sense of Belgian-greyness.  In my preemptive defense-- I lived in Belgium for several years and that's where they store the fog when London isn't using it. 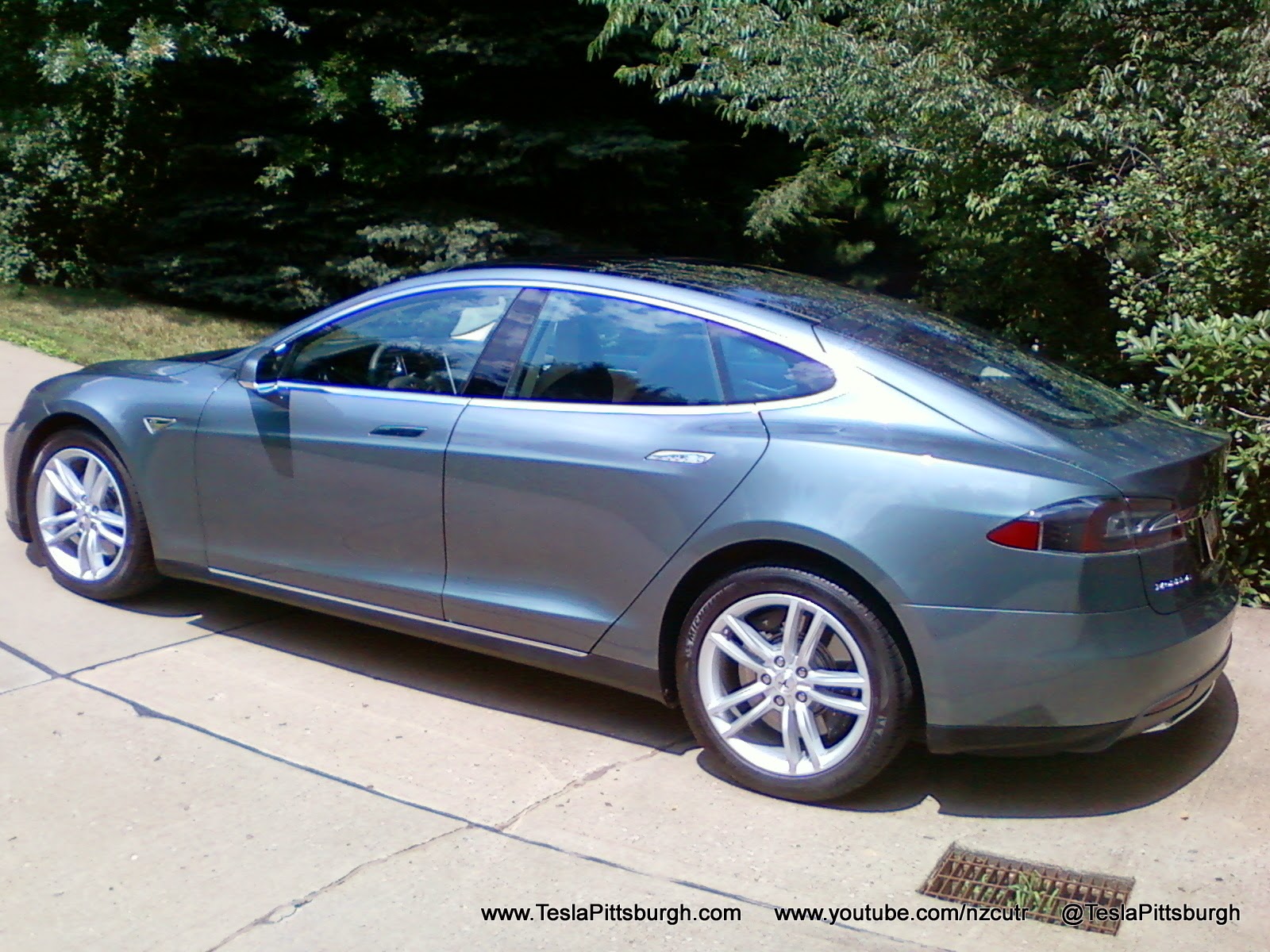 I knew going into this car purchase that I was eschewing my self-imposed declaration (after multiple Subarus) that all ours cars would now and forever all be AWD.  Sigh.  But I couldn't resist the Tesla's pull.   So here we are... what to do, what to do, what to DO?

If you've followed along this blog, you know that I've been planning for Winter since before we bought the car.  In fact, I was one of the first owners to get the TST wheels from TSportline back in May.  They actually arrived here long before the car did... and tortured me for months.  MONTHS waiting to see them on my car.   Lest you not appreciate how tortured I was, I will let you share in this pain...  for you shall not see them mounted on the car until Part 2.  BWAH-HA-HA! 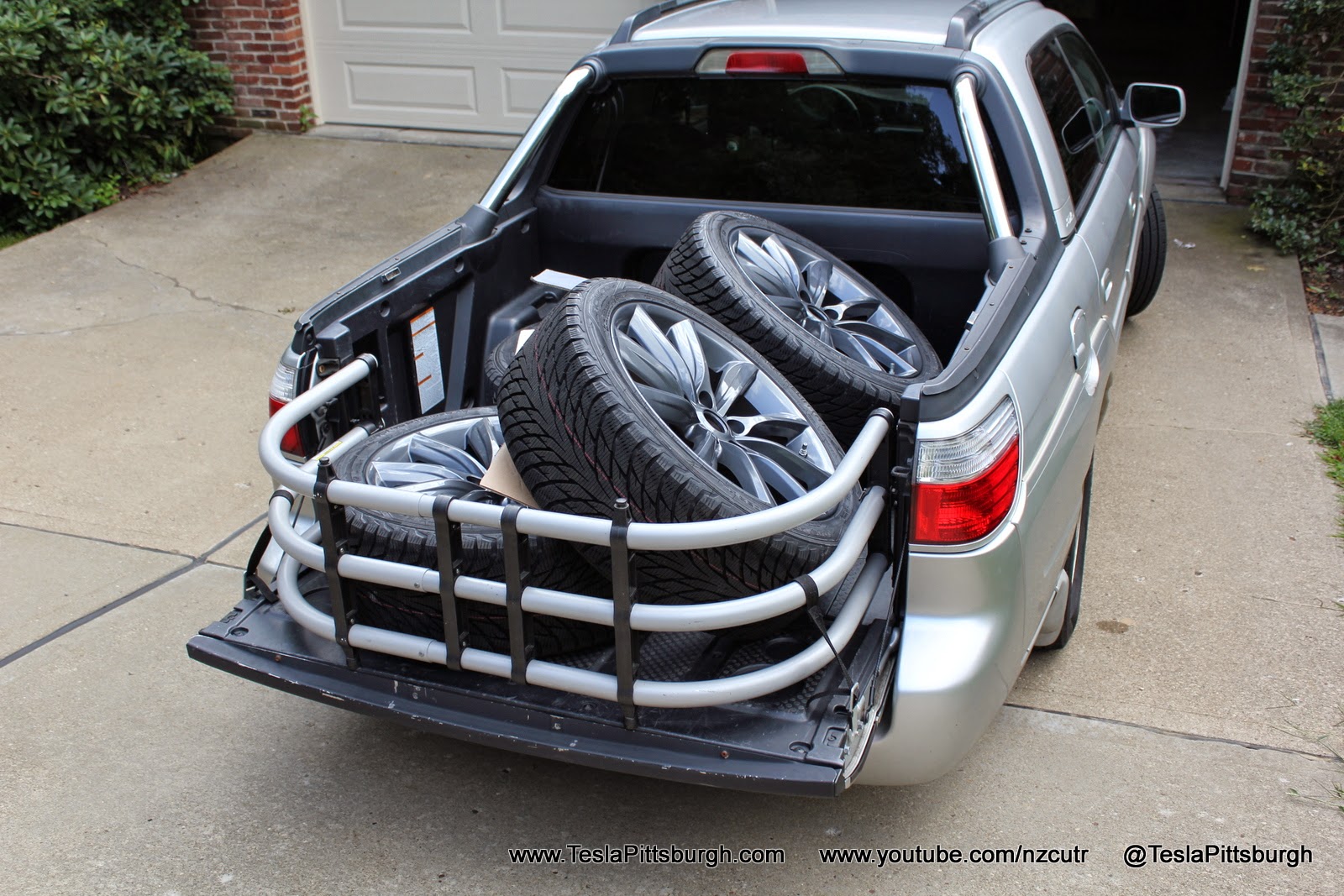 With a Tesla in the driveway and wheels in the basement, I knew I had to get on the next piece of the puzzle.  The tires.  Before anyone else swooped into the local tire shop and snatched away the last set right when I needed them.   I quickly ruled out the popular Michelins because....  well....

The Model S tire size is conveniently weird.  I say conveniently because the lack of available tires means that your shopping is pretty quickly over.  Like a NBA player shopping at Payless Shoes it pretty much comes down to "I'll take whatever you have in my size... and please don't hurt me."  Fortunately I was so far ahead of the seasonal shopping curve that prices were pretty satisfactory and my local store even had the exotic Nokians in stock for less than the Michelins.  Glory be! 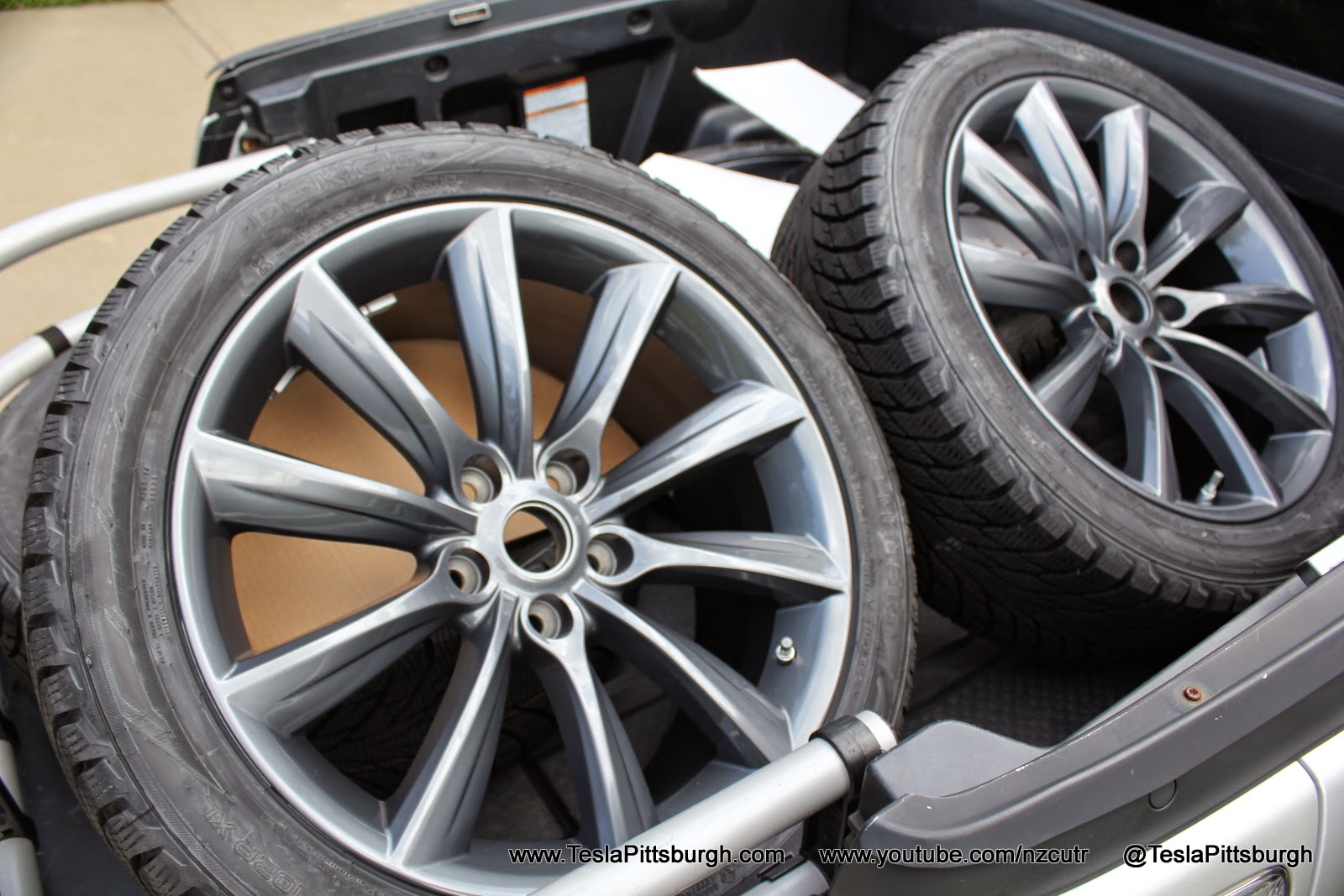 Nokian tires are from Finland.  A land exotic to many because they are pretty sure it's somewhere over by the Swedes (right?) and they play hockey there when not using their nearly defunct smartphones.  While certainly hockey players are a large part of the Finnish GDP, it's also a nation that has conquered Winter and-- even more impressively-- has conquered those whom WE think have conquered Winter.  All those Cold War images we have of huge masses of Soviet troops in fur hats?  Yeah, the tiny nation of Finland BEAT THEM.   Beat the дерьмо  out of them!  Yay Finland!  Wouldn't you love to see Boris' dashcam as he scampered back to Russia being chased by angry Finnish farmers??  So they know a thing or two about dealing with snow. 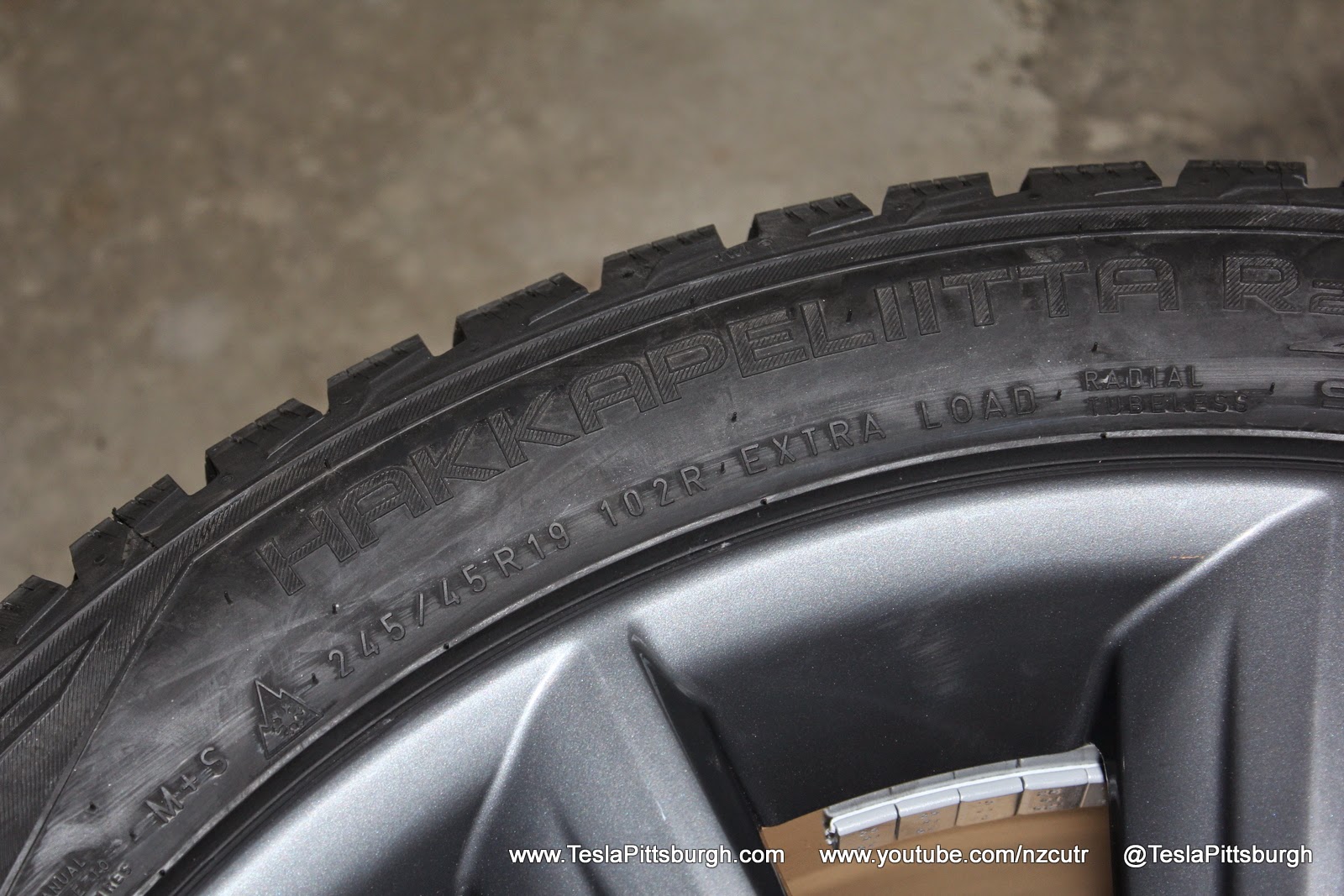 Even more importantly, my wife was born in Finland so this purchase gets me some street cred with her.  It's a lot easier to sell your wife on an idea if you can appeal to her sense of patriotism and national duty.  Plus it gives me a chance to regularly bask in her ability to pronounce the alien language of the Finns...  Name another tire-- ANY tire-- with a name as long as this:
Tires secured, there were only the TPMS sensors to get.  Ever the cheapskate, I found that TireRack sold them for less than Tesla and BOOM, order placed (UPDATE: Tesla has been undercutting the TireRack prices sporadically, so check both places before ordering).   I loaded up my trusty Subaru truck for the trip to the tire store and was soon back with a ready-to-mount set of snow shoes.  (Yes, they all fit in the Tesla too, but I didn't have "custody" that day...  how else do you think I talked my wife into getting one??)  Once back home all that remained was to pop on the Tesla center caps (which were delivered with my car). 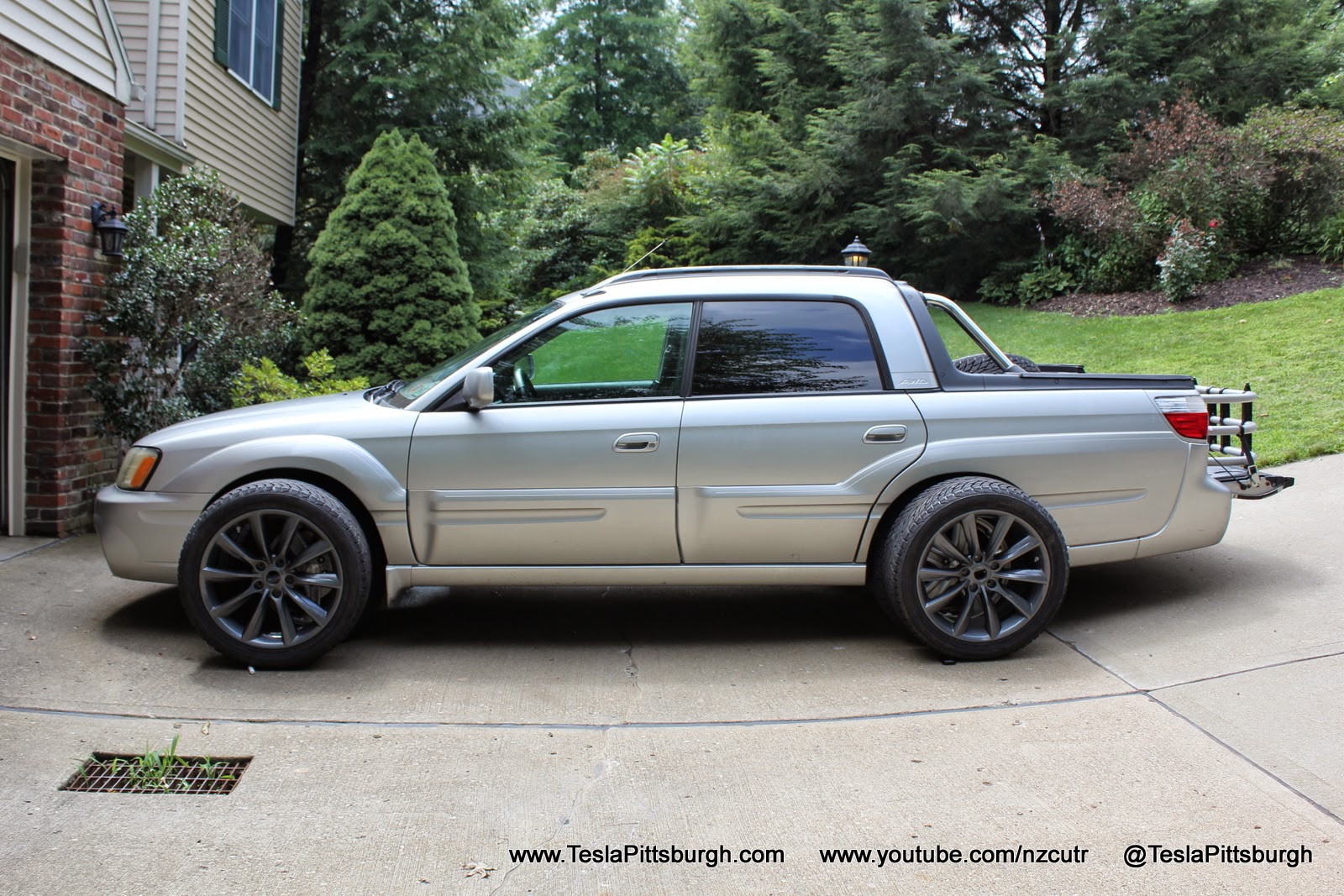 Not that you would, not that you could, but I wanted to see what they'd look like on the Subaru.  How could I just roll them into the garage without trying it?  Oh yeah, that looks pretty good!   After a while I bet I'd even stop noticing the scraping sounds.  The hourly gas stops would be tiresome, however. 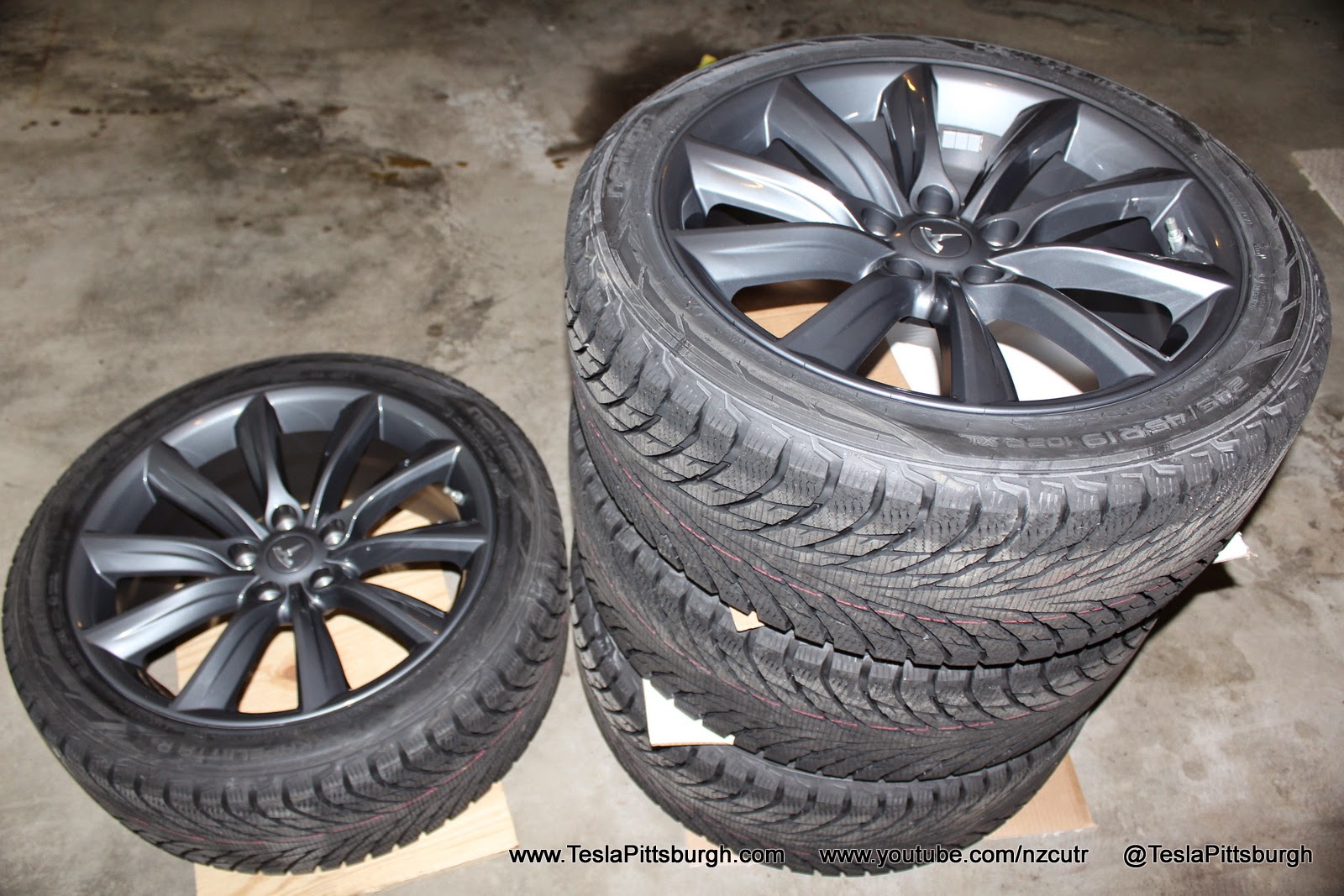 Worth noting-- these tires are conspicuously sticky.  I mean, just wheeling them around and trying to place them/stack them I kept getting my hands "hung up" on the tread.  Really aggressive.  I can only imagine how unstoppable they'll be in snow.  Surely they'll cut through it like a fast typing blogger on a deadline. 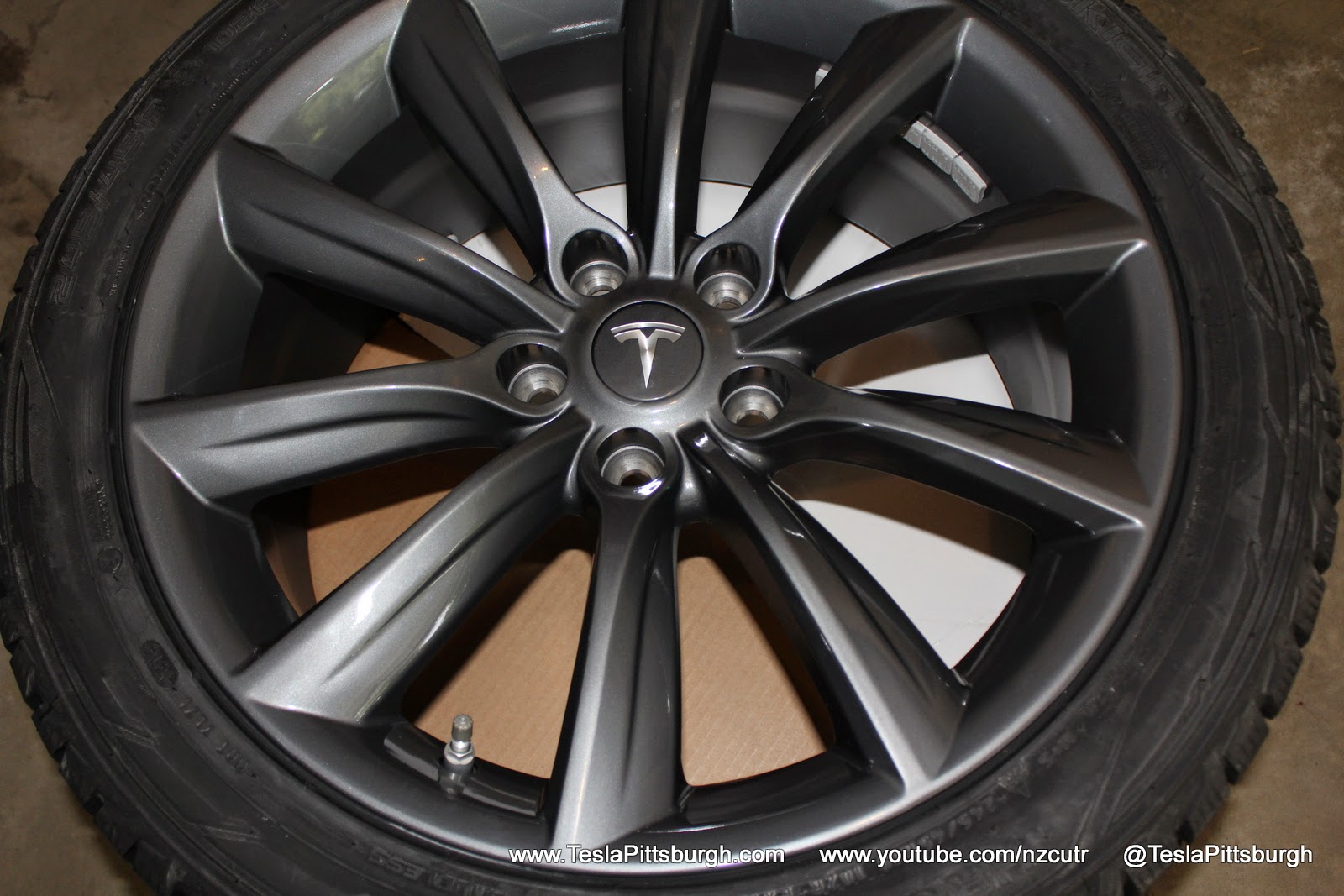 If you look closely here you can see there is a slight color change from the darker/brownish tone of the Tesla grey (on the cap) to the cooler/lighter TSportline wheel.  It's really not noticeable without a camera flash and both colors are deep and rich.  The cooler grey looks even better with my paint than the factory grey-- though on a brown Tesla you might miss the warmth of the factory hue.

Part 2 will be from our test mounting of the set and how to reprogram the TPMS sensors on your Model S.  I leave you with a little preview picture: 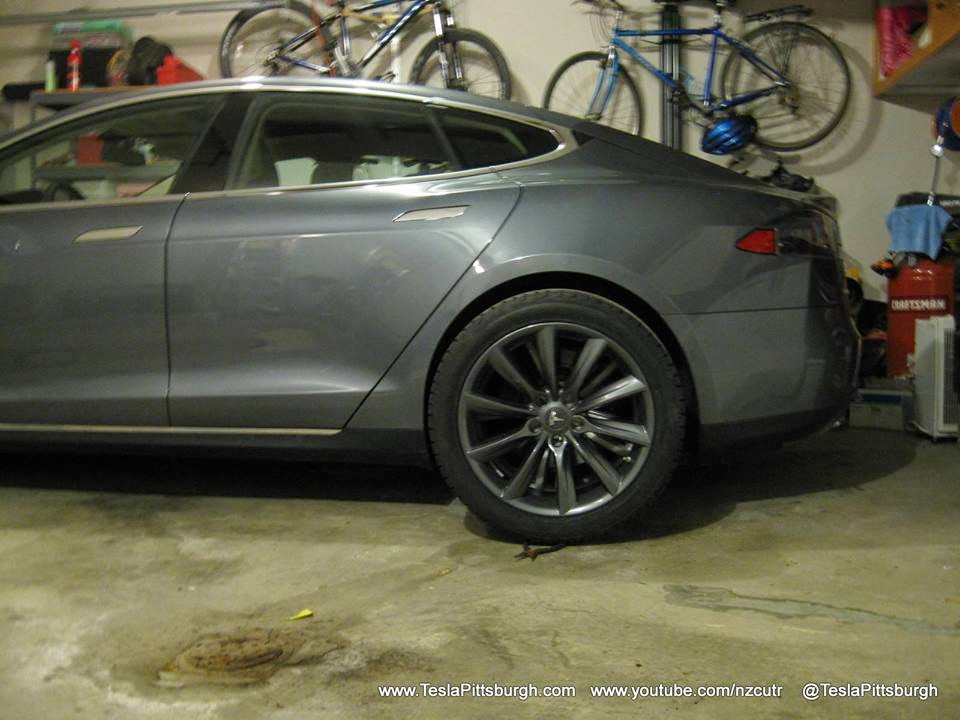