I spent the morning hanging out at a body shop recently (ooo... yes... that IS a teaser, but you'll have to wait to find out why-- but my Twitter followers know already). The guys there spend their days fiddling and finicking as they sort out cars that have been "modified" in accordance with the laws of physics. Their ultimate goal, of course, is to recreate a car so perfectly that even its owner can't tell where it was previously damaged. Ah... but there's a dark art to this far deeper than you might realize. The art of knowing when to stop trying to make something better-- or, as one of fellows said (quoting someone else I wasn't attentive enough to recall): "The enemy of good, is great." 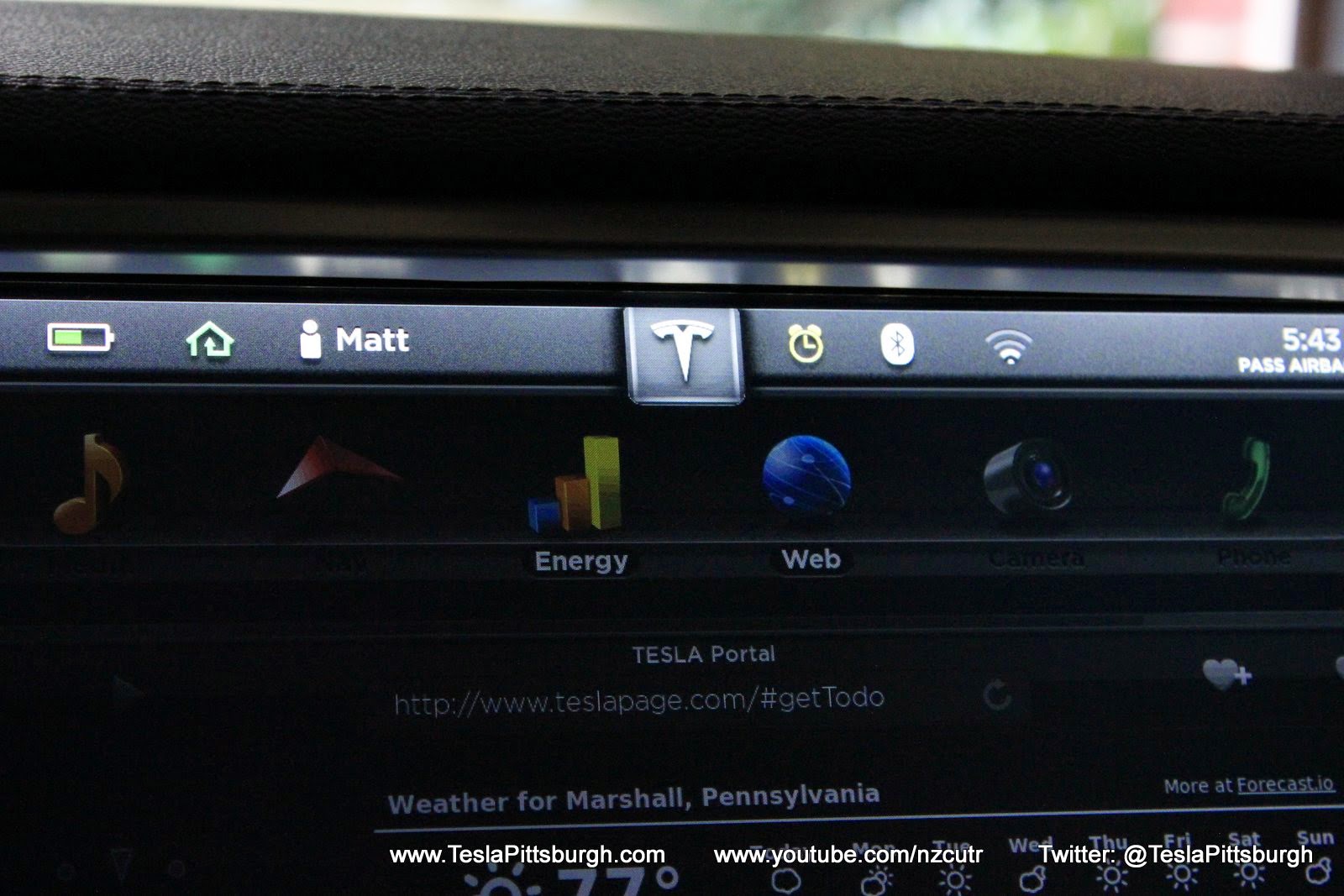 I think Tesla tried for great when they developed Version 6.0 firmware, but I'm reluctantly going to say that after all the build up and hype, so far, it is merely good. GASP!! What?? How dare I!! Let me show you what happens when the "the clock" popped up next to my "T".

If you're a fast scrolling type you'll see that there are a lot of pictures here and even a video at the bottom (I was doing simultaneous Tesla and toilet upgrades-- pretty sure that is a YouTube first).  While I often seek to dazzle readers with extraneous photography, this time the pictures are here for coherent purposes in three sections.  First we'll look the old graphics, then at the upgade/installation process and then we'll see what Tesla has wrought.

Stepping into the Tesla for the last 3 months has always yielded the beautiful view above.  Rich and dark grey and black tones with Serena spotlit in the middle.  I choose to think of it as a model on a catwalk but I suppose as the car ages and IF it ever gets glitchy, that will morph into the bright light of an interrogator's lamp.  "WHY WON'T YOU ____?!?"

The center display-- shown here in night mode-- sports the same general look it has had since the car was launched.  I'd bet it would be difficult to distinguish between a car running 5.12 (like mine) and a car running whatever the first software version was cleverly named.

Looking at the top icons more closely, you can see the yellow alarm clock sitting beside the "T".  If you're the first person in the car you'd actually see a notice for the upgrade.  If, however, you have children... <sigh>  they will close this notification and your only heads up will be that little clock.  The webpage I have open in this picture is a handy one-- even has a notepad function that appears to save your inputs from one day/user to the next.  It could be a very handy message board. 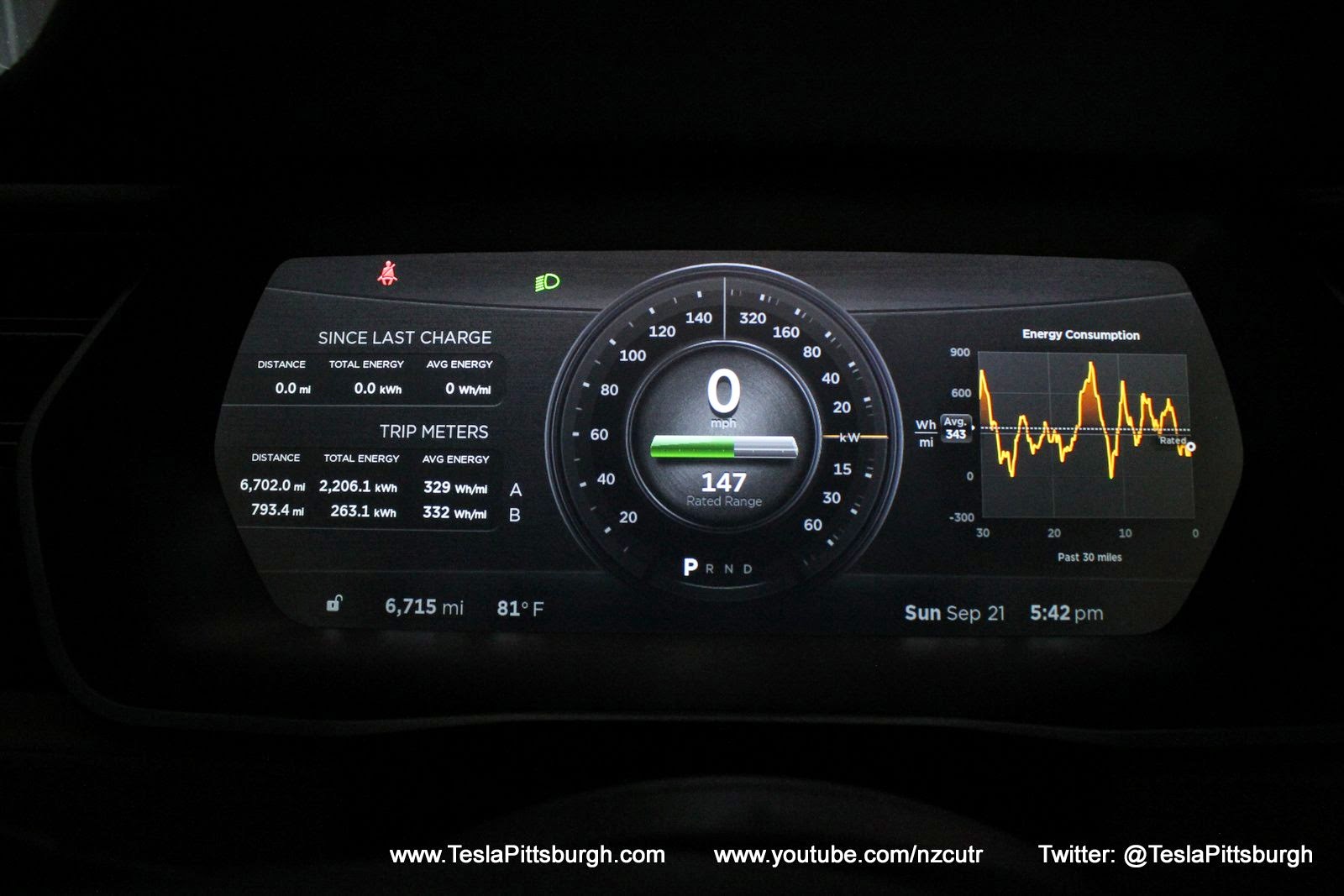 Back to the dash display with the car in drive mode, you can see the speedo-kilo-regeno-meter has replaced our fashion model car picture.  The background is a brushed black aluminum type surface and the main dial has a burnished quality to it.

Looking more closely, you can see the suggestion of a glass bubble sort of back-lighting the main dial.  A light source that appears to be your face (maybe I need some Biden-style spray tanner?) creates a nice reflection on center section of the dial.  The faux swirl marks and highlights are most noticeable here.

If your children haven't already negated your numerous excited trips to check for this window by secretly "x"ing it out, you'll find it popping up when your firmware download has finished.  There are lots of rumors, voodoo rituals,electrical sacrifices and networking exorcisms that can supposedly increase the availability and speed at which you receive your upgrade notice...  but from what I've read, my conclusion is that it comes when it comes and it downloads when it downloads (and sleep mode doesn't appear to have any affect on it).

Once you've clicked the install button, a two minute countdown timer appears and warns you to not anger or look disparagingly at Happy Fun Ball.

Omigosh... here it goes!  What follows is a spooky sequence of creaks, groans, flashing headlights, louvers popping and loud clicks.  This drama goes on for the duration of the installation and charging will stop for most of it.  Your clue that all is back to normal will be when charging resumes and your UMC's green Cylon light starts happily throbbing again. 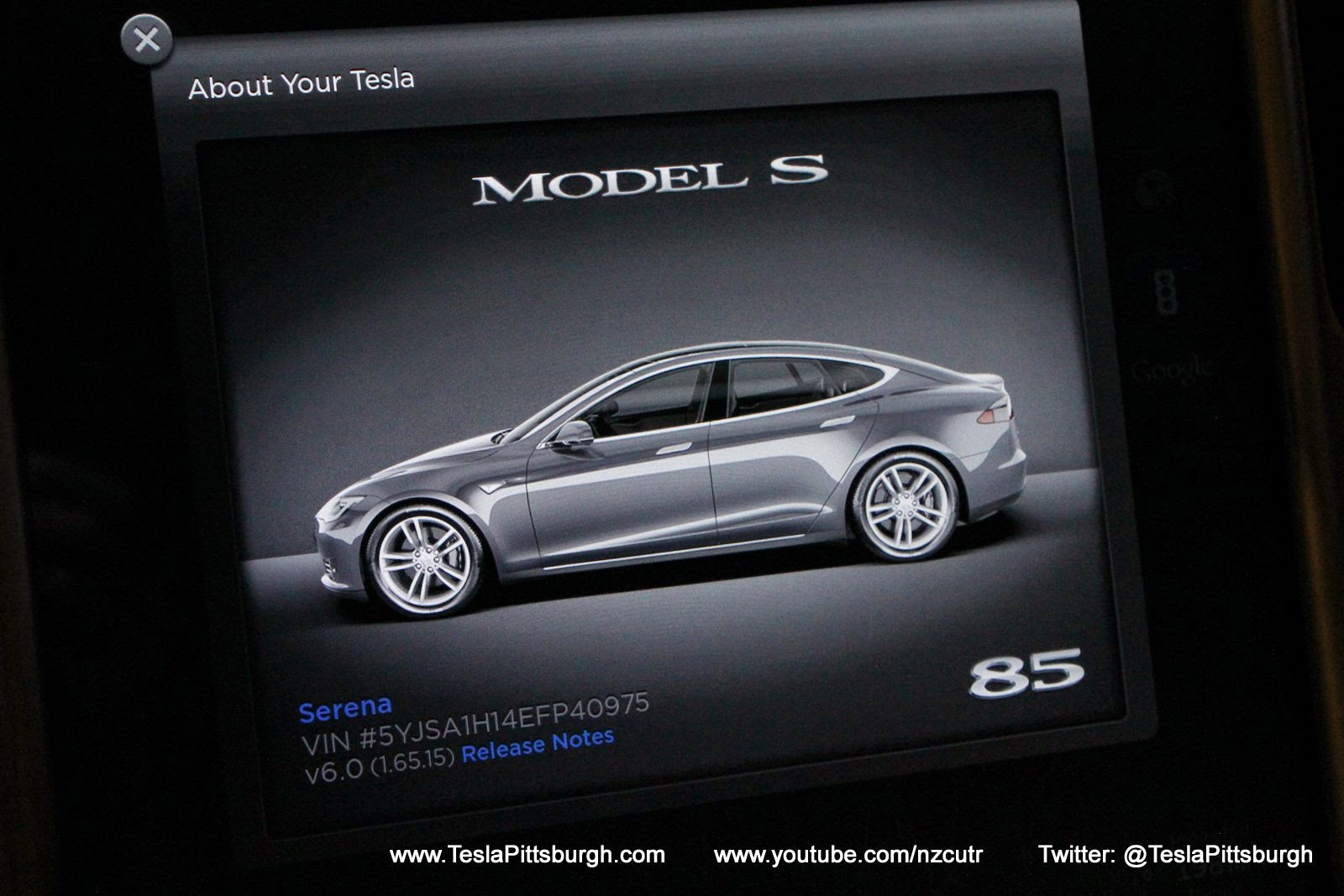 A headline feature of this version 6.0 is that you can name your Tesla.  Okay.  Did that.  Wow.  Moving on....     I suppose this is amazeballs to those of you with smartphones and apps, but here in the land of leaky toilets and Tracfones...   sigh.    I'd be more impressed if Serena's name appeared somewhere on the displays ALL the time and not just when summoned from the "T".

Viewing the center display the only apparent change is the addition of the calendar app's button.  It does show the current date on the button (so you can see how much procrastination went into writing this post-- DOH!) but otherwise all the backgrounds and textures are unchanged.  Launching the calendar app is a good way to remind yourself that you ONLY HAVE A TRACFONE.  Sigh. 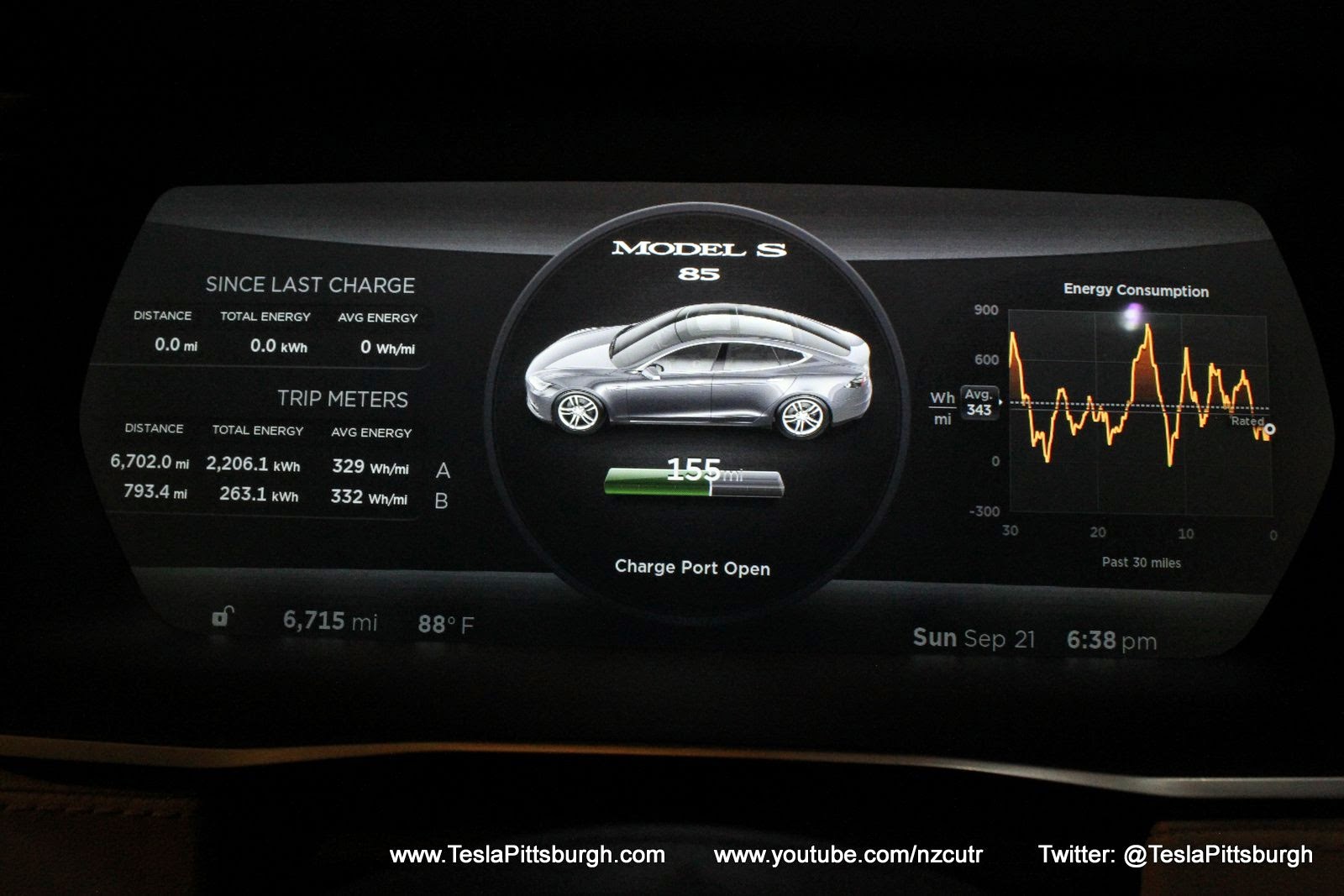 The "entry" or "welcome" page on the dash display also looks mostly unchanged... but there is a faint hint.  See the upper section where the warning lights appear?  The virtual "seam" between the it and the middle of the display is gone.  It's just a line now and the contrasting "glow" from behind the main dial is much more pronounced.

Spinning the main dial around into drive mode reveals even bigger changes.  The lighting effects are a lot less dramatic and the contrast overall is flatter.  The deep rims around the main dial and the inset center section are gone, replaced with simpler shapes.  I believe the numbers are bolder too-- but that's hard, even with pictures, to verify.  The three outer sections of the main dial are also more clearly sectioned off from each other.  Most helpfully, we've gained a white line on the rated range bar-- the single biggest improvement to my eyes.  On the old bar graph the edge of the charged status could be hard to pick out as the bright green of a full battery turned into the sickly yellow of a nearly empty one.

Every change Tesla makes to the fleet results in a firestorm of debate and Monday morning quarterbacking.  Just as I've laid out my case for why the original graphics looked better, my wife strolls past and tells me that I'm wrong.  Granted, this is not an unusual occurrence, but in this case I was a bit surprised.  My assumption was that women would be most disappointed to see some gilding removed from the lily-- but as she put it:  the primary job of the instrument display is to convey information and now it does it in a clearer manner than before.  It's just easier to read at a glance.

I will reluctantly concede the point.

But I still miss the old graphics-- at least up until the moment I see the orange needle fly up!

Check out my video "tour" and discussion of the upgrading process and what it has to do with a leaky toilet-- oh yes, there's a toilet cameo!