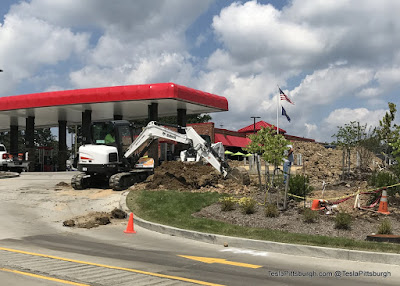 As one of our sharp-eyed local Tesla owners put it, "That looks familiar."  ANOTHER Supercharger location found and under construction in western Pennsylvania and-- you guessed it-- it's at ANOTHER Sheetz.  Elon, you gonna come get your MTO n'at?? 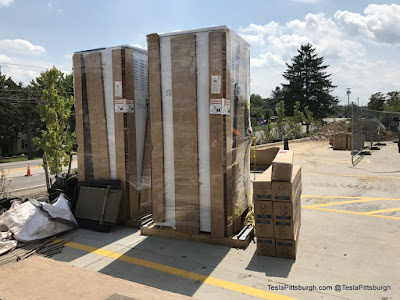 The Sheetz on the corner of Wexford-Bayne Road and Nicholson Road is just a few hundred feet from I-79 and less than 5 miles from where the highway splits into 79 and 279 approaching Pittsburgh from the North.  It's yet another diamond in the Supercharging crown Sheetz and Tesla are putting around Pennsylvania's highways. (You can find the rest elsewhere on this blog.) 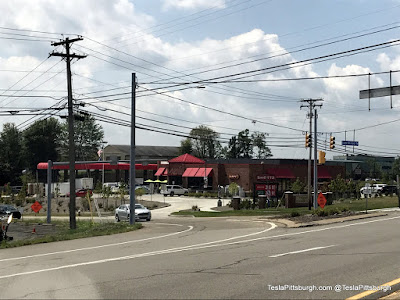 The store (number 617, according to Sheetz) just opened a few months ago and features all the latest and greatest amenities.  The location amidst suburban housing plans and office buildings means there's always a lot of traffic at this location. 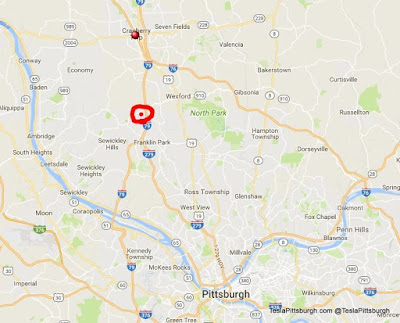 On this area map from Supercharge.info, you can see the red dot for the current 6-stall Cranberry Supercharger along the top edge.  The city of Pittsburgh is on the lower edge.  The new Wexford Supercharger (I'm assuming that's what Tesla will call it) is at the exit closest to the 79/279 split, allowing for easy use by travelers to/from the city as well as those who are trying to bypass it.

Effectively, this will split traffic at the Cranberry Supercharger.  Turnpike travelers would still find that as their best option, but travelers on 79 will use the Wexford Supercharger simply because it has much better proximity to the highway than Cranberry's. 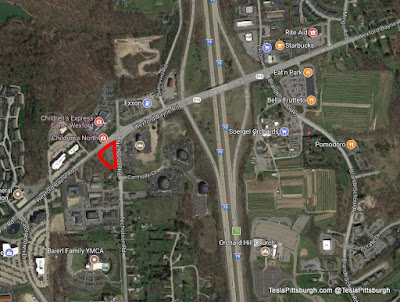 The store is so new that it doesn't even appear on the Google Earth views yet.  Located on the western side of the interchange, the Sheetz is just a couple traffic lights away from all travelers.  There are several other eating options nearby and a hotel.   Three of the property's corners have entrances, so you can pick the one closest to you... or which is fastest depending on how you catch the traffic light. 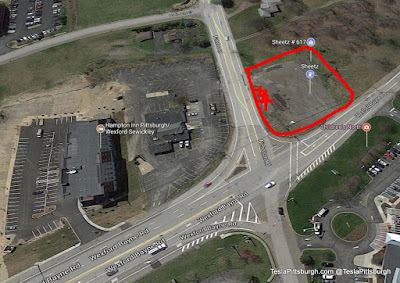 The hotel is also brand new, a Hampton Inn that is easily walking distance from the Supercharger.  I suspect this could be a usable home base for visitors to Pittsburgh.  The commute is pretty easy, about 15-45 minutes to the city depending on what time you've decided to attempt it and whether or not there's construction.  Okay, let's call it 30 minutes to downtown MOST of the time. 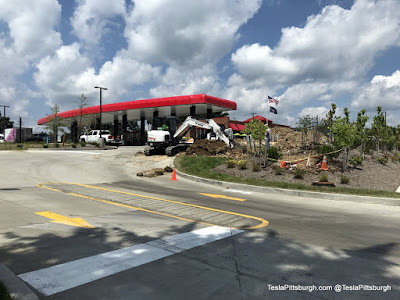 Looking at the southern Nicholson Road entrance, the Superchargers are located along the roadside.  When complete, the glowing red "TESLA" name should be easily spotted by all motorists passing by and a great advertisement for the network. 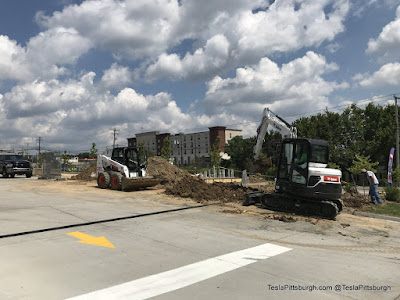 The utility connections are being trenched this week, with the enclosure appearing to be placed on the entrance corner. 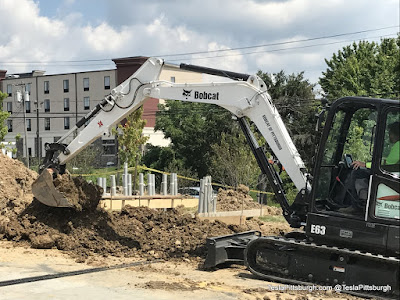 The overall size of this Sheetz is fairly compact for the amount of traffic it gets, so the construction crew is pretty tightly hemmed in with where they pile up their dirt. 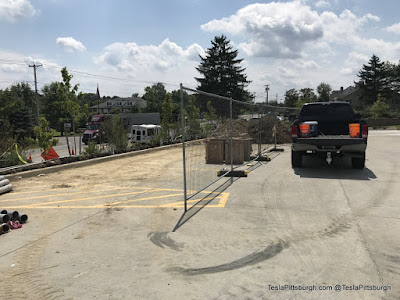 Counting the conduits in place and estimating the ones hidden from view, this appears to be an 8-stall configuration.  I can't imagine there is room for more than that without serious parking problems. 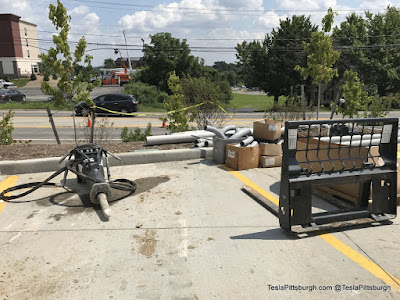 Interesting, there appears to be a LOT of leftover conduit when I stopped by.  I'm not sure if there are other stalls to be added later or if they construction crew just over-packed...  but it does leave the door open for a surprise later, if this location ends up being larger than it appears now. 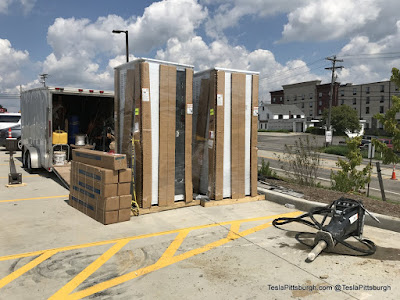 I was really hoping for pallets with "TESLA" stenciled on them like we've seen arrive at other locations, but these monster cabinets were mostly unmarked and bore no Tesla identification that would be a real "smoking gun"... but I think we all know what's going on here! 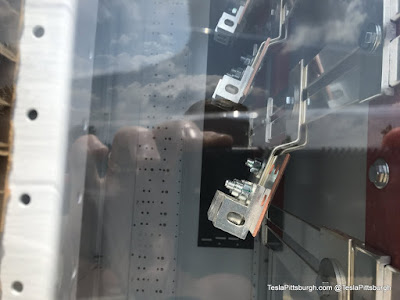 Since this new location is essentially on my commute, I'll be stopping by more frequently to monitor the progress and, of course, put the word out as soon as it gets powered up.  I could actually use this for all my charging (as some owners do), but as nice as the Sheetz is, I'd rather put my feet up at home and charge overnight.  Still, it'll be handy to have to pre/post-trip top ups. 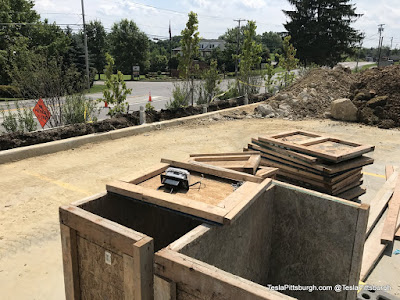 The biggest issue with this location will be parking.  Whereas the Cranberry Supercharger lurks behind a hotel and far from the door where it is essentially immune from being ICEed, these stalls are directly across from one of the main doors to the Sheetz. 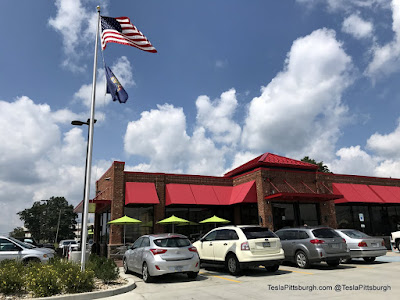 When you factor out the spaces closest to the door (which are handicapped), that doesn't leave a lot of other parking spaces.  I suspect ICEing will be a major concern with the spots and probably won't be helped by ambiguous signage that other Sheetz locations have with regards to short-term parking for ICE vehicles. 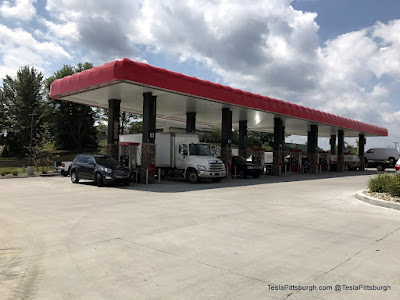 It's encouraging to see a major service station company getting bullish about the future of long-distance electric travel, but whether it be zoning limitations or a hesitancy to tow customers' vehicles, the biggest challenge to Sheetz becoming beloved by Tesla owners will be how they manage the inevitable ICEing disputes.

After all, it's not like we can all go park at the pumps and still make it to our destination!