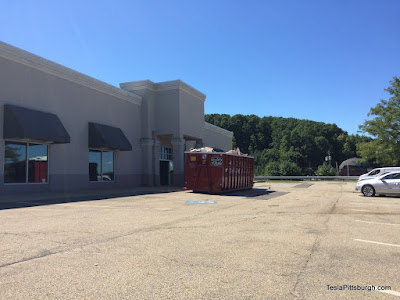 Before you can create, often you must destroy.  The former Ethan Allen in Wexford is becoming the Pittsburgh Service Center and I stopped by to take a look at how things are progressing,  Much to my surprise, a large crew was hard at work over the holiday weekend!

I first broke the news on Teslarati back in July, and in my last post I laid out Tesla's plans for the Pittsburgh Service Center with more locally relevant details.

After Cars & Coffee this morning, I decided to swing by thinking perhaps I'd see something through the store windows.  As I rolled up, a young man was taking a smoke break and when I asked if things were going well the conversation immediately turned to my Tesla.  He was astounded at how big the touchscreen was and it soon became clear he'd never seen one up close. 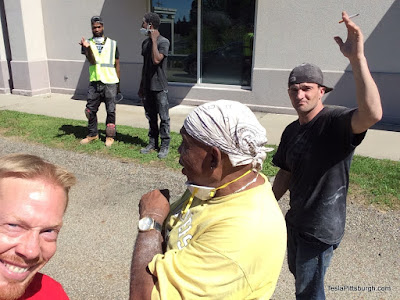 Then a crowd gathered.  Workers began pouring out of the building and appearing in the windows.  I didn't get a head count but it looked like a crew of about 10 guys were dropping tools and coming out to learn about the car.

With a strong sense of nostalgia, I popped open the frunk and hatch and began answering questions about costs, charging, range--  all familiar conversations that I'd thought were only memories.  Phones were popping out and selfies getting taken-- so somewhere online are more pictures!  If anyone finds them, drop me a note in the comments.  I got the impression this crew was mostly from the South Hills area.

Even more surprising to me, they were the demolition crew but they didn't realize what the project was they were working on!  I hope seeing a Tesla up close helped to make the holiday weekend go a little faster for these guys.  After 10-15 minutes of chatting about the car and Tesla's plans for the building, they took their lunch break (apparently I'd caused it to be moved up a little-- Sorry!) 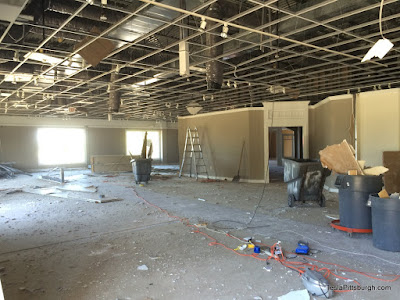 As we all left, I took a couple quick pictures inside.  You can see the dumpster is filling fast as the former furniture showrooms fake walls are pulled down, pulverized and discarded.  The ceiling is also being systematically dismantled. 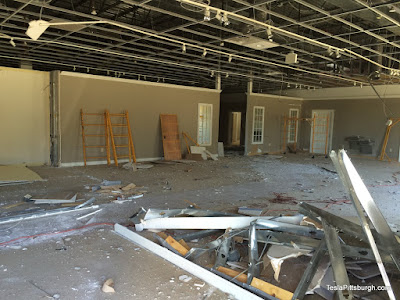 From the looks of it, the front half of the building is mostly cleared, but they still have quite a lot of work to do to fully gut it.  I don't see how reconciling Tesla's construction blueprints can require anything less than a completely blank canvas. 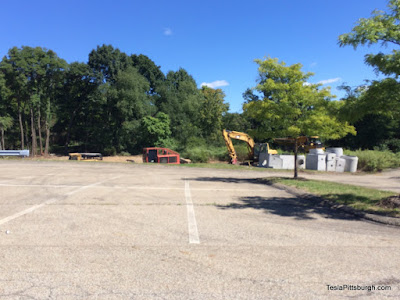 Out back behind the building, work on the retention pond seems to be underway.  There wasn't a crew working on that part of the project, but heavy equipment and concrete drain segments were in place and the dirt was churned up pretty good.  Eventually there will be new parking areas back here.

Amusingly, the local Jaguar/Lexus dealer down the road had a lot of inventory parked just over the property line in the same parking lot.  That'll make for an interesting contrast when Tesla finally has inventory to park here too. 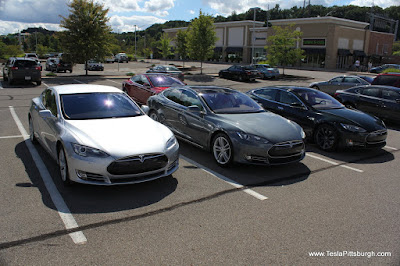 I've been working on another massive project for Teslarati for about a month now.  I can't tell you what it is, but I can tease you with this picture of a small test fleet I assembled to help me with my research.